NGC 5529/FGC 1735 is a massive flat galaxy with a warped disk in Bootes about 140 million light-years from us. At that distance, it is a bit over 250,000 light-years across, twice the size of our galaxy which is a big one. Thus it met two criteria I use for finding targets, a member of the FGC catalog and distorted. It should remind you of the Needle Galaxy NGC 4565 and NGC 128 though there are some major differences. NGC 4565 has a round central bulge while NGC 5529 has a box-like core with 4 \"points\" much like NGC 128 I ran October 1st of this year. Also like NGC 128, both arms are warped in the same direction while with NGC 4565 the arms are warped in opposite directions and only at the very ends. It does have the strong dust lane and coloring of NGC 4565 while NGC 128 had neither but did have the most obvious box or peanut core I know of while it is rather subtle in NGC 5529. The \"points are rather hidden on the northern side unless you look for them. NED and the NGC project class it as an edge on Sc galaxy. One paper says it is exactly edge-on though to me it appears a few degrees away from that as the dust lane is a bit north of being centered and the northern \"points\" of the box are mostly hidden behind the closer structure of the galaxy while the southern points are seen against the black background sky. It was discovered by William Herschel on May 1, 1785. It is in the second H400 program.

A box structure is usually indicative of an interaction with other galaxies, usually from digesting a companion or two. NGC 5529 certainly has some dwarf companions but none appear large enough to warp a galaxy of the massive size of NGC 5529. So I\'m going out on a limb and say the warping is due to galaxies it digested long ago creating the box-like core. In the annotated image I\'ve noted the true companions by showing their catalog name as well as a redshift distance in the 140 to 150 million light-year range. The differences are due to orbital motions about the group rather than actual distance differences. Note three of the 4 companions are very small, IKPM 1, IKPM 2 and Kregal B with MCG +06-31-085a being larger but very diffuse and low density. There are other galaxies \"near\" NGC 5529 but they are much more distant and thus not true companions. I found several images of this galaxy claiming KUG 1413+364 was a companion. Sure appears likely but the redshift shows it to be more than twice as distant. Appearances can be very deceiving. Note \"nearby\" galaxies over a billion light-years away are larger in apparent size than some of its true companions. The star-like feature in MCG +06-31-085a is composed of two blue knots of stars in the galaxy that nearly overlap. My resolution is not sufficient to separate them. In any case, it\'s not due to a foreground star as it might appear.

To the east of NGC 5529 is a small galaxy group at a distance of about 890 million light-years. One member of the group is highly distorted, MAPS-NGP O_271_0108262. I\'ve included it as an inset in the cropped and enlarged image. The apparently closest galaxy to the south has no redshift. While appearances can be deceiving I\'m going to assume it is likely the cause of the tidally distorted arms on the galaxy to its north.

I often come across galaxies missed by NED. I happened across many in this image. One is right below NGC 5529. I\'ve marked them in the annotated image with a question mark. In the upper left you\'ll find three question marks in a row. This is because the three galaxies to their left are all missed by NED. Though two, (the leftmost) appear to be one in my image the Sloan image shows them both quite clearly. Most interesting is the example to the southwest where I marked SDSS J141632.42+360550.5 which is a tiny faint galaxy almost lost in the glare of a far larger and bright galaxy to its south. The big one is not in NED for some reason. That\'s often the case, faint ones picked up, brighter are overlooked. Why I don\'t know. I made no search for these. I have only noted those I happened across while annotating the image. How many more there are in the image I can\'t say. NED picks these up using automated software. It seems there are still some bugs to be worked out in the detection algorithms. 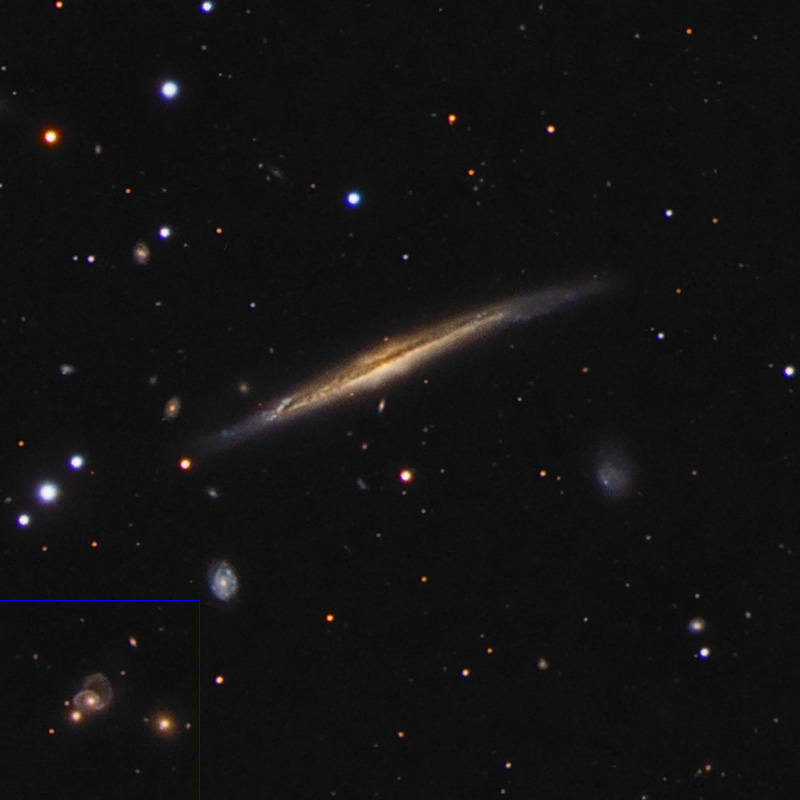 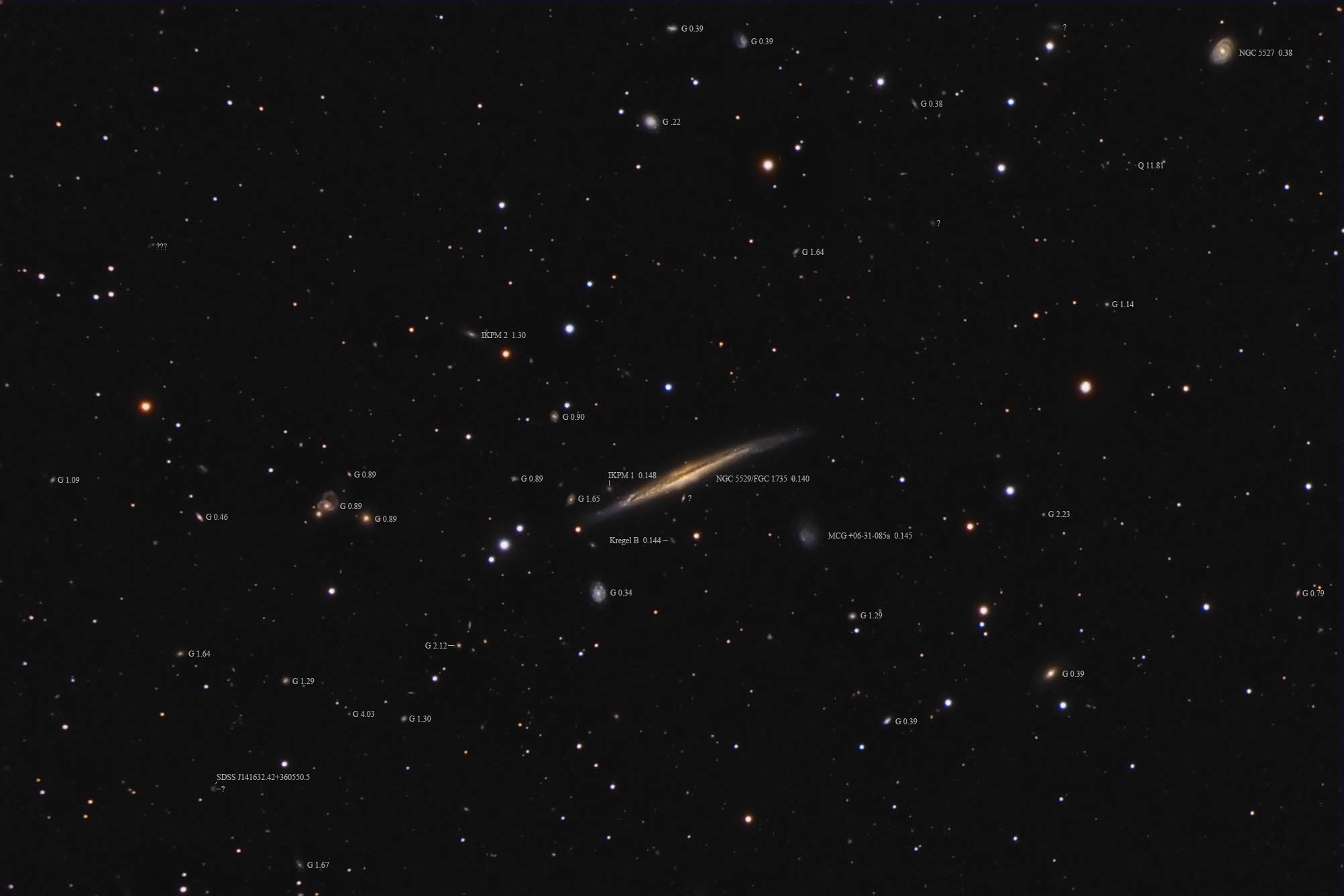 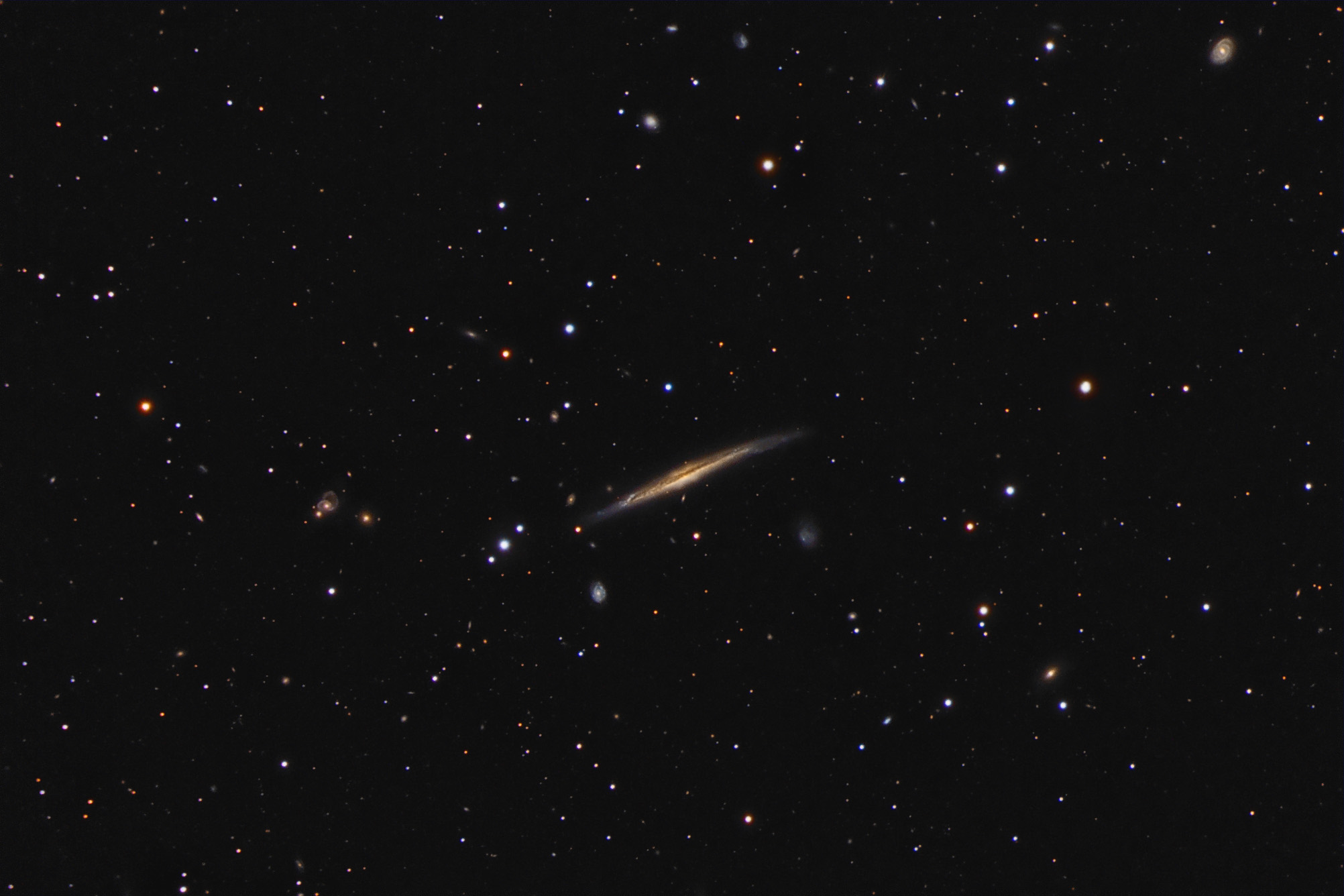