NGC 5534/Markarian 1379 is a very strange galaxy in western Virgo, almost into Libra. That may explain why a Virgo galaxy is in an area where virtually no galactic studies are being conducted. I came up nearly blank on the field but for this galaxy and its satellite. Redshift puts it at 130 million light-years though a single estimate based on a Type II supernova that was seen in 2001 puts it at about one hundred million light-years away. In any case, it lies beyond the Virgo Cluster. NED classifies it as (R\')SAB(s)ab pec with HII while Seligman says (R)SAB(s)ab? pec and lists it as being a starburst galaxy. NGC project says simply Sbab, I think they mean SBab. It was discovered April 29, 1881 by Wilhelm Temple. It was found a couple weeks later on May 17, 1881 by Édouard Stephan.

On the east side is a mess of blue objects seen against the red color of the galaxy. That is listed by NED as MRK 1379a and is described as \"Satellite galaxy projected on MRK 1379.\" I think that\'s ambiguous as to it being in front or behind the galaxy. Redshift is nearly identical giving no help in the matter. Has it been distorted by the encounter? Is it responsible for NGC 5534 being a starburst galaxy? I couldn\'t find any definite answer so will say maybe to both.

The field contains two other strange galaxies or interacting galaxies. I can\'t tell from my image. I\'ve annotated both with their catalog names. The one to the east is made up of several discrete parts as if it may be more than one very distant galaxy likely interacting or it may be simply a rather nearby irregular galaxy, possibly related to NGC 5534. Without any information on it I can\'t say though it is listed in the Galex catalog of ultraviolet sources so is full of very massive, hot stars. Irregular galaxies going through rapid star formation, as well as interacting galaxies, could both cause this.

To the west (right) is a very fuzzy galaxy likely with a plume or plumes. It has no obvious pieces, just a fuzzy patch. It didn\'t make the UV catalog but is somewhat blue in color. Again, thanks to nearly no information on this field I have no idea what is going on here either.

There were about 10 asteroids in the field that normally would have been seen but due to the bad conditions, only 4 are visible even on the raw FITS files. The brightest is at least 1.5 magnitudes fainter than it should be with lots of gaps due to total cloud cover. It is: \"(17720) Manuboccuni = 1997 XH10 -- Emanuele Boccuni (b. 1969) is a composer of new age music, many of his compositions referring to the sky. He composed The night and the stars for the discoverer. (Tombelli, M. of Cima Ekar\'s Asiago Astrophysical Observatory).\" This is in Italy if you were wondering.

Conditions for this image were horrible. I\'d not planned on imaging this night due to heavy clouds but they suddenly opened enough the software decided to suddenly open the roof and start taking data on this field. Conditions were really too poor as clouds constantly blocked the field while high clouds put a strong fog across the image. Look at the asteroid trail of Manuborccuni to see how broken it is. The other trails should be about as long yet are shorter as being too faint to record much of the time. It immediately went back on the reshoot list but bad weather prevented that. It is low so my time to catch it passed and I had to go with what data I had. Stars are very wonky due to bad seeing as well as the sudden opening lot allowing time for tube currents to subside. I amazed myself that I somehow pulled a usable image from the mess. Didn\'t help that this field is on the southern edge of the Geostationary satellite belt so I had a mess of them to remove. Fortunately, many came through when cloudy so didn\'t do as much harm as usual in this part of the sky. Still, when working with crumby data I don\'t need them as an added complication. Most were in the color frames where I only had two usable for each color adding to the work of removing them. 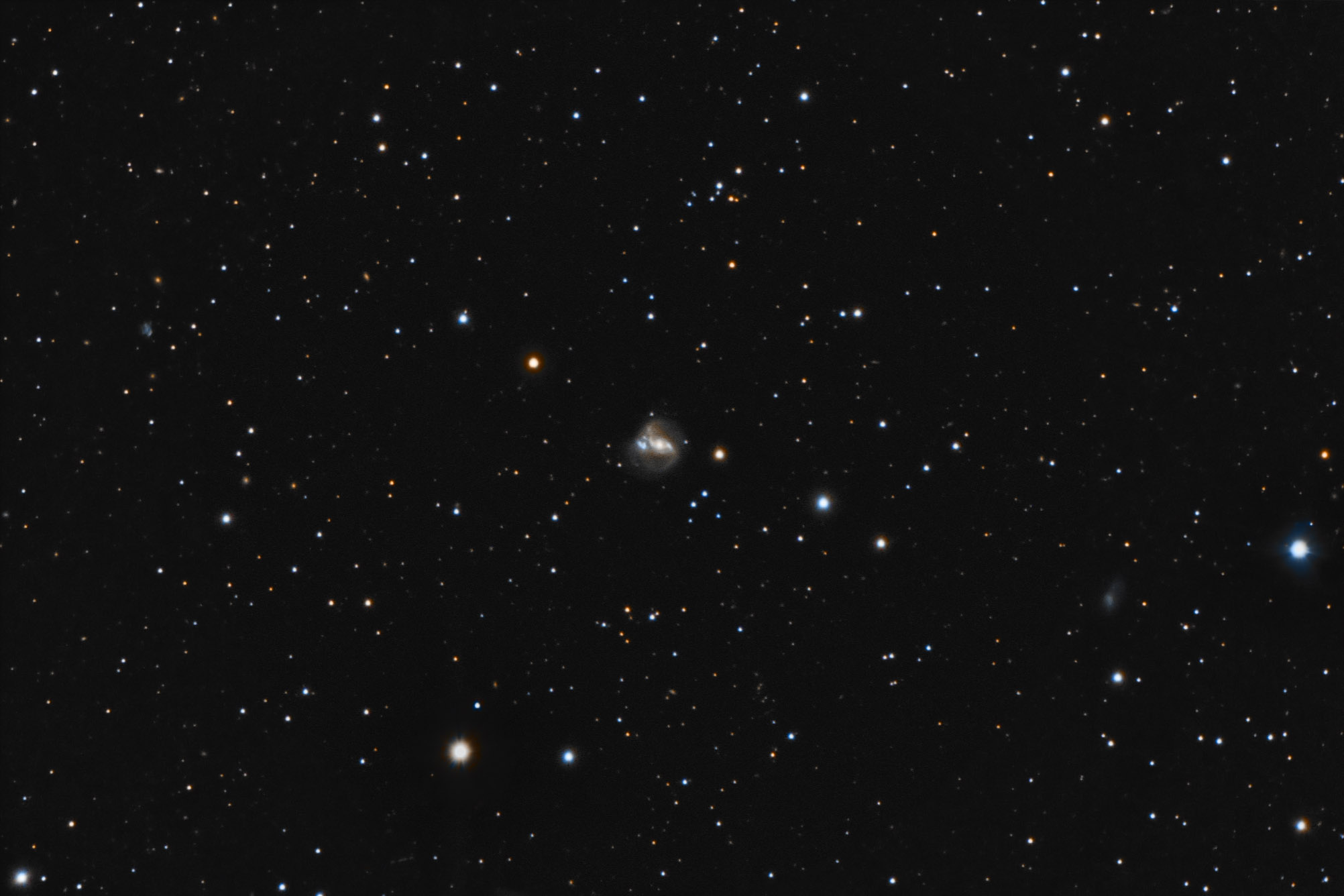 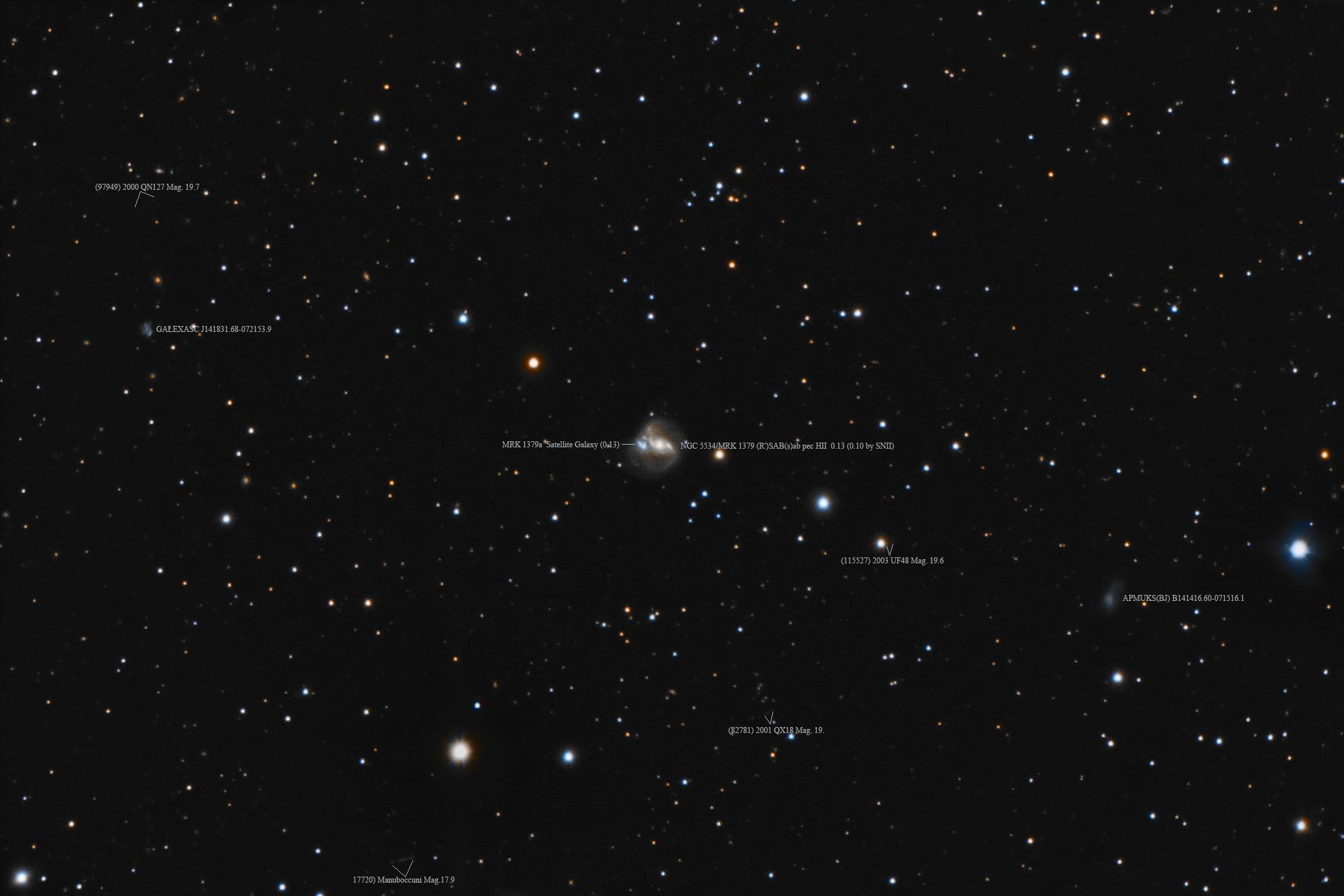