NGC 5576 anchors a small group of galaxies in northeastern Virgo about 80 million light-years distant by redshift. It is the largest and strangest of the three in my image. Classified as an E3 elliptical galaxy I didn\'t expect it to be as interesting as it turned out to be. The night I took this image was suddenly hit by northern lights which reduced my ability to go faint. I didn\'t realize this until two months later when I went to process the image and found the background as bright as if a near full moon was out. Red was hit the worst but all frames suffered. I\'d not mention this but NGC 5576 isn\'t a normal E3 galaxy. It has plumes that greatly distort the expected normal slightly elliptical shape. The main one I picked up is to the east and a bit north. At first, I thought it a donut that vanished from my optical window but after enhancing both POSS and Sloan images the donut-like loop is real. There\'s another I mostly lost to aurora to the northwest and one that connects it to NGC 5574 to the southwest. That too is mostly lost on aurora fog. I found little on these plumes. The latest note at NED even says \"NGC 5576 has a prototypical E4 morphology of average compactness.\" But another note from the same year says \"NGC 5576: This boxy E displays a peculiar envelope with marked twist and important asymmetries. This envelope is also well above the r^1/4^ law.\" You\'d think they were looking at two different galaxies.

NGC 5574 to the southwest seems in a plume and may be the cause of all the plumes about NGC 5576. If they are at the same distance as their redshift indicates their projected separation is only 64,000 light-years. I measure NGC 5576 at 92,000 light-years and NGC 5574 at 38,000 light-years. That puts them closer than the diameter of the larger galaxy. I suspect their distances aren\'t equal so their real separation is greater but the plumes argue that they were close at one time.

NGC 5577 is a nice spiral but we see it rather edge-on limiting the detail we can see. Still, it is a pretty galaxy. I measure its size at about 78,000 light-years. I see no hint it has interacted with the other two even though all three have similar redshift values.

NGC 5577 was discovered by George Stoney on April 26, 1849. The other two were first seen by William Herschel on April 30, 1786, 63 years earlier. NGC 5576 is in the original Herschel 400 program. My notes from that on May 17, 1985 with my 10\" F/5 on a fair night due to high humidity at 120x reads \"Medium sized, nearly round galaxy with a bright core. 13th magnitude star on the northwest edge of its halo. Nearly overlaps NGC 5574.\" I don\'t know how to interpret that. Was I seeing the full extent of the plumes in all directions? That\'s about the only way I\'d say the halo nearly overlaps NGC 5574? I suspect I just meant I saw the galaxy without the distorting plumes and was just taken by how close they were together. Still, I need to take another look with that scope. It is set up in my observatory though rarely used.

Many galaxies I\'d normally have included in the annotated image were lost to the aurora. Only about half were visible in the FITS stack and even fewer made it to the final image. I\'ve put it back on the to-do list for another try but with so many on the list never taken I don\'t know when that will happen. 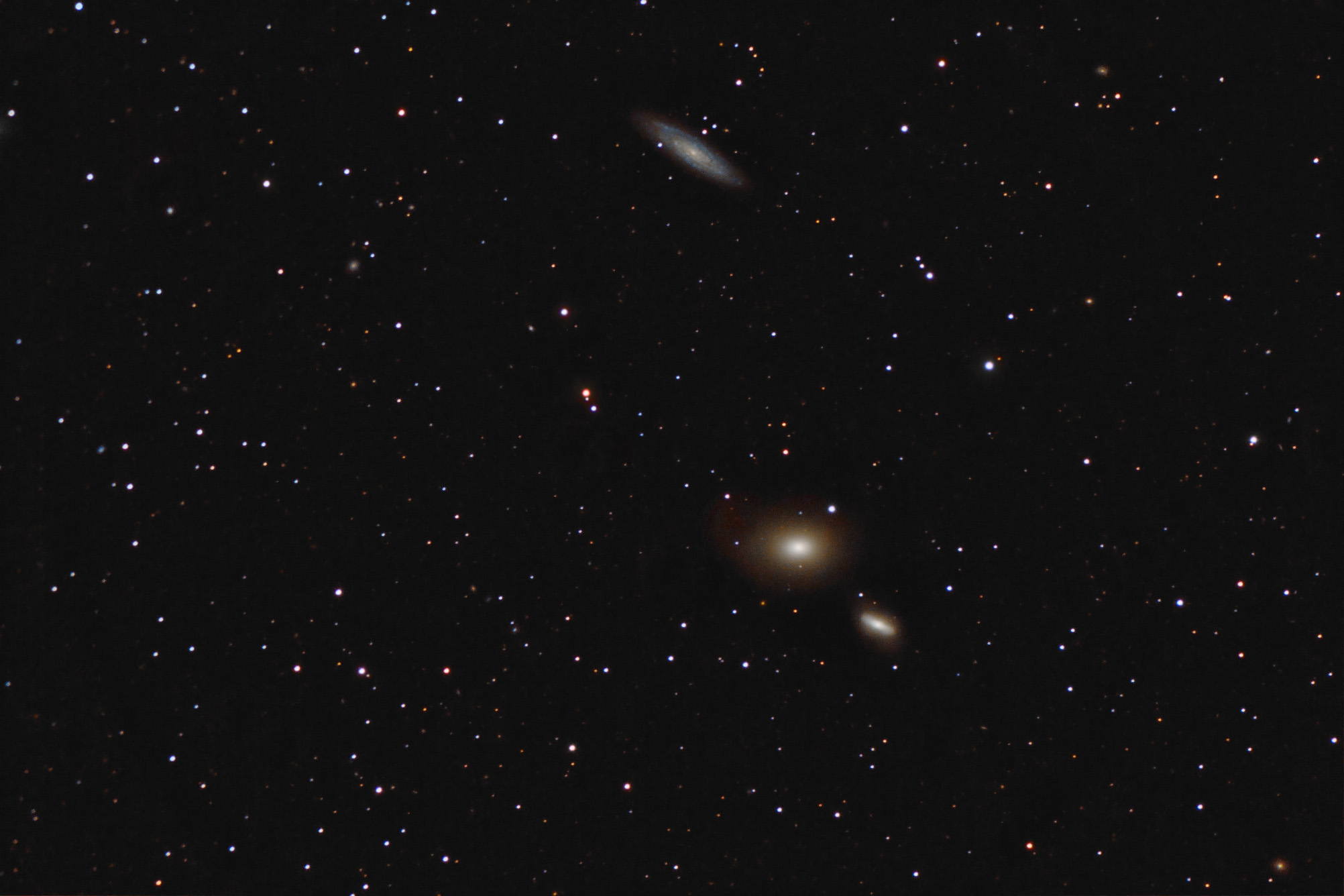 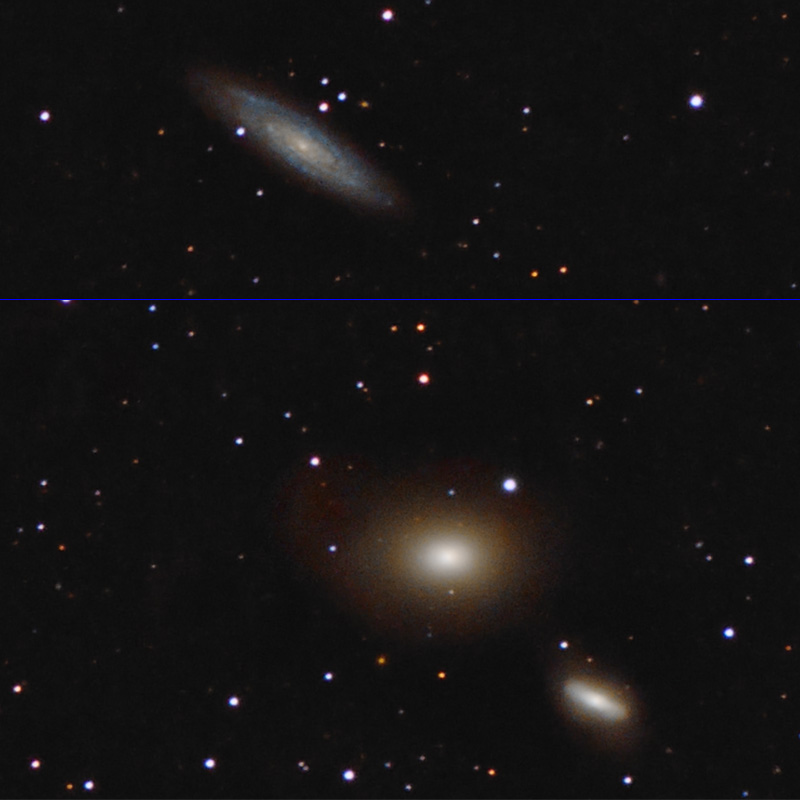 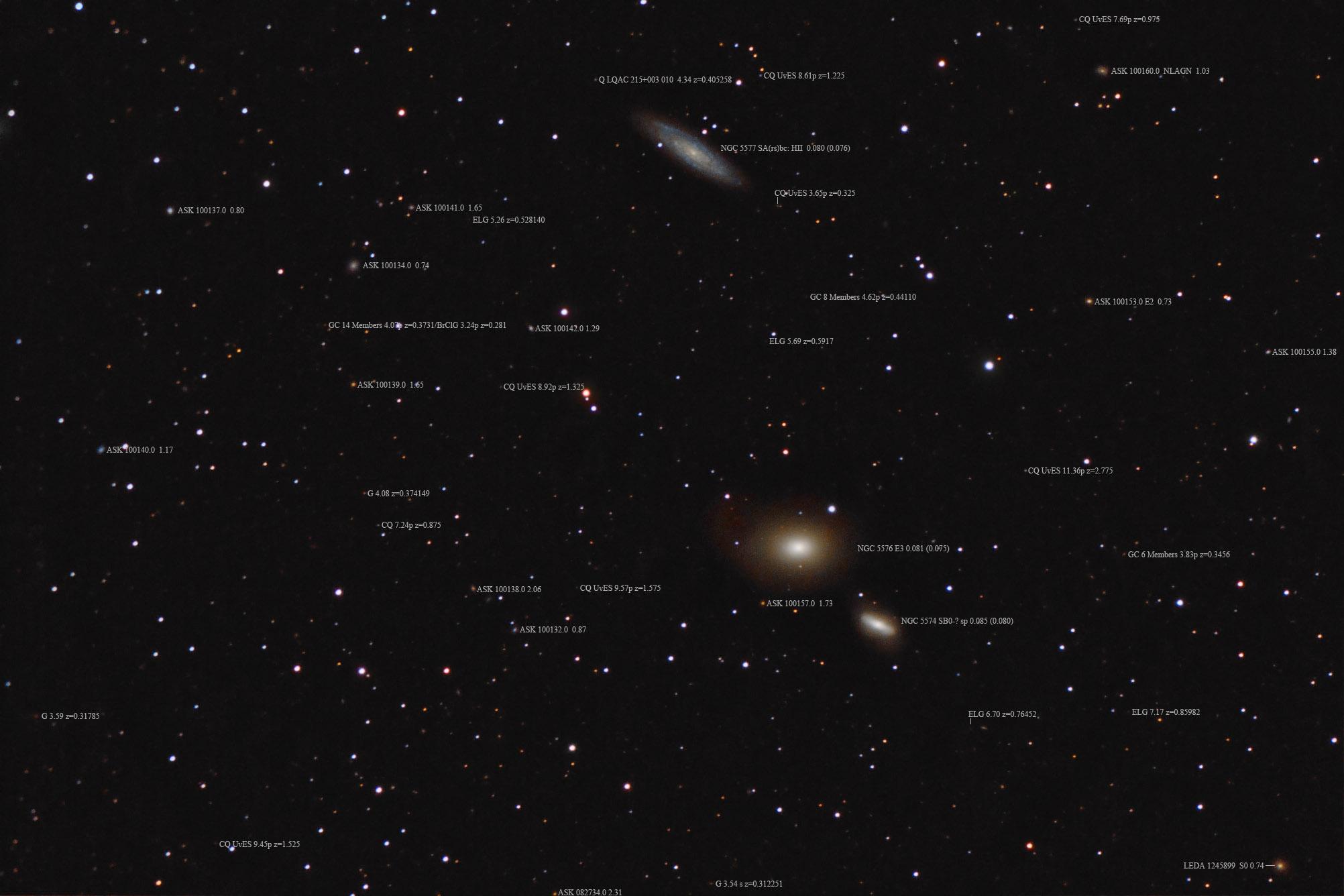