NGC 5584 is a rather low surface brightness galaxy in western Virgo 80 to 90 million light-years distant that is just about on the celestial equator. It is another spiral that at first appears rather normal then on second look is rather strange. The northern third is mostly a flocculent spiral in that the arm structure is just a bunch of bright knots in no real pattern. The lower two-thirds has spiral arms but they are strange. The northern arm coming from the core is indistinct and rapidly widens into just a bright region that has little structure. The southern arm is normal looking but then curves north becoming the disorganized jumble that is the northern part of the galaxy. A second southern arm stars from between the two arms and other arms begin and end apparently at random locations. One object I took to be a star knot near the southernmost end of the galaxy is listed in NED as a separate galaxy but with a redshift very similar to NGC 5584. I can\'t see it as anything but a star knot in the galaxy but it is shown on the annotated image. It was discovered by William Temple but the date is lost to history. It was also seen by Edward Barnard on July 27, 1881.

Conditions were very poor for transparency the night this was taken. The image doesn\'t begin to go as deep as normal. Still, it shows some rather distant and obviously very big and bright galaxies and quasars. One object puzzles me. It is listed at NED as a Rejected Quasar Candidate (RQC on the annotated image). It is southeast of NGC 5584. It shows a photographic redshift of 2.885 which would put it\'s look back time at over 11 billion years. Seeing something at that distance would seem to require something as bright as a quasar yet it is not one. I can only think the photographic redshift is quite wrong for some reason. Note it is the faint starlike object just west (right) of a much brighter star. The two are only a couple seconds of arc apart so it is difficult to see them as separate objects. Southeast of it is GAMA 744799 which NED lists both as a Seyfert 1 galaxy and a quasar at 4 billion light-years. I didn\'t think a galaxy could be both at once so not sure what the significance of this is. NELG refers to a narrow emission line galaxy and ELG just an emission line galaxy (normal line width)

One asteroid is in the image. Note how the trail fades as it moves to the northwest. Even at its brightest, it is much fainter than an 18th magnitude asteroid normally appears in my images. This shows how conditions started poor then went downhill during the image capture. My usual routine is to catch objects when near the meridian. This gives me time to catch 1 red, green and blue frame along with two luminance frames then flip to the other side of the meridian and take the same 5 frames in reverse order. But after the two luminance frames on the west side, I stopped and took the remaining three color frames another night. I should have redone the luminance but that night wasn\'t a lot better than the first one so didn\'t bother. 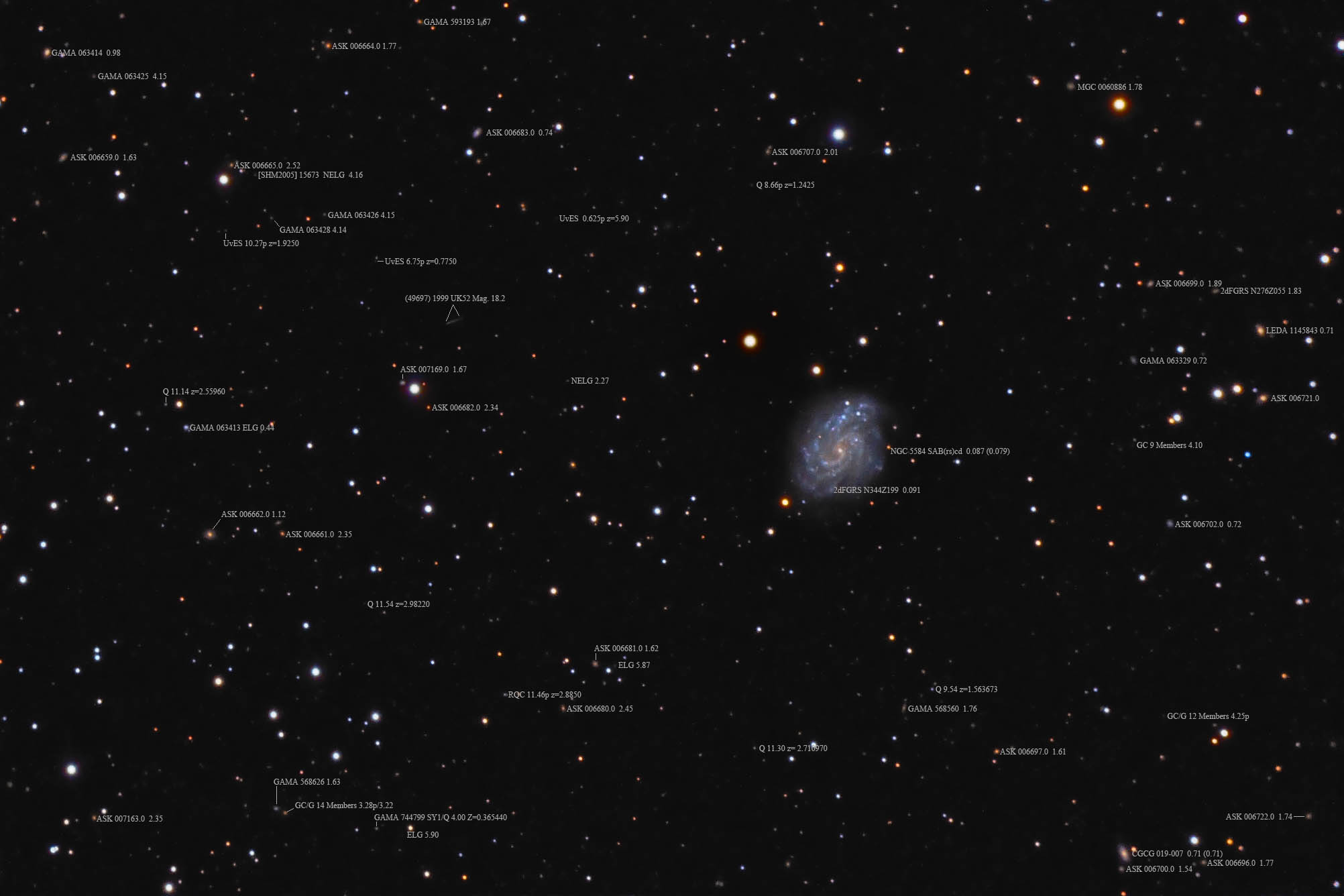 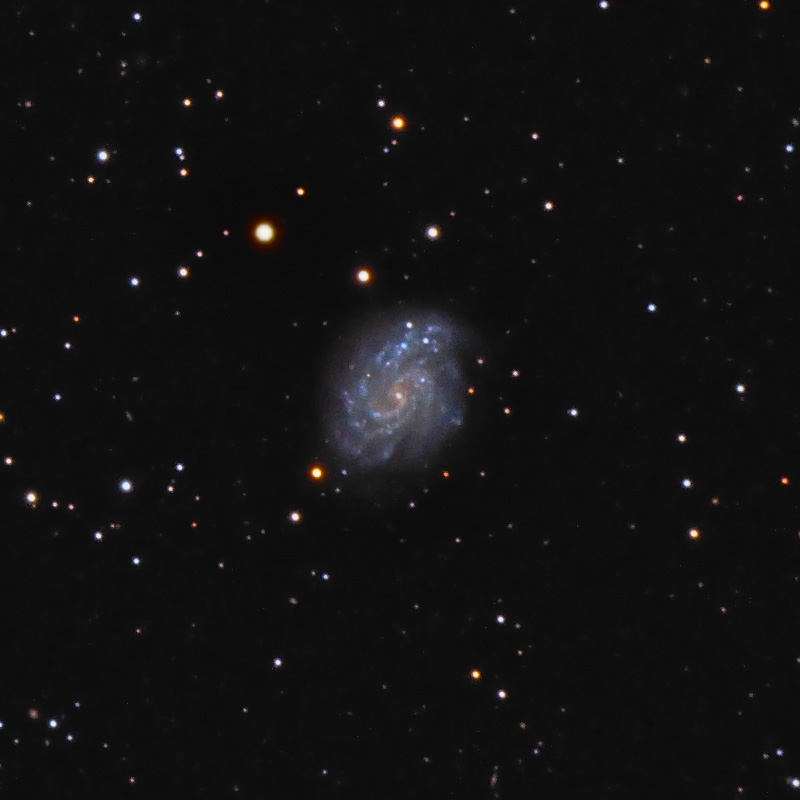 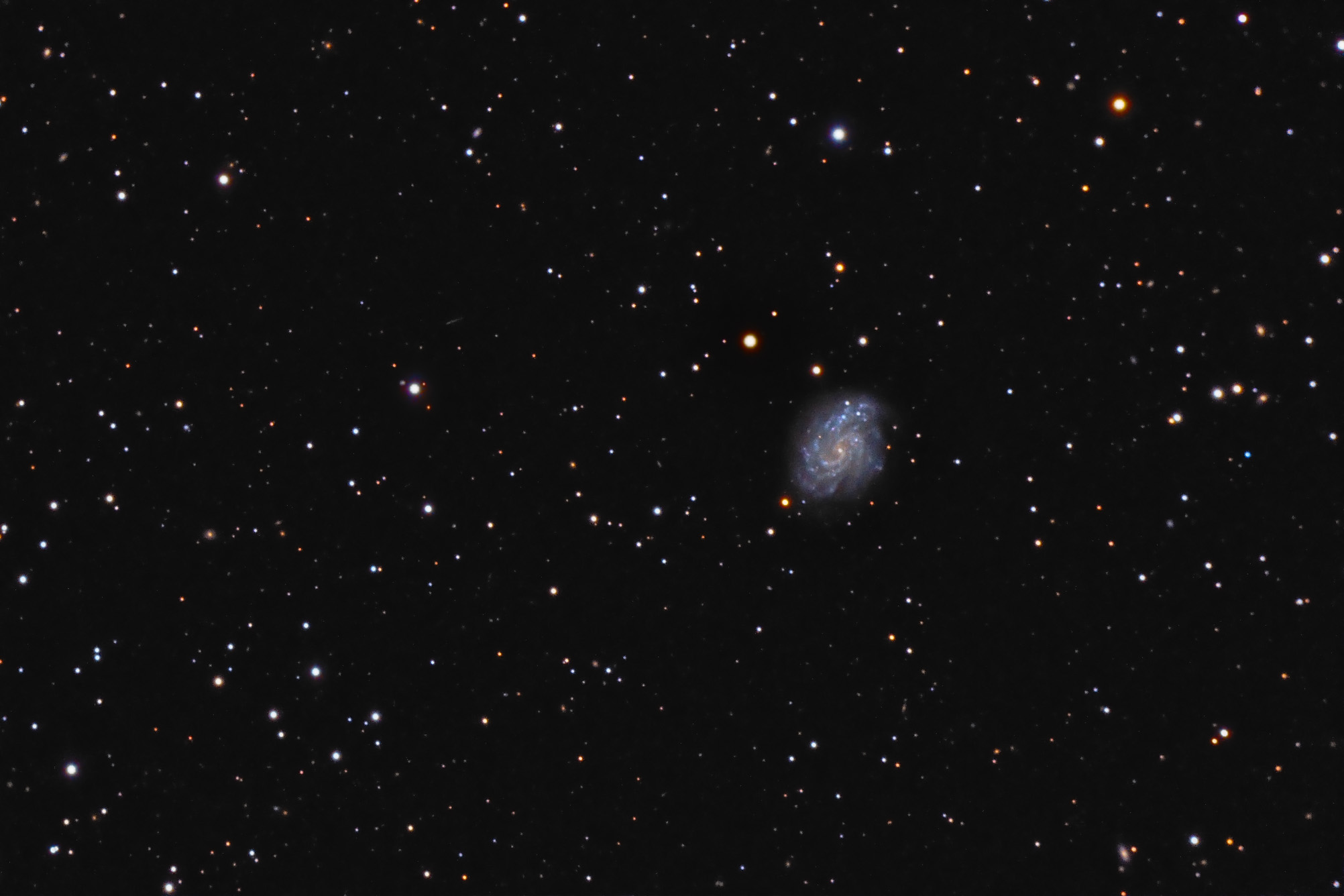