As you should know by now I\'m fascinated by flat galaxies, those with little to no central bulge. The Flat Galaxy Catalog contains the strictest rules for what it considers as flat. Less strict is the 2-micron survey\'s flat galaxy catalog. I search both for good targets. When the 2MFGC came up with 2 in the same field and they were big and bright NGC and IC galaxies I had to put that field on my to-do list. When I took the field I centered on the bigger and brighter of the two assuming it was the NGC galaxy and gave that name to the field. The Sky working with CCDSoft names the subs with the central object. I was more than a little surprised when it came up with that being the IC galaxy. I was sure it had screwed up. Turns out it did and it didn\'t. I\'ll save the complications for later. But it is true the IC galaxy is the bigger and brighter of the two so I\'ll start there since it is front and center.

IC 1029 is a surprisingly big and bright galaxy in the IC catalog and a rather classic rather edge-on spiral classified SAb: by NED and Sb?? by the Seligman. It was \"discovered\" by Guillaume Bigourdan on June 14, 1887 and lies some 110 million light-years distant by redshift and 140 million light-years away by other measurements. While in the 2MFGC I see some central bulge to it, more than I expected for a galaxy in this catalog. Apparently, its length was great enough to overcome the bulge as far as the catalog\'s criteria require. It is 95,000 to 120,000 light-years across depending on which of several distances you assume is correct. I\'m favoring the larger distance and size for reasons I\'ll get to shortly.

While sources give credit for finding to Bigourdan it really was first seen by William Herschel. But due to an error by John Herschel that finding was ascribed by Dreyer to the wrong galaxy. That brings us to NGC 5673 that is officially discovered by William Herschel on May 15, 1787 but was never seen by Herschel who was really looking at IC 1029. Oddly John Herschel must have seen both but ascribed this one to his dad in error. He must have seen the IC galaxy long before Bigourdan yet never gets the credit for its discovery some reason I can\'t find other than he never seems to mention it but in passing being more concerned with \"correcting\" his dad\'s error that wasn\'t an error. For more on this mix-up see the write up for NGC 5673 in the NGC Project. Edit: Since I wrote this the NGC project went down. It is now partly up and keeps saying it will return but nothing more has happened for over a year. Once up again, if it happens, then you can check it out. For now see Steve Gottlieb\'s pages on the NGC and IC at: http://www.astronomy-mall.com/Adventures.In.Deep.Space/steve.ngc.htm

Due to this mix up its difficult to put a discoverer on these two. I\'m going to say IC 1029 was really first seen by Herschel. Since the date of his entry some say is IC 1029 but he likely couldn\'t see is May 15, 1787. IC 1029 was likely discovered by Guillaume, Bigourdan on June 14, 1887. Most sources, however, stick with the reverse that couldn\'t have happened.

NGC 5673 is a much lower surface brightness spiral and bluer than its companion. Its core appears flatter to me. NED and Seligman classify it as SBc? and SBc respectively while the NGC project says Sc (no bar). I can\'t say I see one but they are so hard to detect visually in near edge on galaxies I\'m not going to take sides here. Its distance is 100 million light-years by redshift and 130 million by other means. Note the difference between the two measurements for these to galaxies is similar. Makes me think they are related having the same motion through space in our direction reducing their true distance. Hence I\'m going with the non-redshift distances here as being more likely correct. I measure its size as 72,000 to 93,000 light-years across.

There turned out to be a third 2MFGC galaxy in the image about 5 times more distant to the lower right in my image. I can\'t say it appears all that flat to my eye but my resolution isn\'t all that great either.

There are quite a few galaxies at about 950 million light-years scattered all over the field. More are on the right side than left. Though the biggest is LEDA 2352876 in the lower left. Beyond it is a very low surface brightness blue galaxy without any redshift data and only an SDSS position that I could find. It looks rather interesting but would need a lot of time to bring out its details due to its very low surface brightness. Even the core appears blue, just not nearly as blue as the rest of the galaxy. Wish I knew something about its distance.

Arp made a big deal out of fields around disturbed active looking galaxies that had quasars around them. He even developed a theory that quasars were nearby objects ejected from such galaxies and their redshift increased with their age. Really off the wall stuff that required new physics to support it. Right on the edge of crackpot but never going over the brink. But here is a field with two rather ordinary galaxies with lots of quasars around them. Several more are just off the top of my image. I wonder how he\'d have dealt with this field.

This image hit severely by an aurora. The aurora was dying down when I took a prior image but then came back to life in the middle of this one. Not as strong but strong enough to greatly hinder my signal to noise ratio. This again forced me to over-process the background to remove all the color noise the aurora added to the image. Due to how strong it was in red and green I\'m not all that sure of my color balance. I had to do a lot of correcting I normally avoid. Though all color correction as applied globally I\'m hoping it is fairly accurate as I don\'t think the aurora would be all that different across my very small field of view. 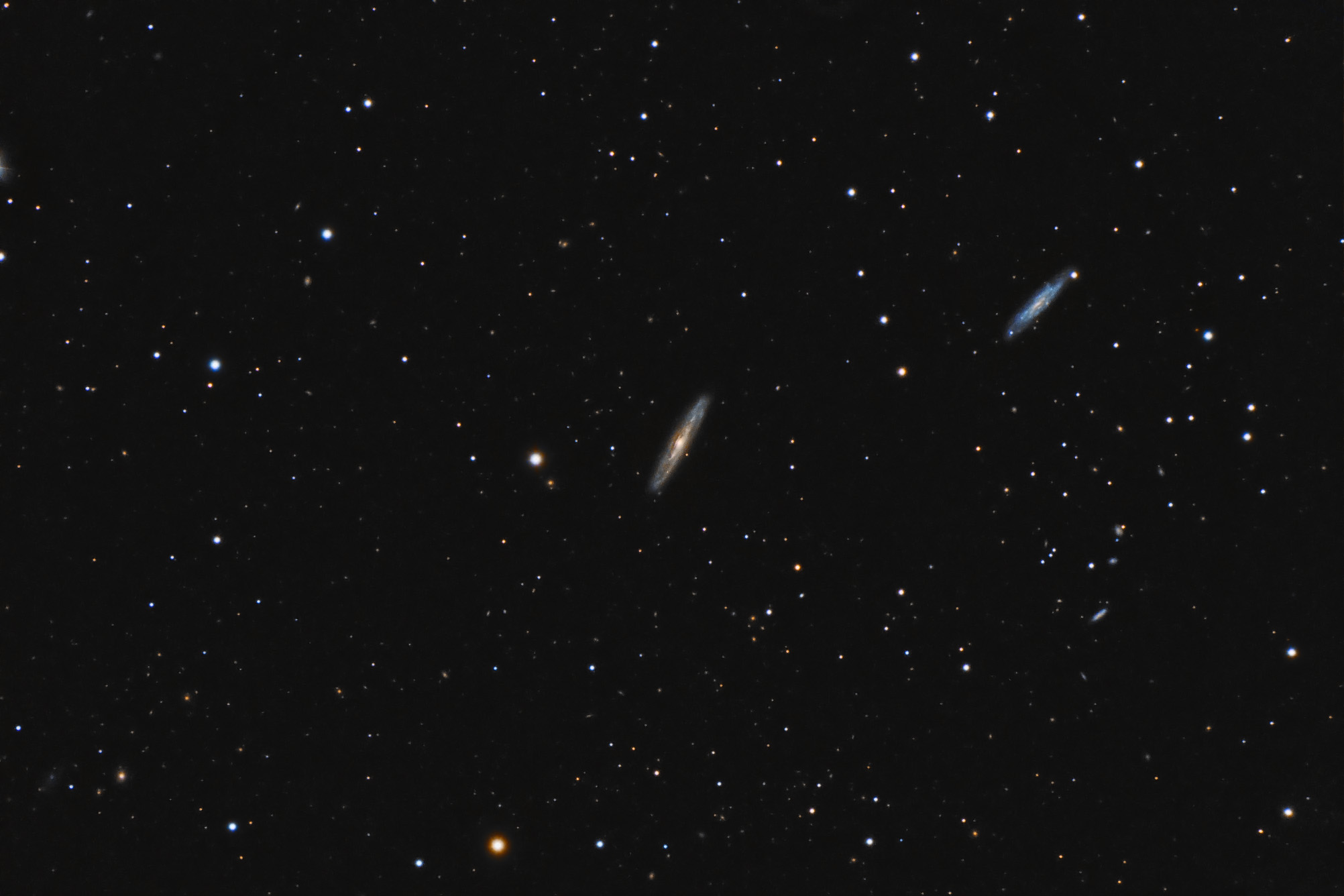 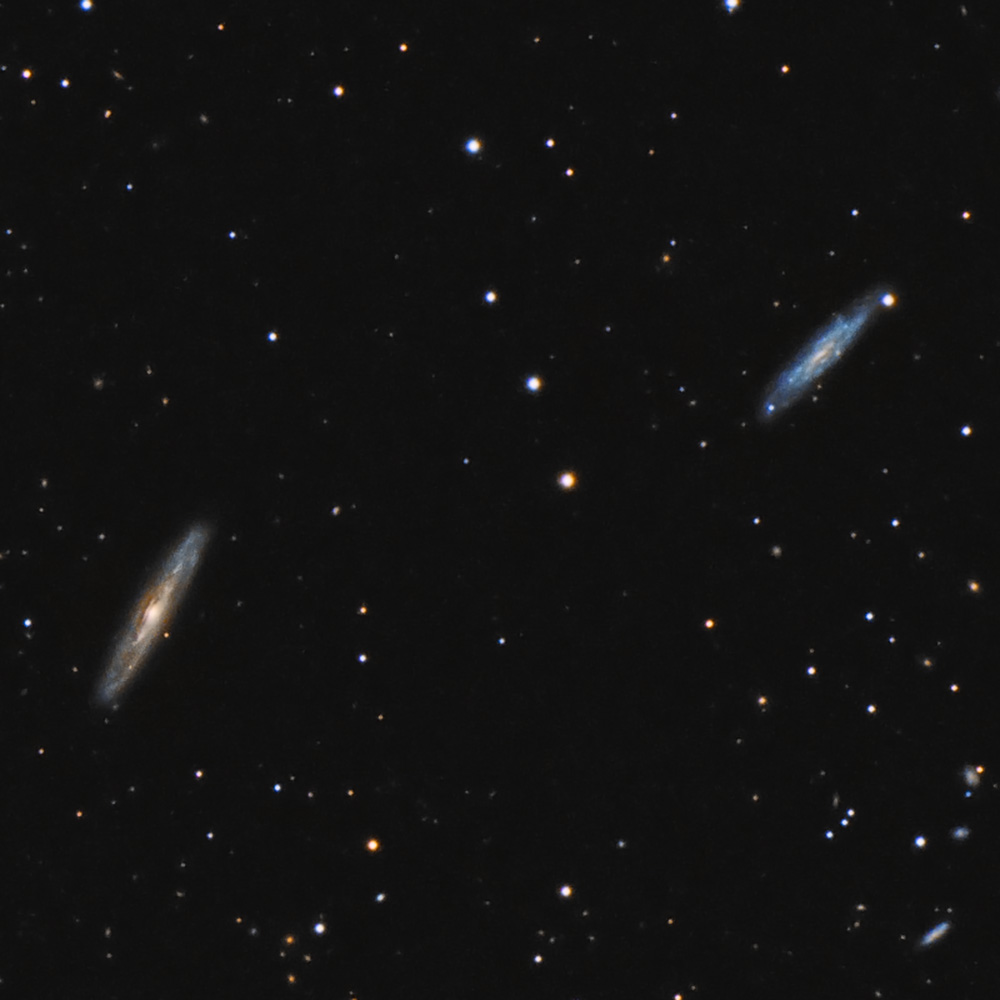 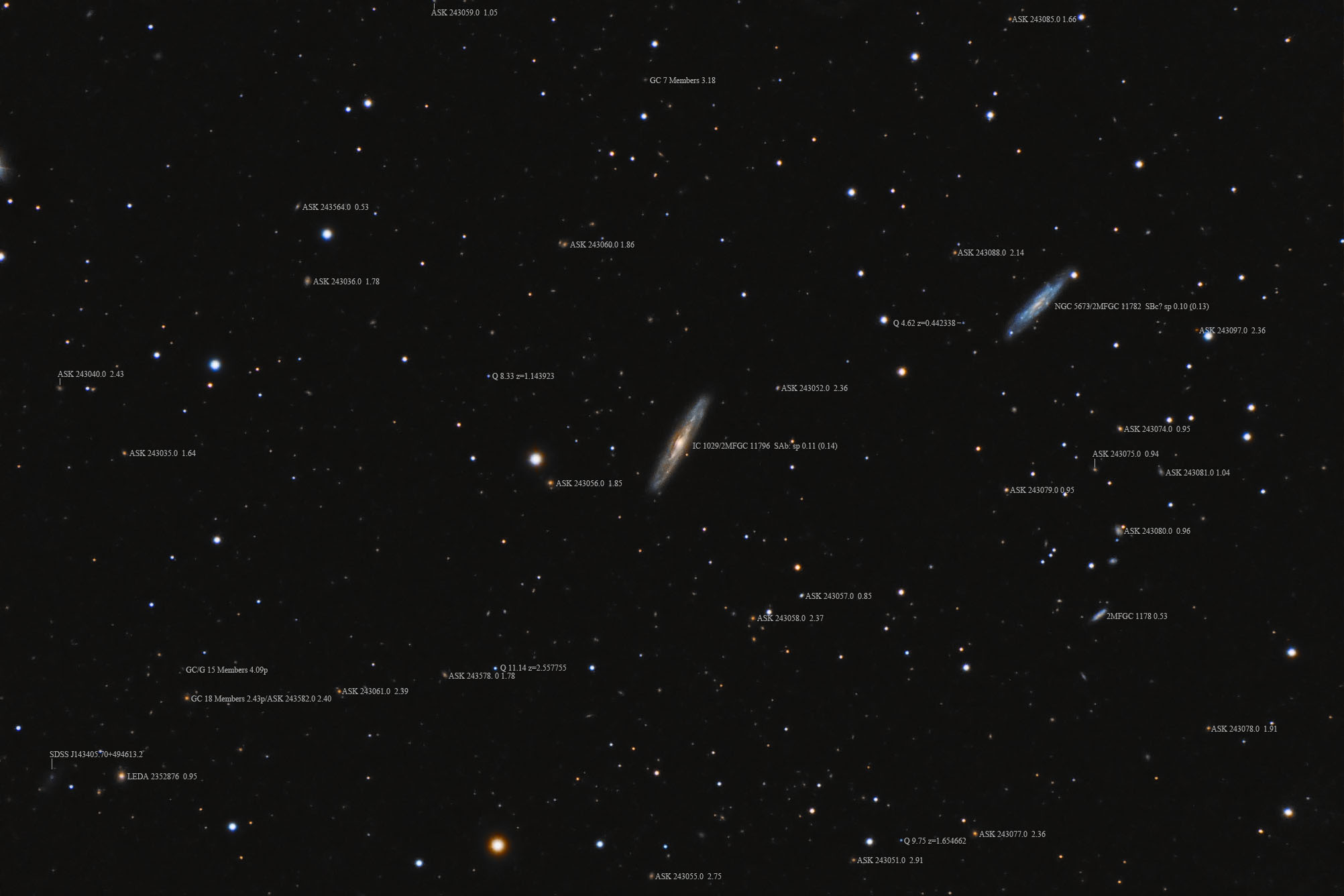