NGC 5698 is an SBb spiral in Bootes one degree east of Seginus (Gamma) Bootes. It has a rather strange ice cream cone shape with a faint drawn out arm or plume on the eastern side. Usually, such distortion is due to an interaction with another nearby galaxy. NGC 5732 is the nearest candidate with a similar redshift but is perfectly normal looking so probably isn\'t the culprit. I checked a few others in the area but they were either the wrong distance and/or undisturbed. It could be due to a merger but I found no papers discussing anything to do with its distorted shape or suggesting it has interacted with anything. So how it ended up looking like it does is still a mystery to me. If anyone knows more please let me know. Ignoring the plumes I get a size of 85,000 light-years. Including them, I get 135,000 light-years for a size assuming it is 180 million light-years from us as NED\'s redshift using the 5-year WMAP data shows. It was discovered by William Herschel on May 16, 1787 but didn\'t make either H400 observing program.

The other interesting object in my image is LEDA 097532 a pair of obviously interacting galaxies with a plume appearing to connect the two though it could be in front of or behind the other galaxy. Again, I found nothing on their interaction. They are about 480 to 490 million light-years distant. I get a size for the northern galaxy of 43,000 light years and a bit over 100,000 light-years for the southern galaxy thanks to its plumes. The projected distance between their cores is 60,000 light-years. Projected distance assumes they are equally distant from us. Since this is unlikely their true separation distance is likely larger, how much larger is the question?

While transparency was finally excellent for this image allowing me to easily go beyond 22nd magnitude and pick up galaxies NED shows at over 5 billion light-years, seeing would suddenly distort things severely. This resulted in some stars being elongated in various directions and other, often only a short angular distance away, looking normal. I can\'t recall ever having such distortion before. Very odd. 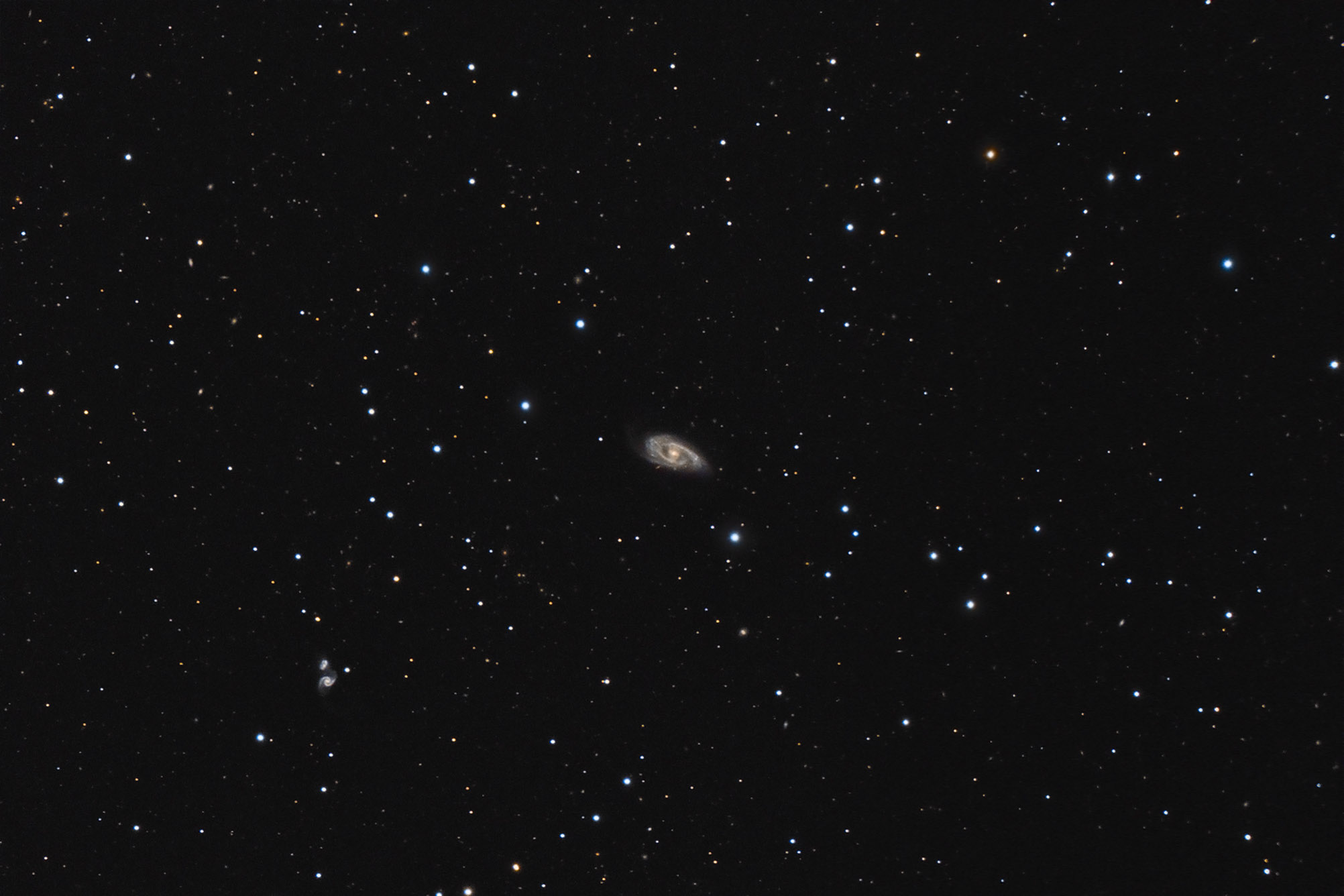 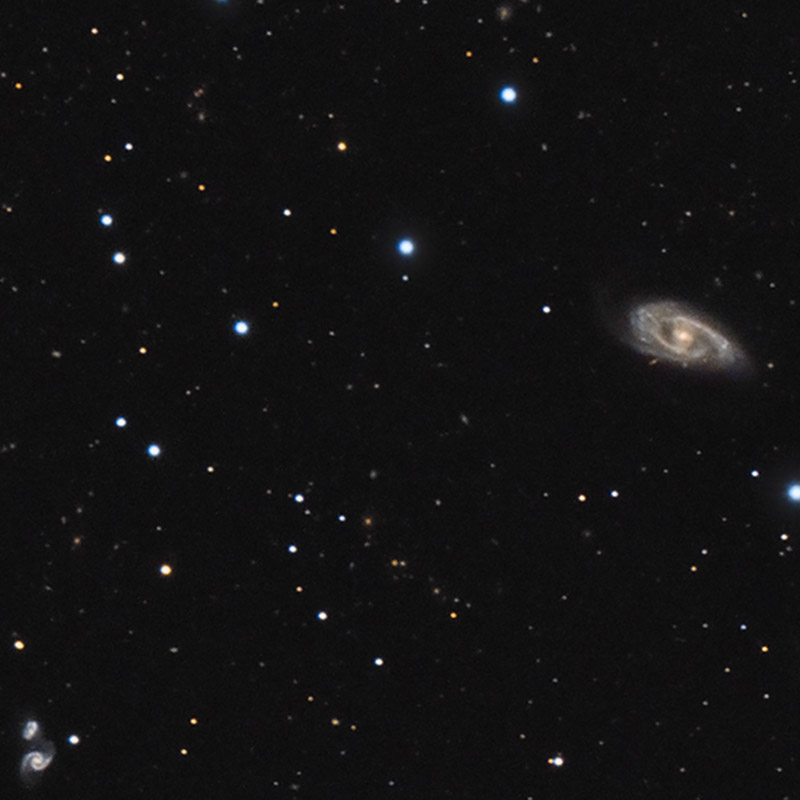 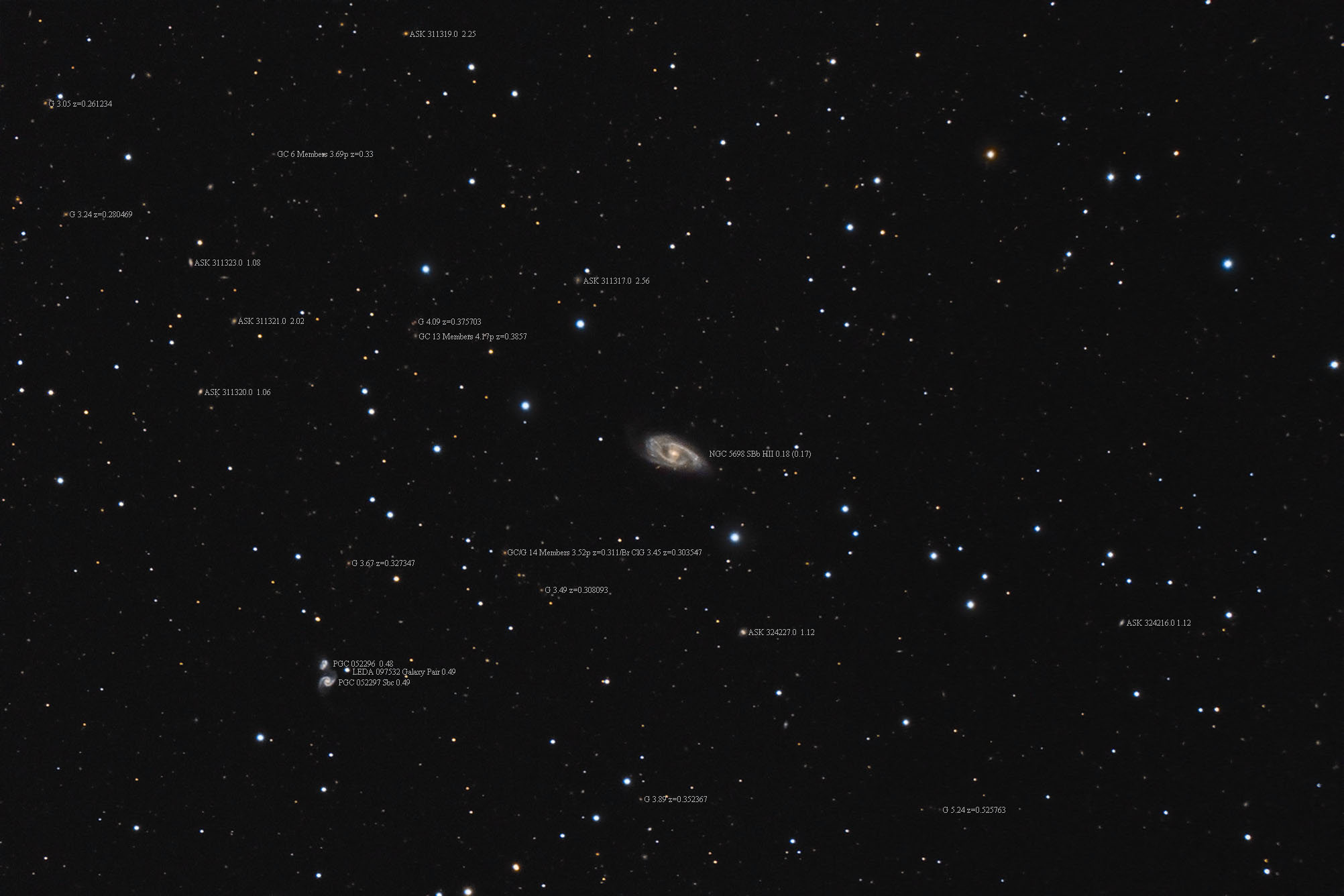