NGC 5701 is a quasi-ringed barred spiral about 80 million light-years distant in Virgo. The arms are very faint. They are quite odd in that the inner half of each arm that forms the ring is red while the center to outer half is blue. I\'ve never seen arms so segregated as to star color (temperature) before. Hot blue stars to the outside of western arm and middle of eastern and in clusters while the red streams are smooth and composed of old, cool, red stars. It was discovered by William Herschel on April 29, 1786. It isn\'t in either H400 program.

The field around it has several very distant galaxies with redshift data from the WIG catalog (WiggleZ Dark Energy Survey). The one just northeast of NGC 5701 near a bright somewhat orange star at 5.6 billion light-years is listed at magnitude 22.8 if you are wondering how faint this image goes. Slightly brighter at magnitude 22.6 is the most distant galaxy I\'ve picked up at 7.0 (6.962 to be exact beyond reason) billion light-years. To the southeast of NGC 5701 is another that also rounds to 7.0 (6.957) which is a bit brighter. All are listed as emission line galaxies.

I\'m reporting this as I researched it. I was really excited about 7 billion light-year galaxies in my image. That\'s the range of quasars. Turns out I excite easily as no sooner was that sinking in than continuing down the list of WIG galaxies I came upon WIG S15J143912038+05164280 with a z=1.059240. That blew me away. At magnitude 23.4 I didn\'t expect it to make it through the JPG process but there it was! That, by NED\'s 5-year WMAP calculations, puts it 8.023 billion light years distant! Yikes. Since this WIG survey is very limited in scope it appears likely that many of the very faint \"stars\" in my images are unrecognized very distant galaxies. This is the first field covered by WIG I\'ve imaged. There may be more in the more than a year\'s worth of unprocessed images. I just don\'t know. This one too is an emission line galaxy meaning it likely has an AGN at its core making it brighter than typical for a galaxy.

It turned out there were many dozen galaxies in the image at or beyond 6 billion light-years that were listed only in the WIG survey. As with the above galaxies, all were very dim and barely able to survive the JPG compression process. So after noting many WIG galaxies within about 5 minutes of NGC 5701 I got more choosy and only picked up those bright enough to certainly survive the JPG compression though you will likely have to enlarge the image to see some of them. Dozens are in the raw FITS file that just won\'t survive and were therefore not marked.

There are 3 quasars and one asteroid in the image. The asteroid is (7530) Mizusawa at an estimated magnitude of 16.5. The naming citation is rather long.

\"(7530) Mizusawa = 1994 GO1
Named in commemoration of the hundredth anniversary of the International Latitude Observatory of Mizusawa, established by the Japanese government according to a resolution adopted by the International Association of Geodesy in 1899 as one of the six stations of the International Latitude Service, at a latitude of +39°08\'. In 1988 the Observatory was transferred to the Division of Earth Rotation of the National Astronomical Observatory. The observations have never been interrupted, even during the two World Wars. Mizusawa is located about 500 km north of Tokyo, and its citizens show a strong interest in the observatory\'s astronomical and geophysical research. Name proposed by the discoverers following a suggestion by K. Hurukawa, who was an astronomer there during 1960-1969. Citation prepared by K. Yokoyama.\" 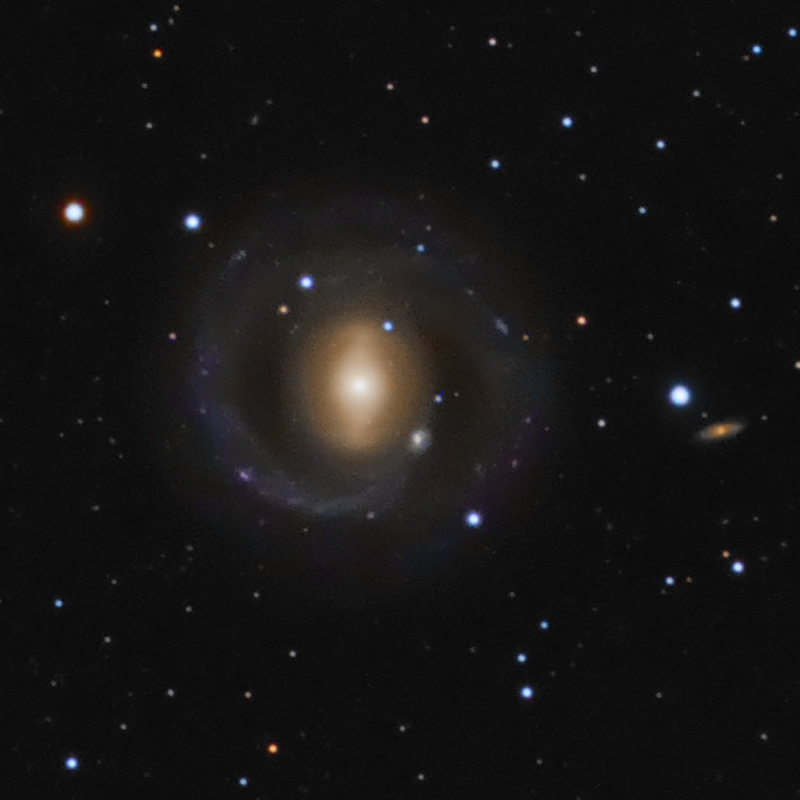 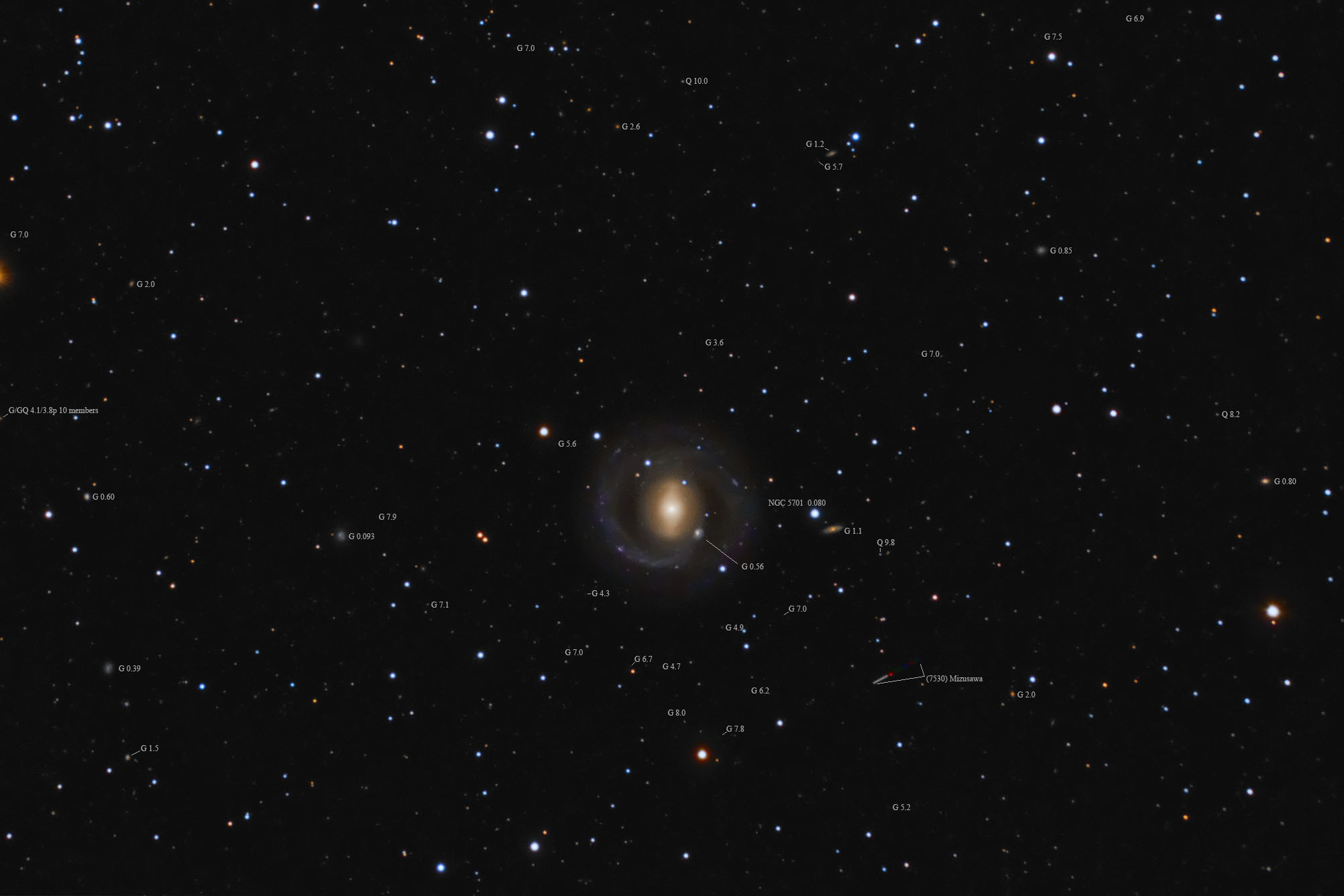 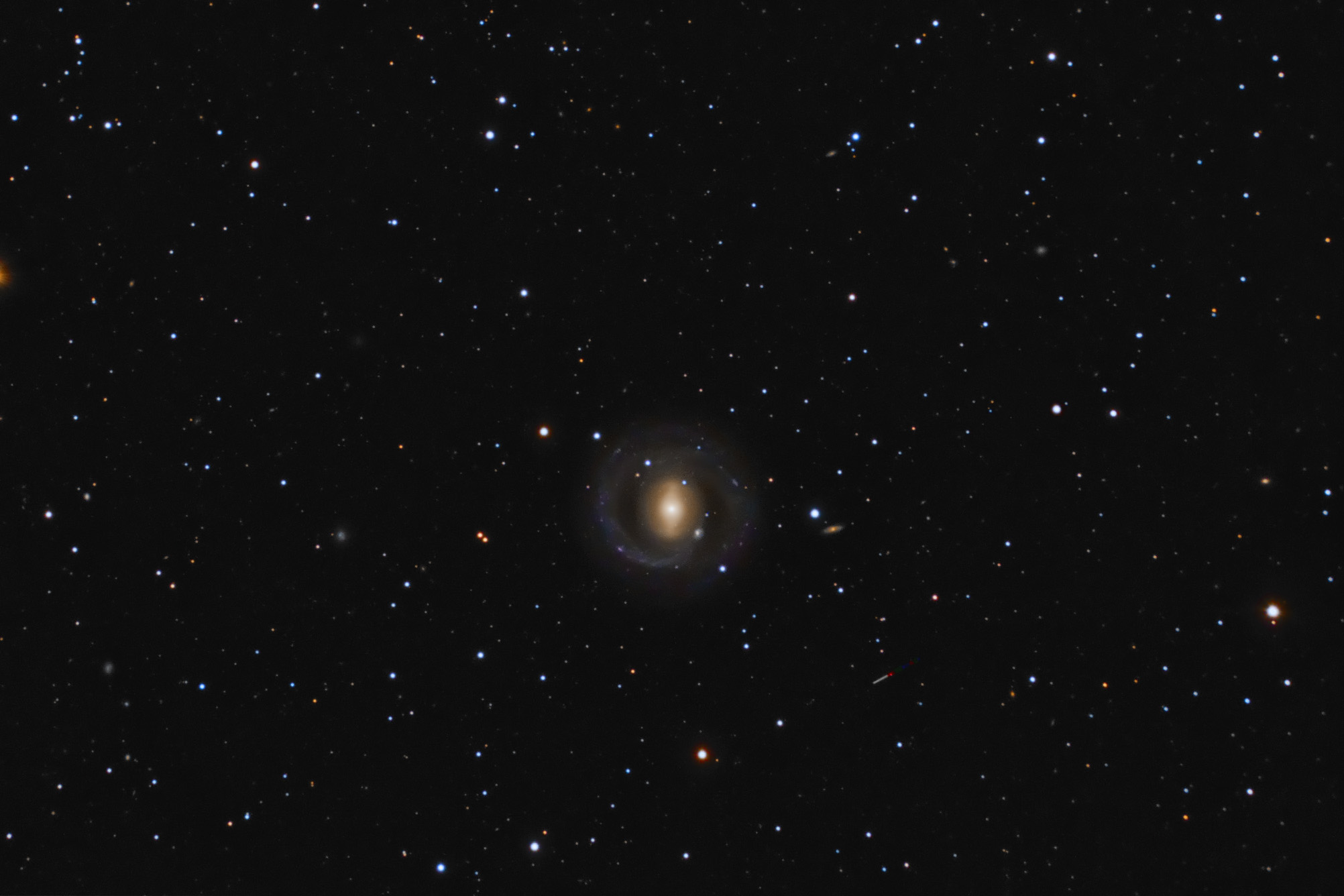