NGC 5713 is a highly disturbed SAB(rs)bc pec spiral. It would have fit Arp\'s one spiral arm category. Including plumes, it is some 70,000 light-years in diameter. It was discovered by William Herschel on April 11, 1787. It isn\'t in either of the Herschel observing programs.

NGC 5719 is a rather edge on SAB(s)ab pec spiral containing a narrow line AGN at its core indicating its black hole is actively feeding. The slanted heavy dust lane is said by some to indicate the disk is warped. The fainter dust lanes, however, appear rather normal without any slant. One paper that has studied this galaxy finds that about 20% of its stars are orbiting in retrograde compared to the other 80%. The paper says this is likely due to acquiring mostly molecular hydrogen likely torn from both galaxies by their interaction which then has turned into stars. I assume the slanted dust lane has a similar origin? http://adsabs.harvard.edu/abs/2007A%26A...463..883V This galaxy was also discovered by William Herschel on April 11, 1787 the same time he found 5713. It is some 90,000 light-years across including its faint outer regions. It too isn\'t in either of the Herschel observing programs.

There\'s a third galaxy that apparently is related to these two on the right edge of my frame which I\'ve labeled as LEDA 135857 (PGC 135857 in some catalogs). Oddly NED also shows it as GAMA 064758. But instead of it being about the same redshift as the NGC galaxies that entry says it is some 3.59 billion light-years distant and calls it a Narrow Emission Line Galaxy which isn\'t noted for the LEDA entry. If correct it would be some 700,000 light-years across. I think it safe to discard this identification as being a discovery by that all too often cited oriental astronomer Sum Ting Wong. Still, I noted it on the annotated image as well as the likely correct LEDA entry. The same paper mentioned above says it at the end of a large molecular hydrogen cloud created by the interaction of these two galaxies and its stars likely formed from it. If so it is a brand new galaxy some 25,000 to 30,000 light-years across.

Assuming the two NGC galaxies are at the same distance their projected separation is only about 266,000 light-years. Certainly, close enough they are still feeling each other\'s gravity well. Are they destined to eventually merge? I didn\'t find anything either way on this.

The annotated image contains 12 quasars plus one quasar candidate (UvES). Arp seemed to think quasars were associated with active or peculiar galaxies. I wonder if he knew of this field? NED listed over 200 objects in the field with redshift information. Many were ELG (Emission Line Galaxies) that were very faint. I point out the brighter ones and a couple of the very faint ones but after that ignored them as it would have filled the image with their catalog entries. It didn\'t help that this was taken on the same night as my last post so a lot of clouds passing by greatly reduced the depth of this image. My limiting magnitude is over one magnitude less than normal and nearly 2 less than on a really great night. Seeing, however, was reasonable so I didn\'t put it on the re-do list. 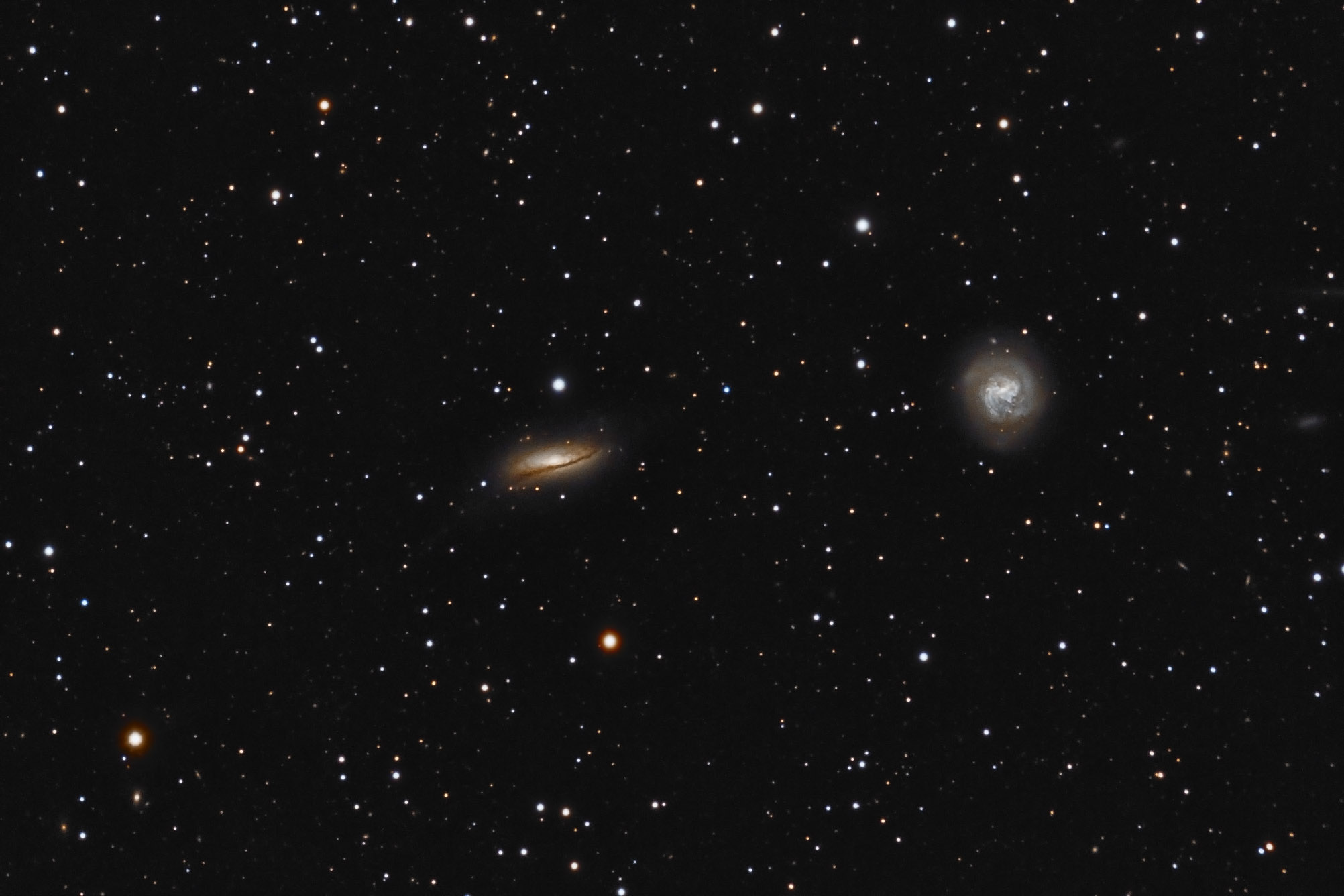 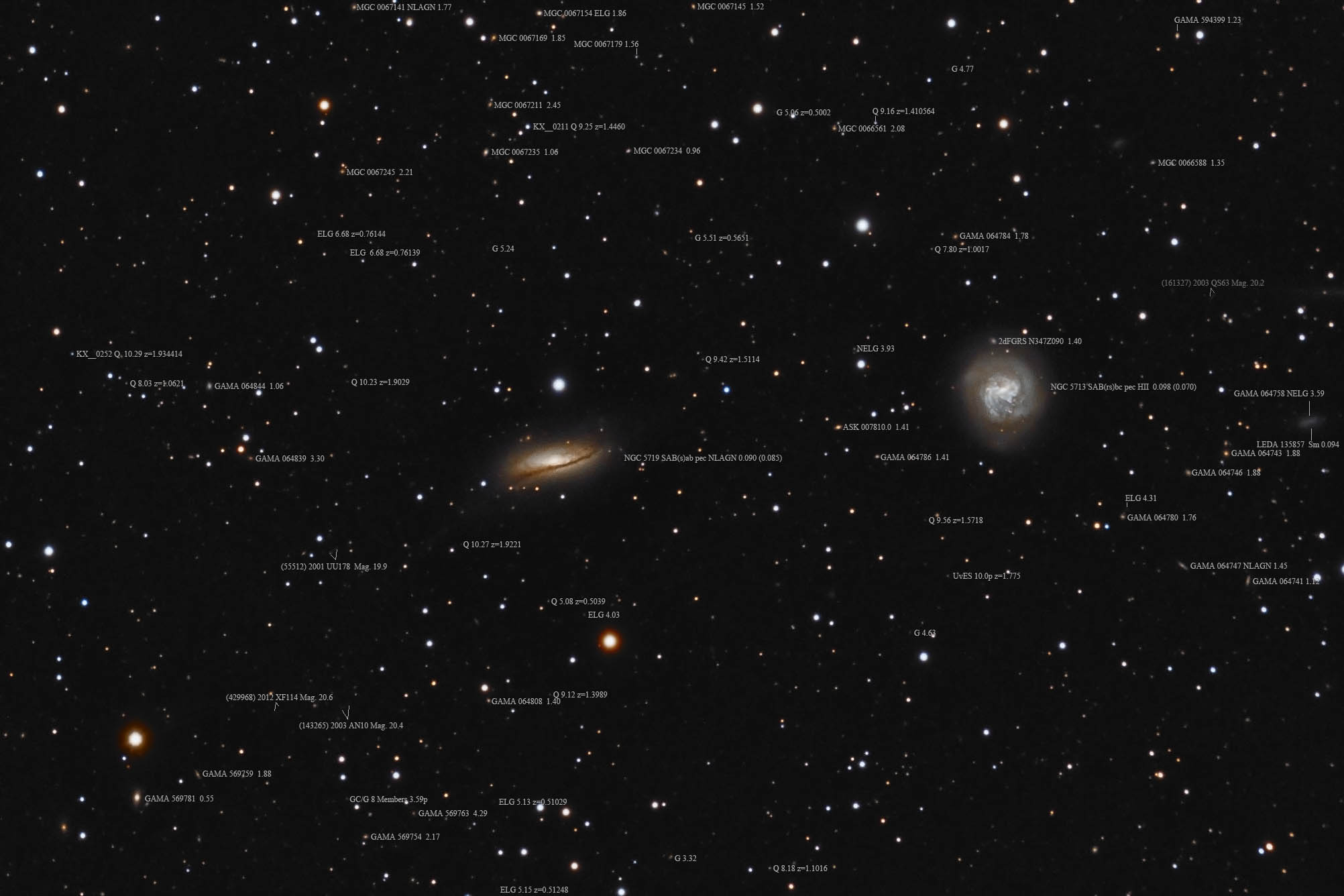