NGC 5750 is a ringed spiral galaxy with plumes in northwestern Virgo. Its distance depends on who you believe. NED\'s redshift data says about 88 million light-years. Others say up to 110,000 using non-redshift measurements. I\'m going to round it to 100 million for measuring its size. Not counting the plumes I get a size of about 90,000 light-years which grows to 130,000 including the plumes, especially the one to the northeast. The galaxy is a barred spiral with arms coming off the bar that overlaps forming the ring-like structure. It also has some dust lanes that just aren\'t where you\'d expect them to be. NED classifies it as a Narrow Line AGN while some others say Seyfert 2. In any case, it appears to have a rather actively feeding black hole at its core. The plumes and odd dust would argue this is due to a recent interaction or merger with another galaxy. Was LEDA 1150429 on the far right of my image the culprit? Its redshift is similar indicating it is likely part of the same group as NGC 5750. I found no classification for it. It does appear it could be rather disturbed and is quite blue indicating lots of current star formation is going on.

The annotated image has many Emission Line Galaxies (ELG) and some Narrow Emission Line Galaxies (NELG). The emission lines are narrow not the galaxy. Transparency was better than what passes for normal of late so I was able to pick up galaxies down past 22nd magnitude. This means some rather obscure catalogs had to be used to identify these without resorting to just coordinate names that the SDSS and other surveys use. Others had only coordinate names and are just labeled with a G for galaxy or Q for quasar. Some quasars have a redshift of over 2.5 meaning their light has been stretched 3.5+ times so that even much of their ultraviolet light is now infrared from our vantage point leaving very little in the visible spectrum. Only those with deep UV emissions can be bright enough when stretched into visible light for me to pick up.

This was taken as dawn approached. I tried two additional, beyond my normal 4, luminance frames in a brightening sky. While they were rather noisy they did help a bit to bring out the faint plume of NGC 5750 so I left them in. They were taken after the last of the color data. This resulted in the luminance trail of the two asteroids in the image to be split into two parts with the red and green images taken before the dawn luminance frames. 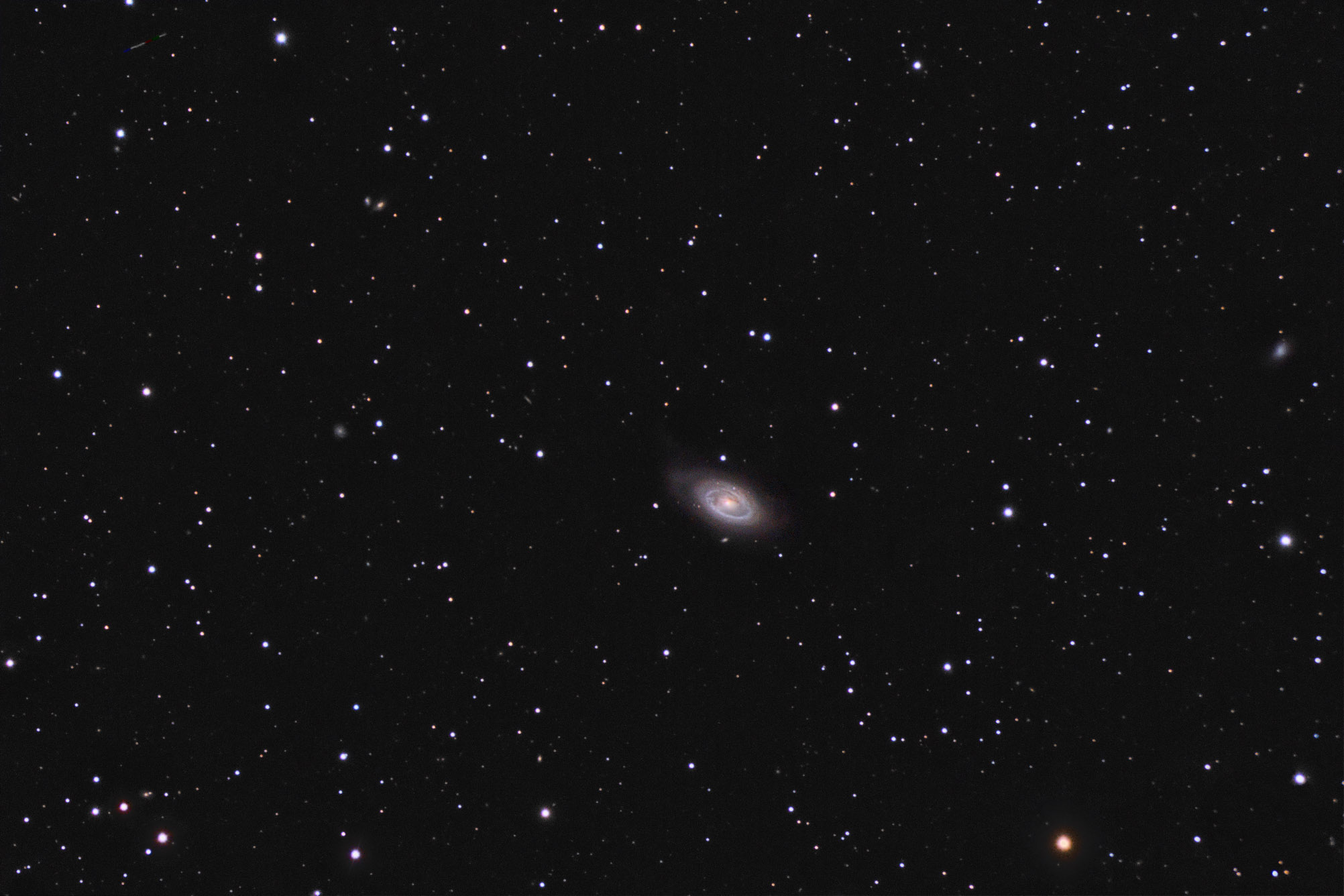 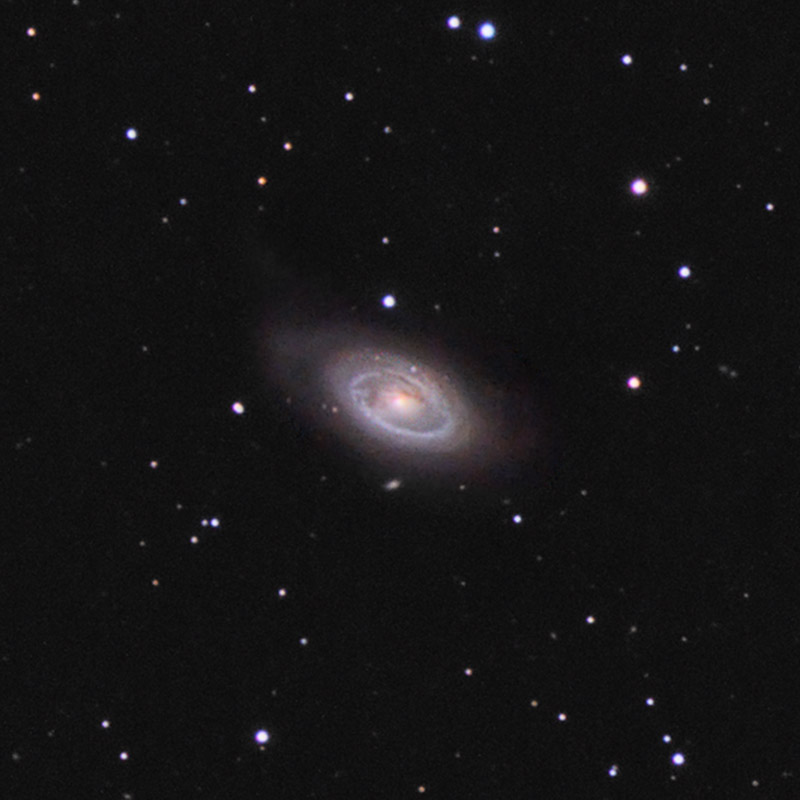 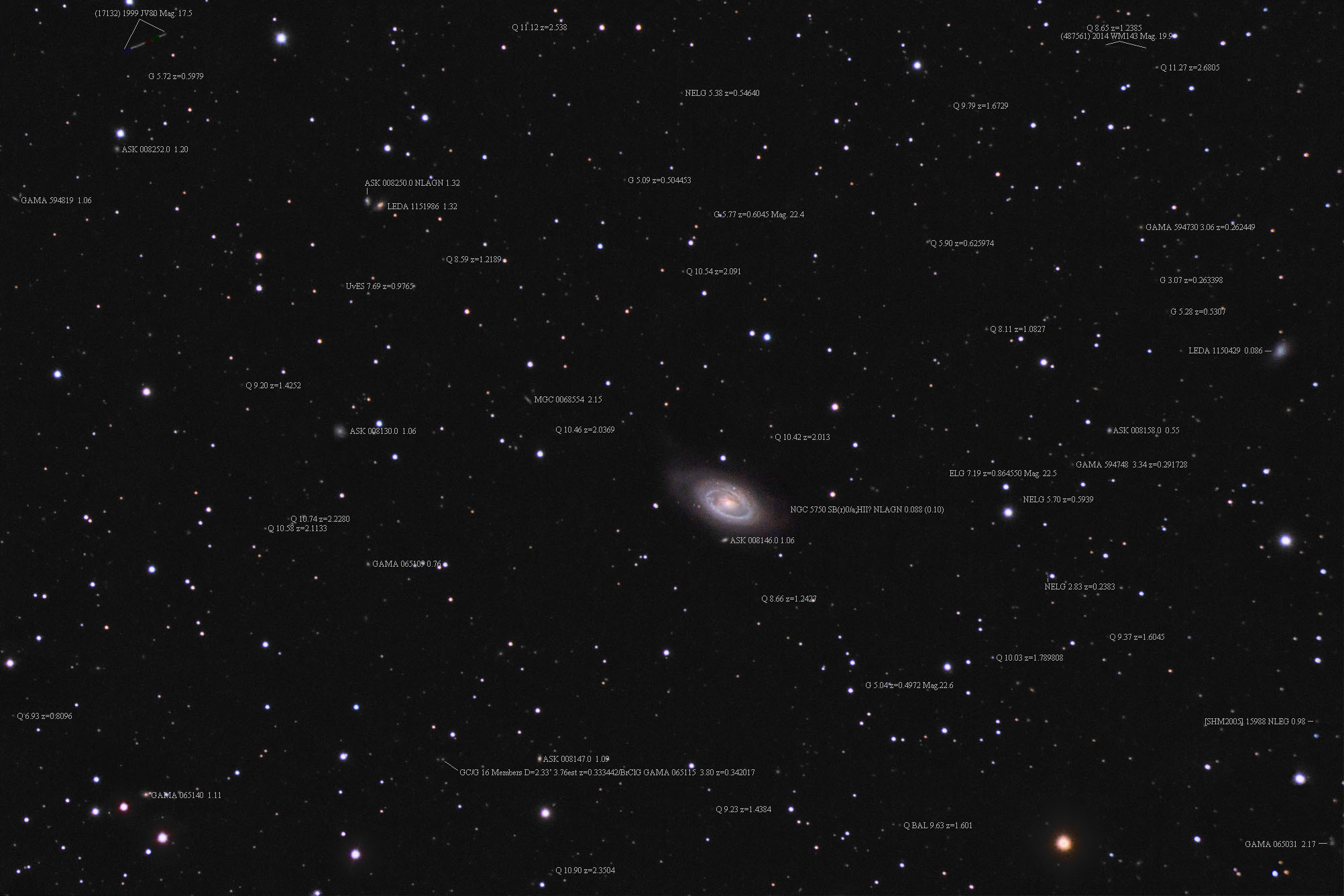