NGC 5774 and NGC 5775 are a pair of interacting galaxies in Virgo. Papers from 50 years ago considered them non-interacting, an opinion that has changed over the years. NGC 5774 is the blue spiral. It is classed as SAB(rs)d by NED and SBcd by the NGC Project. Redshift puts it 81 million light-years away while Tully-Fisher measurements say 87 million light-years. NGC 5775 is the near edge-on disk galaxy. It is classed as SBc? one place at NED and Sb(f) another. The (f) classification just means it is seen edge-on (not that it is flat as some web pages claim. The NGC Project classes it as SBc without the question mark. Redshift measurements put it about 87 million light-years away. Tully-Fisher measurement agrees. In any case, it and NGC 5774 must be at the same distance to show the interaction seen. I used redshift data for consistency in the annotated image but also show the Tully-Fisher estimate as well. I\'ve not done that before on an annotated image. (Edit: I now do that on all annotated images when available at NED.)

A Hubble Space Telescope image of NGC 5775 has been recently released, see link below. Only a week before, by coincidence, I\'d imaged this pair. I\'m more than a year behind in processing my images but moved this one to the top of the processing list. I don\'t see in their image all they talk about. The HST image is rotated 90 degrees counterclockwise from my image. Notice along its bottom edge near the right corner some faint stars are resolved. From my image, these appear to be stars in NGC 5774\'s drawn out arm that extends over or behind NGC 5775. Unfortunately, the HST image doesn\'t extend far enough to see the arm on the other side of the edge on galaxy. The Hubble image was taken through narrow band filters that distort the color of the galaxy showing extensive HII regions of star formation an odd orange color instead of the more common red-pink color. Hubble has also imaged part of NGC 5774 but only in one band of near IR light. It can be found at the Hubble Legacy site for those of you that are interested. Being only one 640 second frame it is pretty noisy.

The annotated image has many UvES (Ultraviolet Excess Sources) in it. These are likely quasars. Distances to them are determined photographically from the 7 photometric channels of the SDSS survey. This method is approximate but not as exact as spectroscopic measurements. Some are very faint and may be difficult to see. You may need to enlarge the image to find the fainter ones. 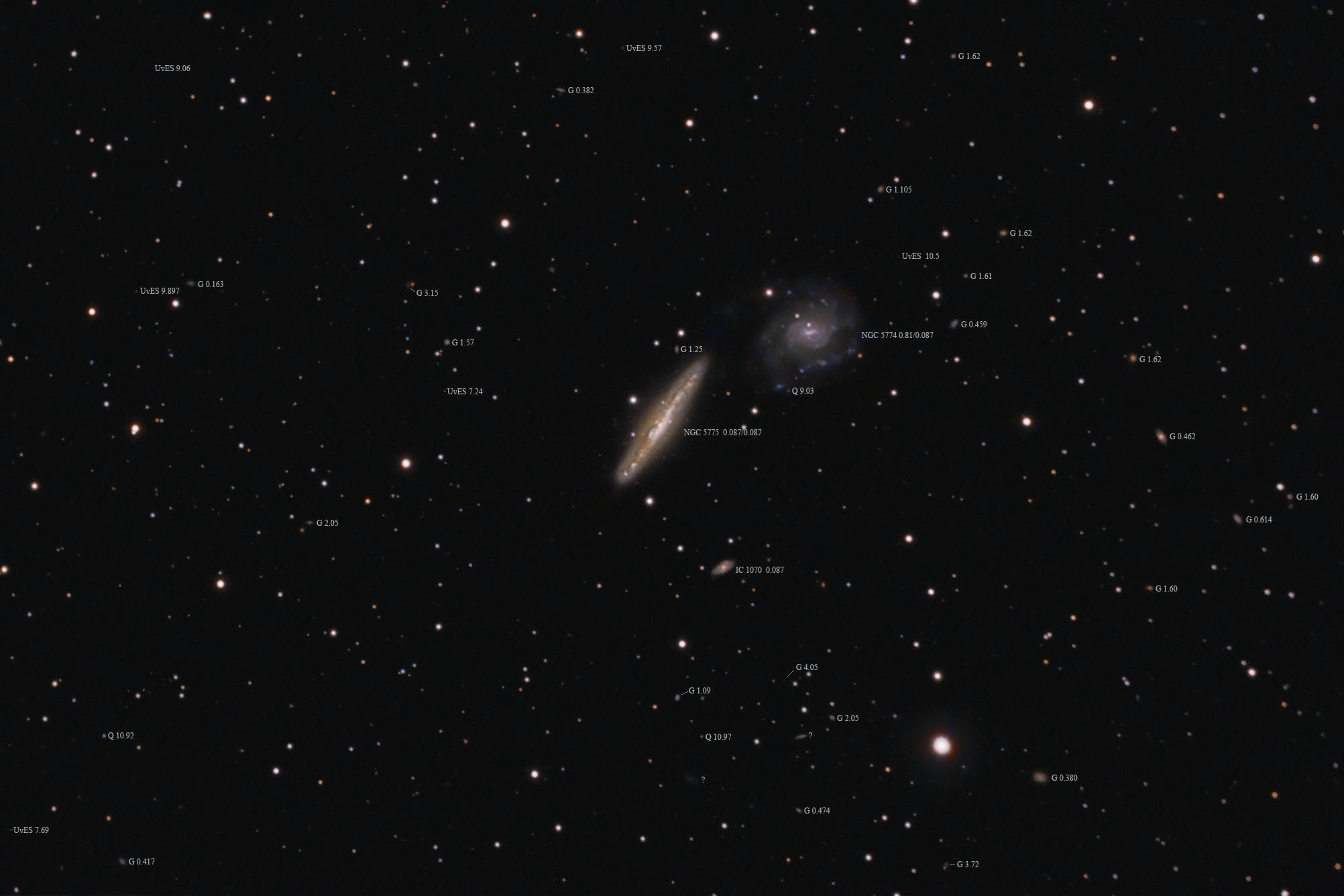 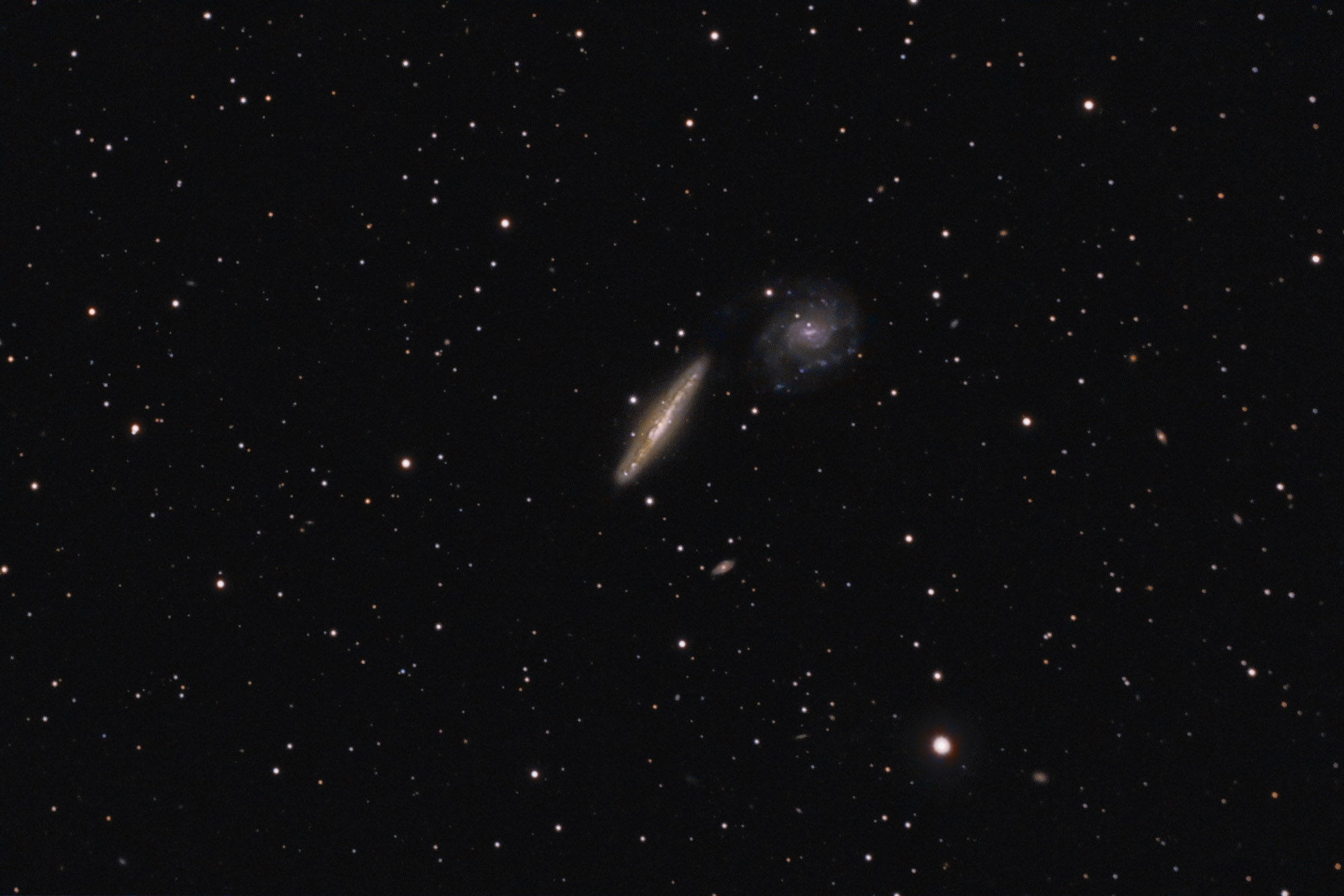 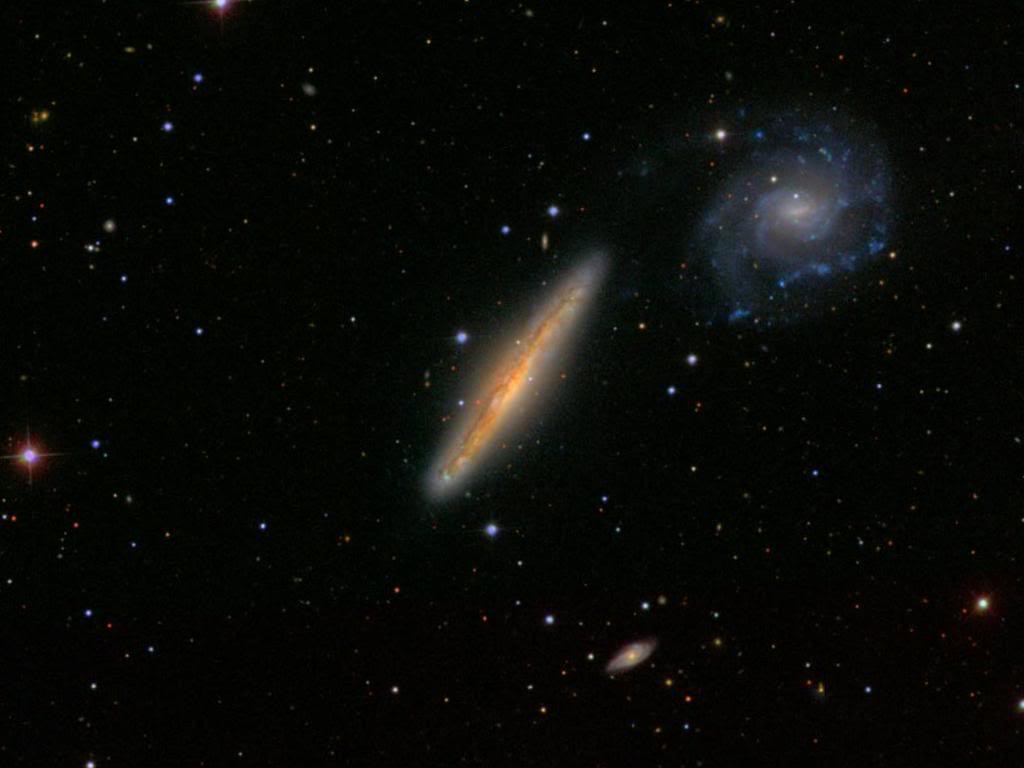