The three galaxies in the center are the WBL Galaxy Group. NGC 5851, 5852 and PGC 53961 at about 310 million light-years in southeastern Bootes. Several other galaxies in the field have a similar redshift so are likely members of the same local galaxy group just that they are too far from the three to have made the group. Groups tend to be mostly elliptical or S0 galaxies. In this case, two are obvious spirals and while NED lists the third as a spiral as does Seligman and the NGC project it looks more like S0 to my eye. Apparently, its red and dead appearance sways me. The three galaxies span a distance of only 285,000 light-years if all are at the same distance making it a rather compact group. A fourth member is just to the west but for some reason didn\'t make the WBL 543 club. I guess being a dwarf just doesn\'t cut it.

The two NGC galaxies were discovered by William Herschel on May 26, 1791, but neither made a Herschel 400 observing program.

The field contains over 3000 galaxies listed in NED. That\'s likely far more than the number of stars in the image. I only annotated those with redshift information at NED. In doing so I opened two cans of worms, however. Both involve galaxy clusters in the image. To the south of NGC 5851 is the cluster GMBCG J226.75567+12.75014 at 2.96 billion light-years. NED shows the galaxy I point to as WHL J150706.5+124511 BCG. That carries the name of a different galaxy cluster. NED also shows the galaxy with the GMBCG J226.75567+12.75014 name. It\'s not uncommon for both these catalogs to list the same cluster so at this point I wasn\'t too bothered but why wasn\'t the cluster also named under the WHL name? Then I came to a different cluster to the east of this one that did carry the WHL J150706.5+124511 name at 4.09 billion light-years but that didn\'t have any bright cluster galaxy listed for it. Of course not as that was given to the other cluster. Mistakes like this are rare but happen so I continued. Then I came to the bright cluster galaxy GMBCG J226.66794+12.74274 BCG. But there was no cluster by that name at that location. Its distance was listed at 3.98 billion light-years. Then below and to the left where nothing is seen, I find a galaxy cluster with that same name said to have 8 members and only 320 million light-years distant. Thus WBL 543 would be a member of this cluster if that was right! The galaxy and cluster names were too long for the annotated image but you should have to trouble finding them or in the case of the last cluster not finding it though the label is at its location. I\'ve never encountered an error at NED of this level before. Two in one small part of an image is also unheard of. Someone was having a bad day or is this done automatically by software that has a bug in it? I know a lot of their info comes directly by computer from the Sloan database so it could be something in that has a bug in it. I didn\'t notice anything else wrong in the field but who knows. If individual objects were scrambled with no second reference as with cluster and the anchoring bright cluster galaxy I\'d not be able to detect there was an error.

While transparency for this image was very good clouds did move in and ruin one of the red frames so I only have one red frame for this one. Fortunately, the only satellite in that frame didn\'t cross anything important as could be cloned out without harm. 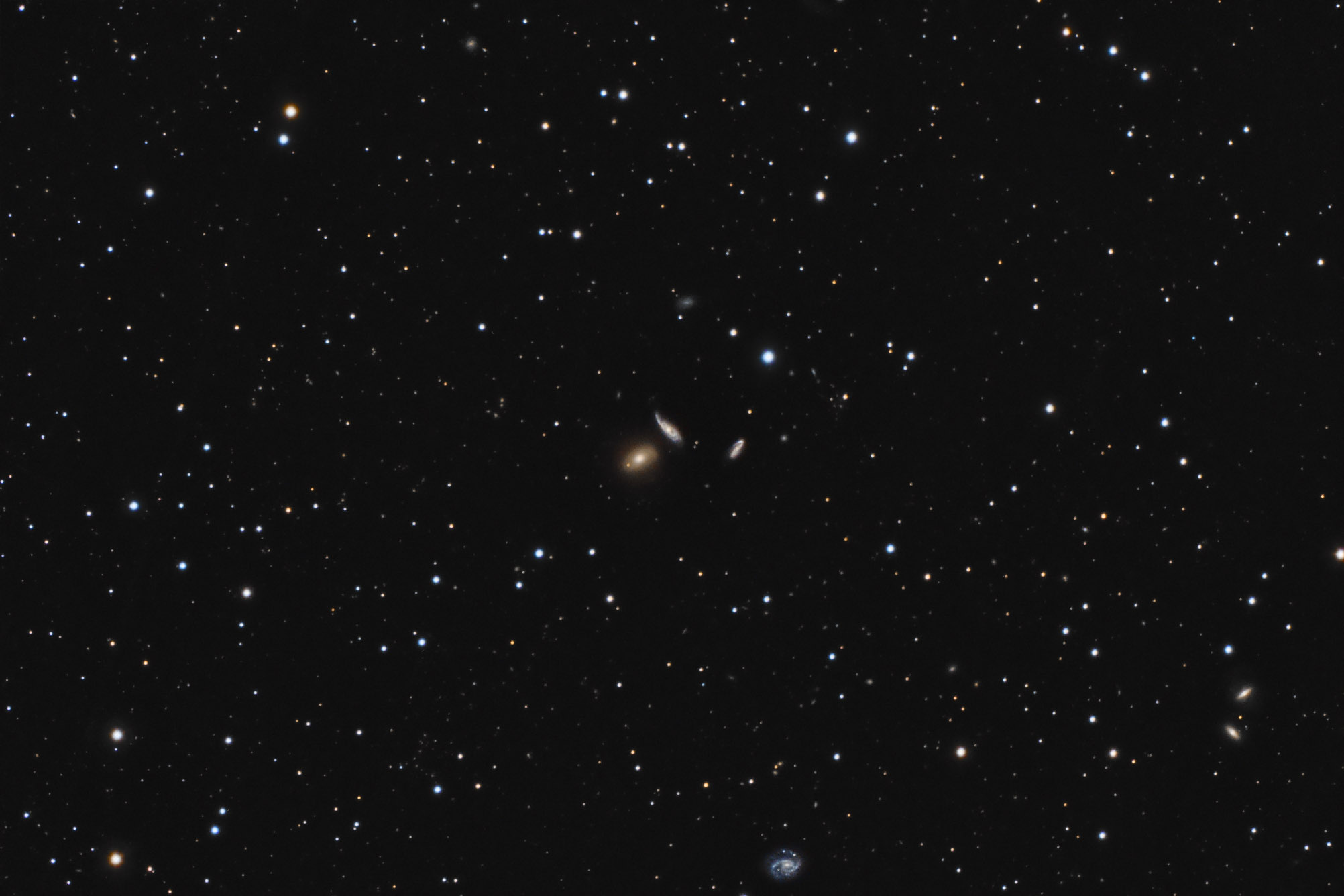 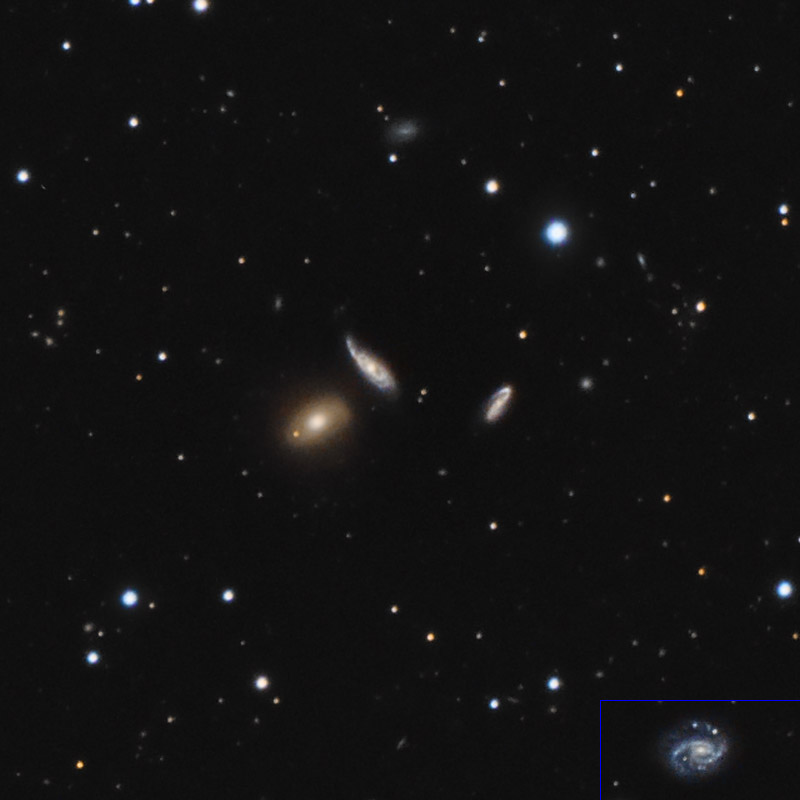 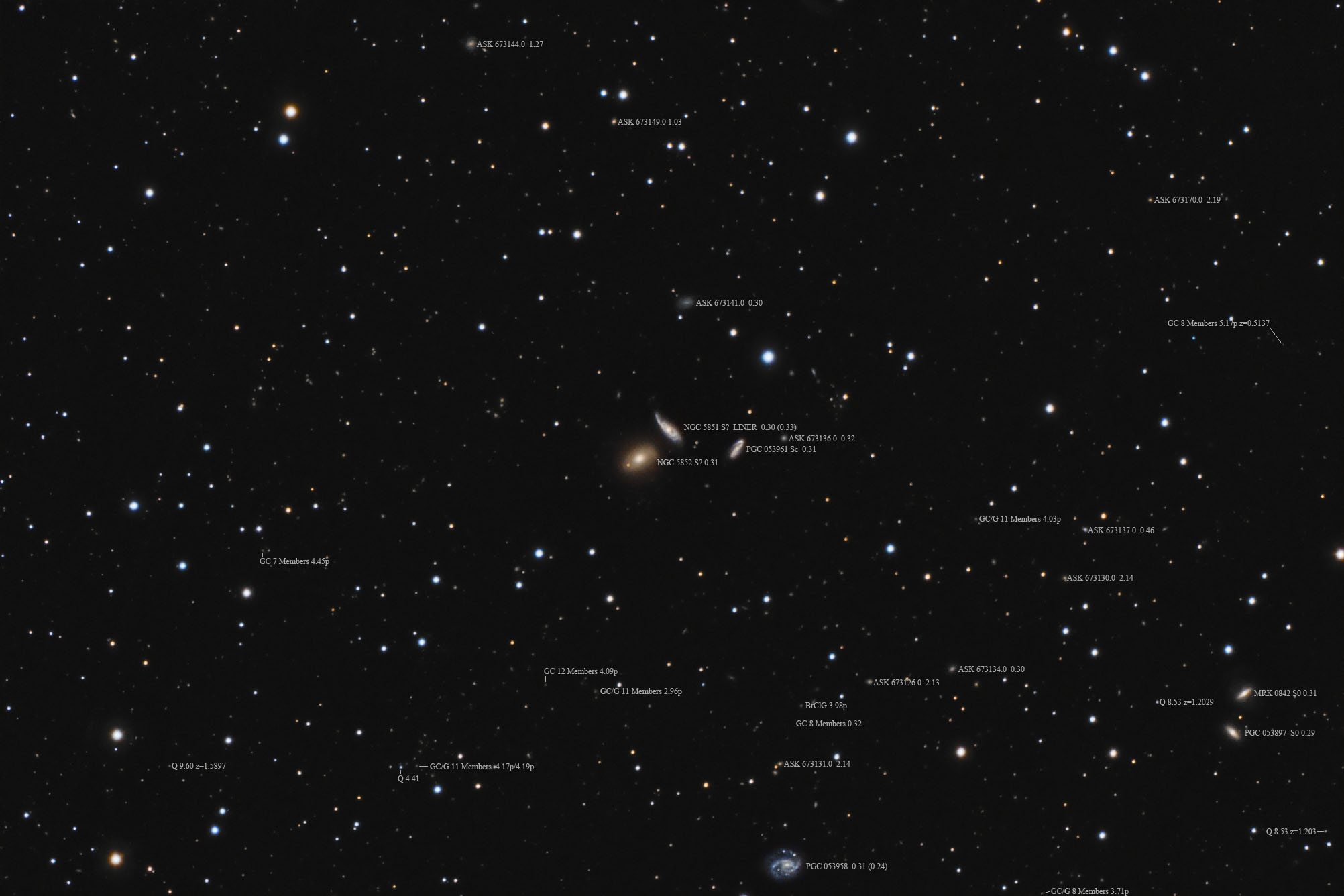