NGC 5894 is a barred? spiral in Draco below the bowl of the Little Dipper about 120 million light-years distant. That makes it about 120,000 light-years across, a rather large spiral. I put a question mark after barred because some papers listed it that way and I can\'t see the bar. Though it is so edge-on I assume they are using radio observations of hydrogen flow to make this designation. Still, if some pros are questioning it, I put it in. NED officially classifies it as SBdm? I don\'t know if their question mark is for the barred status or something else. The NGC Project classifies it as SB?c-Irr showing they do question the barred status. They call it a somewhat irregular spiral while the NGC project says it is a Magellanic irregular, a more specific type. Seligman says simply SBm not questioning anything but not getting into if it is a c or d type spiral. When dealing with galaxies this edge on this difference of opinion isn\'t unusual. So much for astronomy as an exact science.

I put it on my list for the odd fine blue line of star-forming regions. It may be broad when seen from above or below but edge-on it is very thin and stands out. Arp put a few like this in his filament classification. It also made my list for being listed as a flat galaxy in the 2Mass Flat Galaxy Catalog as 2MFGC 12297. The Galaxy was discovered by William Herschel on May 25, 1788. Oddly, I first looked at this data on May 25, 2016, 228 years later. OK, maybe not so odd considering I\'ve imaged more than 365 of Herschel\'s galaxy discoveries so it is rather expected one would get first looked at in my data on its anniversary. Also looked at and processed are two different things allowing two anniversary dates for many of these. It isn\'t in either of the Herschel 400 observing programs.

It is a rather lonely galaxy with nothing but very distant companions. NED lists quite a few UvES objects in the field. These are quasar candidates but without accurate spectroscopic redshift. Some could be stars in our galaxy with spectral characteristics misleading the photometric redshift measurement. Though those it lists as UvES rarely are disproved. The field has quite a few UvS objects as well. They too are quasar candidates but most turn up false alarms. Thus I excluded those only shown as UvS objects from being annotated. Quite a few galaxy groups are listed as well. I\'d not call groups of a dozen or less a cluster but that\'s how these are listed. All have only photographic redshift measurements. Not being possible single stars the error that plagues UvES candidate quasars doesn\'t apply. In one case the Bright Cluster Galaxy had its own spectroscopic redshift which I listed as well as the photographic one. A \"p\" denotes photographic redshifts.

One galaxy interested me but I found nothing much on it. That is ASK 111220.0 at 950 million light-years to the northwest of NGC 5894 (upper right). It has a plume off the eastern end. There may be one on the western end but then a brilliant blue object dominates. NED lists the blue object as a UvS object but without any redshift determination. It may be a separate object that may or may not be interacting with the galaxy, blue star-forming region in the galaxy or something far from the galaxy. I found nothing to help here. If unrelated I\'d expect a more symmetrical look to the galaxy with an opposing plume or arm but that\'s not the case. 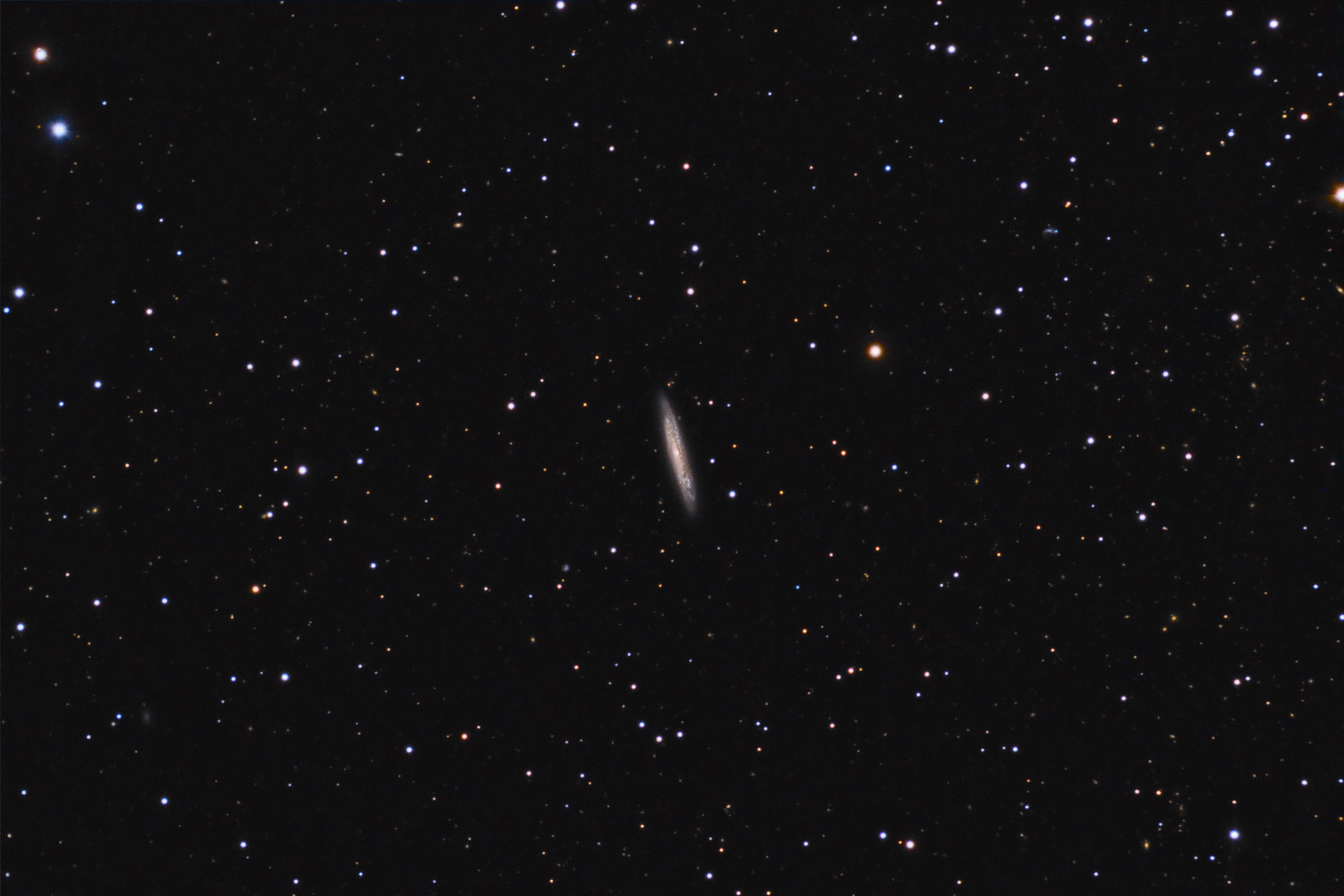 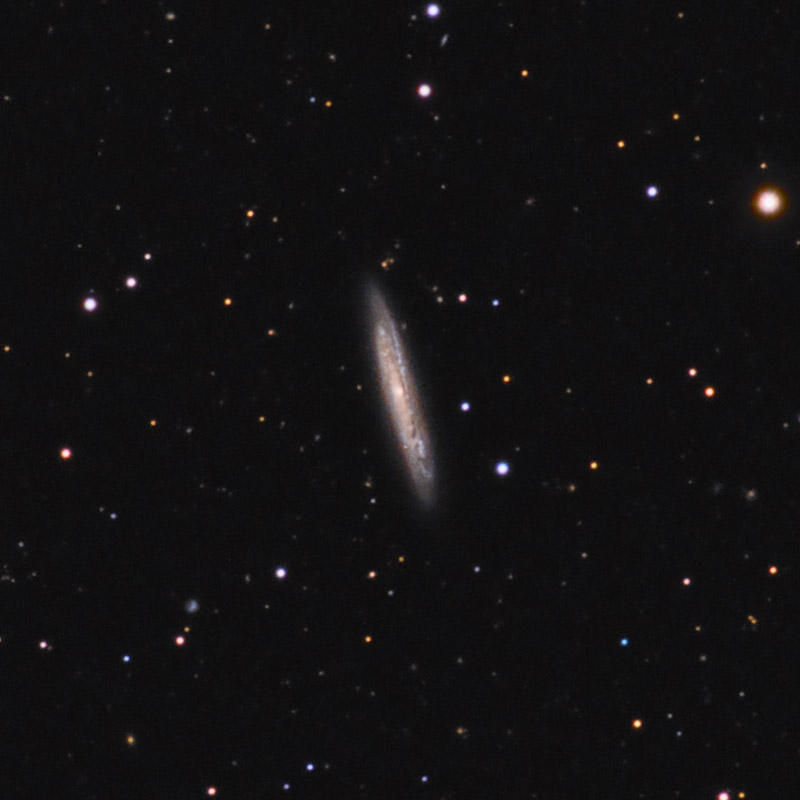 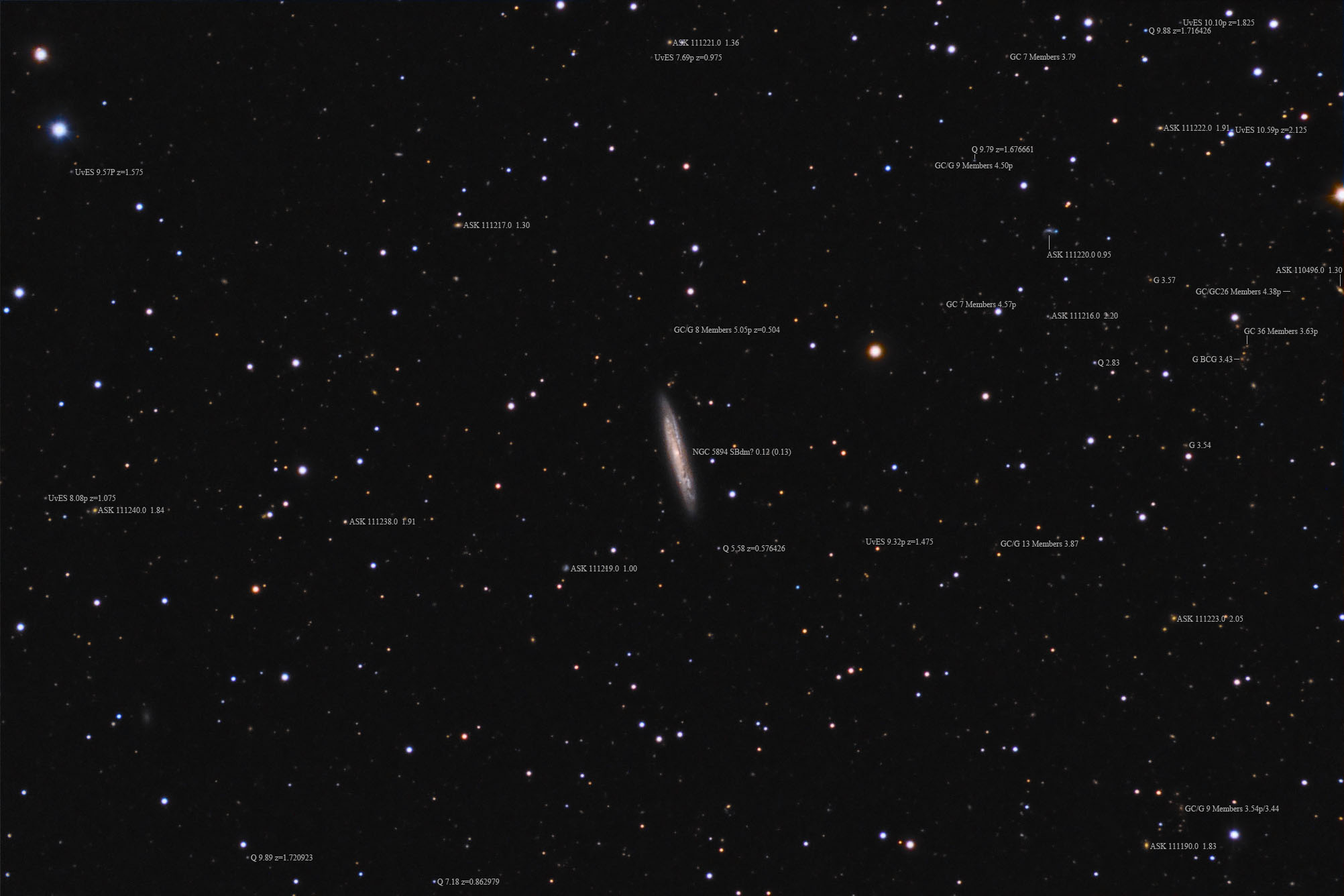