NGC 5899 and NGC 5900 are a pair of \"non-interacting\" galaxies north of the \"kite\" of Bootes. Redshift puts them about 120 million light-years distant. I put \"non-interacting\" in quotes as I\'m not convinced that is the case. Both have large faint halos. That of NGC 5900 seems to point down toward NGC 5899. The spiral structure of NGC 5899 seems quite unusual with one heavy arm defined by many bright star clouds of newly formed stars. The arm on the other side is hard to define. Most of the disk is full of irregular star streams that have only a vague spiral pattern to them. NGC 5900 has an intense red dust lane often seen in interacting spirals seen edge-on. Three other NGC galaxies are in the image NGC 5893, 5895 and 5896. A 6th NGC object turns out to be just a field star, NGC 5901.

NGC 5896 is classed by the NGC project as a compact galaxy. Though it appears to be a spiral galaxy with rather tightly wound spiral arms, especially the northern one. NED didn\'t try to classify it. NGC 5895 was also not classified by NED, though the NGC project says Sc. The barred spiral NGC 5893 has mostly featureless spiral arms, though the southern one has a detached part that is full of bright star clouds. On the northeastern side is an object NED classifies as a separate galaxy with a redshift nearly identical to NGC 5893. Is it really a separate galaxy or another star cloud? I\'ve marked it as a galaxy in the annotated image though I am not certain this is the case. Though it could be the remains of a cannibalized galaxy\'s core. That would account for NGC 5893\'s odd spiral structure that makes it look somewhat like the CBS eye as well as the large plumes beyond the main arm structure.

The 6th magnitude M2 giant star sent nasty glare across much of the field. While not as nasty as I get from blue stars it was no fun to deal with. Removing the glare greatly attenuated the apparent brightness of the star as well. 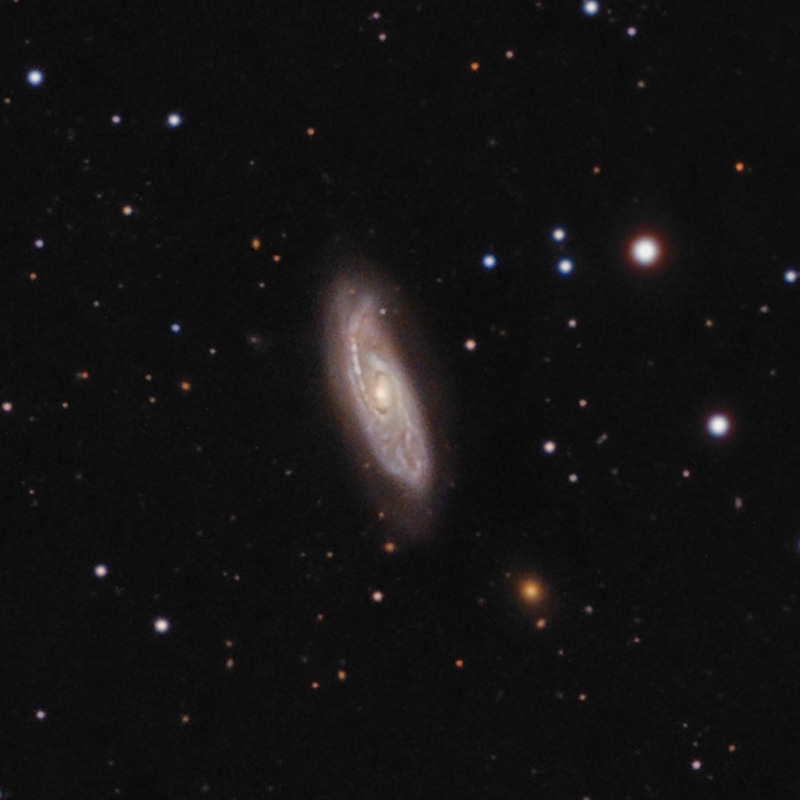 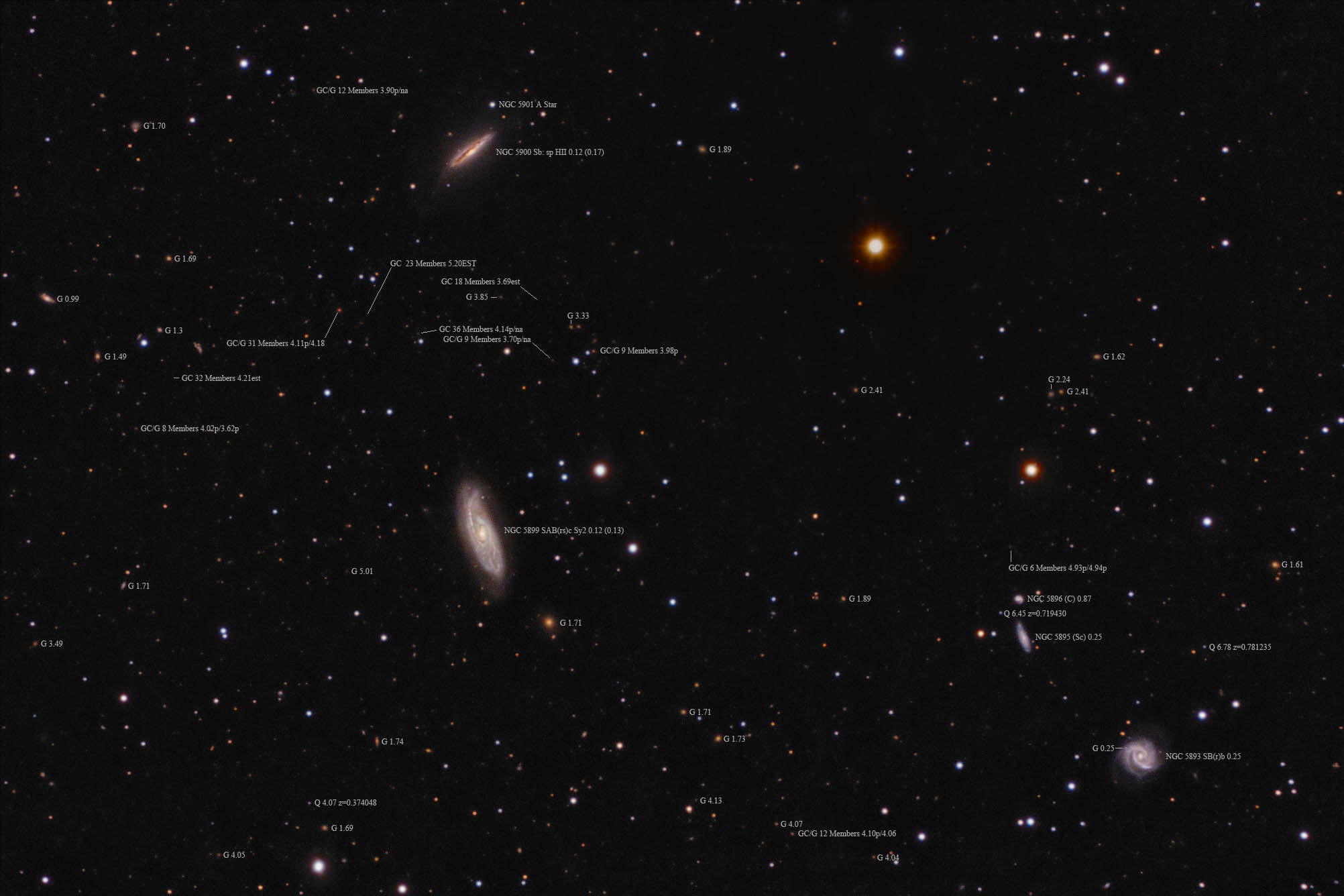 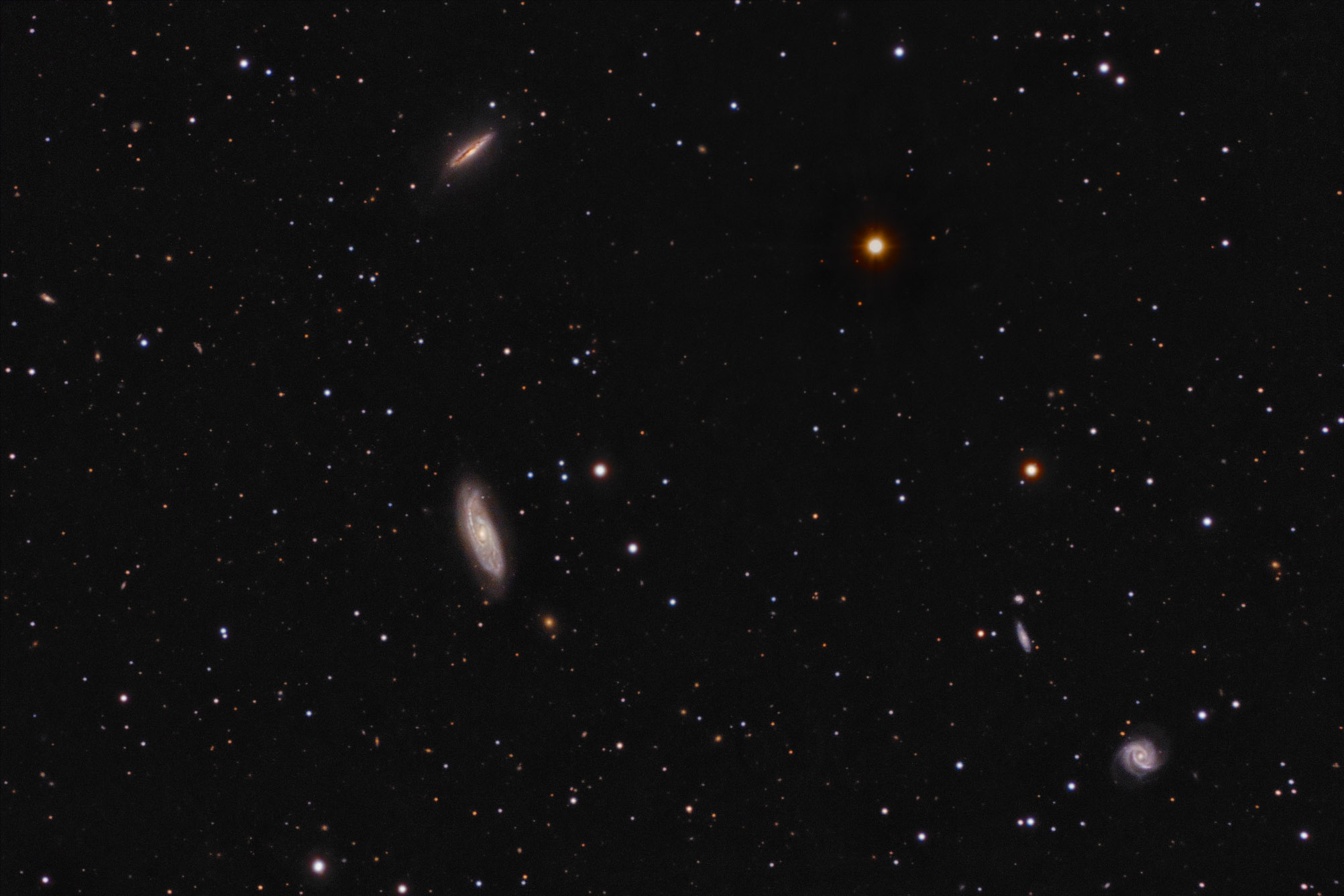