NGC 5905 and 5908 are a pair of spiral galaxies in Draco less than a degree north of Bootes. They are a bit under 160 million light-years away. Most sources say they are not interacting. Though NGC 5905 certainly looks like it was torn up by some interaction in the recent past. NED and the NGC Project classify NGC 5905 as SB(r)b;HII Sy1 and SBb respectively. For NGC 5908 they both say Sb though one paper says it could possibly be Sc based on its very small core. Assuming a distance of about 155 million light-years these are large spiral, NGC 5908 is about the size of our galaxy at 122,000 light-years. Measuring the full extent of NGC 5905\'s distorted arms I get a size of 240,000 light-years making it an extremely large spiral though this is more due to its distortion than its being very massive as spirals go. Prior to being drawn out it likely was no larger than NGC 5908.

Most papers say NGC 5908 is very similar to the Sombrero Galaxy, M104. I suppose this is due to the very small core and a huge halo surrounding the galaxy along with a very well defined dark lane. Though the halo about M104 is far larger than the disk the disk of 5908 appears to be slightly larger than the halo.

While NED says 5905 is a Seyfert 1 galaxy a note at NED disagrees saying Seyfert 2 whose true nature is hidden by the HII emission. In any case, it certainly has an actively feeding black hole at its core. There were to Tully-Fisher distance measurements at NED for NGC 5905 that place it at about 140 million light-years. No non-redshift measurements were available for NGC 5908 that I found.

Both were discovered by William Herschel on May 5, 1788. They aren\'t in either H400 program run by the Astronomical League.

Look closely at the annotated image and you will find a couple dwarf galaxies with similar redshifts showing they are members of the same group. East of NGC 5908 is a pair of apparently interacting galaxies, KUG 1515+556 at 370 million light-years. The northern member is very blue and small but seems to have a large plume to the southwest. The lower galaxy is far larger and redder. It too seems surrounded by a plume of stars. At my resolution, they appear to overlap. Sure wish we could get a closer look at this pair. NED shows no papers about them.

There are several quasars in the image, two of which with redshifts greater than 2. There are several galaxy clusters as well one with its bright cluster galaxy visible at 5 billion light-years in my image. It must be a huge and brilliant galaxy.

As usual, UvES objects are likely quasars but haven\'t been confirmed spectroscopically with redshift being determined photometrically instead as noted by a \"p\" after the distance.

This is my last May 2012 object. June was a surprisingly good month but due to its lack of dark time, I need two nights to get an object. Once in a while, I got more than one but less than two. Still, it was twice as productive as February of 2012 or January and February this year. 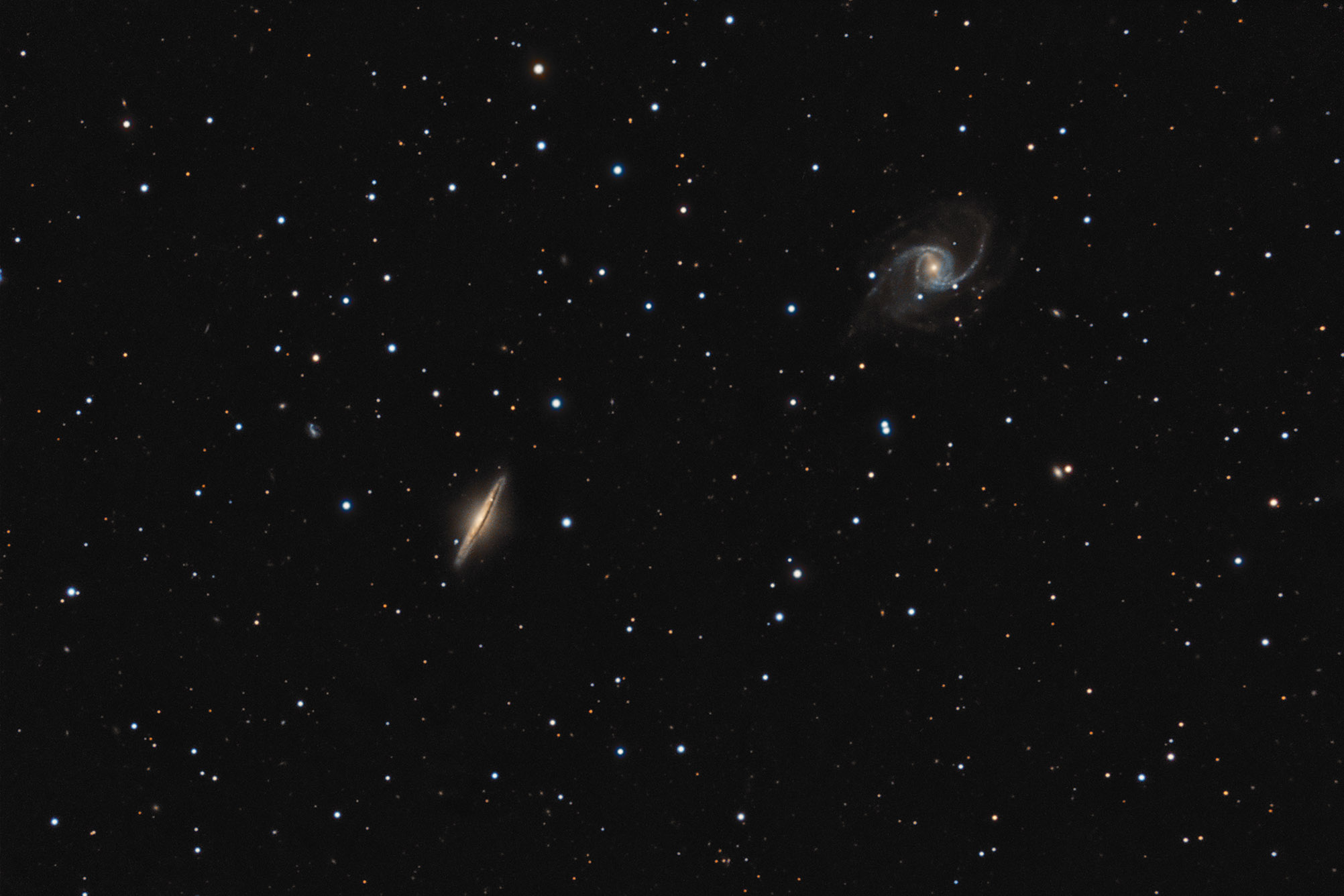 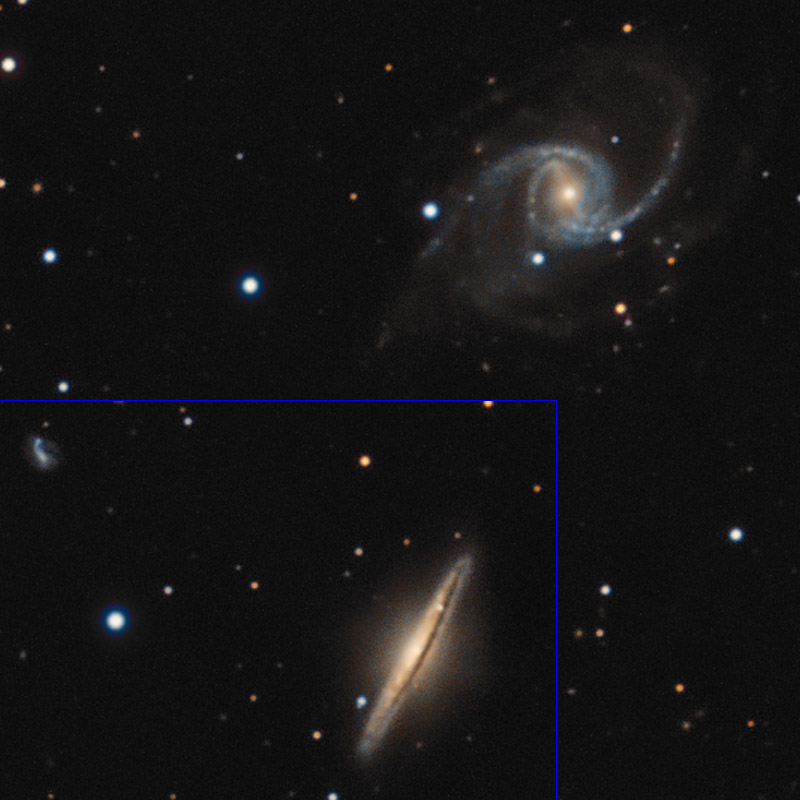 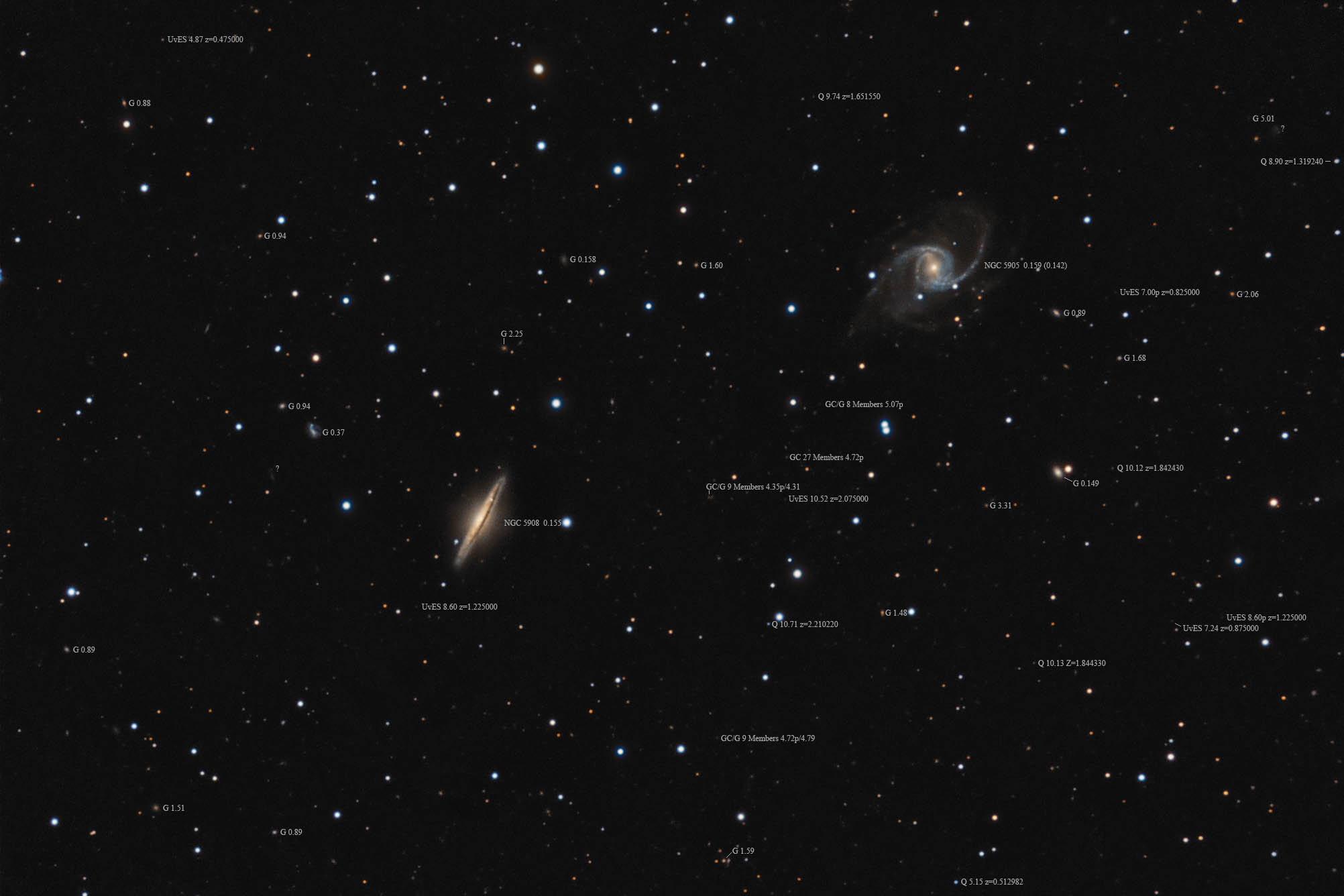