NGC 6175 is a pair of interacting galaxies in the Abell 2197E(ast) galaxy cluster in western Hercules about 410 million light-years from earth. The cluster is centered on the huge elliptical galaxy NGC 6173.

It is rather ambiguous that the pair of galaxies making up NGC 6175 are interacting from images of it but the strong radio emissions make it quite evident the pair is interacting. Also, faint plumes can be seen south of the southern member. The western side of the northern member has an odd brightening separated from the rest of the galaxy by a faint dust lane which carries its own designation. I can\'t tell if it is a plume or not. As the object\'s hard to see as a separate object I didn\'t annotate it. It is [BFW2006] J247.48177+40.63115 for those wanting to look it up. The coordinates are in its name. I was surprised that there\'s little on this interacting pair. It was discovered by William Herschel on March 18, 1787 but isn\'t in either of the Herschel 400 observing lists.

The cD galaxy for the Abell cluster is NGC 6173 a huge shell elliptical galaxy. I had no idea of its size or shells before taking this image. If I had I\'d have put a lot more time into it as they just barely show in my image. The obvious part of the galaxy measures some 94 arc seconds across translating to a size of 183,000 light-years. That\'s large but then the obvious shell beyond this measures 175 arc seconds across for a size of 340,000 light-years. But I see hints of a yet larger shell that extends past ASK 164838.0 to ASK 165386.0 to the northwest and about an equal distance to the southeast. That makes it some 320 arc seconds across and 620,000 light-years in diameter. I need to revisit this field with a much longer exposure time. It was discovered by William Herschel the same night as NGC 6175 and also is not on either of the Herschel 400 observing programs.

ASK 165386.0 has a plume so it may be interacting with NGC 6173. It lies at the same distance so could certainly have been distorted by it.

At the top of the frame is maybe NGC NGC 6174. Problem is which of three galaxies is it, if any. NED says it is the combination of two to the east sharing a common halo. The NGC project says it is the single galaxy to the west at the same declination. I\'ve labeled both with a question mark after the NGC 6174 label. The discussion at the NGC Project is too long to include here nor can I directly link to it. Go to http://www.ngcicproject.org/dss/dss_n6100.asp then click on the NGC 6174 Data button and scroll down to the Historical Release Notes/Correction for NGC 6174 section.

The other NGC galaxy in the field is NGC 6180. NED says it is S0 while the NGC project says E?. It was discovered on June 23, 1876 by Jean Marie Édouard Stephan of Marseille Observatory using their 80cm reflector.

Since all of the cluster members reside within about 10% of 410 million light-years I didn\'t include distances for cluster members, just their catalog name using the shortest name possible to reduce the clutter annotating so many objects creates. Non-cluster objects with redshift information do show their distance in billions of light-years. Seeing was really moving the stars around the night I took this creating rather wonky stars. Yet another reason for retaking it next year. Seeing was so bad the three blue frames taken the first night were completely unusable as the stars were all over the place. I tried again the following night but only one of the two was usable leaving the image a bit blue starved. Yet a third reason to redo this one.

This is my first August image. While July was poor allowing me only 12 objects captured, August was even worse with only 8 captured even though nights were longer. If the weather this year is becoming the norm thanks to global warming, I\'m going to have a lot more time for my other hobbies! 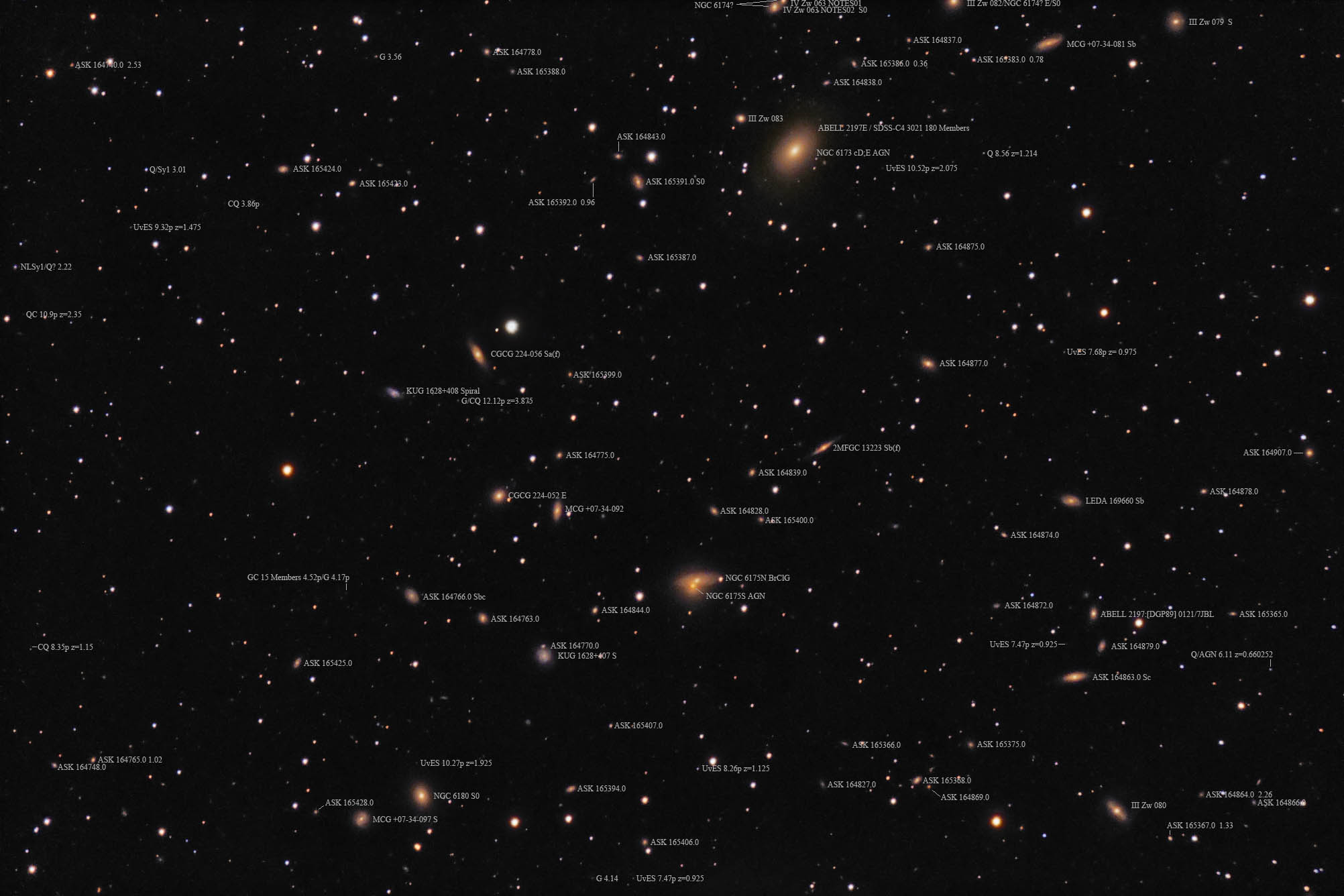 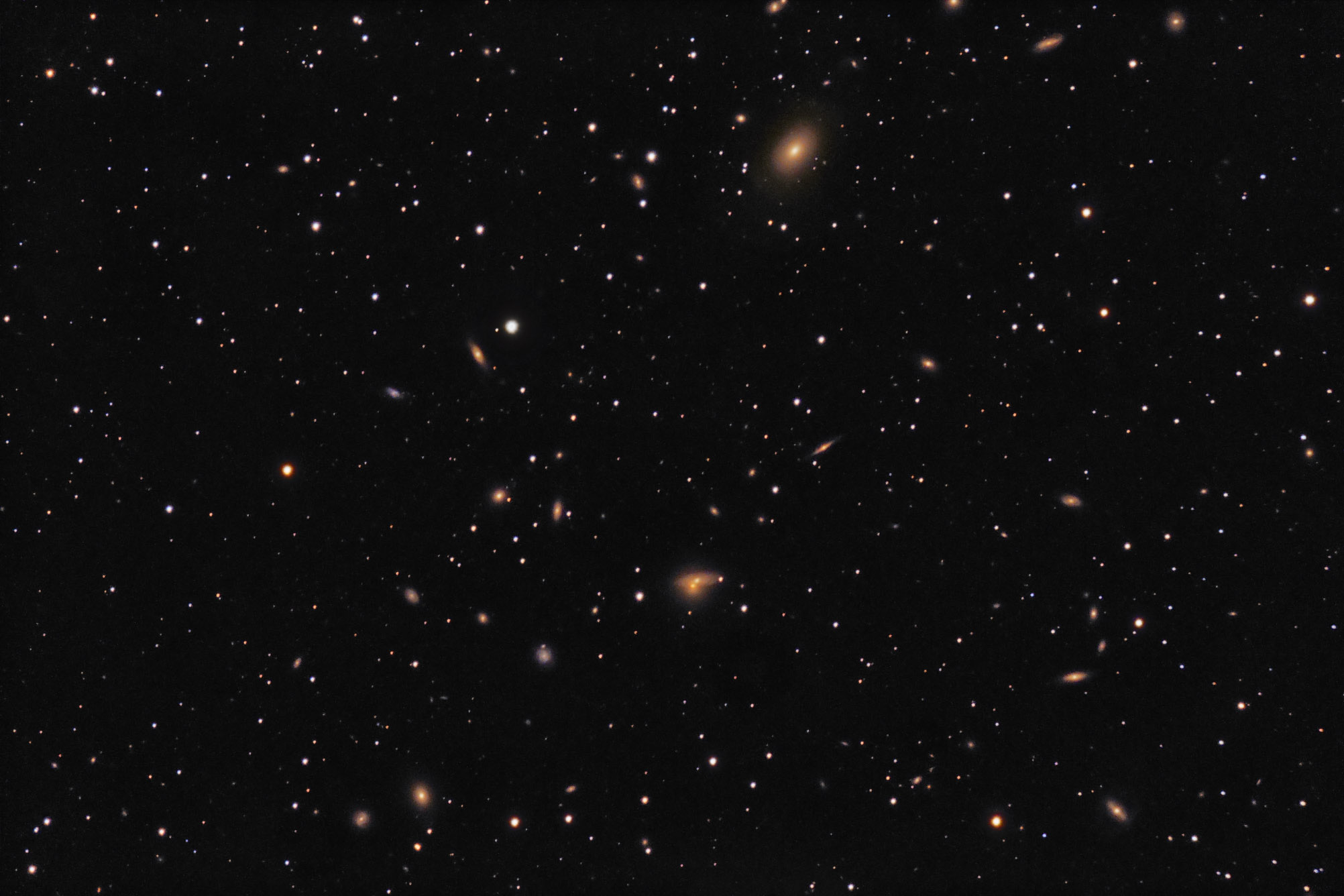