NGC 6211 was on my list for three reasons. First it was an odd galaxy, secondly it was a very red galaxy and third, it was part of a chain of red galaxies, all apparently at the same distance. I finally got around to it on June 17, 2013. The several years delay turned out to be serendipitous. Unknown to me, on May 29th supernova 2013cw blew up in the galaxy. I didn\'t discover this until I went to process the image. So there was the fourth reason to look at this galaxy though I didn\'t know it at the time.

All 4 galaxies in the chain are at a redshift look back distance of 240 million light-years. This makes NGC 6211 about 100,000 light-years across. Besides its large amorphous red halo, it has a bright white core region that has a couple bright regions besides the very core. Just outside this is a dark band in some areas. At first, I thought I\'d done something stupid to create this band when processing it but it is seen faintly in the raw FITS files so is real, just enhanced due to the curves used to bring out the blobs in the core. I didn\'t process the core region separately, it got the same curve treatment the halo did and as did the rest of the field. NGC 6211 is also known as UGC 10516. The other galaxies in the chain are also part of UGC 10516 being noted in NED as Notes 1, Notes 2 and Notes 3 in order of increasing distance from NGC 6211/UGC 10516. UGC 10516 Notes 1 is also known as NGC 6213. CGCG 299-018 is Notes 2 and CGCG 0299-019 is Notes 3. The two NGC galaxies were found by Lewis Swift on June 25, 1887.

There\'s yet another red galaxy in the image down in the lower left corner. I moved the chain left of center to pick it up when making the image. It is the SO/a galaxy UGC 10500 and it too is at the same 240 million light-years distance by redshift as the others. It has some hints of blue but is mostly red like the other 4.

While there are a lot more galaxies and likely at least one galaxy cluster or two in the image, NED had no redshift data on any of them, including one chain member. All 9 galaxies in NED are identified in the annotated image.

This is the last of only 9 objects I was able to catch in June. Short nights and poor skies limited what I could do. July was little better with only 10 new objects captured. 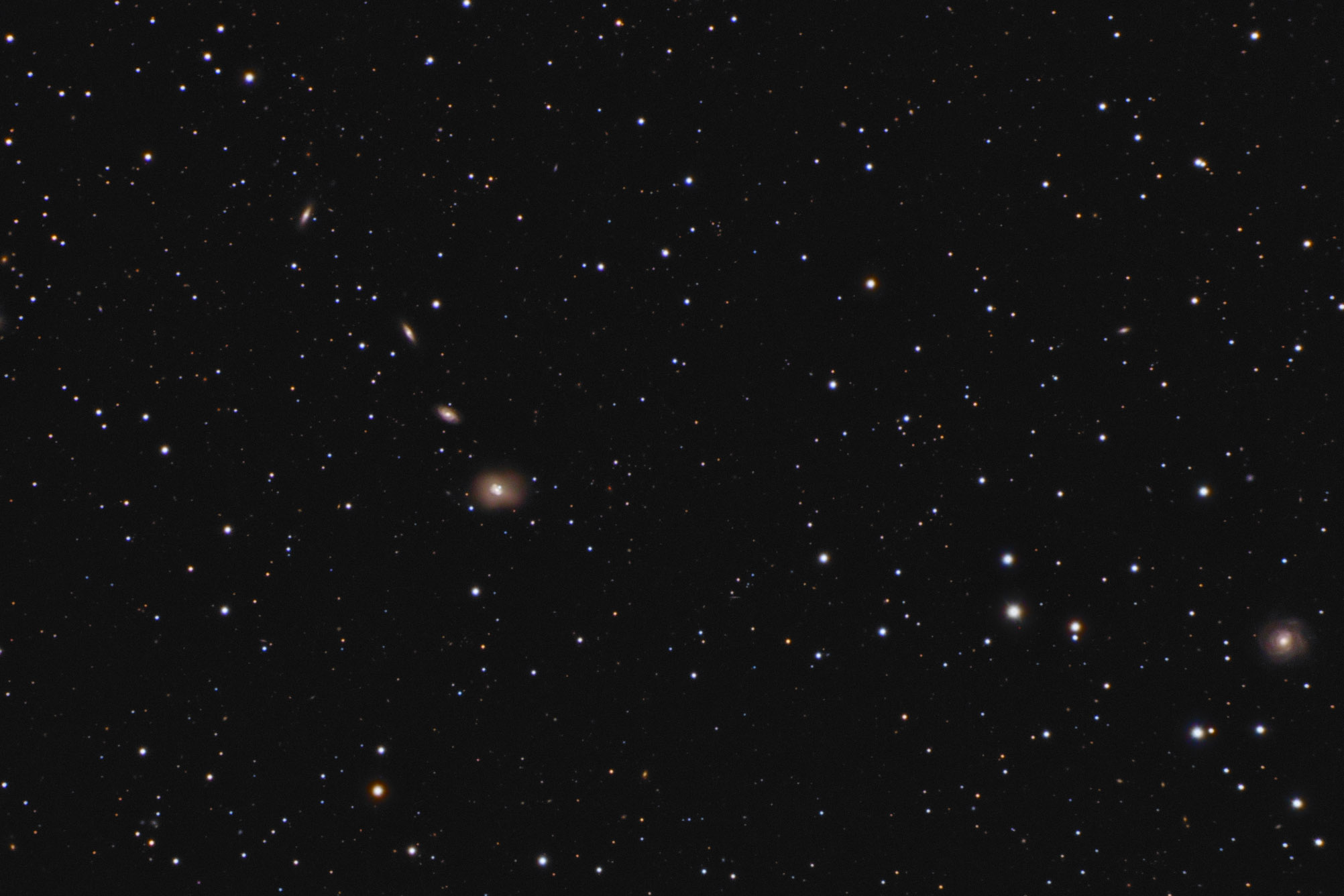 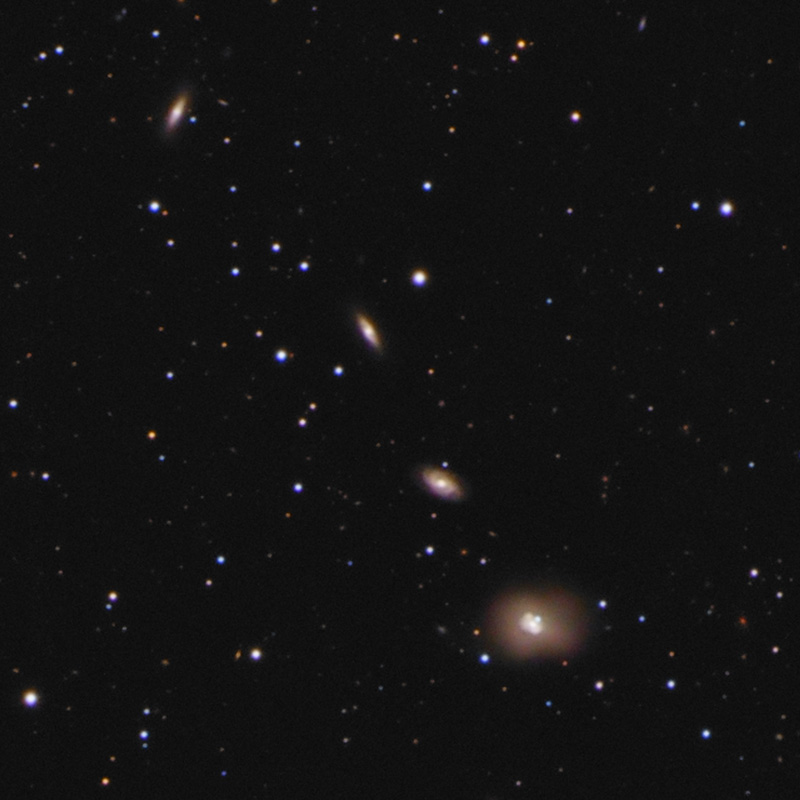 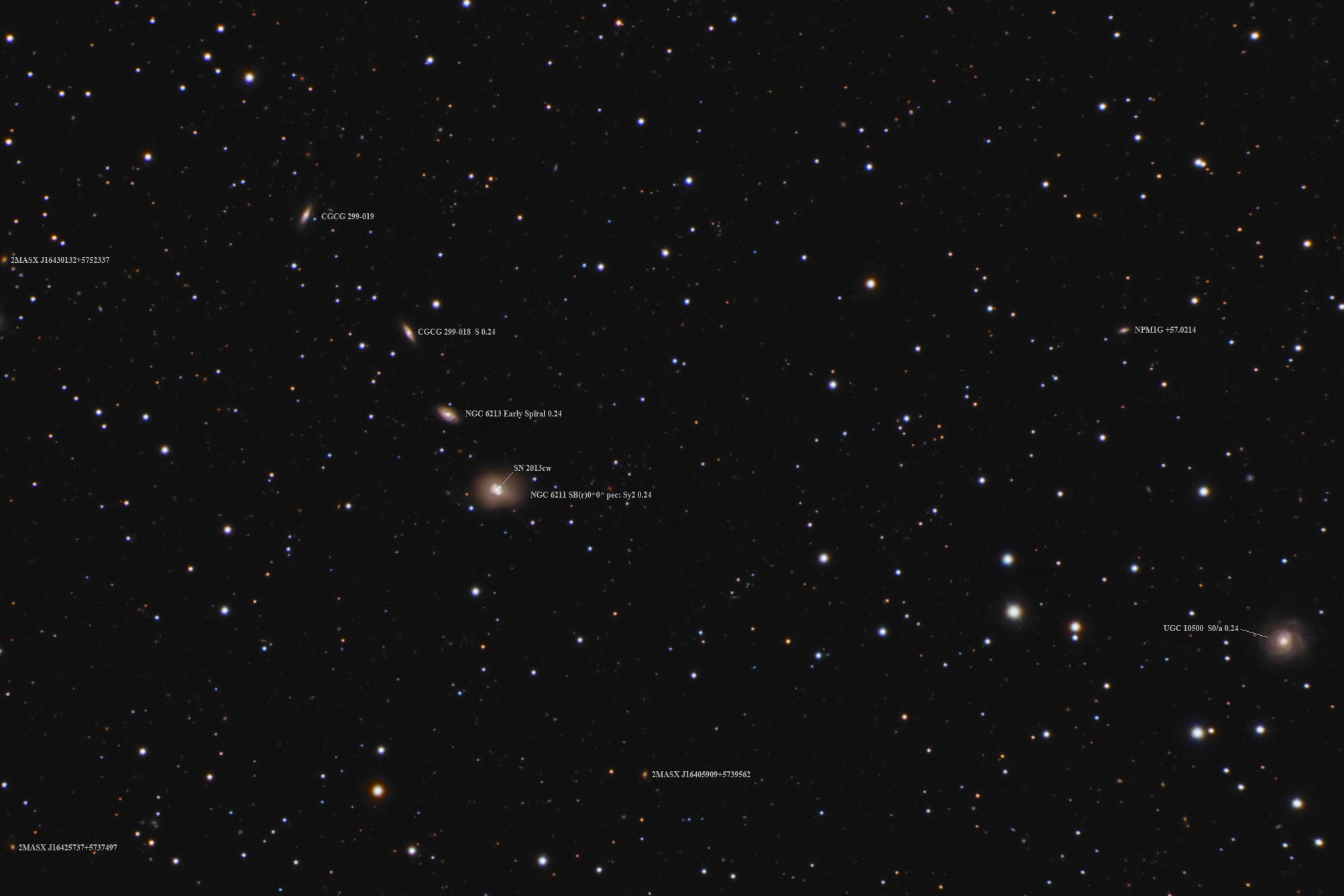