This field in Hercules contains part of the NGC 6329 galaxy group anchored by that large elliptical galaxy. The group is about 370 million light-years distant by redshift measurement. While the group contains some galaxies west of this field most of them are to the east of NGC 6329 so that\'s what I aimed for. I planned to get the eastern galaxies in a later shot but this was the last night I could image for over a month so it never happened as the group was too far west by the time the weather improved. Maybe next year.

NGC 6329 is nearly 250,000 light-years across by my measurement. Truly a huge elliptical galaxy. It was discovered by Édouard Stephan on July 11, 1876. Its core is a strong X-ray source. NED and the NGC project classifies it as simply E while Seligman says E0? Other than that I found little on it.

NGC 6327 lies to its southwest. It is listed by NED as a compact galaxy as does the NGC Project and Seligman though he adds 2 question marks. I found no redshift for it at NED. It too was discovered by Édouard Stephan a week after he found NGC 6329, on July 18, 1876. With no redshift to go by and assuming it is a member of the group which seems likely, it is \"only\" 74,000 light-years across. Large for a compact galaxy.

NGC 6332 is a rather red spiral galaxy. It is listed as Sa by NED and the NGC project but Sa? by Seligman (only one question mark this time). It was discovered by Édouard Stephan the same night as NGC 6329. Including its faint plumes, it is a huge spiral at 240,000 light-years in size by my measurement.

The last NGC galaxy is NGC 6336 a small spiral galaxy a bit bluer than NGC 6332 but still redder than I expected. It is classed as SAB(s)a by NED, SBa by the NGC project and SBa? by Seligman. It too was discovered by Édouard Stephan the night he found NGC 6332 and 6329. I measure it at 119,000 light-years in size. A bit larger than our galaxy.

There\'s one IC object in the frame but is an error by Guillaume Bigourdan. He saw the double star as a \"cluster, very small, nebulous, very faint double star involved\". At least that\'s how Dreyer portrays it. The double star is correct but obviously not the rest. He also had a 2-degree declination error in everything he did that night. Apparently June 1, 1897 wasn\'t a good night for him.

Most of the galaxies in the field don\'t have redshift measurements. It is likely they too are members of the NGC 6329 group so it wasn\'t deemed worth the effort to get spectroscopic data on but the major ones. That\'s my idea anyway.

The field contains quite a few quasars. They pretty much disprove Arp\'s theory that they are nearby objects ejected from active galaxies. While these are large galaxies they don\'t begin to have sufficient activity for his now discredited theory. 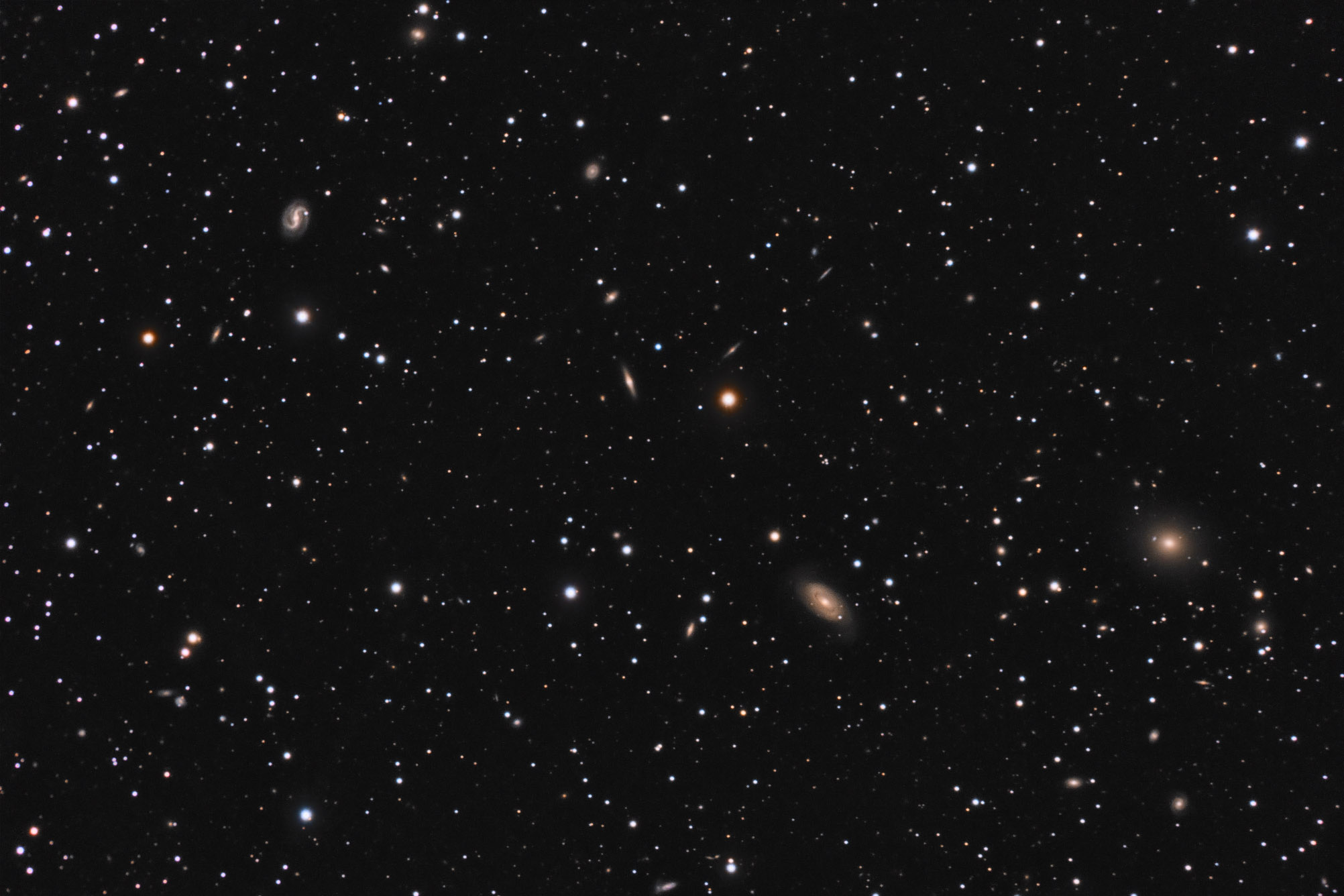 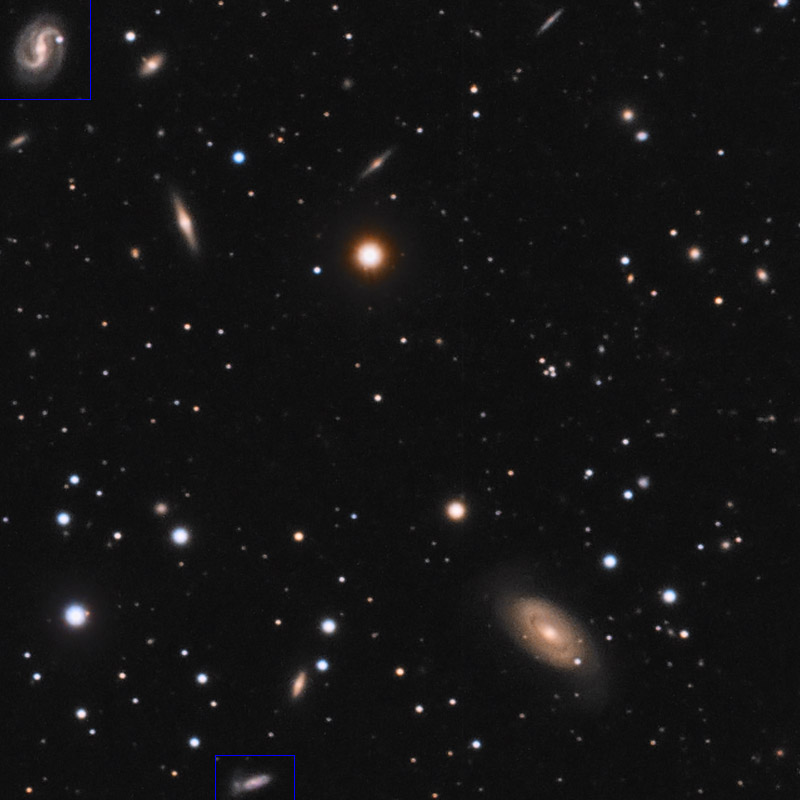 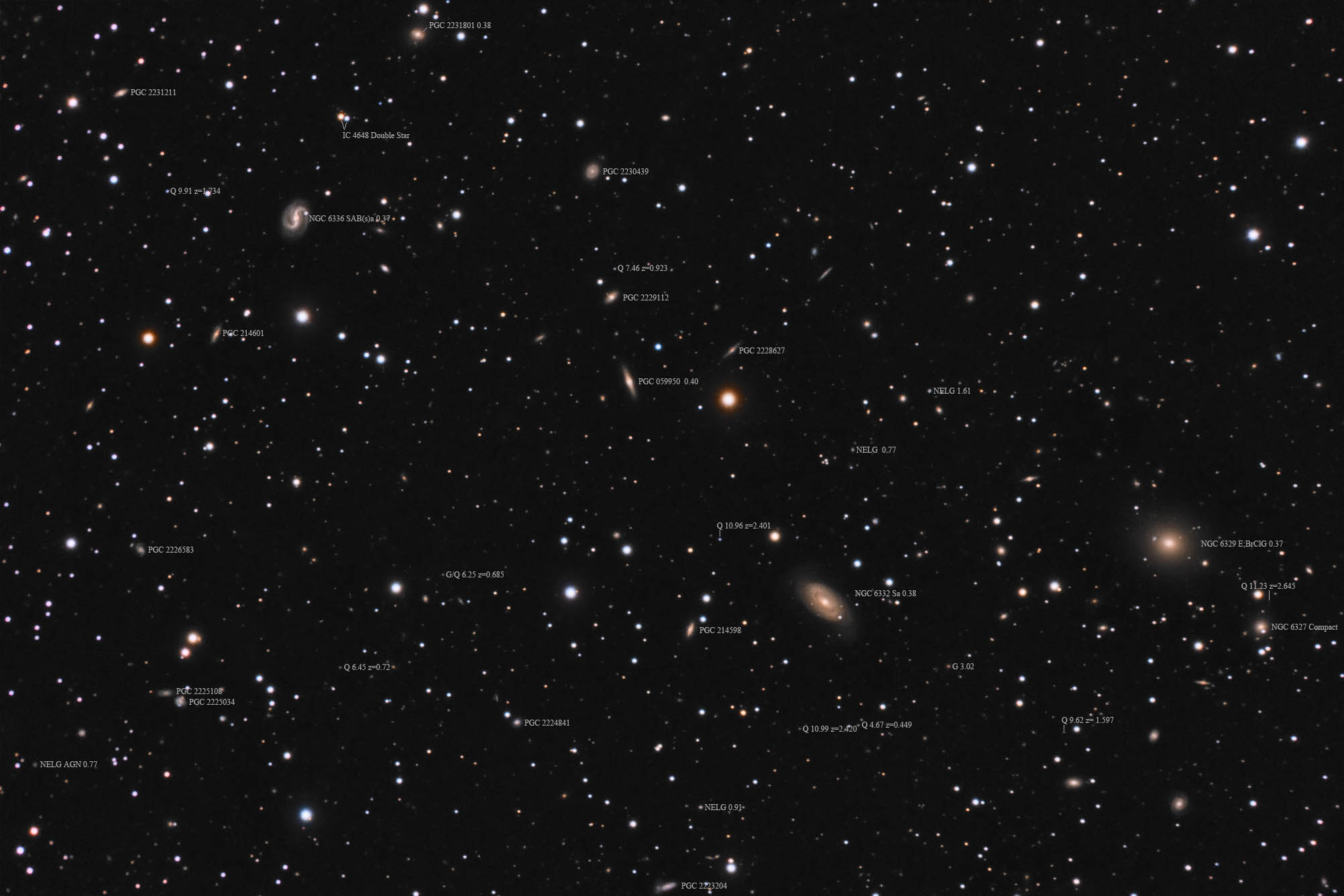