NGC 6340 is a rather odd face on SA(s)0/a galaxy in Draco I\'d wanted to image but was hidden behind my Polaris trees. Redshift puts it about 53 million light-years away though a single Tully-Fisher measurement says 71 million. Note there are 3 other galaxies with redshifts between 52 and 57 million light-years and a pair in the 67 to 74 million light-year range. What this says I don\'t know. None of these have any distance measurement other than redshift.

What drew my attention to NGC 6340 was a note I found saying it had a very faint straight dust lane right through its core. It is only faintly seen in my image, especially on the west (right) side. It can be faintly followed to the eastern side but I\'d never had noticed that without the note to guide me. A note indicates it is not seen in NIR (Near Infrared).

The arm structure is very faint. I\'ve enhanced it in this image more than I normally enhance galaxy contrast. Note the spiral is not symmetrical. It is compressed on the south (bottom) side compared to the north side. It has a LINER nucleus so while the overall reddish color would indicate star formation has been low for many millions of years the core is still actively feeding on something. It was discovered by William Herschel on June 6, 1788. It isn\'t in either H400 program.

To its north is IC 1251, an Scd? galaxy with about the same redshift. It looks a bit torn up. Has it interacted with another galaxy in the group?

West of IC 1251 is IC 1254 also about the same redshift. It is classed as Sb? pec. It definitely has plumes indicating interaction in the recent past. Was that NGC 6340, IC 1251 or something else or something it merged with? Lots of questions but no answers. Both IC galaxies were discovered by Edward Swift on September 18, 1890.

The fourth galaxy with about the same redshift is PGC 059705. While the first three are mentioned at NED as being part of a group of three galaxies, PGC 059705 is ignored. Why isn\'t it part of the group? I have no idea.

How do the two galaxies just northeast of IC 1254 fit in? Still more questions without answers I could find.

Except for three galaxy clusters no other individual galaxy had a redshift measurement in NED but for one, RX J1712.5+7218 an X-ray galaxy found by the ROSAT X-ray orbiting telescope. The line I drew in the annotated image goes to the position NED had for it. ROSAT had poor resolution so its positions are uncertain with a 50 second of arc error circle. Could one of the two galaxies just south of the position be the source? A note at NED says \"Eastern object in close pair.\" That would seem to fit the reddish object about 5 seconds of arc south of NED\'s position.

Since there was plenty of room I identified the other galaxies in the image with designations other than just their coordinates.

While the field is covered by the Sloan survey none had Sloan determined redshifts so the annotated image is rather sparsely labeled. 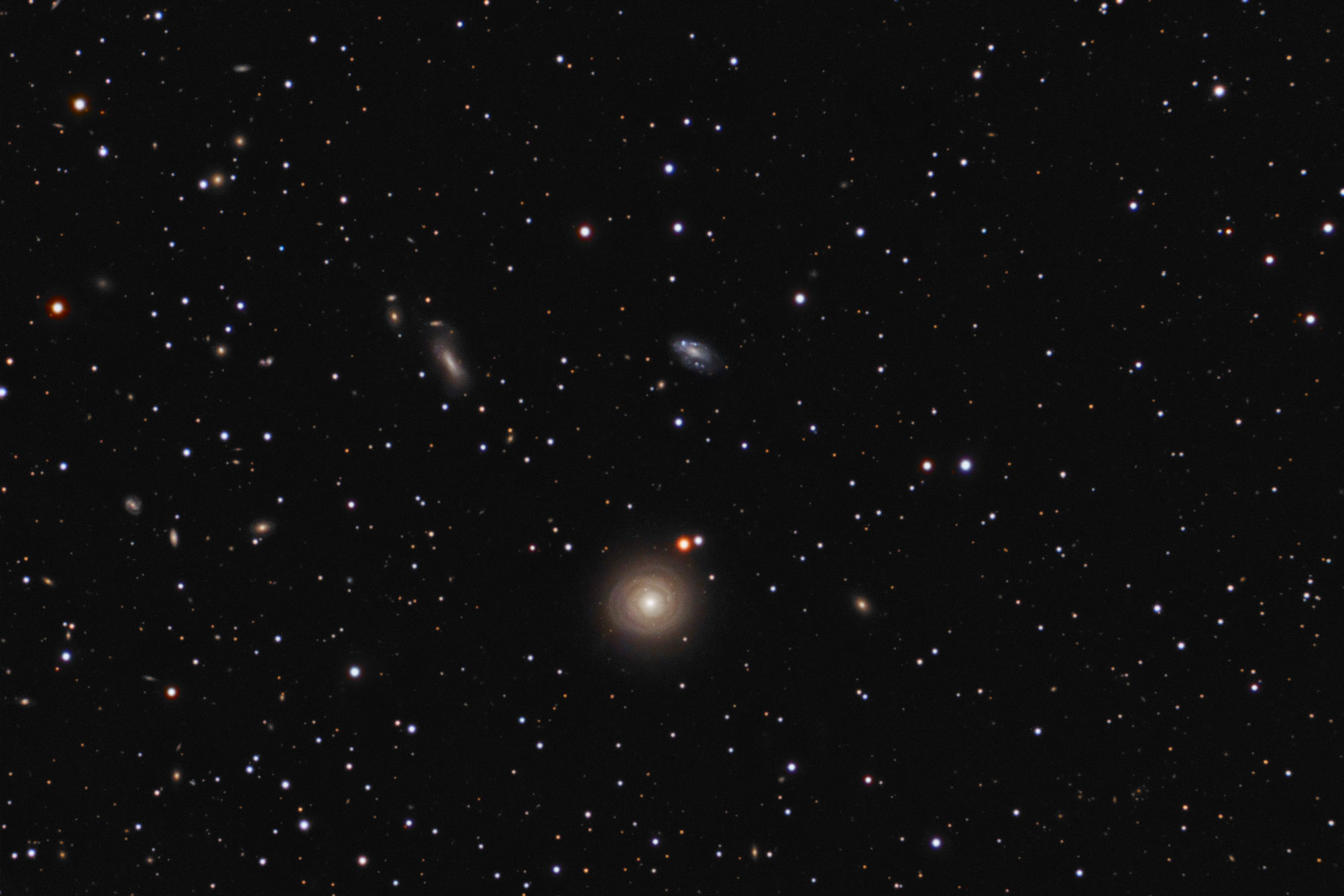