This is a shot of a galaxy in our local group, NGC 6822, commonly known as Barnard\'s Galaxy as he discovered it with a 6\" refractor over 120 years ago. Located about 1.7 million light years away it is a dwarf galaxy. Oddly, it shows little rotational motion, especially in the outer regions. It is full of bubbles blown by newly formed star clusters. The biggest and brightest is actually called the Bubble Nebula, not to be confused with a very different Bubble Nebula formed by a dying star in our own galaxy that I\'ve run here twice before. This is caused by a cluster of super massive, super hot stars that formed out a a cloud of hydrogen gas. Then their intense light blew an ever expanding bubble in the remaining hydrogen. In a few million years the bubble will have expanded so much and so many of the stars that formed it will have gone super nova that it will vanish. This bubble is huge compared to those known in our galaxy. Most of which are 30 or so light years across. This one is about 500 light years in diameter! To be illuminated by stars 250 light years distant you know those stars are super bright!! Actually, this galaxy has many such bubbles, far more than most dwarf galaxies have. NGC 6822 is thought to be very similar to the galaxies that first formed in our universe and which then combined to form more massive galaxies such as our own. Though why it still has so much dust and gas left is somewhat of a mystery. Since we see this galaxy through the dust of our own galaxy it is greatly dimmed and reddened. It would be far bigger and brighter if it was located in a direction looking out of our galaxy rather than into it.

The Hubble Space Telescope can only look at a very tiny part of this object at a time. It studied two of the HII star forming regions, Hubble X and Hubble V. Hubble X is at the upper left of the somewhat faint pink bubble at the top and slightly left of center of the galaxy. It appears as a bright white star at the upper left edge of the ring. In fact, it is a star cluster tightly surrounded by nebulosity, all of which overexposed in my shot to make a white blob. The bubble is apparently an entirely different object unrelated to Hubble X. You can see Hubble\'s picture of it in false color at:
http://apod.nasa.gov/apod/ap010216.html

Hubble V is to the right of Hubble X about halfway to the big bubble nebula. A bright star overpowers it to the left of it. Then the cluster of stars that causes it to glow drowns out the much fainter nebula at my low resolution compared to Hubble working above our atmosphere. So only a hint of pink is seen at: http://apod.nasa.gov/apod/ap011225.html This time the colors are close to correct.

You can read more on it at:
http://www.messier.seds.org/xtra/ngc/n6822.html
The photo with this page though seems overly blue but it was taken using film which does often respond very differently than reality in long exposure photos. Also, this page puts the distance at 1.8 million light years which is an old estimate best as I can determine. Some links at this site are broken. 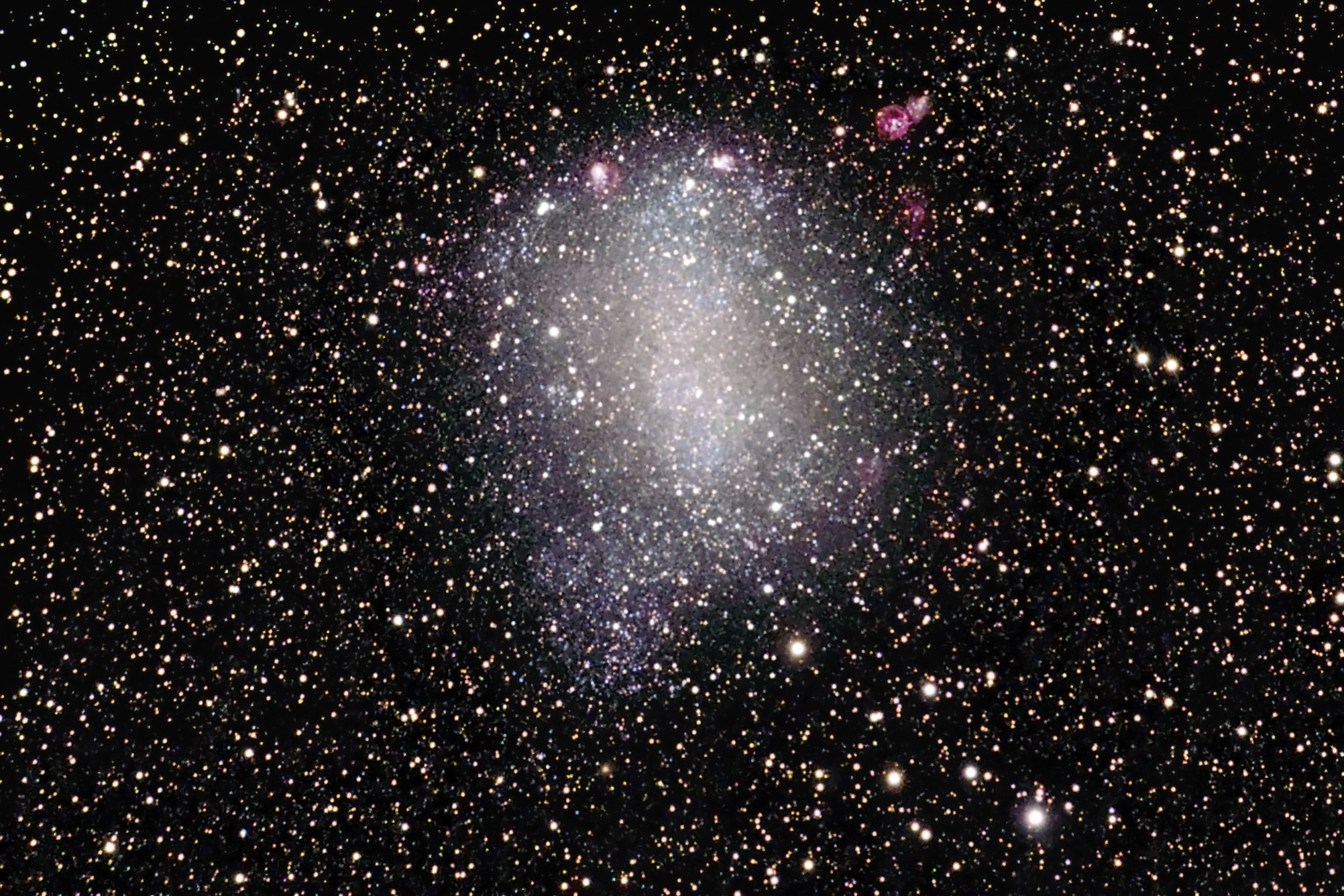