NGC 6882/6885 is a star group in Vulpecula. It may be made up of several groups. WEBDA has nothing on it but a position. It is Trumpler class III2p so little to no concentration, made up of stars covering a wide brightness range and star poor. I find no distance for it or much of anything in fact. It carries two NGC numbers since it was found by William Herschel on two consecutive nights. September 9, 1784 and September 10, 1784. There\'s nothing of interest at the position of NGC 6882 but there is for NGC 6885. The position for 6882 lies at a bare region within 6885. To me, the cluster is made up of several groups as mentioned above and it may be Herschel saw one of these groups as 6882 but got the position wrong. He got several other objects positions wrong that night. As Dr. Corwin says \"WH was clearly not up to snuff that night...\" I\'ve had too many of those nights so I\'ll cut William some slack here.

The first Herschel 400 lists both clusters as two separate objects. This confused me to no end it appears from my notes from May 20, 1985. I wrote of NGC 6885 as seen in my 10\" f/5 scope: \"Large scattered, open cluster of stars of all magnitudes. Mostly west of 20 Vulpecula (that\'s the bright blue star in my image). Dimmer stars seem to be centered about 4\' north and more condensed than the very widely scattered brighter stars. This may account for its two numbers in both catalogs. Dim stars center is about that of 6882.\" My comments for 6882 written at the same time read: \"See 6885 as I was unable to distinguish a second cluster anywhere in the area. 6885 is listed as 20\' across and this one only 4\' north so inside the other. Burnham, the Becvar catalog and Tiron make no mention of this object! Why not pick another Herschel object to replace this one -- say H-14-5 which is the bright arc of the Veil complex?\" I\'d forgotten all about this until I went to research this object after processing it.

I had to move the cluster low in the field. 20 Vulpeculae was sending horrid ghosts across the frame when placed higher in the field. Why moving it slightly south solved them I never did figure out. There are three rather bright stars just out of the frame to the north. They sent some nasty gradients into the frame as by moving the field south they almost came into frame. Fortunately, GradientXTerminator pretty much eliminated the problem.

As mentioned I couldn\'t find any distance for the cluster. Three of the brighter stars have Hipparcos data in The Sky which put them only about 120 light-years distant. 20 Vulpeculae is 10 times that at 1,140 light-years.

The weather was a problem while imaging this one. I had to sort through several nights of images to find those used here. Only one green image survived the cut as all others were lost to haze and clouds. Fortunately, the one had no satellite and I was able to make it do. 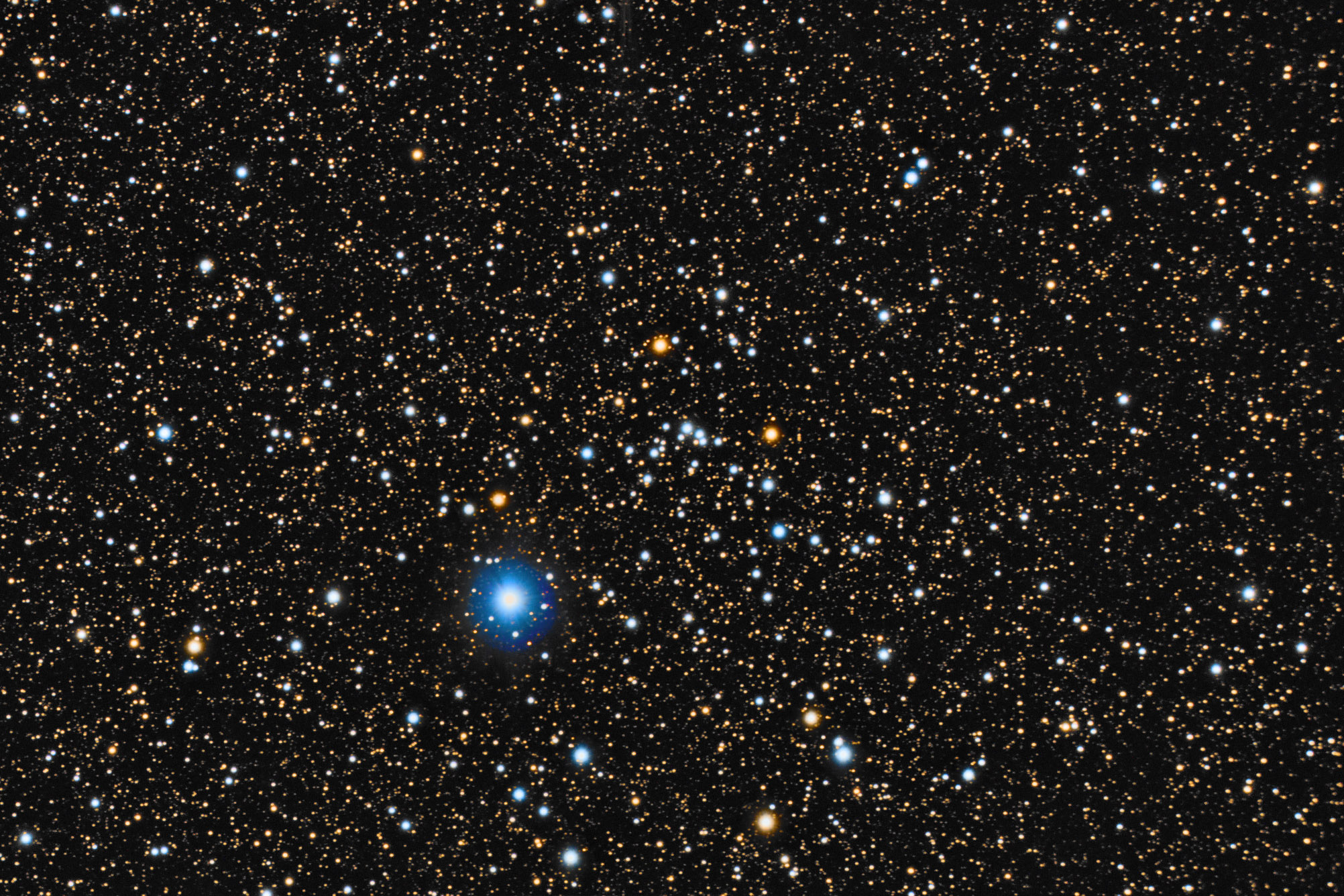