NGC 6928/2MFGC 15597 is a flat galaxy in the tail of Delphinus, about 190 to 200 million light-years distant. It anchors a small group of galaxies known as the NGC 6928 group. It makes the 2 micron flat galaxy catalog but not the more demanding Flat Galaxy Catalog. Probably not being seen edge on, determining if it meets those more stringent requirements is impossible. In my image I get the distinct impression the core is depressed, that is thinner than the dust lanes in front of it as if hiding behind them. If real it likely would appear very thin and without a core seen edge on. It was discovered by Albert Marth on August 15, 1863. Then on September 23, 1888 Lewis Swift found it. His discovery became IC 1325.

NGC 6930 to the southeast is another member at the same distance. It has a very close companion that too made the 2 Micron Flat Galaxy Catalog. How I can\'t fathom. It doesn\'t appear flat to me and is classed as a compact spiral though I see no spiral structure. It does have some interesting dust and seems distorted. Could it be interaction with NGC 6930? If so I found nothing in the literature on it. It does have an AGN in its core meaning its black hole is well fed. This could, but doesn\'t have to, mean it is interacting. Though NGC 6930 seems pretty undisturbed by the whole affair though it appears its northern end may be hiding behind this little galaxy. There\'s a star just east of its core making it hard to decipher what\'s going on. Albert Marth and Lewis Swift repeated their NGC 6828 duplication efforts finding this one the same nights. Swift\'s duplicate became IC 1326.

The third NGC galaxy in the image is the mostly featureless NGC 6927 also at the same redshift as the first three. It lies to the west-southwest of NGC 6928. Below it is NGC 6927A. A companion maybe but certainly doesn\'t appear to be interacting. Its redshift is the only one of the group that is even slightly different putting it about 190 million light-years distant rather than 200 million like the others. It is also the smallest. Albert Marth found NGC 6927 the same night as the other two but this time Swift didn\'t duplicate his efforts.

Several other galaxies are nearby such as the one directly below NGC 6928 that is unlabeled on the annotated image. It\'s not labeled because it isn\'t even listed in NED. Southeast of NGC 6930 is the 2MASS galaxy 2MASX J20330454+0951338 which is just its J2000 coordinates. This means it is pouring out a lot of deep infrared light but nothing else is known at NED, not even a magnitude. It appears to be a tight spiral to my eye but again NED doesn\'t attempt to classify it. Most of the faint galaxies in the image are not in NED but for a handful of IR rich galaxies that made the 2 Micron catalog. The only one with redshift data is another from the 2 Micron Flat galaxy catalog, 2MFGC 15581 in the upper right corner of my image. It doesn\'t appear all that flat to me but it made the cut. NPM1G +09.0506 to the southeast is also in the 2 MASS catalog but also made the Link Northern Proper Motion program so tired of long 2MASS names I used the NPM1G entry instead but it too is strong in IR light. 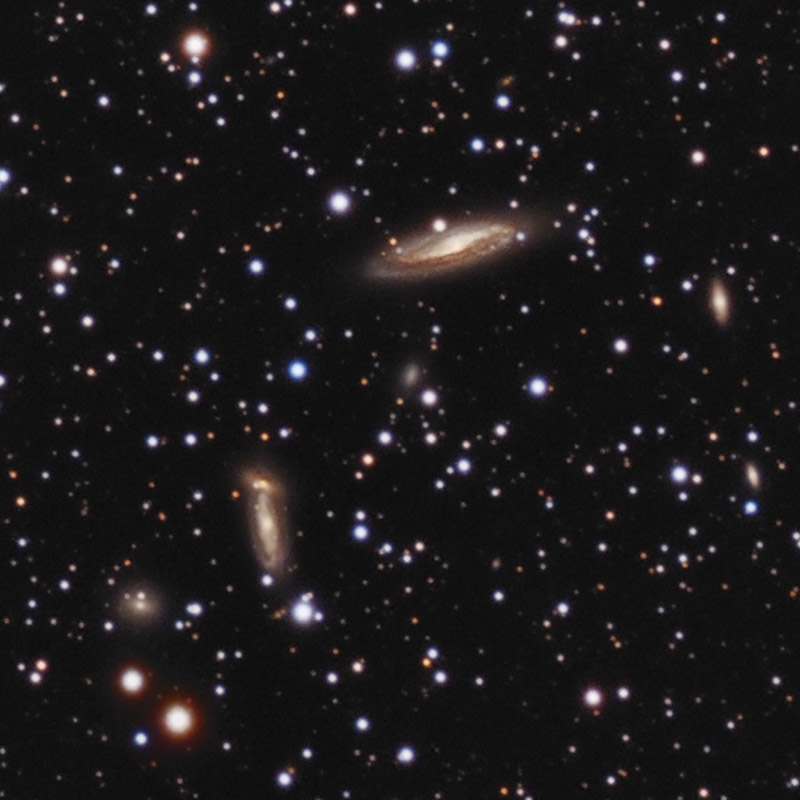 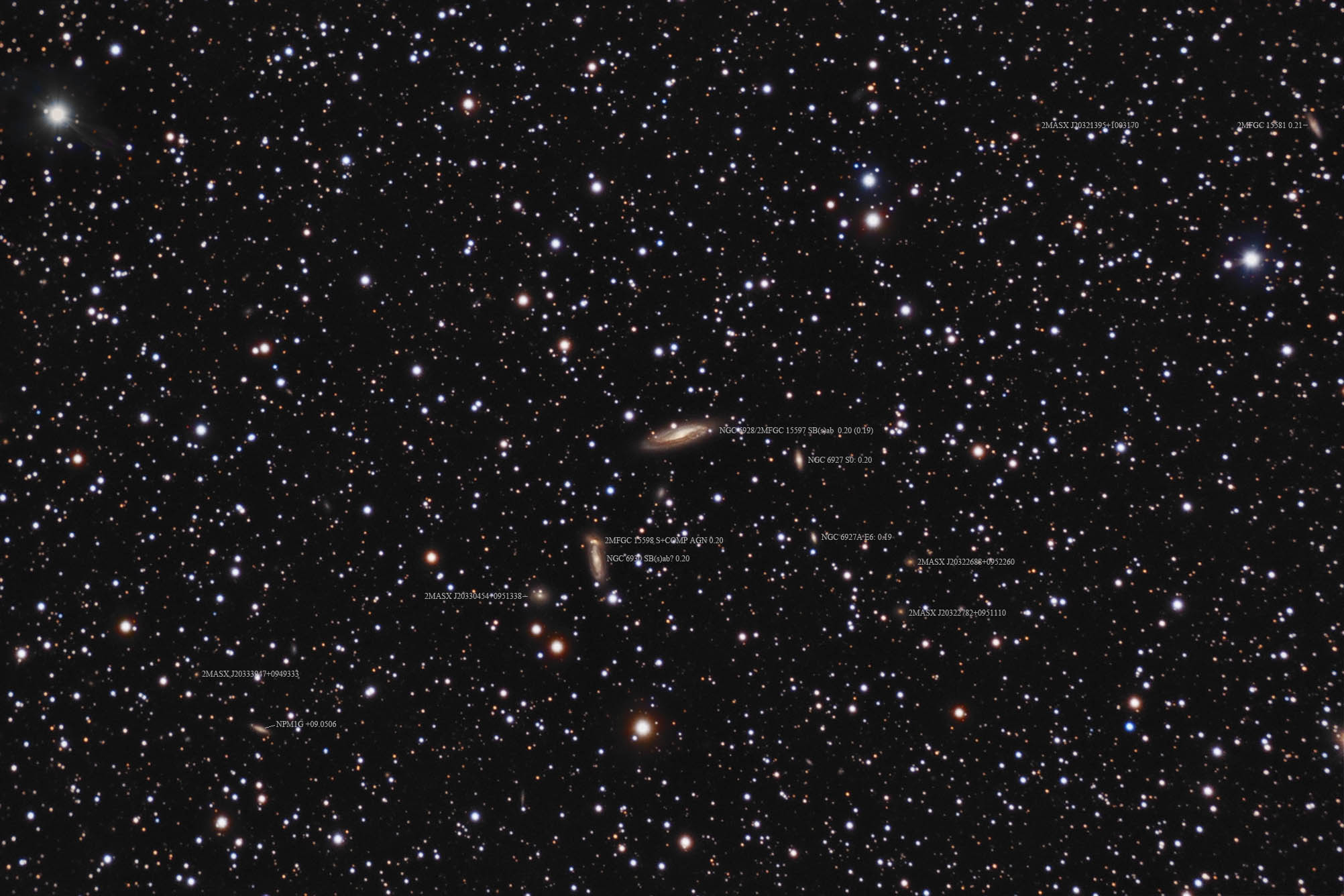 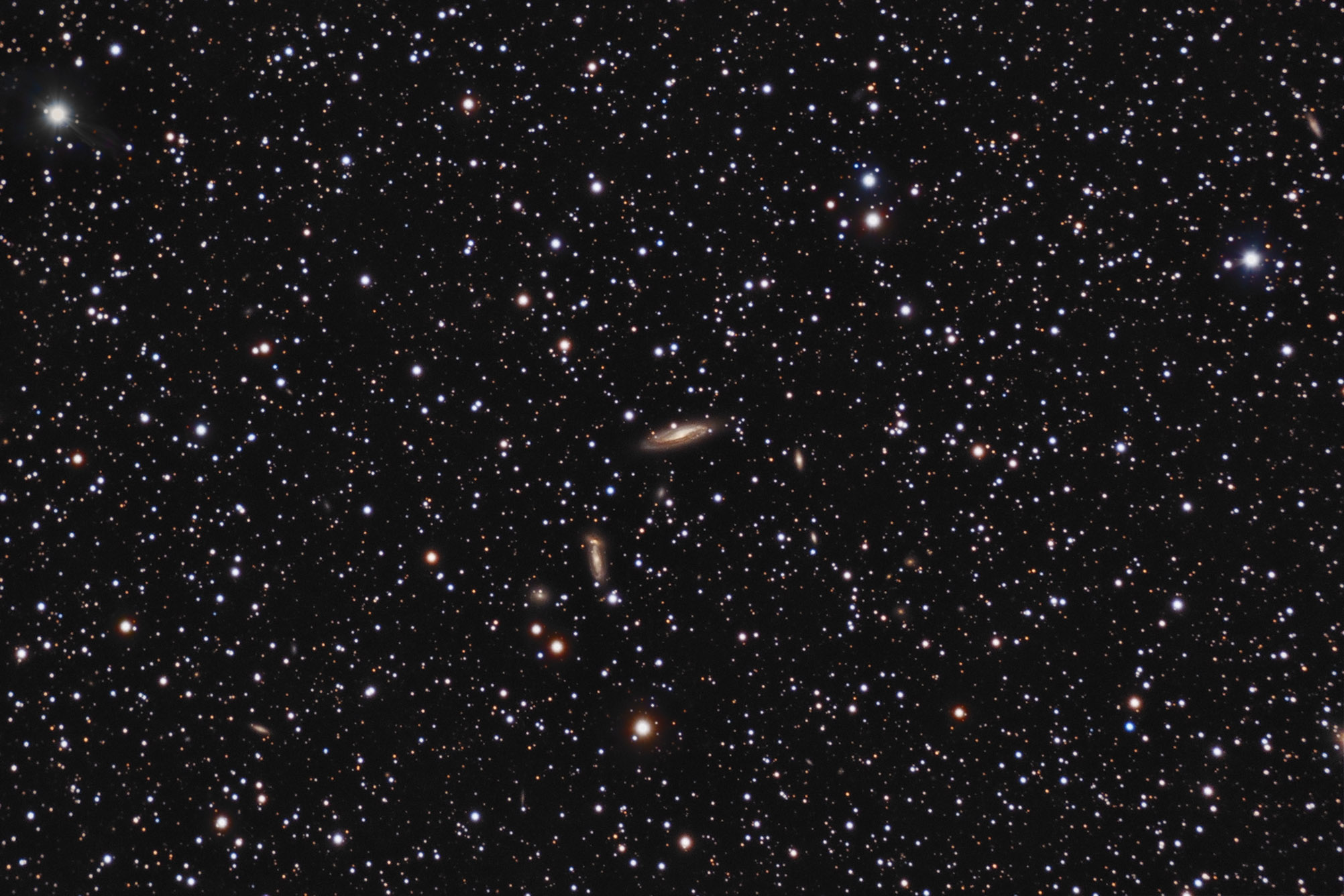