The Cygnus Loop is a huge bubble of gas blown by a supernova some 15,000 years ago about 2600 light-years from us according to the HST website. APOD says 7500 years ago and 1400 light years distant. Other sources give other figures but the ratio stays rather constant. In other words, this one is still rather unknown as to distance and time though the trend is making it smaller and nearer. It was said to be over 100,000 years old when I first learned of it nearly 60 years ago! Various parts of it go by various common names. Veil, Witches Broom, Pickering\'s Triangle and others. It also has several NGC and IC numbers. You need a system with over a three degree field of view to see the entire bubble, 6 times the size of the full moon. Like most bubbles, it is the edges that are the easiest to see as the gas there is thicker from our perspective. The portion in my frame is of the northeastern edge of the bubble known as NGC 6992. My field is way too small for even that so I have just part of it. I\'d need at least four such images to cover all of NGC 6992. That was my intent last summer but weather prevented it from happening. It took several nights just to get this one part.

What you are seeing is not pieces of the super nova\'s star. It blew in a rather \"dense\" region of the galaxy\'s disk. The explosion\'s shock wave hits this gas and causes it to glow much like ultraviolet light from a bright star can cause gases to glow. In this case, the energy comes from the shockwave, not light. It compresses and heats the gas it is going through creating a bubble of light we see as the Cygnus Loop. Hydrogen atoms glow with a very red color (a little blue as well but it is weak compared to the red) while oxygen glows with a cyan color somewhat between green and blue. The heat energy needed to excite the cyan OIII radiation is a bit different from that needed to create the red of H alpha and H beta. It is this difference in energy that is mostly responsible for seeing the red of hydrogen in one area and the cyan of oxygen in another rather than the elements being segregated in space. Notice that all around the loop it is the very front of the shock wave that has the most cyan from OIII with the Hydrogen mostly appearing a bit back from the shock front. This effect is seen completely around the edges of the loop. In the center where we aren\'t looking at the edge, such as Pickering\'s Triangle the colors pretty well mixed since we don\'t see that portion edge on.

Most images of this object are seen in narrowband images to better separate the elements in the shock front. I didn\'t begin to have the clear sky time needed for this so went with my normal LRGB image format. Still, the elemental separation is quite obvious. This part of the nebula was found by William Herschel on September 6, 1784. It is in the second H400 program.

As far as I can determine no one has found any remnant of the star that is causing this. 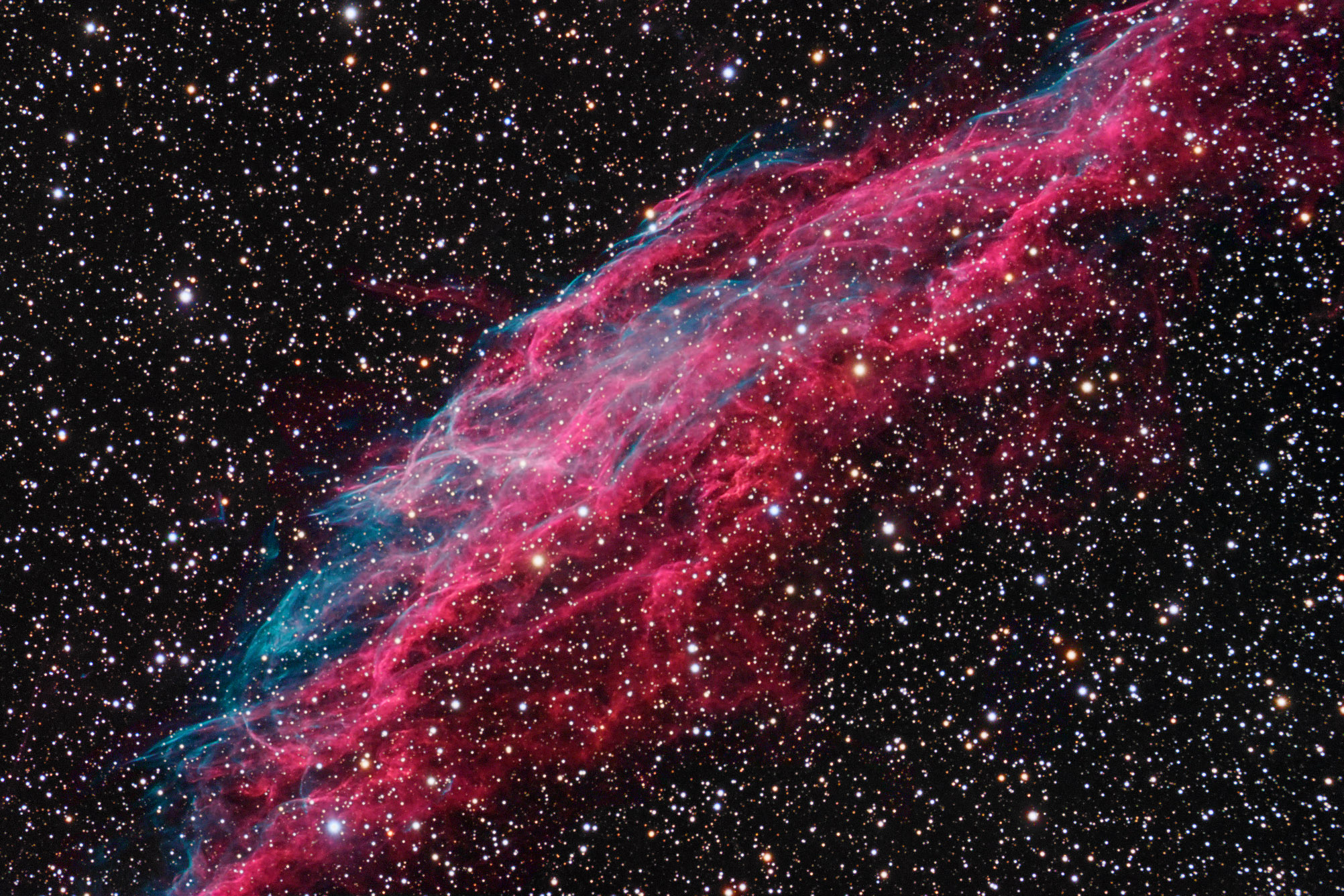