NGC 7081 is a peculiar galaxy in northern Aquarius. In fact, the top 25% of the image is in Pegasus just east of its border with Equuleus. It is classified as SB pec? by NED and S? by the NGC Project. Redshift puts it about 130 million light-years distant. It was discovered by William Herschel on October 10, 1790 but is in neither of the Herschel 400 observing programs. Its spiral structure is somewhat indistinct with many star knots being its most prominent feature. The odd organization would indicate it may have interacted with another galaxy in the recent past.

In this case we have a good candidate for the mugging, UGC 1176 to the southeast. It has the same redshift and it too is a rather odd spiral with star knots and one heavy arm. The latter would have qualified it under that category in Arp\'s catalog. His catalog has no entries for the 21st hour angle. This would also fill that gap. It is classified as SAB(s)bc pec? by NED. I guess they can\'t decide if either of these meet the peculiar requirements or not. While I found nothing indicating anyone has even considered if they are interacting it seems to me rather likely they did at one time.

If they truly are at the same distance then their cores are only 180,000 light-years apart. Certainly, that\'s close enough for them to feel the other\'s gravitational effects. Though neither is a huge galaxy. NGC 7081 is about 51,000 light years in diameter including the faint shell about it. UGC 11760 is somewhat smaller at 41,000 light-years across.

A second NGC galaxy is in the image on the far right. It is NGC 7077 a Blue Compact Dwarf. NED classifies it as E one place and S0 another. The NGC Project says E? while Seligman says E1?. I included it as in my framing sub it appeared to have a double core. I found one reference to it as having a double core. Turned out to just be a blue star. But between the blue star and the core is a star knot (lost in the glare of the star in my image). It can be seen in the Sloan image which I\'ve attached. Still, a star knot is not a second core to my way of thinking. Several other much fainter knots can be seen in the Sloan image as well near the core. Redshift puts it only 38 million light-years distant while the average of two non-redshift measurements say 50 million light-years. Using the closer distance it is only 5,700 light-years across so certainly is a dwarf in size. It was discovered by Albert Marth (#445 on his list) on August 11, 1863.

While a study was made of this area for emission line galaxies and over 100 are in the image they are all at the very limit of my image due to poor transparency this night so I\'ve not attempted to point them out. All the obvious background galaxies are also listed in NED but without redshift data so I\'ve not annotated them. I only annotated those with redshift distance that were easily seen and didn\'t look like a star just above the noise level. 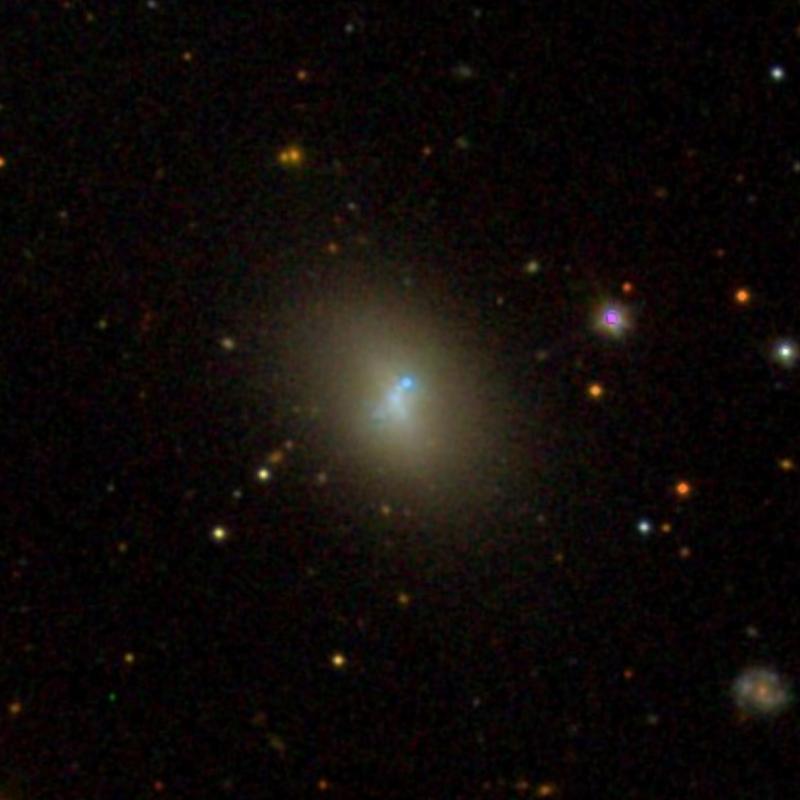 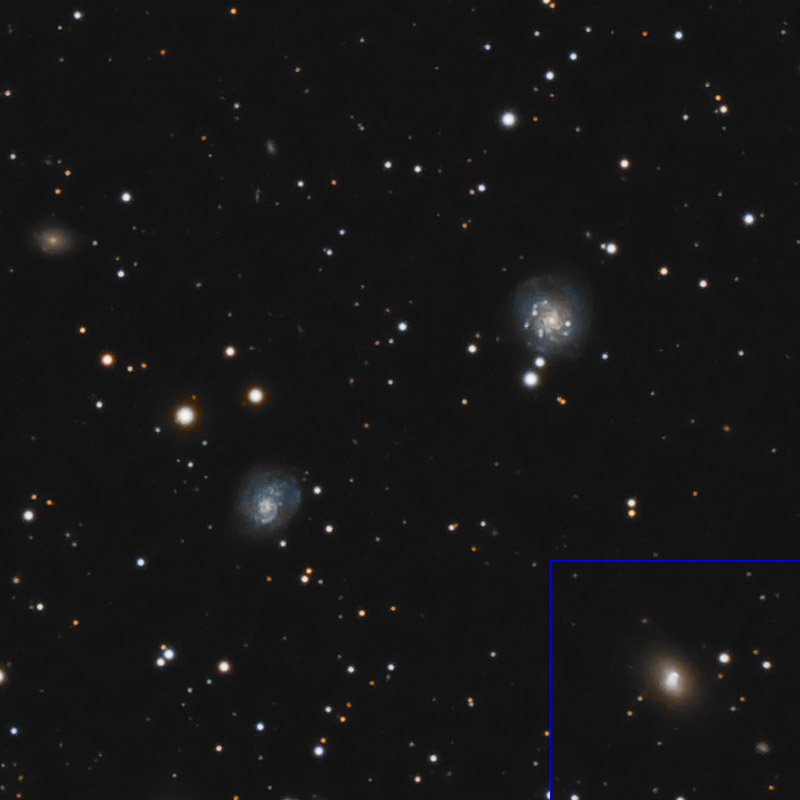 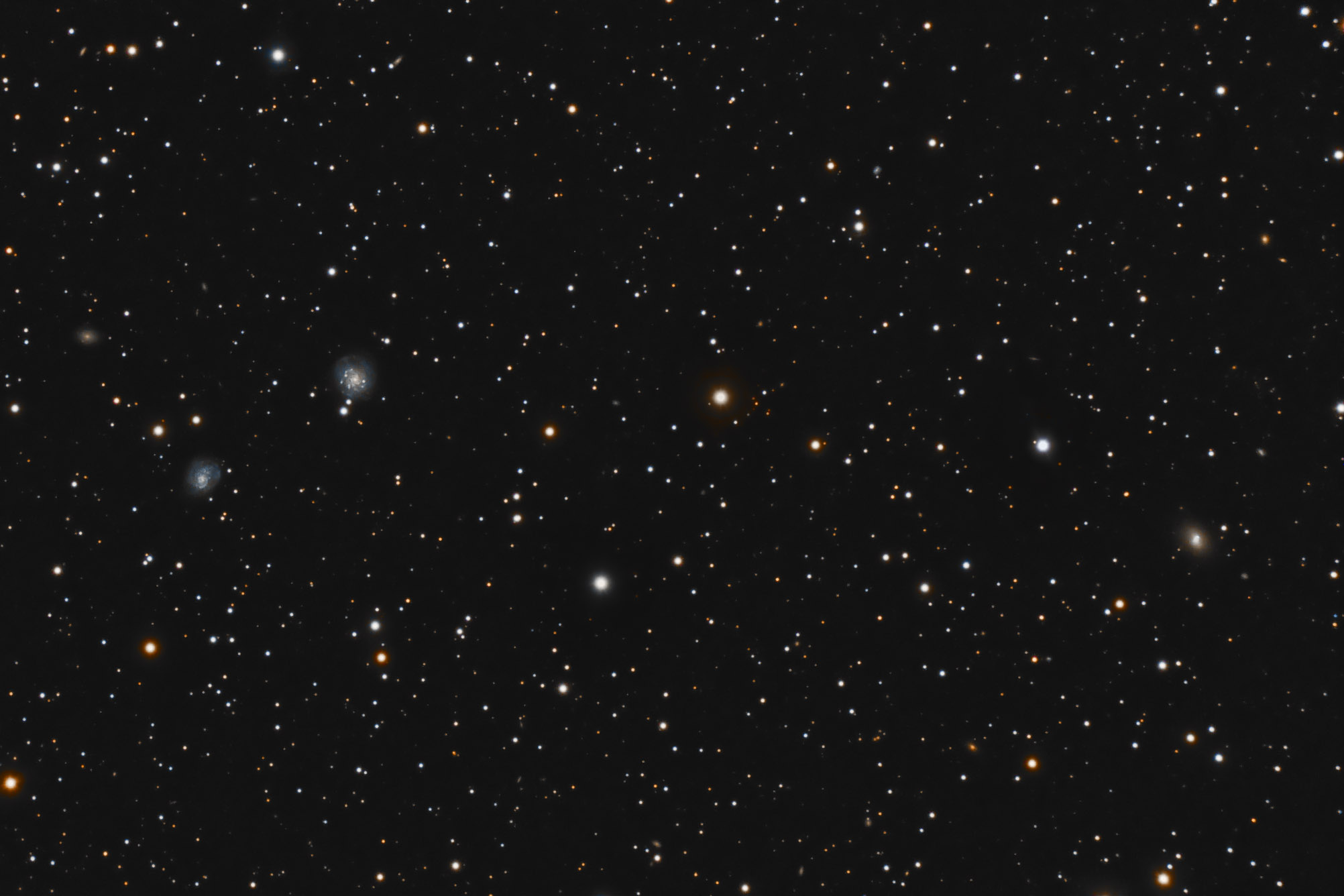