NGC is an \"Open Star Cluster\" in Cygnus about 1.4 degrees south-southwest of M39. It was discovered by William Herschel on October 19, 1788 and is in the second Herschel 400 program. That is why I imaged it. I certainly didn\'t image it because it was a great target. In fact, I can\'t see a star cluster here. There are some bright stars that visually make a possible cluster but half are blue and half are red. This could happen if we are seeing the cluster just as the major stars are turning to red giants. I find that unlikely but possible. John Herschel\'s observation of the cluster reads: \"A 10th magnitude star, the chief of a pretty rich, large, coarse cluster. Stars 10th to 13th magnitude.\" His position is off by a minute from that 10th magnitude star.

It may be smoke screwing up my photometry but I am finding the brighter stars in this image as 8th magnitude, not 10th. I still don\'t see what I\'d call a cluster. I am sure I logged this one when doing the second program but my log got lost in the move to Minnesota. I can\'t recall anything from 40 years ago when I likely looked at it. This one makes me wish I still had the log.

WEBDA does indicate this is a true cluster with an age of 170 million years. They put its distance at 5100 light-years with only 0.24 magnitudes of reddening. They frame the cluster much as I did but about 5 minutes of arc to the south of my center. Still, it appears the cluster is fully within my field, just where is the question. In the POSS 1 red image where the blue and red stars are simply white, there appears to be a scattered cluster. Seen in color, I expect the main stars to be of a similar color and thus the wide range blocks my brain from seeing it as a cluster.

This is yet another image saved from the severe smoke. I had great nights but all severely hit by smoke. In this case, the smoke caused severe halos around the 8th to 10th magnitude stars in the luminance frames that I found virtually impossible to deal with. I gave up in fact. This image is made from the best red, blue and green frames. By the time those were taken the smoke was even worse but dimmed things enough the halos were easy to deal with. While I had several good red frames I only had one green and while I used a blue frame it was severely dimmed by the smoke. I had to push blue severely to make the color image. I used all three as a pseudo-luminance frame without pushing the blue data meaning its more like green and red as blue was too weak to add much if anything. I found only two images on the net in color of this field. One with a DSLR that made all but a couple stars vivid blue. Since this is on the edge of the Milky Way I doubt that is at all correct. A second very short image of the center of the cluster does show the same color range I am getting but without anything below about 12th magnitude, it\'s hard to judge. Since my version is pleasing, if not correct, I\'ll leave it at that.

A very sharp-eyed viewer may find a faint galaxy in the upper left corner. It didn\'t record at all in the blue and barely in red and green. It is LEDA (PGC) 167461. I find nothing on it. It is just a faint smudge in my image so possibly a nearly face-on spiral.

Considering I can\'t really see the cluster I won\'t be revisiting this one even under the best of conditions. 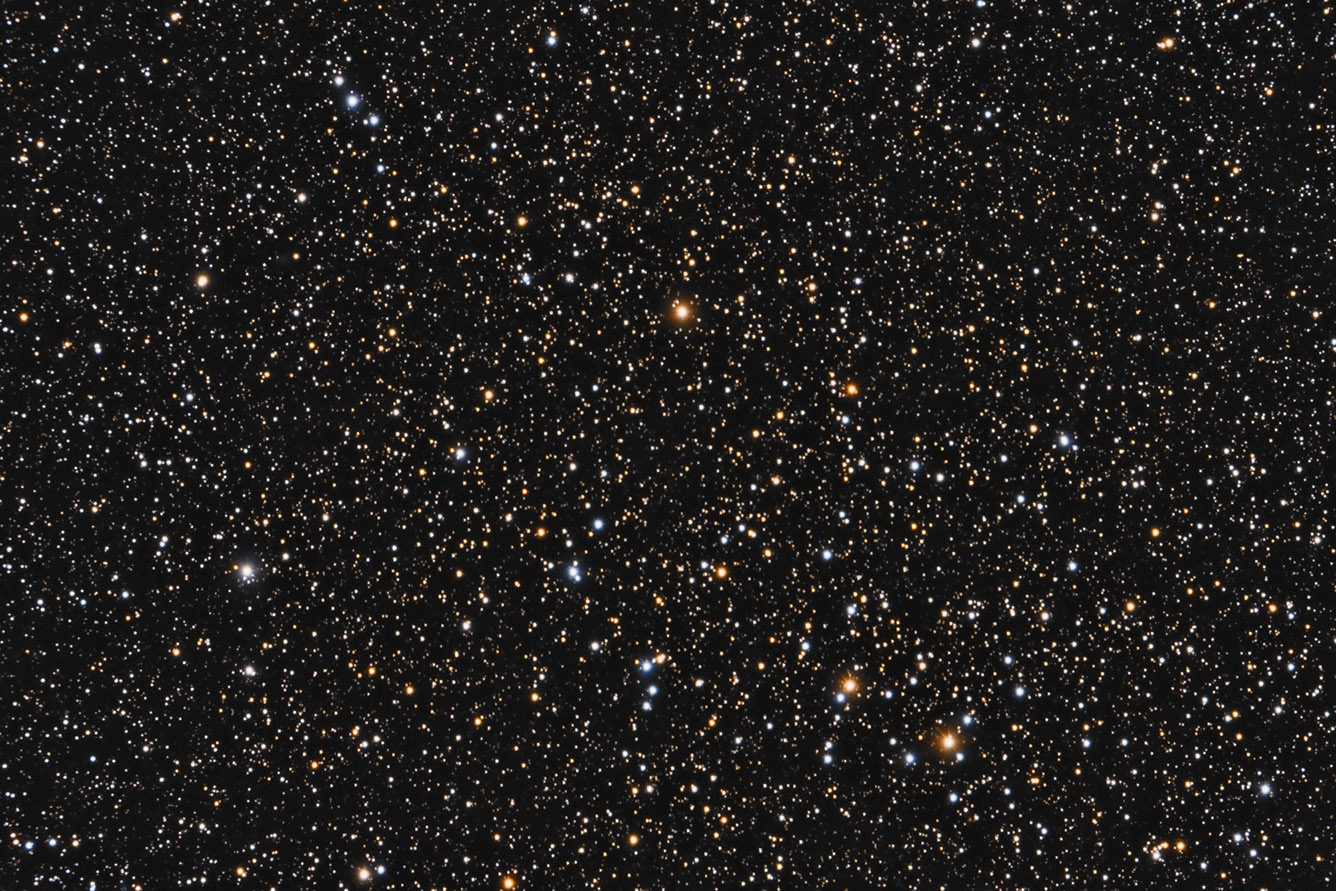