NGC 7156 is a face on SAB(rs)cd: spiral in southeastern Pegasus. It is about 72 to 170 million light-years distant. OK, most sources say the distance is unknown. NED, however, puts the redshift distance at more than twice the Tully-Fisher determination. That makes it either 33.5 or 79.1 thousand light-years across. If I had to vote I\'d say the redshift distance is likely closer to correct but that\'s just a guess.

It is a very lonely galaxy. It is considered an isolated galaxy. What attracted me to it was the odd broken arm south of the core. It just suddenly stops then restarts after a 9\" gap. Is this really a gap or is a dust cloud blocking that part of the galaxy? I suspect it really has the gap we see. The other reason it was on my list is I\'m slowly imaging the Herschel 400 objects I can reach from my 47 north latitude. This one is in the second 400 list. William Herschel discovered it on October 13, 1827. It is in the second H400 program. The NGC describes it as \"faint, pretty large, round, brighter middle, mottled but not resolved\".

Being isolated there\'s little on the field. While you will see a couple dozen obvious galaxies none had redshift data at NED. Only two quasars and some 22nd magnitude galaxies had any data. On a good night I could have picked up those 22nd magnitude galaxies but this was a poor night for transparency and the moon was brightening up the sky a bit which didn\'t help. I took 60 minutes of luminance data rather than my usual 40 but it didn\'t overcome the bad night and moon. The night really went bad when taking the green data which I saved for last since I can make a reasonable color image without it. One of the two frames was usable though noisy. I made it work.

Due to conditions, only one galaxy was bright enough for me to try and label though you will likely need to blow up the image to find it. It is label GP for galaxy pair which is NED\'s designation. For morphology they say Merger. So apparently it is two merging galaxies but at nearly 5.5 billion light-years I can\'t see much but a very faint smudge. The two quasars are also very distant but being quasars were bright enough I could pick them up even though one is nearly 12 billion light-years distant by light-travel time and the other not much closer, at a bit over 11 billion light-years. If not for them I\'d not have prepared an annotated image as there wasn\'t even an asteroid down to 24th magnitude in the field let alone one bright enough to get through my gunky skies. 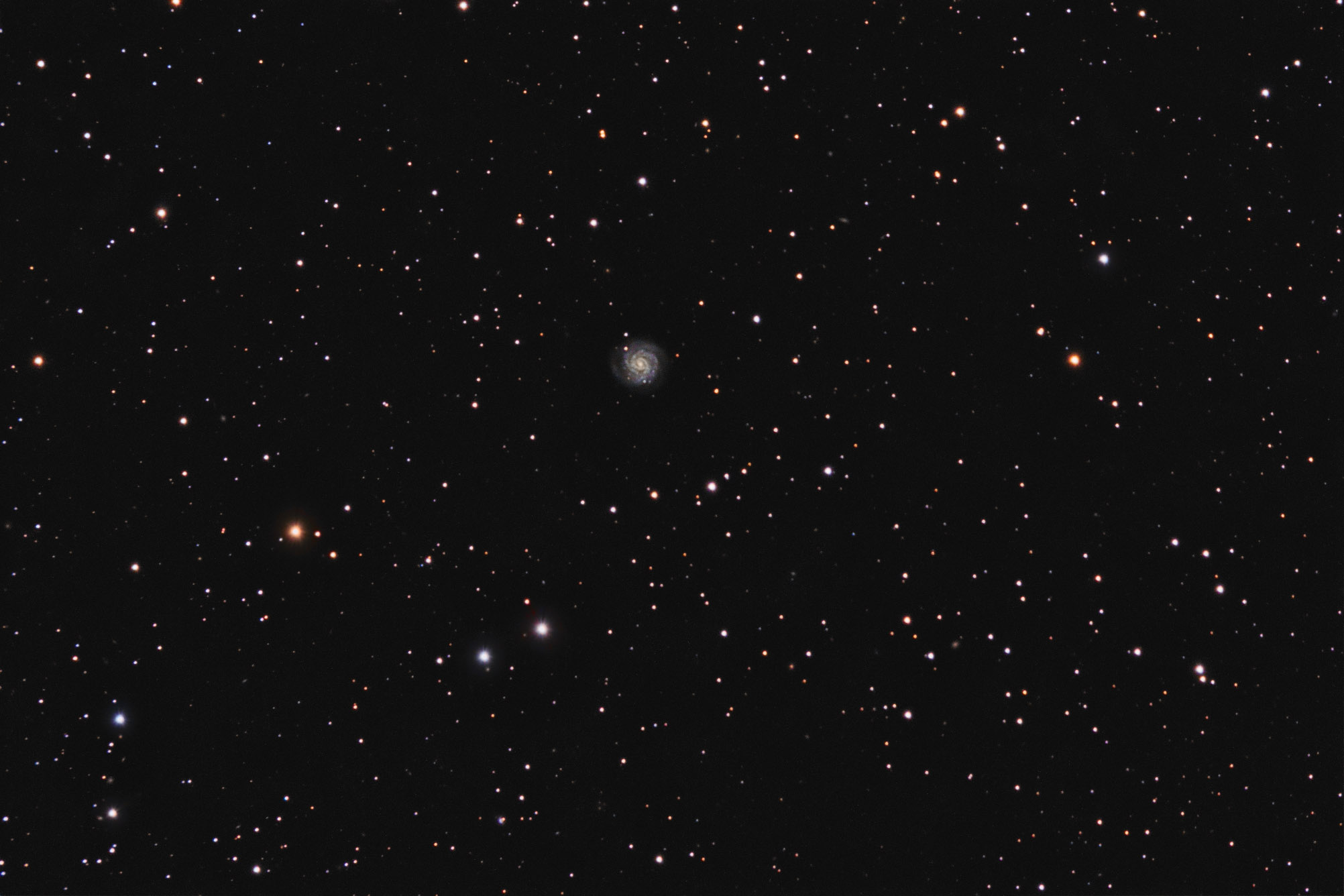 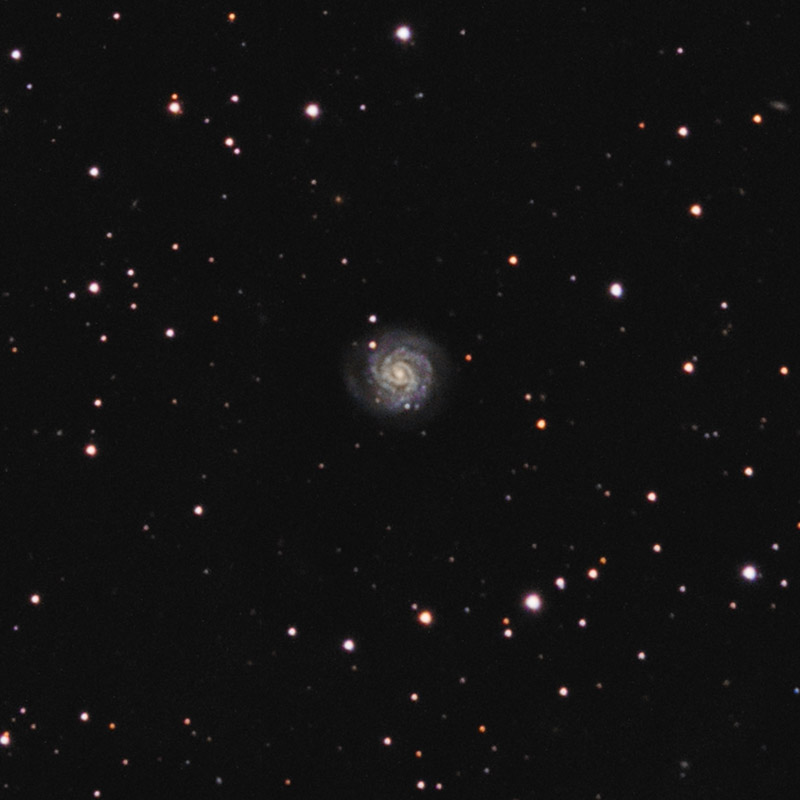 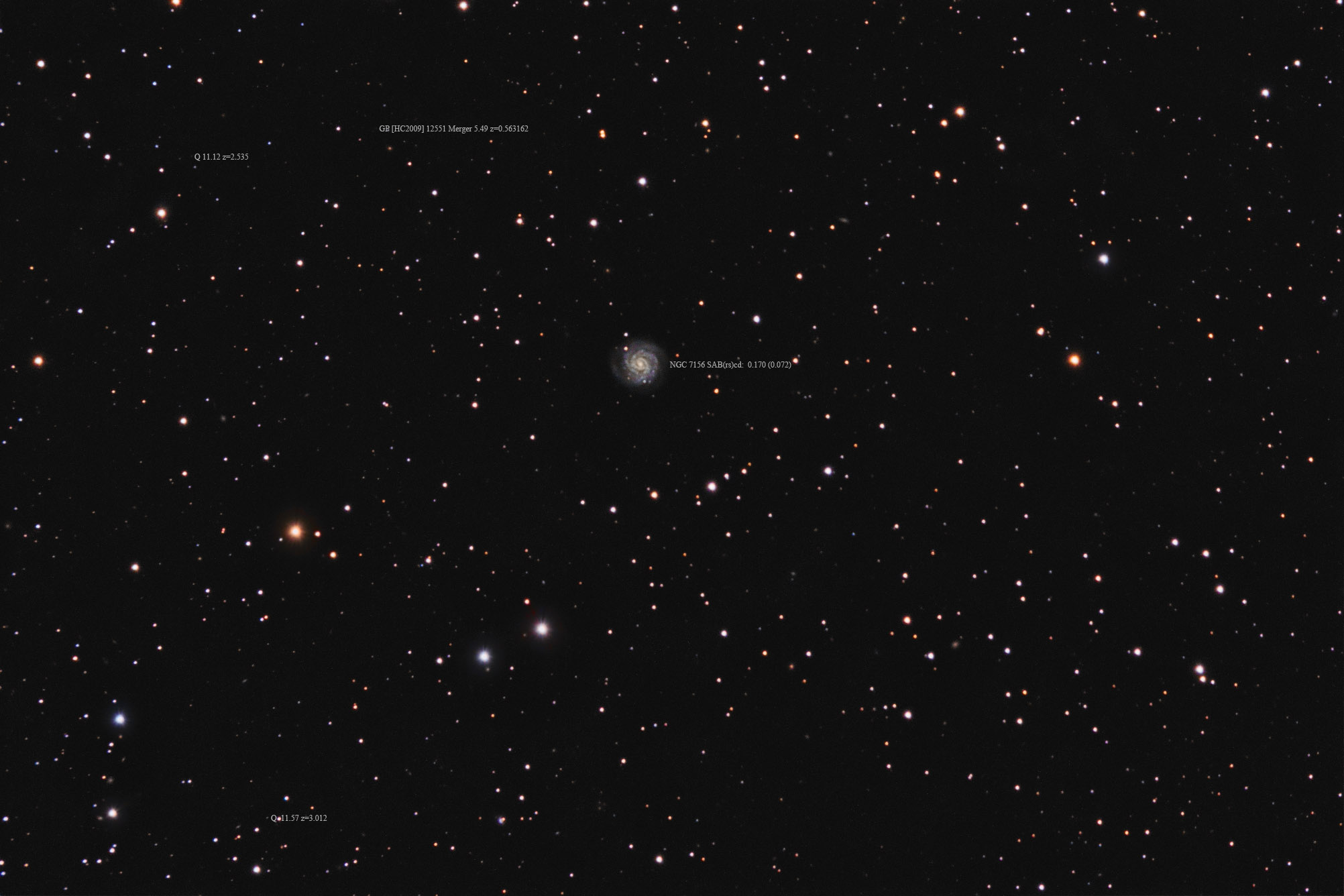