To its east is the strange galaxy UGC 12007. The CGCG describes it as a neutral patchy post-eruptive pear-shaped compact with a very extended halo plus jet (southwest) that lies southwest of a bright star. To me, it is a rather typical barred spiral but one with a very extended halo. It\'s possible the southwest arm is brighter than the northeast one though it could be an illusion due to the bright star. I certainly don\'t see it is pear-shaped. Its redshift distance is about 210 million light-years. It is likely related to NGC 7265. A past interaction may have caused its large halo and possible the featureless outer ring around NGC 7265.

The edge-on near the top looks like a small version of NGC 891 but with less blue. It is NGC 7264, an Sb spiral with a redshift of 180 million light-years. Still, it could be a member of the same group as NGC 7265, just one that is currently moving rapidly in our direction due to where it is in its orbit. It was found by Albert Marth on September 17, 1863. Much more distant NGC 7263 was also found by Marth but on September 9, 1863.

UGC 12013 near the bottom of the image left of center is classified simply as a spiral and at 230 million light-years is likely a member of the group. A bit more questionable is NGC 7263 to the northwest corner of my image. Its redshift distance of 270 million light-years puts it possibly a bit too far to be a member of the group. The CGCG says of it: \"Pair of red fuzzy elliptical with compact disc and neutral spherical compact (or star). Separation = 13 arcsec [south-east] - [north-west]. Spectrum: Absorption: Ca H and K (+ star).\" Several other sources consider it a pair of galaxies. Even my database in The Sky says both are NGC 7263. Still, NED lists only one object here and I agree. The PSF of the northwest object is virtually identical to a similarly bright star nearly due west of the object. No known galaxy in the image has a PSF identical to a star in the image. It is listed as S?.

NED shows one galaxy group, USGC U813 with 9 members at 220 million light-years. This has to be the group anchored by NGC 7265 though no diameter is given. Except for 2 LEDA galaxies redshift data isn\'t available for any of the other members of the group. Since the annotated image wasn\'t very dense with identifiable galaxies, all that NED did have identified are shown in the annotated image. Most with a ? for distance as it wasn\'t available. 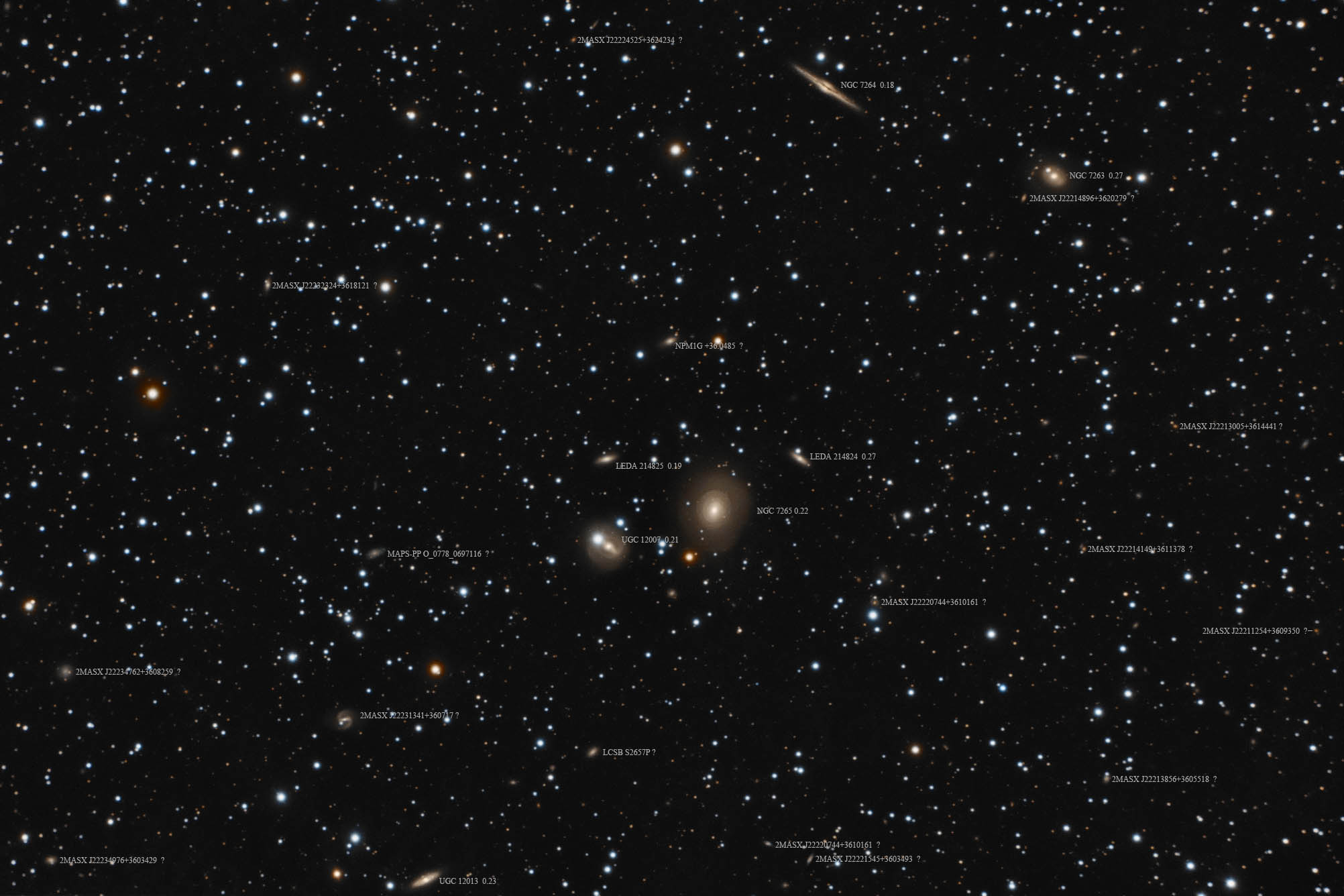 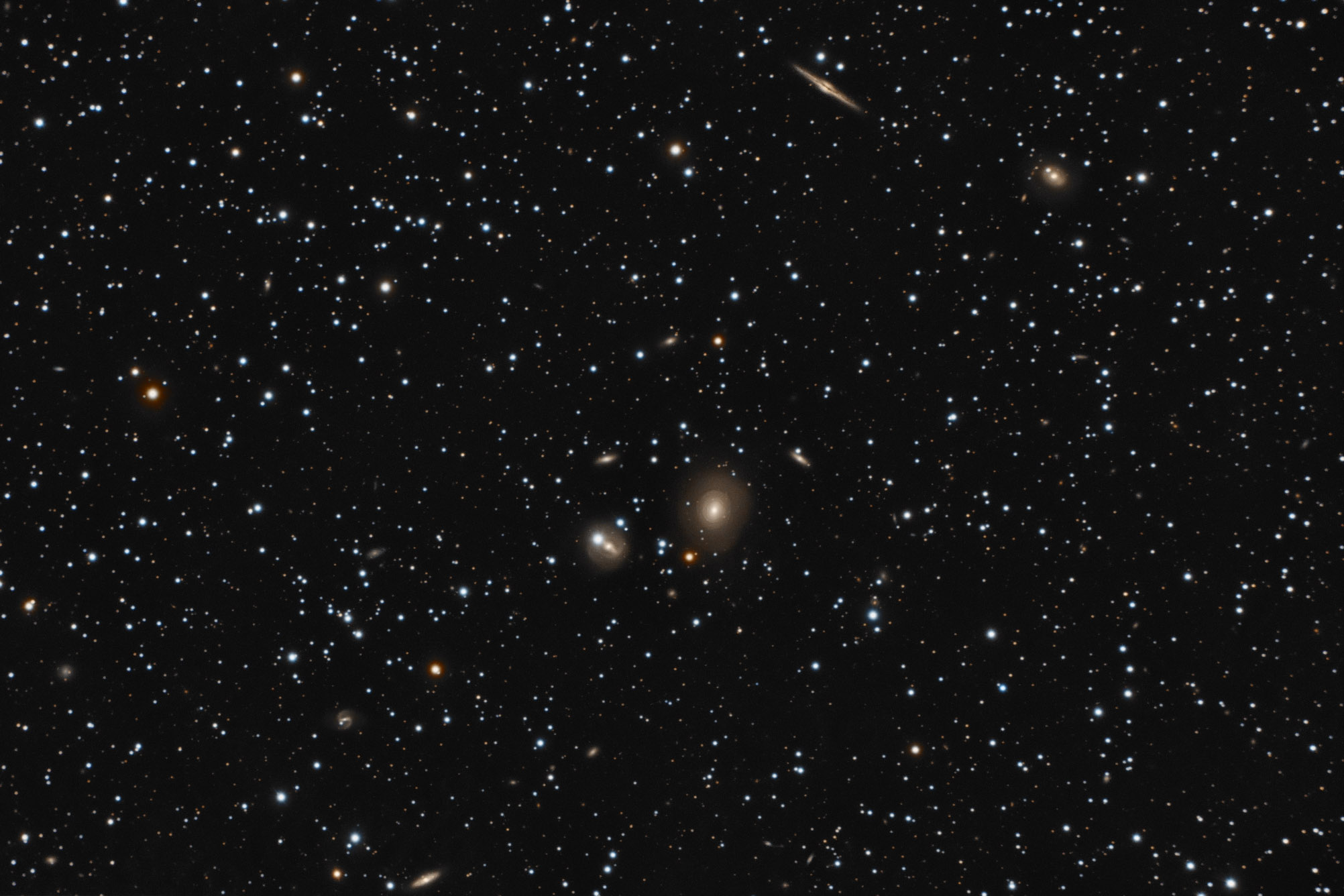 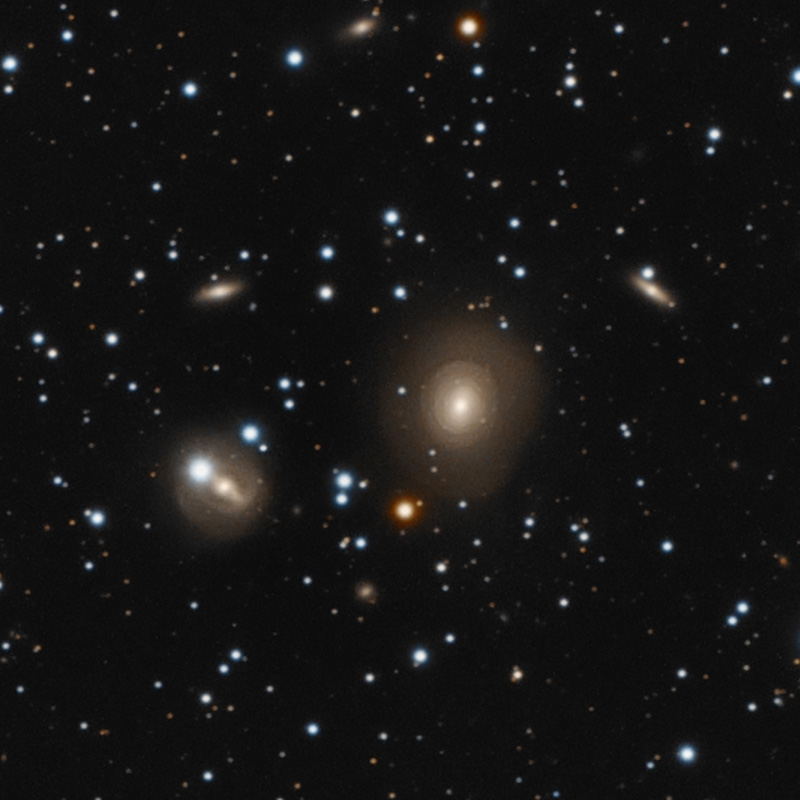