The WBL685 galaxy group is one name for some of these galaxies. Another is the USGC U820 galaxy group or the PPS2 004 galaxy group or the CGCG 514-081 galaxy group or the LDCE 1532 galaxy group or the B2 2236+35:[MLO2002] CLUSTER galaxy cluster. Problem is none seem to include all the galaxies. The last one as a galaxy cluster comes the closest but that name doesn\'t exactly roll off the tongue. So I\'m calling it the NGC 7342-NGC 7345 group as those are the two NGC galaxies in the field. This field is located in Pegasus a bit over a degree north of the far more well known NGC 7331 \"Dear Lick Galaxy\". In fact, the very top of my field is in Lacerta. Redshift puts the galaxies all about 330 to 400 million light-years distant. This may indicate there are two groups here or more likely just that their relative velocities about a common center of gravity are to blame with the true distance somewhat in the middle.

All the galaxies appear rather red indicating this group has likely interacted sufficiently to strip most of the star-forming dust and gas from them leaving even the spirals red and dead. NGC 7342 is a face on spiral that shows hints of some faint blue areas indicating star formation went on until a few billion years ago. NED classifies it as SBa and 350 million light-years distant. The NGC Project agrees though Seligman adds a question mark.

The other NGC galaxy NGC 7345 has a redshift that puts it most distant at 410 million light-years but one source disagrees and says 340 million light-years. NED and the NGC Project classify this edge on spiral as Sa while Seligman again adds a question mark. This galaxy was also found by Édouard Stephan apparently the same time as NGC 7342. Both galaxies were discovered by Édouard Stephan on September 11, 1872.

For determining sizes to these galaxies I\'m going to assume all are at 350 million light-years about a median value for the galaxies in this image with redshift data. Using that NGC 7342 and NGC 7345 are giant spirals at 140,000 light-years. NGC 7345 is even larger if its larger redshift is accurate which I doubt. Assuming all these galaxies are at about the same distance their relative sizes is obvious from the image so I won\'t compute sizes for the rest.

Of the other galaxies, UGC 12127 and MCG+06-49-060 seem to share a common faint halo. While they look like normal elliptical or spherical galaxies the common halo indicates they are pulling stars from each other. Thus the common halo that appears to surround both is some 270,000 light-years across. Thus this is the largest system in the group. What details I found are listed in the annotated image.

Shortly before I took this image I had the camera off the scope to clean a nasty dust mot from the L filter that was so large it wouldn\'t flat out. In putting the camera back on I managed to screw up and leave a light leak that put a very steep and strong gradient across the image with a sharp shadow at one edge. Due to the sharp edge, even Gradient eXterminator couldn\'t fully handle it. Since this was too far west by the time I found the problem I spent many hours trying to recreate the light leak and make a flat to compensate. I finally managed to do so. Then I fixed the light leak. It only happened with a particular orientation of the scope where the blue LED of the Paramount hit the camera just right. Why Software Bisque put a bright blue light on the mount (seen only when using USB port as it is inside and covered by a panel if the serial port is used) I can\'t fathom. I had duct tape over it but apparently, that came off so it was a combination of errors that created the issue. BTW I found a good use of a cloudy sky. By pointing the scope where this field was when taken on a cloudy night I was able to make a flat that reproduced the gradient. I had to hit the times exactly the same. Fortunately, the pointing accuracy of the mount is within about 10 seconds of arc so by setting the date and time to match and overriding all the screams of The Sky that I shouldn\'t do that was I able to make the needed flat to compensate. Finally, a useful series of images was taken on a cloudy night! What I won\'t do to save an image. 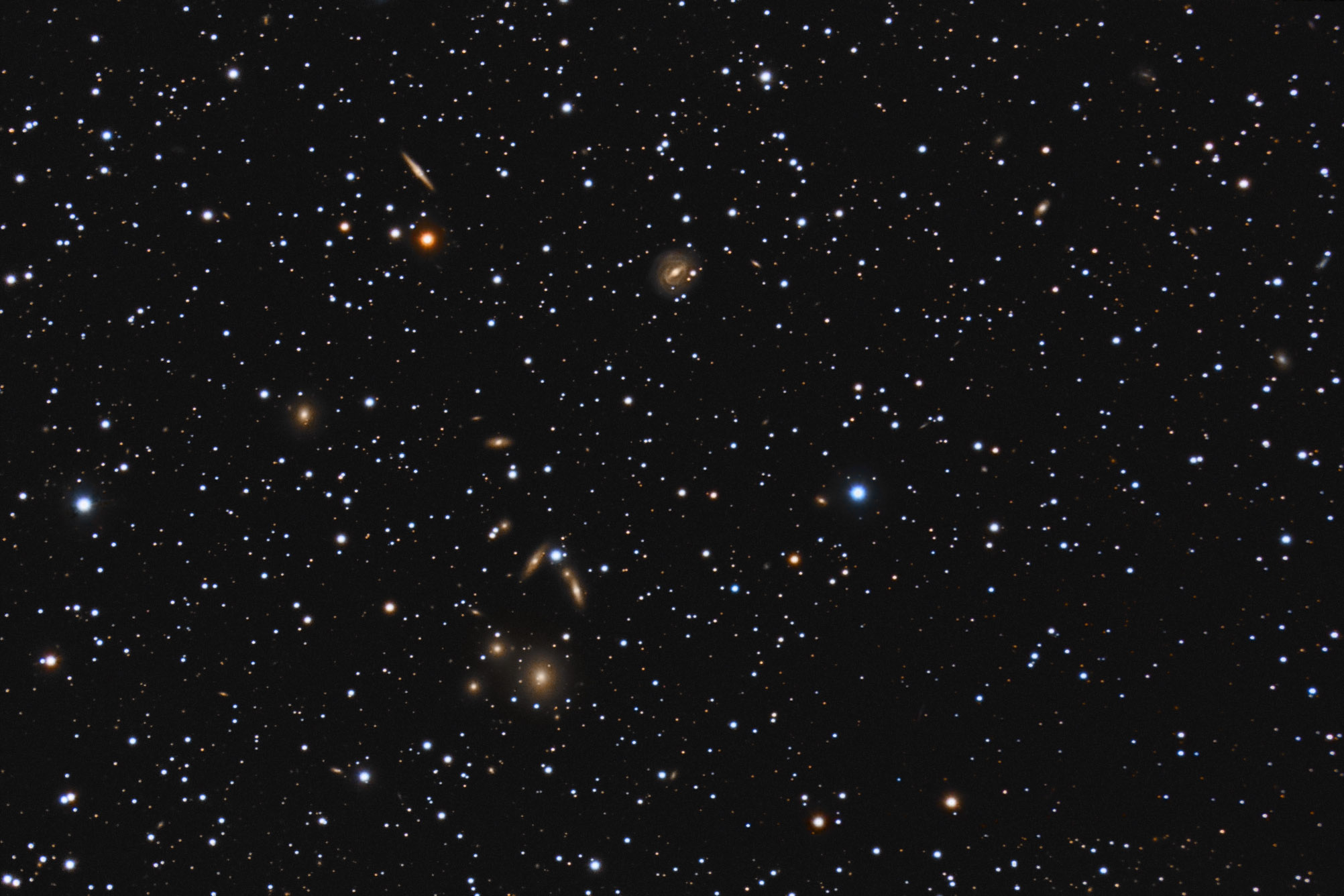 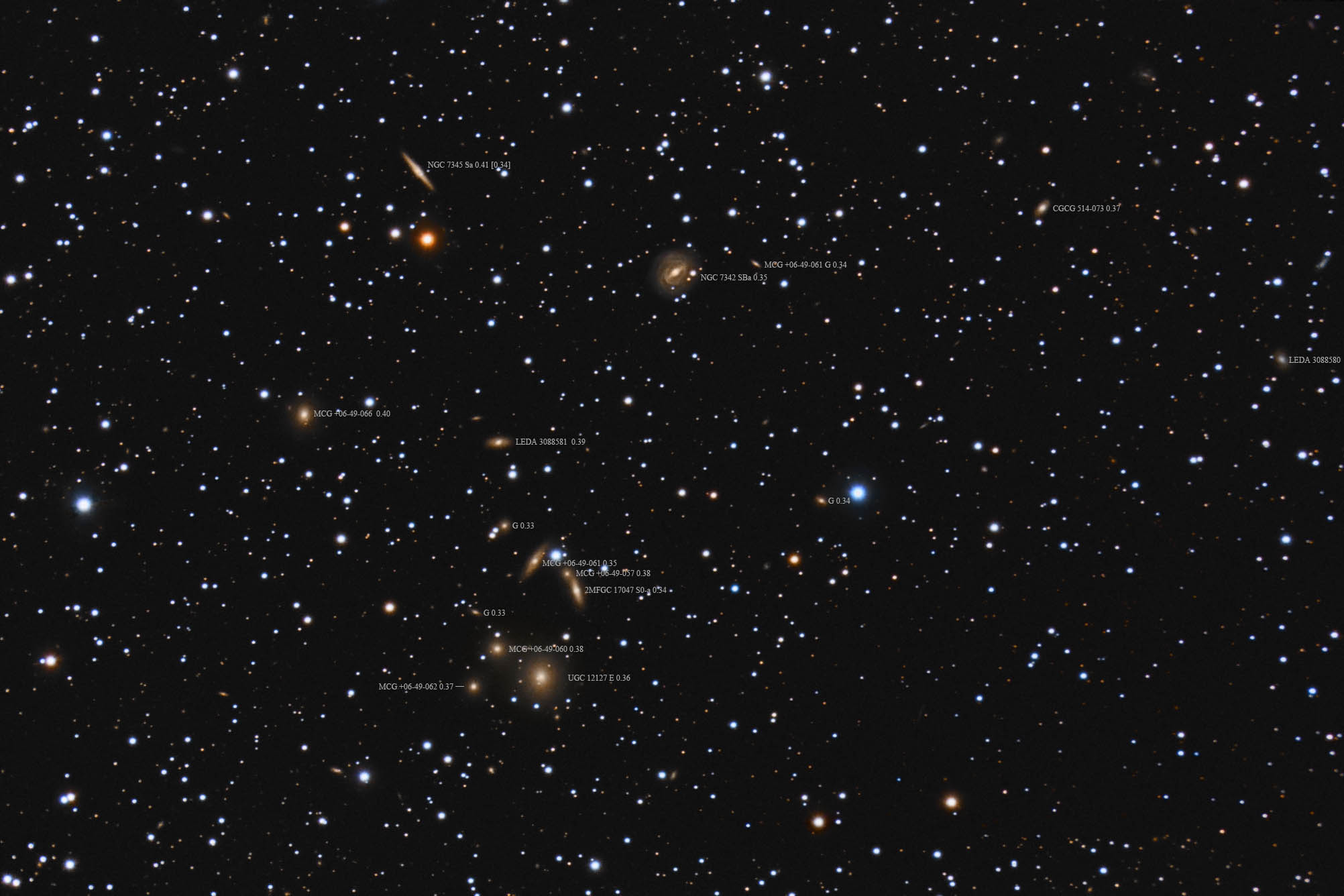