NGC 7497 is a galaxy about 60 million light years distant set in the Integrated Flux Nebula in Pegasus. The IFN, also known as Galactic Cirrus is dust far out of the plane of our galaxy caused to fluoresce by the ultraviolet light of super hot stars in our galaxy\'s disk. The galaxy, of course lies some 60 million light years beyond our galaxy and its IFN. It is classed by the NGC project as an Sc galaxy, as an SB(s)c galaxy by de Vaucoulers and as SB(s)d by NED. I\'m not seeing it as a barred spiral though it appears I\'m out voted.

The bright blue piece of IFN at the far upper left below a very bright star seems bright enough to have made it into a catalog but Simbad has nothing at that position.

There is little on this field. The blue oval smudge of a galaxy southeast of NGC 7497 is NPM1G +17.0731. The blue smudge west southwest of NGC 7497 is MCG +03-59-001/PGC 070552. The bright blue spiral northeast of NGC 7497 is another bright but anonymous galaxy in NED. I keep running into these. Seems no one it catalogs has found it interesting enough to even list as an anonymous galaxy. It\'s bottom half seems cut off. Look closely and you see a faint arm down in the \"cut off\" region. Is it obscured by unlit galactic dust? What is going on here?

Only 4 other galaxies in my image are listed in NED. All small and insignificant, at least from my point of view. I see no difference in them than many others not listed. All 4 are from the 2 micron survey so interesting as bright at that wavelength as likely star factories.

This image was taken over two nights. An asteroid from each night shows in the image. The one from the first night, (247103) 2000 SL317 is NE of NGC 7497, two thirds of the way to the anonymous blue spiral and is moving only in R.A. It was just out of the frame to the west the second night. The other asteroid, 2010 JH161, is about 3.6 minutes west (right) of the core of NGC 7497 and moving down at to the right at a 45 degree angle. It\'s trail starts near a slightly orange star. It was out of frame to the upper left the first night Comparing the two trails you can tell seeing was a bit better the second night. Both are about 19.5 magnitude. Due to the IFN both are very difficult to pick out. Edit: this was taken before I was annotating images with asteroids. Don\'t spend time looking for these \"Where\'s Waldo?\" asteroids.

A blue star at the bottom of the image and a red one at the top hit right on the edge of the chip. When I moved either way to avoid this something put a horrid set of reflections into the image. Only solution was to leave these stars right on the edge where they glared into the image. I could have cloned them out but the blue one was in the IFN and impossible to clone out without distorting the IFN so I decided to leave both in. I did tone them down significantly. Yes they were far worse! I discovered the reflection issue a year after I\'d taken it and was just now putting it together. No way to remove it as it hit in the IFN. So I completely redid the image September 3 and 5 of this year. Finally I\'m posting a current image. 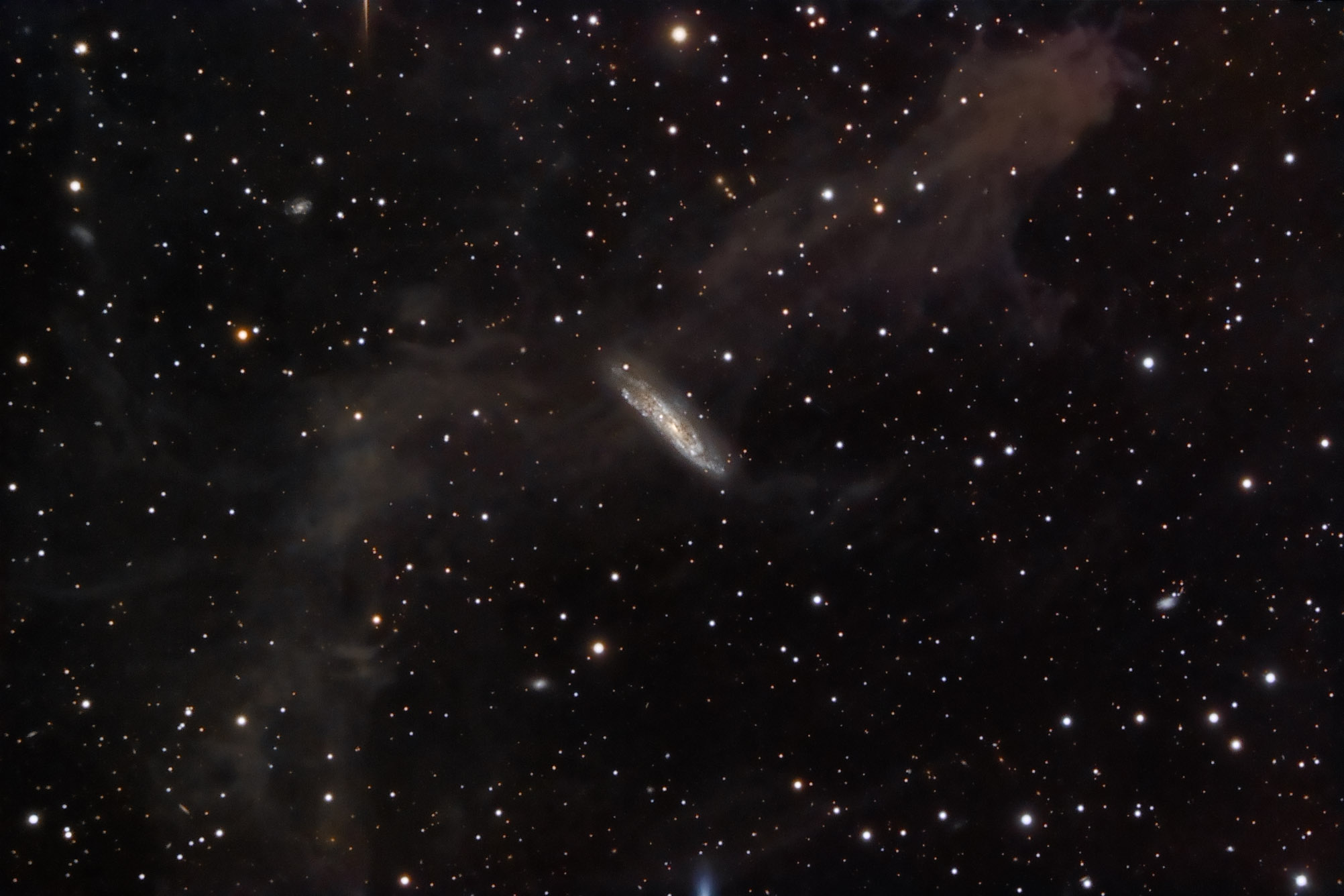 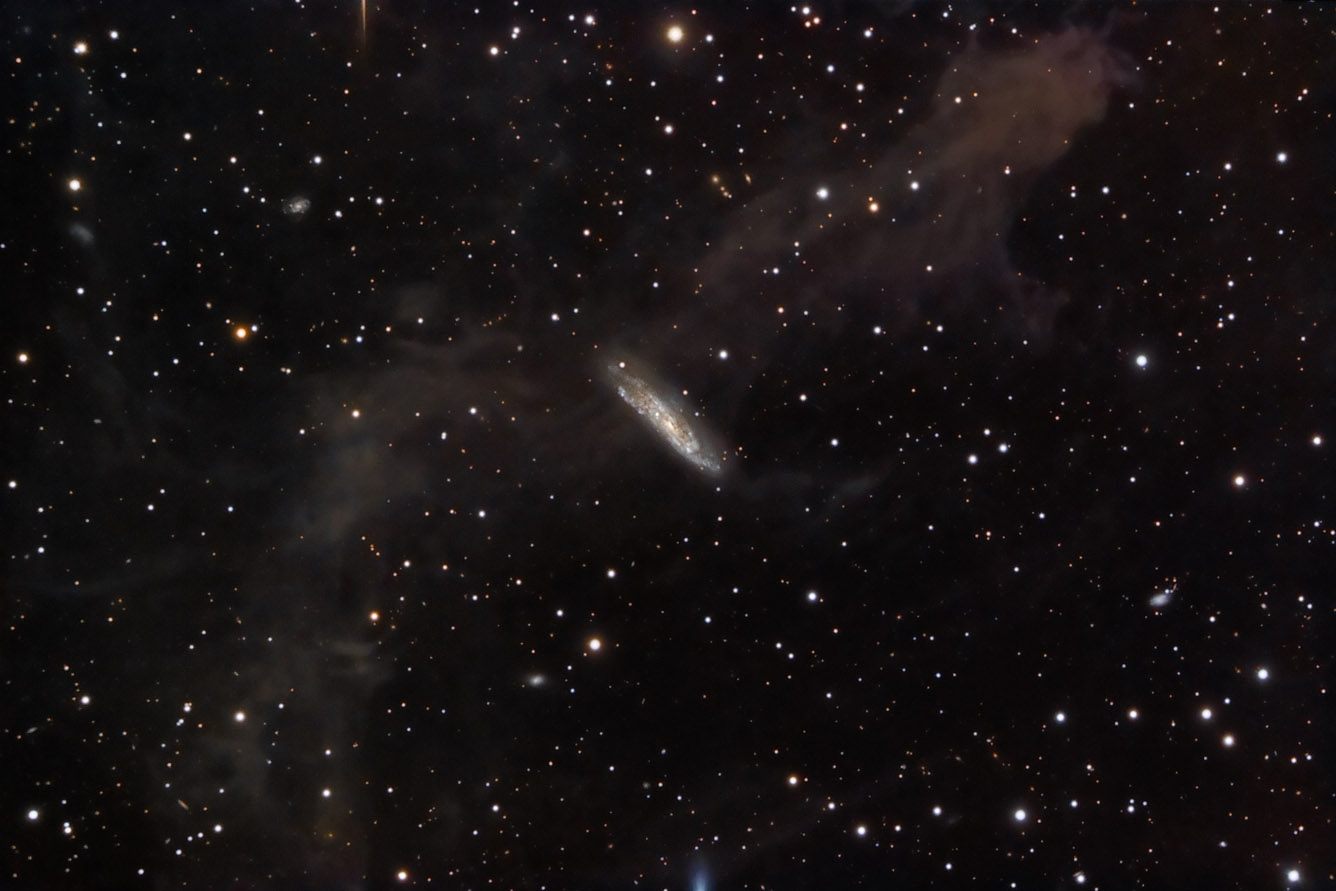