The identity of NGC 7559 has a minor problem. Seems it has a companion seen against its halo to the north that has a similar redshift so they really are related. But how these two are cataloged varies quite a bit. NED considers NGC 7559 to be a double galaxy though I doubt Herschel saw the companion. NED considers the small northern one NGC 7559A and the main one NGC 7559B. Other catalogs call the main galaxy NGC 7559 and the companion NGC 7559B. Others give the main galaxy both the NGC 7559 and 7559A name. Seligman says of this \"... providing another example of why such non-standard designations should never be used.\" He prefers calling the companion PGC 070852 and eliminating the A or B designations entirely.

Just below NGC 7559 half off my frame is ASK 143856.0 another double galaxy but I cut off its companion, unfortunately. Seen at my resolution it would look a bit like a U if I\'d have caught it all.

For several years now I\'ve been plagued with lower transparency than I had originally. While not back to normal, the night of this image, July 27, 2017 I had much better transparency than I\'d had in some time. Still a magnitude short of what I used to do but it was reaching 23rd magnitude. This allowed me to pick up several galaxies that appear to be part of a group at 5.86 billion light-years that were just at the 23rd magnitude limit. One was even more distant at 6.14 billion light-years. Sure was nice to get improved transparency after all these years. But it didn\'t last. Soon smoke from fires in first British Columbia then added smoke from the Oregon and Washington fires hit first limiting transparency and then shutting me down totally when even seeing a 1st magnitude star was impossible.

The annotated image shows a faint, tiny, smudge of a galaxy identified as SDSS J231542.74+132957.0. NED shows it with a small blue shift (negative z value). This seems very questionable. NED classifies it as a galaxy but that small and faint it is most likely very distant. While not absolutely impossible I suspect this is likely the work of the infamous Asian astronomer Sum Ting Wong.

I\'ve annotated all galaxies NED listed in the frame with redshift values. I do find it a bit surprising that no verified quasars were in the frame. A few candidates that NED indicated were likely not quasars were listed but not annotated. I\'ve found over the years those with only photographic red-shift, as was the case with these, and for which NED first listed them as stars that have been further researched turned out to be rejected quasars. Therefore I didn\'t annotate them. I do annotate others that NED had a spectroscopic red-shift for. However, none were in this image so it annotates only galaxies and galaxy clusters. Only two clusters that may be really one were in the image, along the western border.
Normally I\'d now include the z value for these distant galaxies but with so many, I didn\'t take the time and was afraid it would clutter up things even more. As usual, galaxies with only coordinates for a name are just labeled with a G for brevity and a cleaner image.

After a couple nights of good seeing, things reverted to the poor seeing I\'ve had most nights the last few years. At least the better transparency remained. 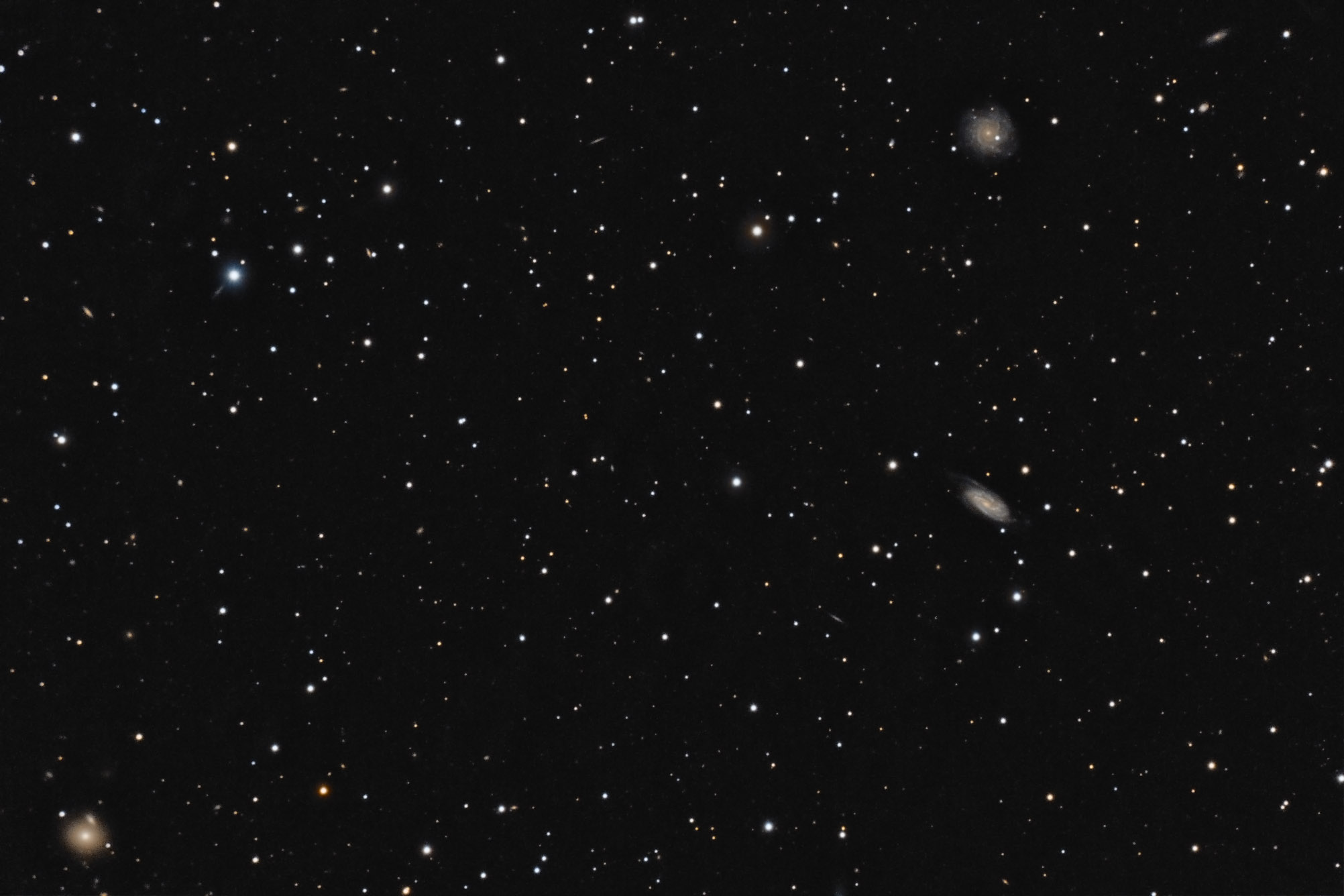 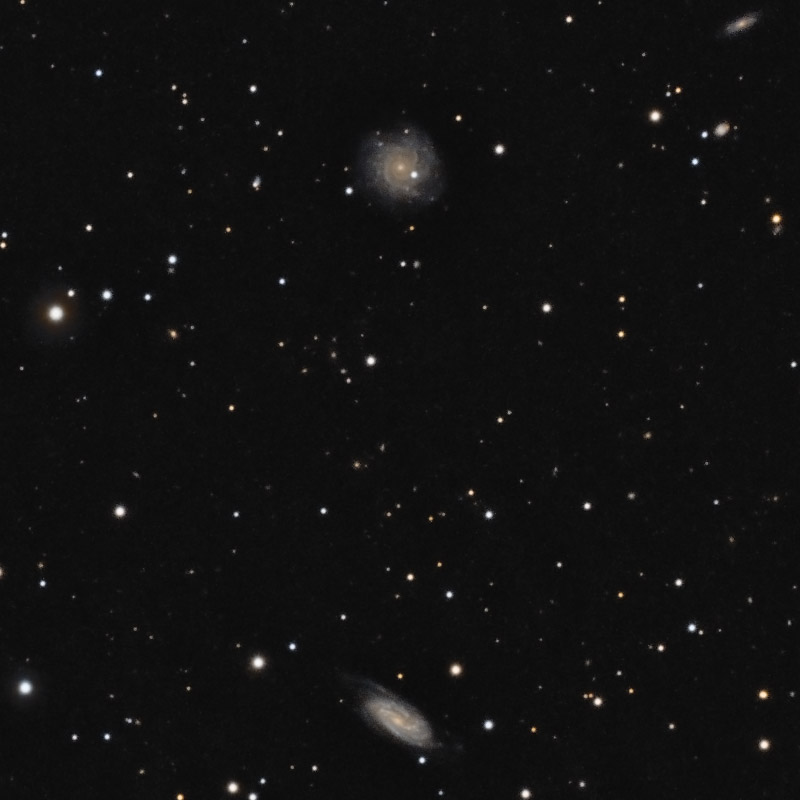 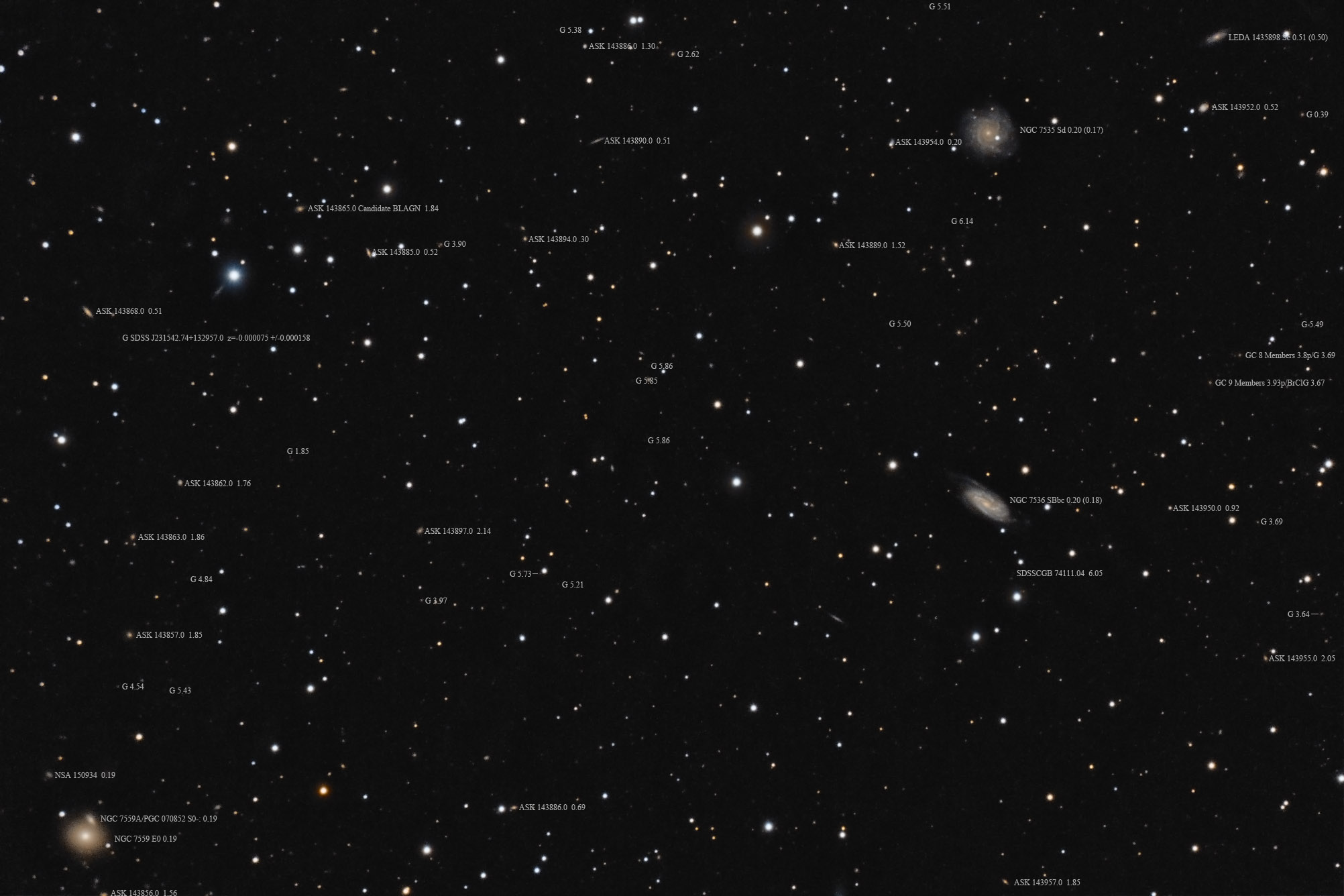