NGC 7541 is a peculiar spiral galaxy in western Pisces about 110 million light-years distant. It is classified as SB(rs)bc: pec HII though I don\'t see any HII in my image it likely is in the very odd blue streak which is likely due to very new stars. Notes at NED say it is a disturbed starburst spiral. While it is classified as a barred spiral several say they see no evidence of a bar. The NGC project agrees classifying it as Sc while Seligman says SBc?. So does it or doesn\'t it have a bar? I see none in any photo (not many) I found of this galaxy. Even the HST image at Seligman\'s site https://upload.wikimedia.org/wikipedia/commons/c/cc/NGC_7541_HST_10769_814.png shows no sign of a bar that I can see. Maybe it shows only at radio frequencies. Assuming the 110 million light-year distance it is about 100,000 light-years across, similar to our galaxy.

In 1998 SN 1998dh blew just above the end of the blue streak. It resulted in a distance measurement of 108 million light-years when adjusted for the current Hubble Constant value. That agrees very well with the redshift distance. I rounded both to 110 million for the annotated image.

The galaxy was discovered by William Herschel on August 30, 1785 and is in the second Herschel 400 observing program. I\'ve not tried for it visually as yet. To add to the confusion on January 11, 1875 Horace Tuttle reported a galaxy in the area. There\'s nothing at his coordinates. Dreyer included it in the NGC as NGC 7581. The NGC Project and Seligman both consider it likely it is a duplication of NGC 7541. NED says the identification of NGC 7581 and NGC 7541 is doubtful but if you ask NED about NGC 7581 it returns NGC 7541. My version of The Sky also shows these two as the same object.

A couple minutes south southwest of NGC 7541 is NGC 7537. It has almost the same redshift as NGC 7541 so is likely a companion. I can\'t say I see any interaction. NED classifies it as SAbc: HII. Again I don\'t see the HII. Seligman agrees with NED saying it is Sbc? which is equivalent to NED\'s classification. NGC Project however says simply Sb with no question mark or colon. I measure it at about 70,000 light-years in size. If the two are the same distance from us then they are a bit under 100,000 light-years apart. This distance would cause distortion unless the are just now approaching each other and doing so rapidly with transverse motion so it wouldn\'t alter the redshift value. I think it more likely they are further apart than redshift indicates. Non redshift measurements put NGC 7537 at about 120 million light-years so close but not close enough to interact. Being the smaller I\'d expect it to show interaction before NGC 7541 so it likely isn\'t the cause of the blue streak in NGC 7541. NGC 7537 was also discovered by William Herschel the same August night he found NGC 7541 but is too faint to make either of the observing programs.

NED has little on the rest of the field. In fact two rather obvious galaxies aren\'t in NED, Simbad or my The Sky databases so are marked with a question mark. A couple very faint and distant quasars did have redshift. You will likely have to look very closely to find them just to the right of the labels. A couple galaxies in the extended PGC are in The Sky\'s Database and are labeled in the annotated image but without any distance information. 2MASX J23144719+0438240 is labeled at NED as the upper part of a double blob. Is this one or two galaxies. NED\'s coordinates center on the brighter blob. To me it appears to be two very blue galaxies but it could be one strange irregular galaxy I suppose. With nothing more it will remain a mystery which it is.

At the very top of the image is a strange comet like galaxy not found in any catalog I checked. It appears to have a double head and a broad tail continuing the comet analogy. I\'d love to know more about it but apparently that\'s not to be. The other unidentified blue galaxy also appears double with the left side larger and brighter than the right. It could be a sloshed galaxy with a bright star cloud or just a strange irregular galaxy. Again there\'s nothing to go on here.

This field was taken as I hoped to learn something about the odd blue streak in NGC 7541. I found nothing on it other than it is likely a starburst region in the galaxy. Otherwise the field only brought up more questions and answered none. 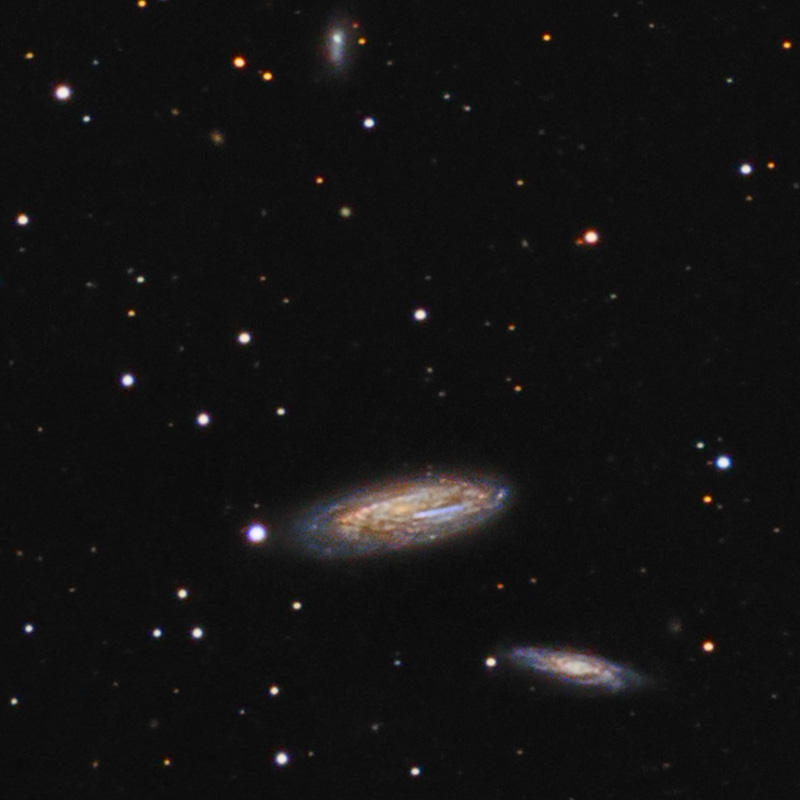 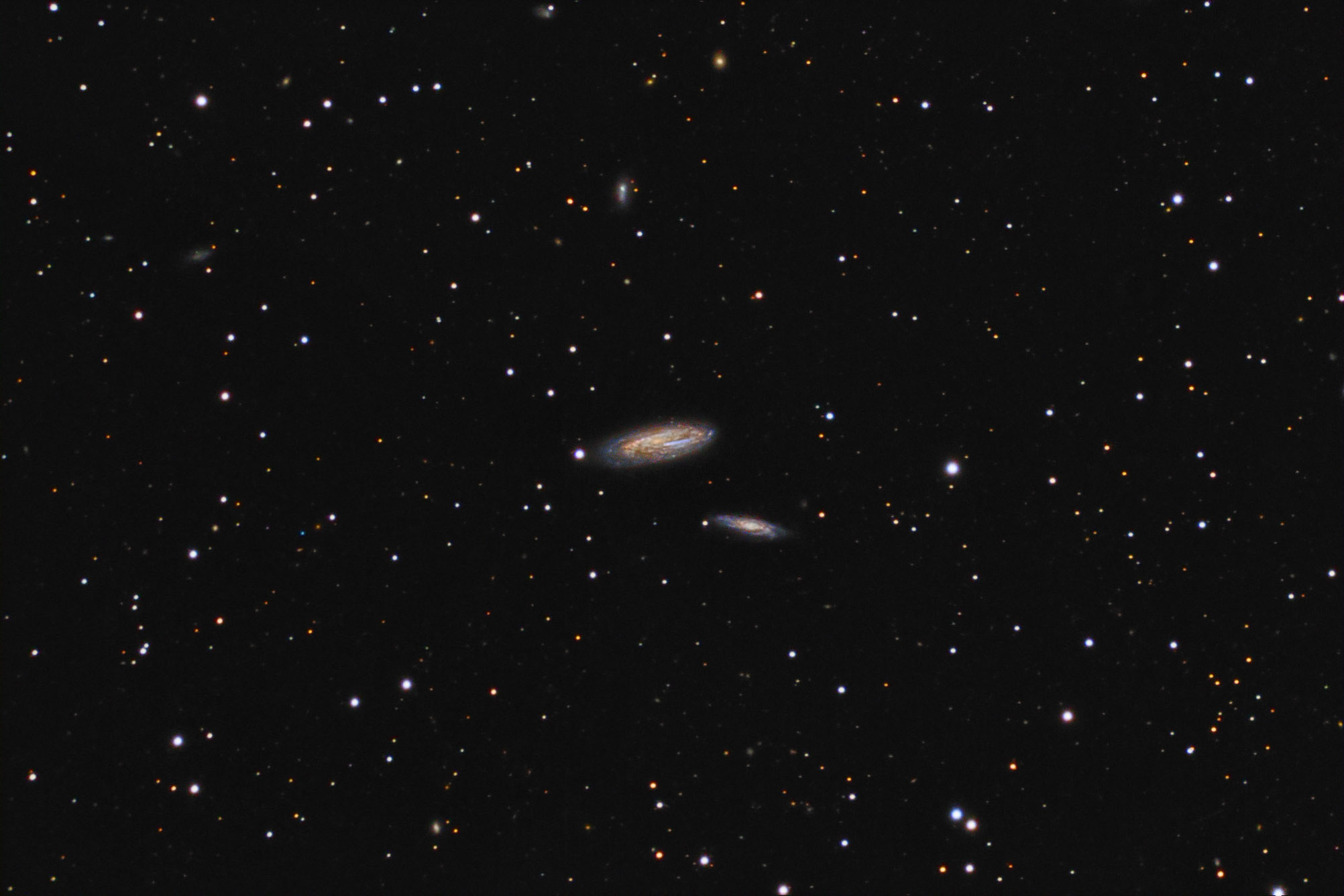 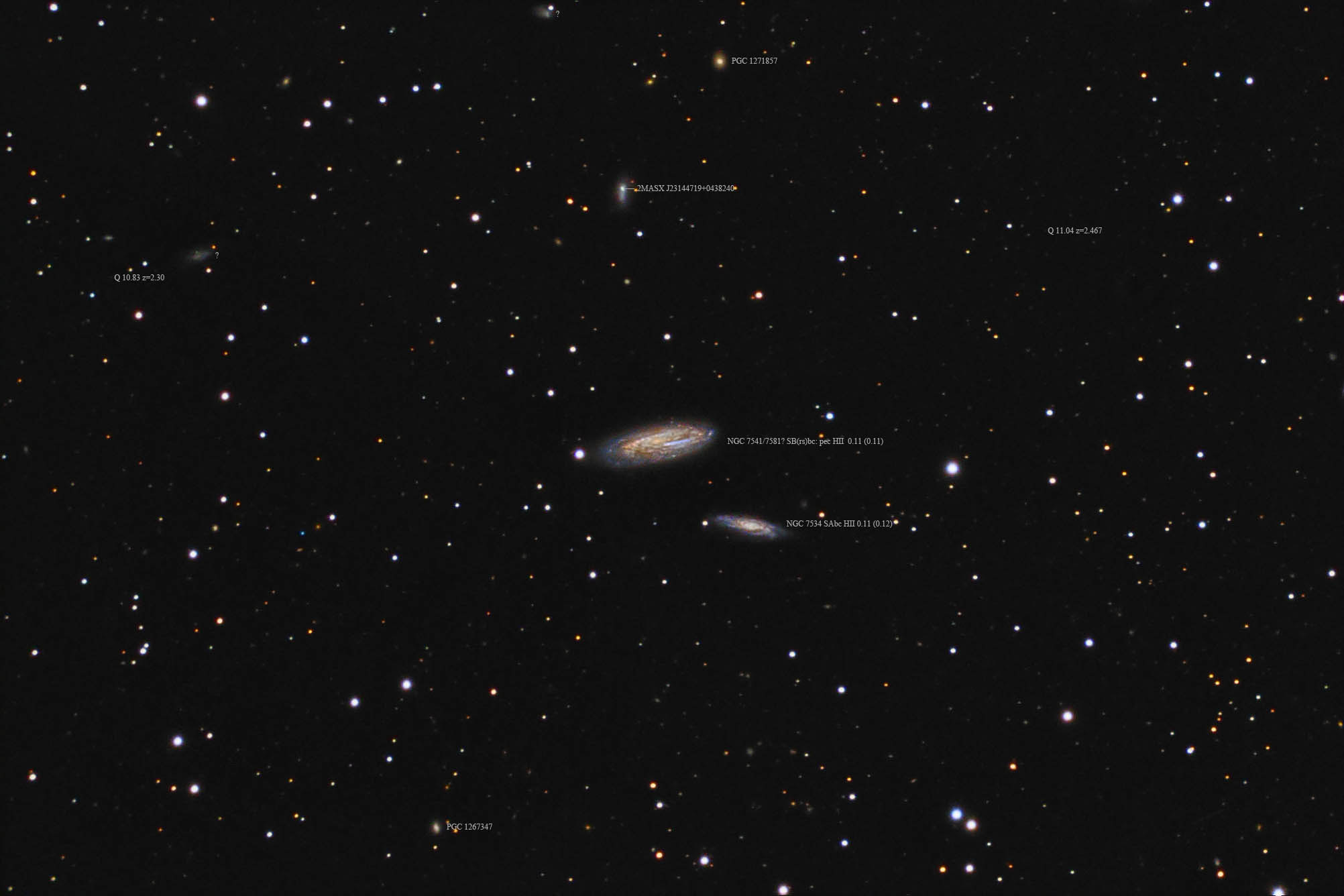