NGC 7569 is a rather strange galaxy in southern Pegasus under the Great Square. Red shift puts it some 280 million light-years distant. NED classifies it as S0?. No peculiar label but it sure merits one to my eye. The NGC Project and Seligman both agree with me and add the peculiar label but only Seligman adds the question mark and uses a lower case \"o\" which is likely a misprint for a zero. It was discovered by Lewis Swift on September 6, 1886. The CGPG says of it: \"Compact patches and jets.\" I can\'t say I see the patches but what it calls jets, I\'d call plumes. That entry was from 1973 which could explain it the \"jet\" term. A 1971 entry in the CGCG says \"Post-eruptive blue disrupted irregular galaxy with compact patches and jets.\"

I\'d say this guy is most likely due to a merger. I tried to look it up at Simbad to see if they had more but their database was messed up and said NGC 7569 was not the name it recognized. Entering coordinates returned its UGC number 12472 and said there were 15 references but when I tried to access them it said they didn\'t exist. I reported it. Just before sending this they did fix the problem and now there are 17 references but none say anything about the history of the galaxy or the \"jets\" but for the two mentions above.

Only three other galaxies have redshift value. Two appear related at 340 million light-years. The one with the unusual designation of [OBC97] P04-4 is listed at two positions in The Sky\'s database under two different PGC numbers neither of which are recognized by either SIMBAD or NED. OBC stands for O\'Neil+Bothun+Cornell galaxy catalog of 1997 in case you were wondering. Why neither NED nor Simbad list any other galaxy catalog for it I don\'t know.

By now you know I like flat galaxies. To better pick up the flat galaxy 2MFGC 17454 I moved NGC 7569 to the east. Note that the ansae of this flat galaxy are quite warped with the northwest end bent up and the southeast end bent slightly down. My resolution isn\'t sufficient to tell if this is due to wrapping of spiral arms or a real warp. I believe a real warp is likely involved and the nearby spherical galaxy may be the cause however it has no redshift data so I can\'t tell if they are possibly related or not. 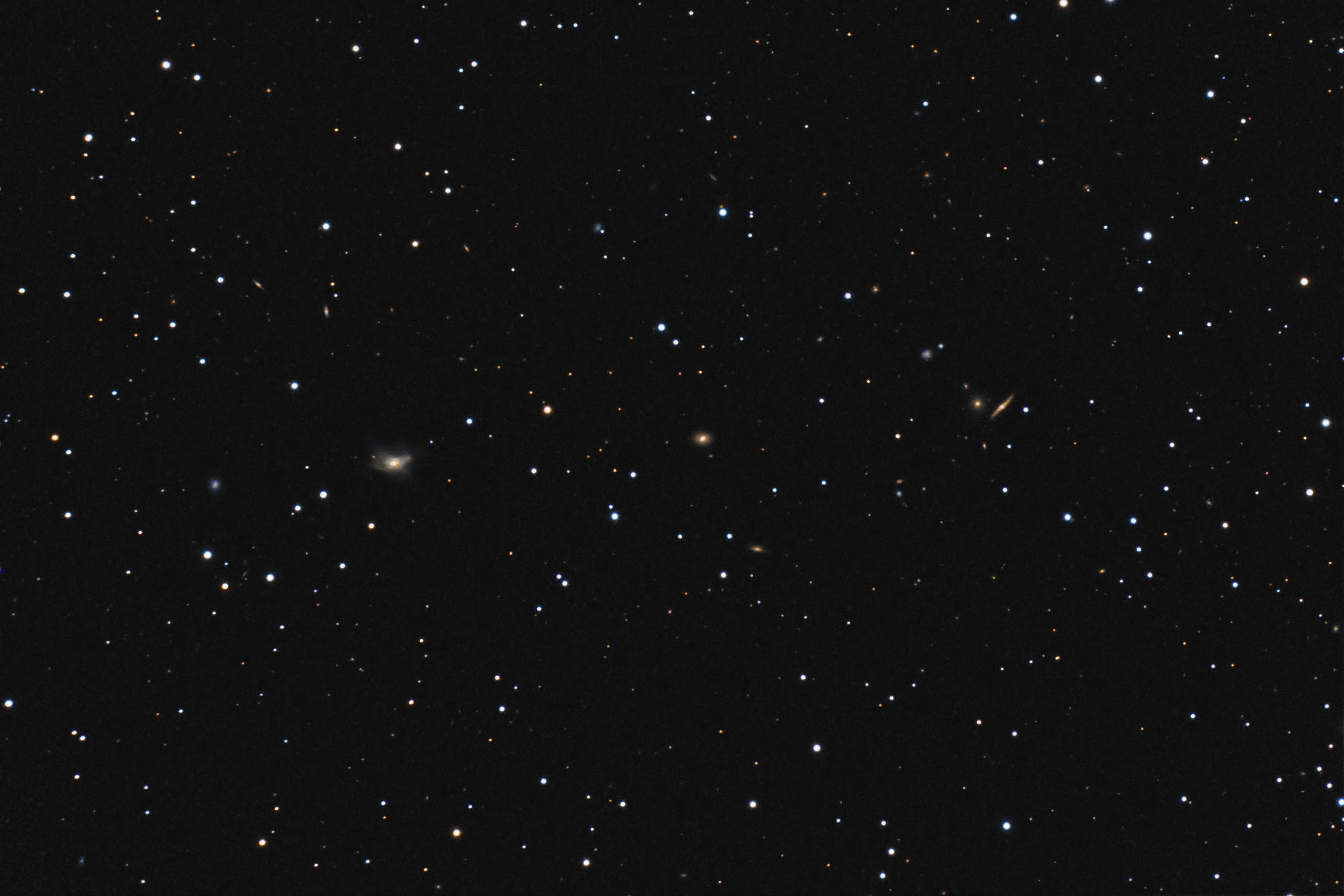 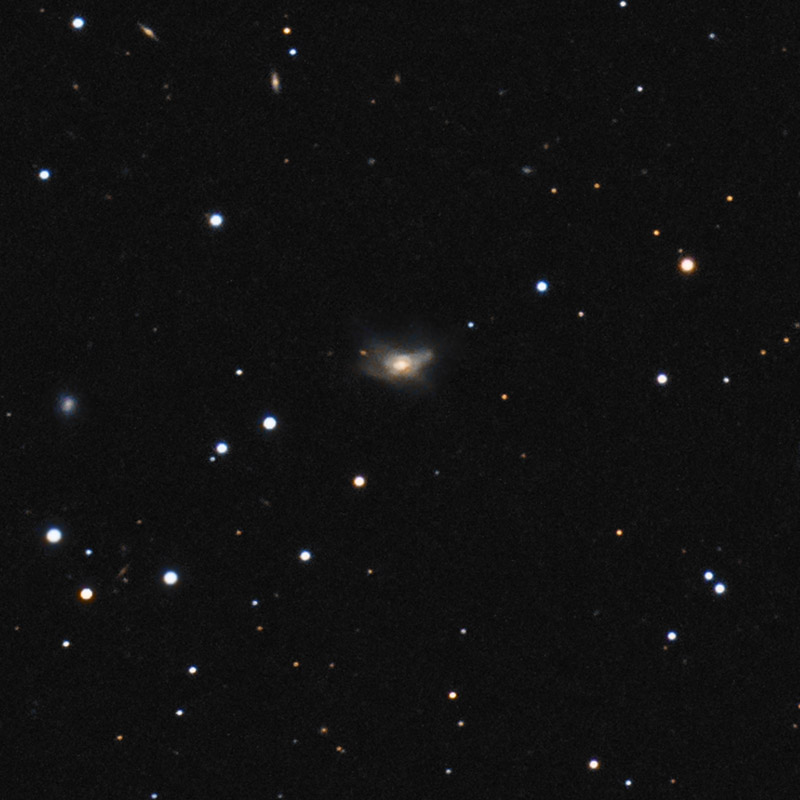 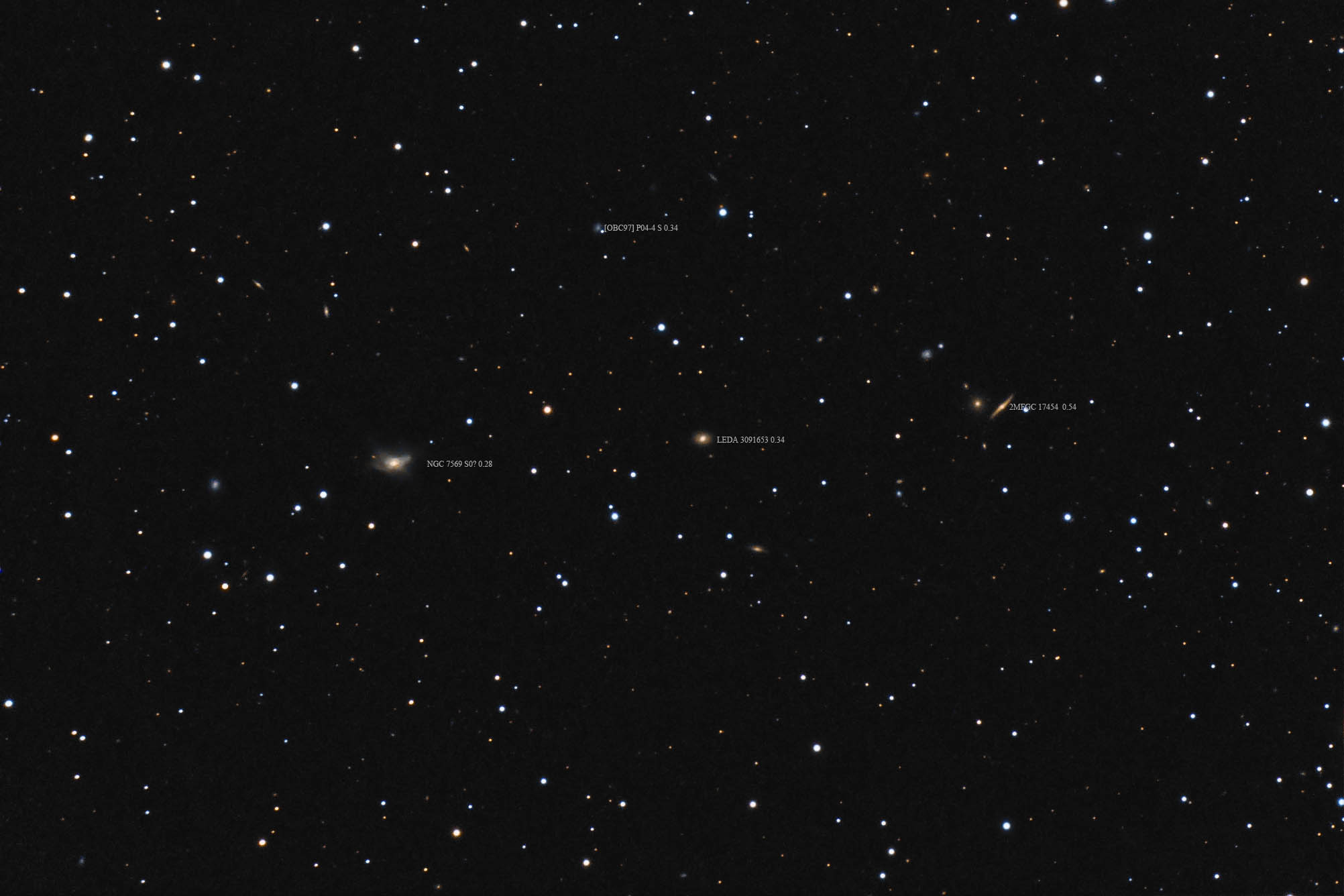