NGC 7638/1483 appears to be a very disrupted spiral galaxy in Pegasus about 350 million light-years distant. It was discovered by Andrew Ainslie Common on August 8, 1880. Unfortunately Common gave no coordinates for this one or NGC 7639 he found the same night. Just a rough estimate of distance and direction from NGC 7630 (out of my frame) Dreyer entered these into the NGC with approximate coordinates. Later Stephane Javelle, on December 2, 1893 found both of these with good coordinates so we know these are what Javelle saw. Not realizing they may be what Common recorded they got a separate listing the IC catalog. Since nothing else is in the area Common would have seen in his scope it is assumed he saw these as well. Since his observations came first to Dreyer\'s attention they went into the NGC and Javelle\'s more accurate observations went to the IC without anyone catching on at the time they were likely the same two galaxies. But this is still debated, hence the question marks after their designation in the annotated image.

NED lists two galaxies at NGC 7638\'s position with their coordinates only a few pixels different in my image. The position for 7638 is the optical center where there\'s no obvious object while the NED01 position is centered on the brightest point in the galaxy. I see no second galaxy even in the Sloan image. The second is listed as NGC 7638 NED01/IC 1483 NED01 and has the same .6 minute diameter. But it has no magnitude estimate to compare to that of NGC 7638. NGC 7638 carries the PGC 071242 label while the NED01 galaxy is AGC 330294. Neither the PGC nor AGC have a second galaxy listed. While it is tempting to say this is two overlapping interacting galaxies I can\'t see anything in any image I found of it to support this.

NGC 7639/IC 1485 is a pretty normal E/S0 galaxy at the same distance as NGC 7638. Between them in my image is KUG 2320+110C a spiral at nearly the same redshift so likely a member of their group. Nearby is the double galaxy KUG 2320-110B. Its angular size is smaller than the others. With no redshift, I can\'t tell if that means it is more distant or just two overlapping and possibly interacting small members of the same group. With nothing else having redshift data the annotated image is pretty sparse of data. 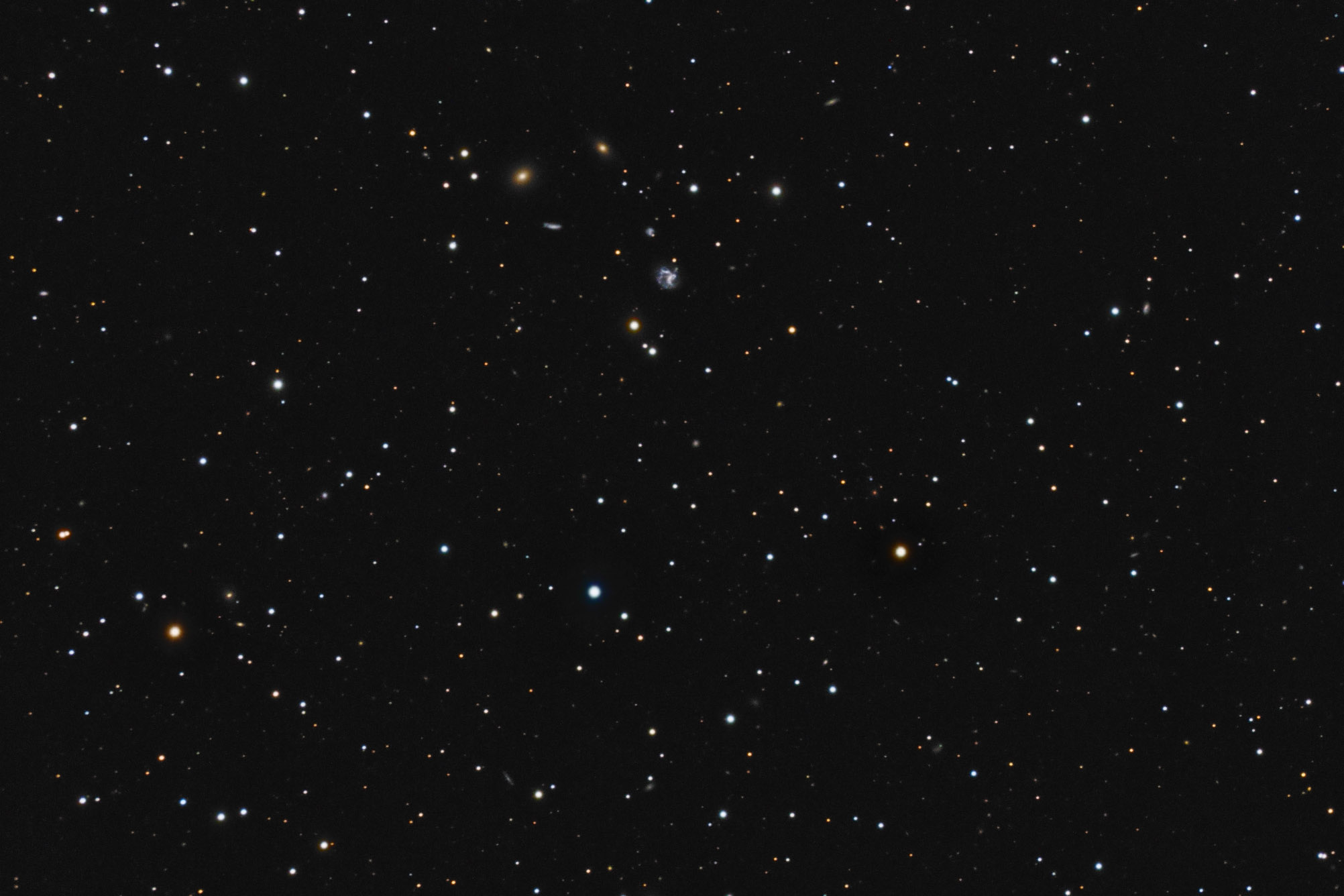 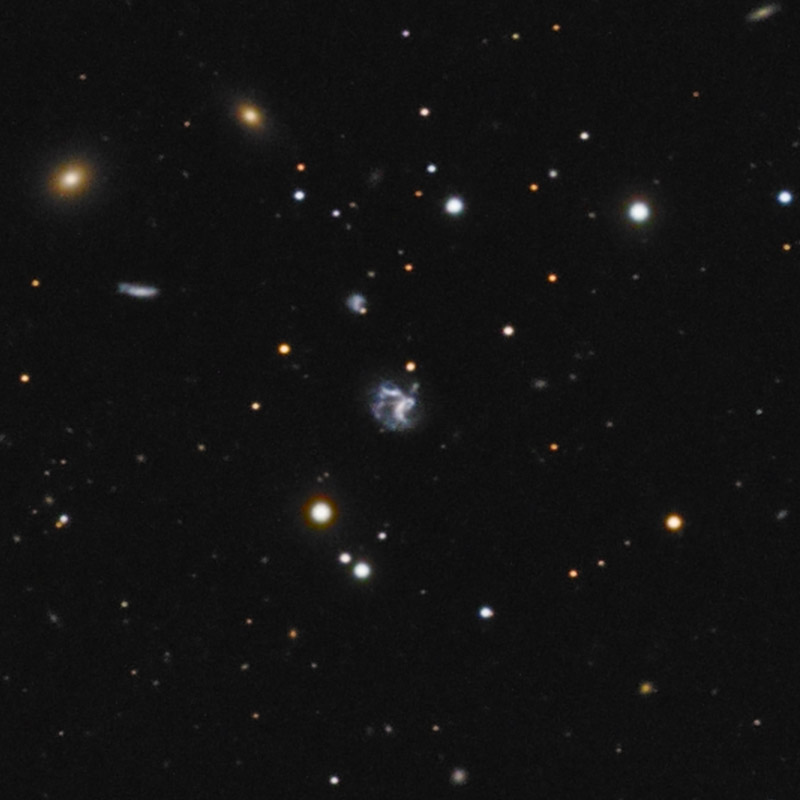 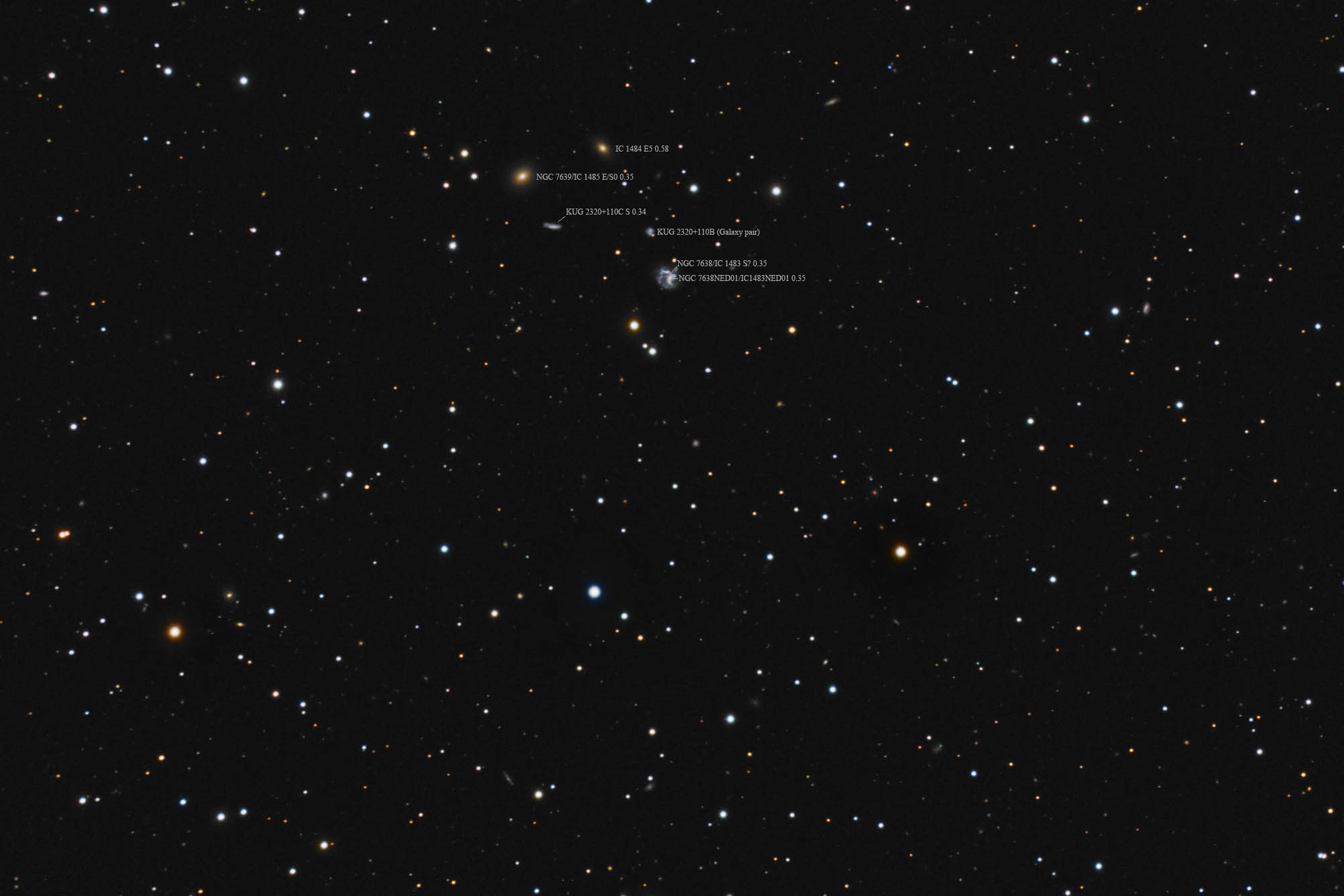