NGC 7673 is a very disturbed galaxy in the great square of Pegasus about 140 million light-years away by redshift. It is classified by NED as (R\')SAc? pec; HII with a starburst core. Whew. The NGC project says simply Sc/P while Seligman says Sc? pec. It has a very large blue halo with a detached part well to the west as if part of a shell. A note at NED pretty well covers this one so I\'ll just copy and paste parts of it here:

\"NGC 7673 is a nearby, luminous starburst galaxy with an inner
asymmetric spiral structure and an outer structure showing evidence of
ripples. This ripple structure of NGC 7673 is similar to that in
NGC 3310, possibly caused by a merger or interaction with another
galaxy (see Homeier & Gallagher 1999). NGC 7673 also contains an
extensive array of clumpy star-forming regions throughout its disk
(Casini & Heidmann 1976). The starburst is occurring in the inner
portions of the galaxy within huge clumps embedded within an abnormal
spiral pattern (Huchra 1977b; J. S. Gallagher et al. 2000, in
preparation). There is also an extended, somewhat disturbed H I disk
(Nordgren et al. 1997). The most likely scenario for the creation of
the starburst in NGC 7673 is either through a minor merger or, more
likely, from an interaction with a nearby galaxy, NGC 7677.
Although a massive starburst is occurring in the disk of NGC 7673,
the H{alpha}-line kinematics are relatively quiescent, with a low
velocity dispersion (Duflot-Augarde & Alloin 1982; Homeier & Gallagher
1999) consistent with a rotating disk. Figure 7 shows the UV/H{alpha}
and optical images for this galaxy. We find that NGC 7673 has similar
structures in its UV and H{alpha} images, with most H II regions
following the locations of the bright UV star clusters.\"

So while it could be the result of a merger these authors favor it having interacted with NGC 7677. I\'m leaning toward both having happened in the recent past as NGC 7677, while obviously damaged doesn\'t seem sufficiently damaged to have wrecked so much havoc on NGC 7673. The distant shell like plume to the west, if a shell, would be a good indication a merger is involved. For NGC 7677 to be involved it must be at about the same distance as NGC 7673. That is the case. NED shows its redshift distance to be 150 million light-years. The actual difference is likely far less with most of the difference due to the rates these two are moving in relation to each other as seen from here. Non-redshift measurements put it at 160 million light-years. So it is likely NGC 7673 is likely further than its redshift distance. Due to how messed up it is no non-redshift measurements are available for it.

NGC 7677 is classified by NED as SAB(r)bc: with a starburst core. The NGC project says SBbc while Seligman says SBbc?. The pair was discovered by Albert Marth on September 5, 1864. Using a distance of 150 million light-years for both I get a diameter of NGC 7373 of 61,000 light-years not including the distant piece. When that is included its size is 95,000 light-years. NGC 7677 is 97,000 light years in size including the very faint plumes beyond the wide arms.

An HST image of NGC 7673 and more discussion about the galaxy can be seen at http://www.spacetelescope.org/images/heic0205a/ .

Two very bright red stars between these two galaxies cast a nasty gradient across both galaxies. I had to greatly dim the stars while dealing with it. 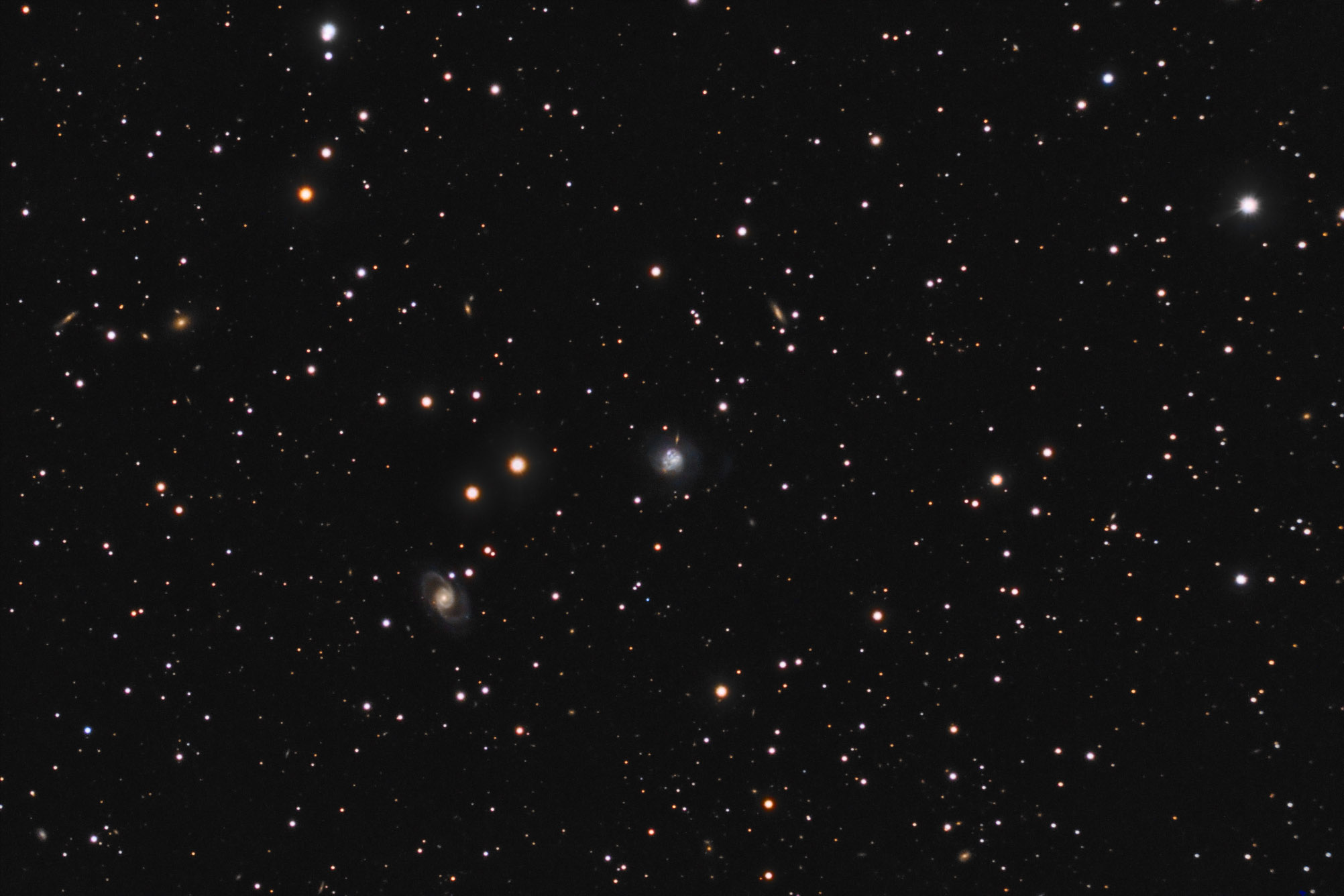 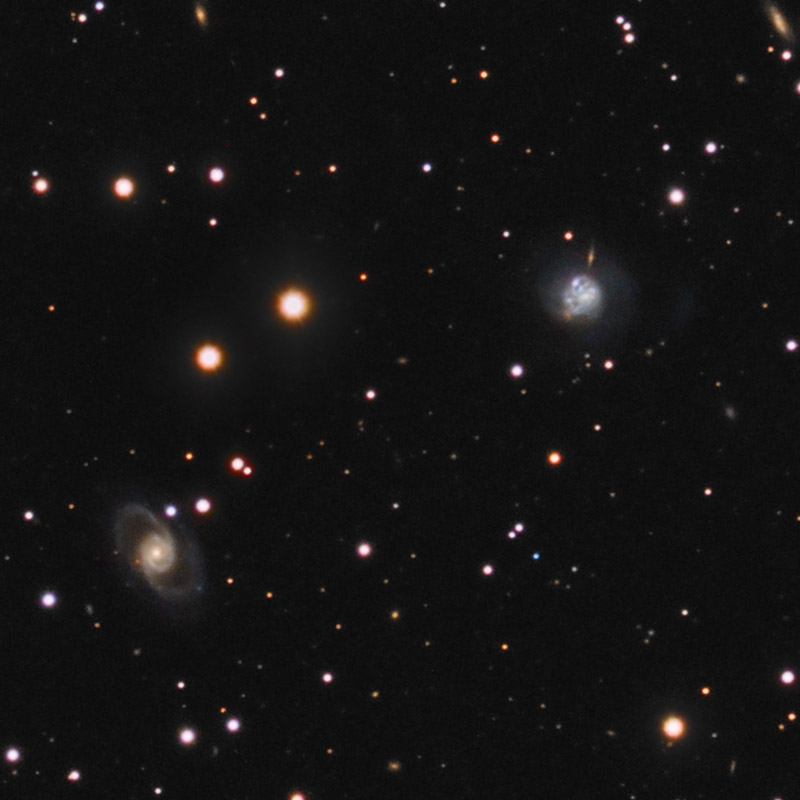 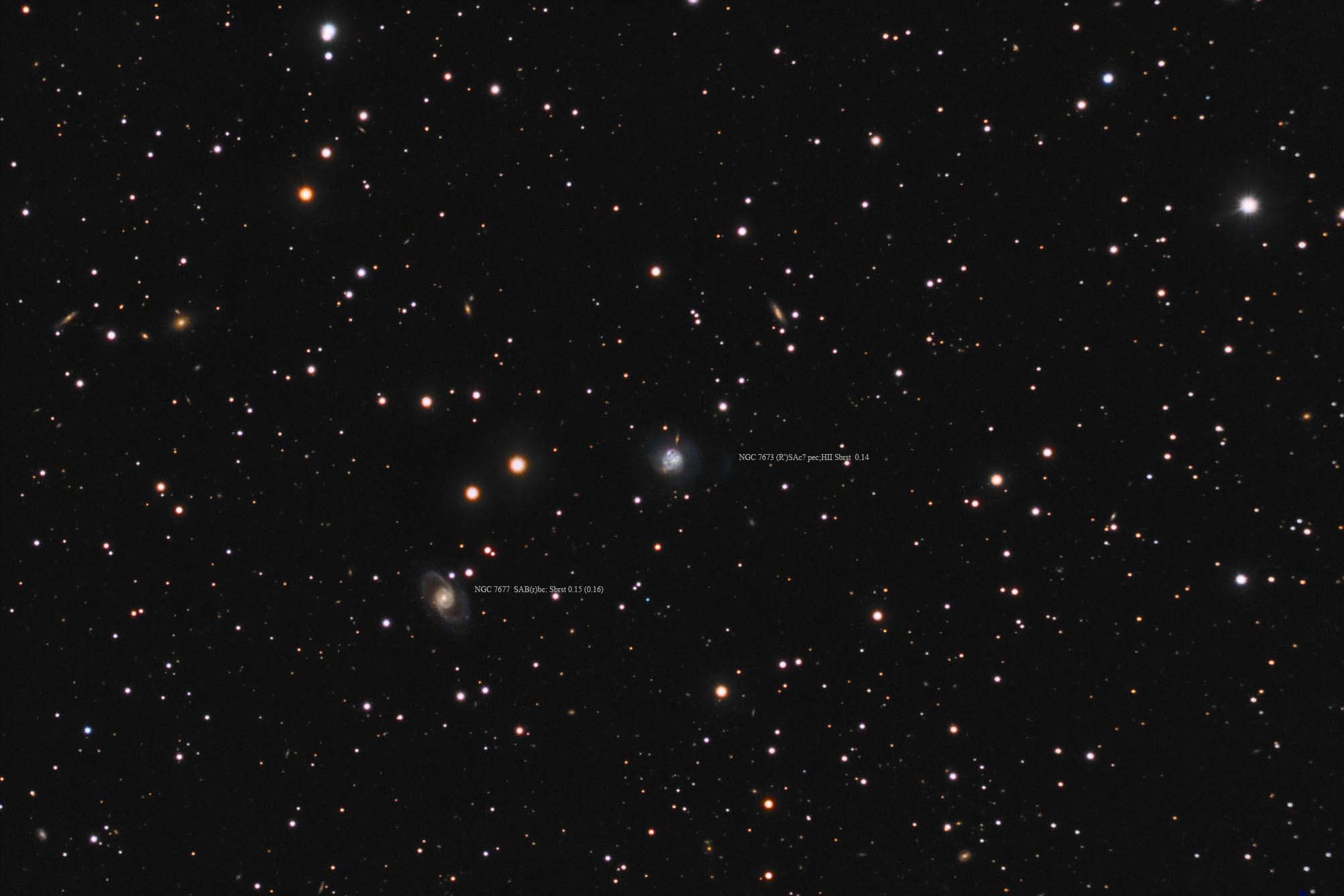