NGC 7711 is located in Pegasus about 170 million light-years distant and classed as S0 by both NED and the NGC Project. It is one odd galaxy that Arp overlooked though it sure belongs in any list of peculiar galaxies. Look at its core region and it is a pretty normal looking S0 type galaxy but on the right, there\'s a blob that someone at Galaxy Zoo decided made it a barred S0 galaxy. That appears to be wrong, however. Further right and down you see faint \"debris\". What is that? On the left side appear to be two spiral arms but they don\'t appear on the right side. Then right across the core of the galaxy is a faint dust lane way out of the plane for the \"arms\". How can all this be explained? One paper does have an explanation that accounts for much, but not all of this. The paper covers several other galaxies. Coverage of this one begins on page 8.
http://arxiv.org/PS_cache/arxiv/pdf/1102/1102.2905v1.pdf

Their explanation is that the \"arms\" are star trails from a dwarf orbiting about the main galaxy in an eccentric orbit that passes well away from the galaxy on the left side but near it on the right. We are seeing two passes around the galaxy. The blob on the right is (closest to the galaxy) the trails where they are compact on that side and the dwarf itself (the part to the south) -- see the annotated image. They don\'t mention the dust lane nor the \"debris\" to the southwest. I am going to guess the dust lane is normal to the galaxy itself before this encounter. Due to the encounter, much of the dust has been expelled leaving just a faint remnant of the original. The \"debris\" likely stars expelled from both galaxies due to the encounter but mostly due to the dwarf. That\'s my barely educated guess anyway. The galaxy was discovered by William Herschel on October 14, 1784. It isn\'t in either H400 program.

UGC 12673 in the lower right corner is the only other galaxy of note. It appears to have an off center nucleus. NED classes it one place as Sc and another as Sdm.

There are three asteroids in the image. Two very faint. I\'ve marked them all in the annotated image. The bright one would normally have the color frames barely showing after it but in this case, the color data was taken a different night when it was no longer in the frame.

Half the L data was taken on a night I was able to cool the camera 5C further than the other night. This temperature difference changed my image scale so normal aligning wouldn\'t work. Registar to the rescue. It handled the two different image scales quite well. I ended up processing the luminance channel twice as I didn\'t catch this the first time. The difference was sufficient to show all stars at the left edge as close doubles and highly elongated on the right side when aligned normally. The difference between the warm and cool nights amounted to about 8 pixels at the edges. I used the larger image scale as the reference frame to avoid dark edges. 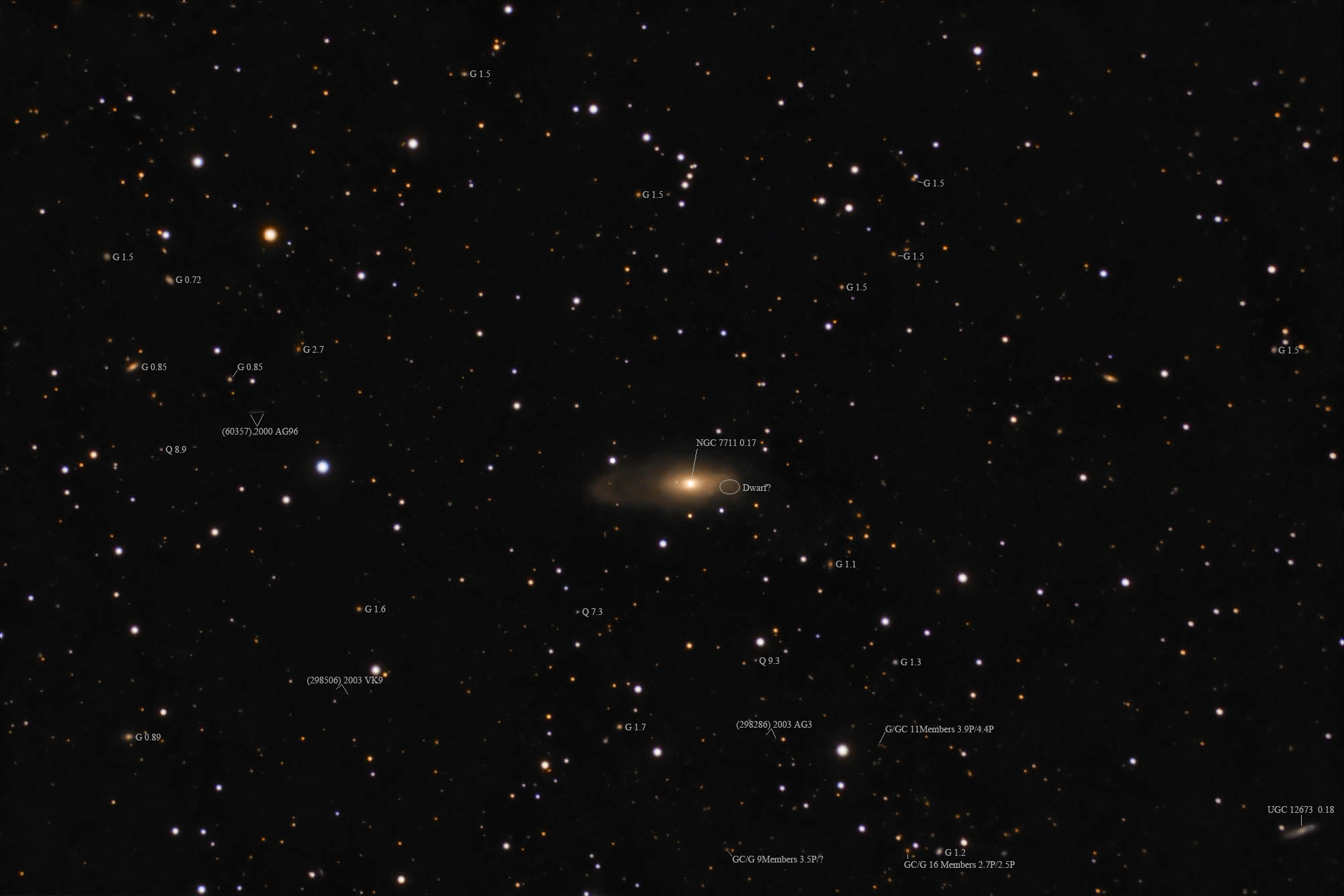 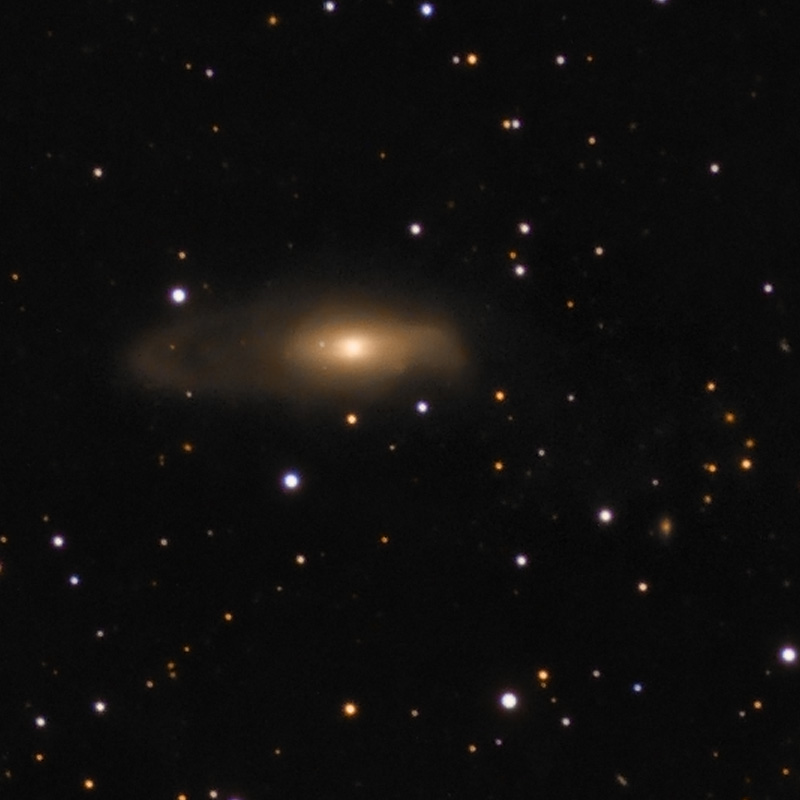 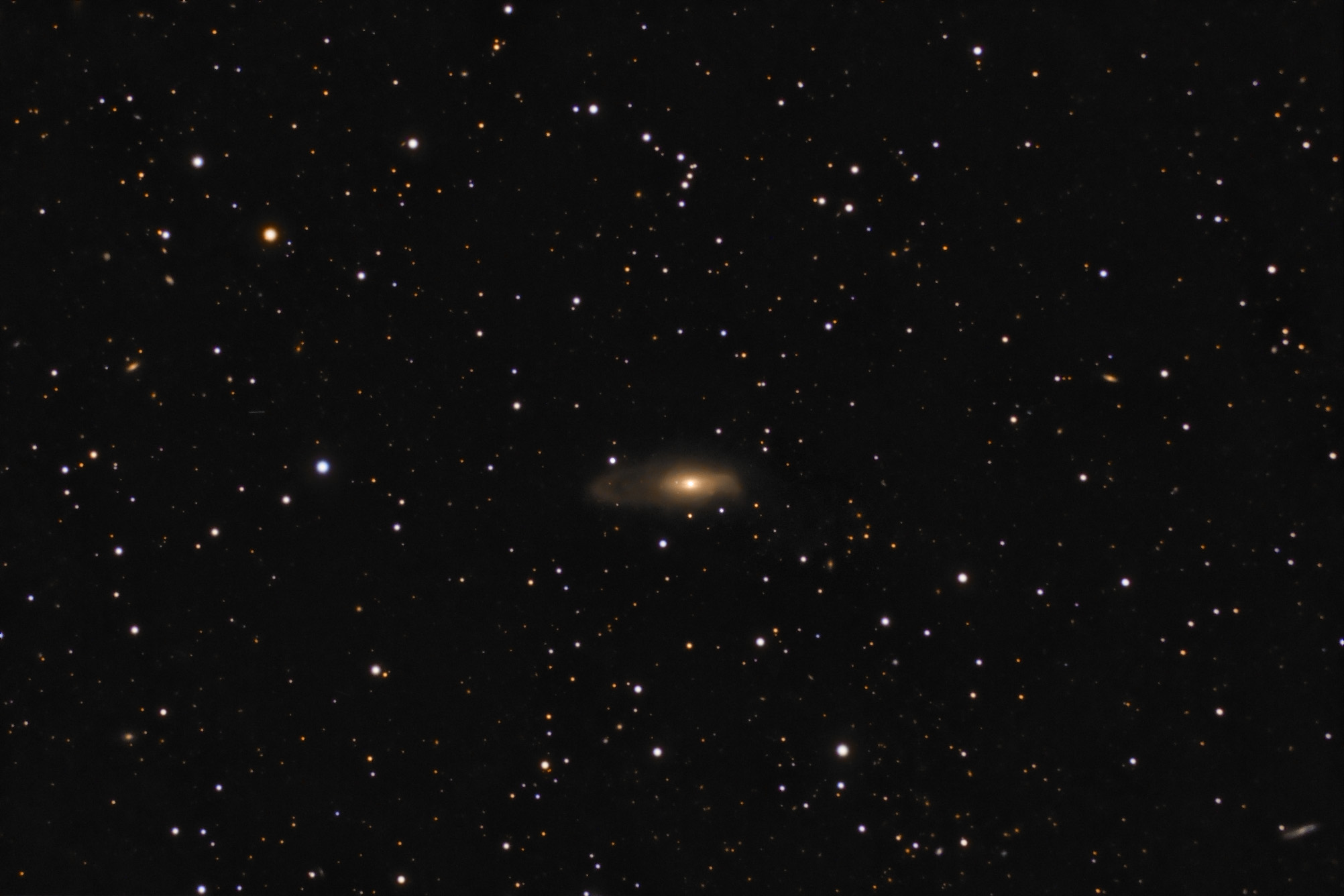