Why I imaged this field is a mystery. It wasn\'t on my to-do list yet the coordinates for the center of the image were. I find nothing on what drew me to this field. But it contains some interesting galaxies so worth the effort.

This was another night of severe smoke that greatly limited my ability to pick up the faint ring around NGC 7731. The only color image of it I found shows the outer ring quite blue but that just didn\'t get through the smoke. Brighter blue did. Nor did the smoke stabilize seeing as it often does. I should have picked up detail in the disk but didn\'t. It is considered today as a companion to nearby NGC 7732 though as late as 1976 it was considered well behind NGC 7732 and not related. It doesn\'t appear disturbed by any interaction with NGC 7732. It is classified as (R)SBa pec: though some sources call it SB0

NGC 7732, on the other hand, is not normal looking. The CGPG says of it: \"Disrupted and badly \'dented\' Sc\". Apparently, galaxies need body shops to fix up dents from accidents with other galaxies. NED classifies it as Scd pec. Redshift puts it at about 120 million light-years, 30 million closer than NGC 7731. The difference may be real or may just be due to their relative velocities. Both were discovered by Albert Marth on October 27, 1864.

IC 1504 is the spiral galaxy at the top of the image. It is a near edge on Sb spiral galaxy. It certainly is unrelated to the other two as its redshift puts it at almost twice the distance at 270 million light-years. It does appear to have a plume of some sort to the northwest above the plane of the galaxy though this may just be due to perspective. In any case, it appears more interesting than I expected at first glance. It was discovered by Stephane Javelle on August 19, 1892.

There\'s a 4th galaxy of some angular size in the upper right corner. It is the irregular galaxy PGC 72075. It has the same redshift as IC 1504 to is likely related. Did it cause the plumes in IC 1504? There\'s also PGC 72127 to the north of IC 1504 out of my frame with a similar redshift. Neither appears to be the cause of the plume to my eye. Maybe it is due to something it ate long ago.

This field is in Pisces just east of the circlet. 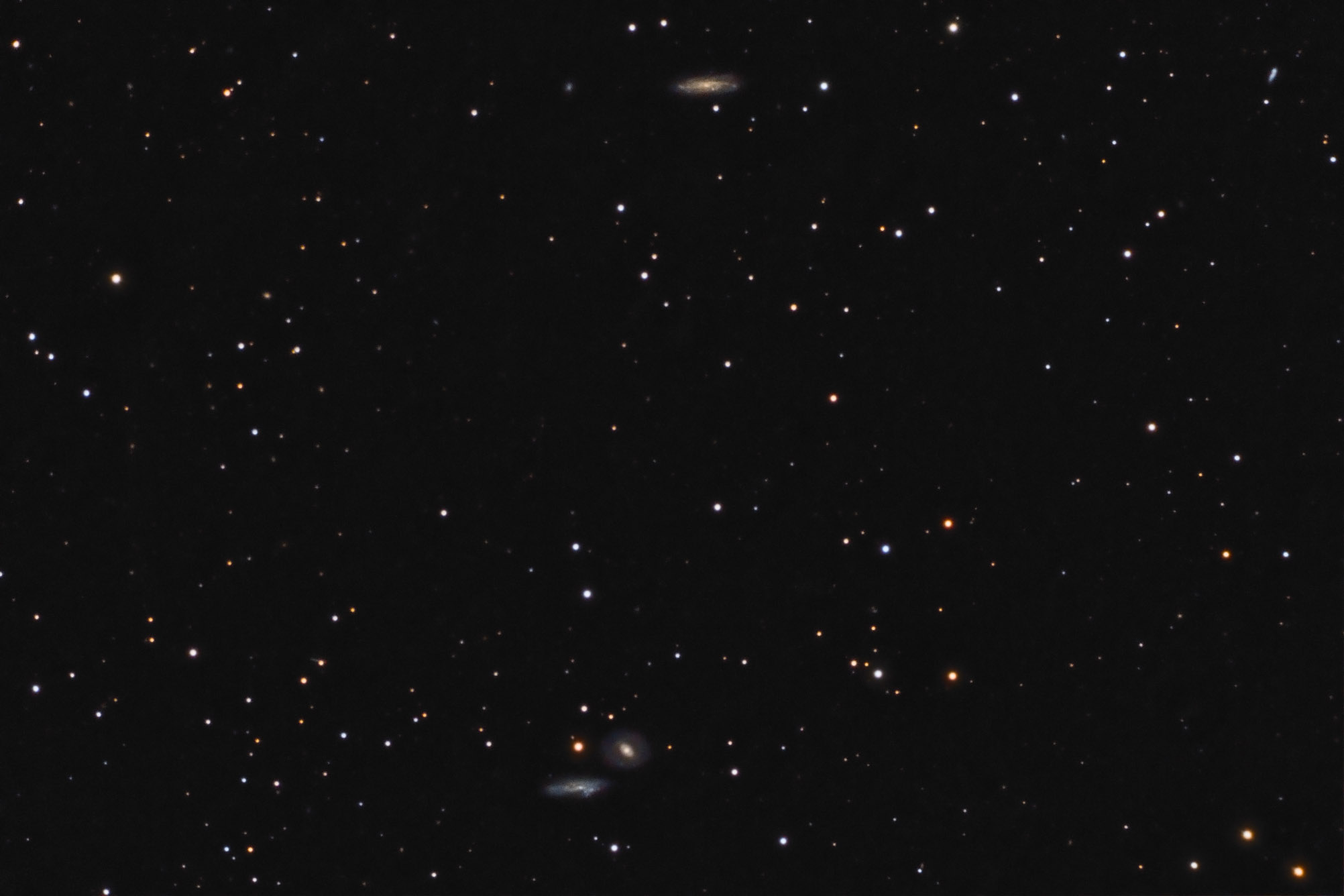 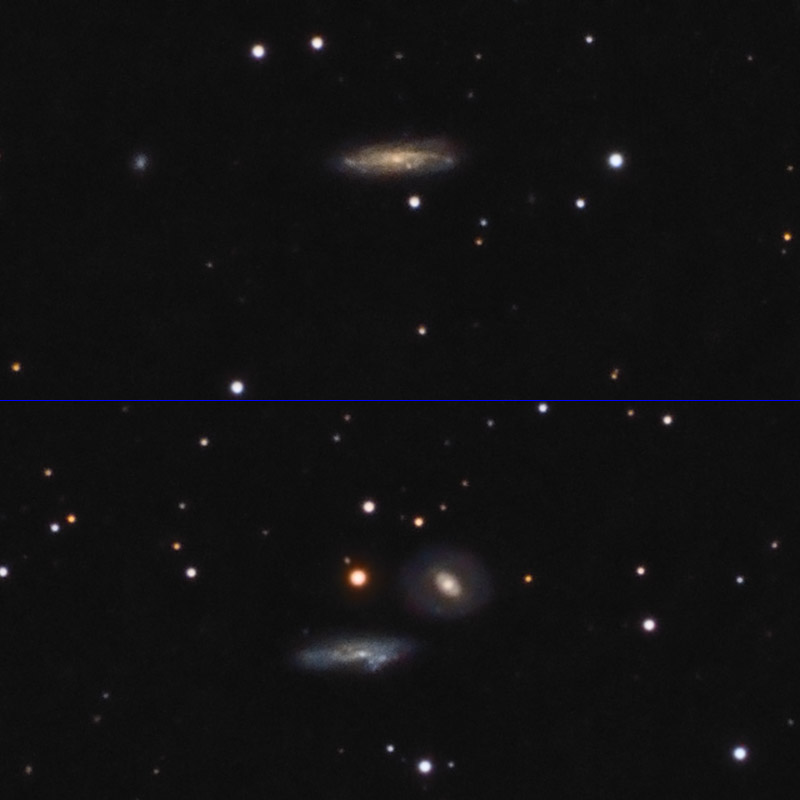 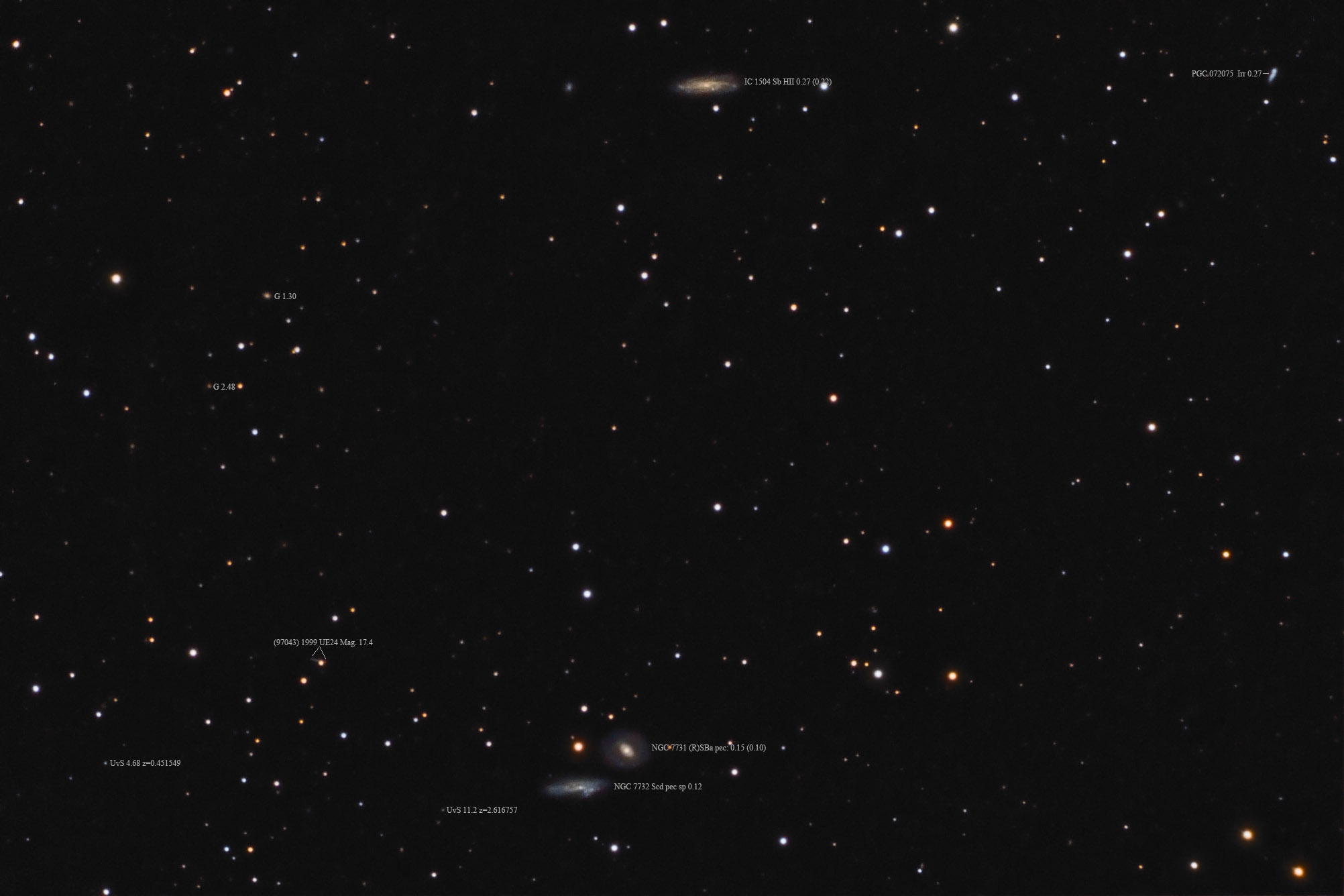