Near earth asteroid, 20114 CU13 passed by us March 11 about 5 hours UT. Since it was forecast (and really was) cloudy at that time I tried for it just before dawn the night before, March 10. There were some clouds but they soon cleared. I was able to get 30 minutes of data before dawn started to brighten the sky. First few frames were dimmed a bit by the clouds but otherwise, it worked well. The asteroid was about 1.2 million miles from us at the time of the movie and about 1.1 million miles at closest approach the following night so the difference is rather small. We had three other asteroids pass by, one only 38,000 miles out the last few days but all were either clouded out or too far south or lost in the sun from my view.

2014 CU14 was discovered exactly one month ago, February 11, 2014. It is quite large so it is good it kept its distance. Estimates put it at about 200 meters in diameter.

The movie consists of 30 one minute frames and covers about 32 minutes of time as it takes a few seconds to download each frame. The frames were taken at 1.5\" per pixel then downsized to 3\" per pixel to reduce the size of the animation but keep the full frame. Due to the bright moon not far away the image is rather noisy which greatly enlarged the file. During the imaging run, the mount was tracking on the asteroid rather than the stars. No alignment of the frames was needed. While its motion was calculated from orbital data a couple days prior to the night the earth hadn\'t perturbed the orbit to any great extent so the values I used to offset from the sidereal rate were sufficient to keep the asteroid near the center of the frame. Computers and today\'s robotic mounts make such feats rather easy to accomplish. Not long ago even the pros had a hard time doing this type of tracking. The asteroid moved about 1 minute of arc per minute of time. So the star trails pretty well define 1 minute of arc. 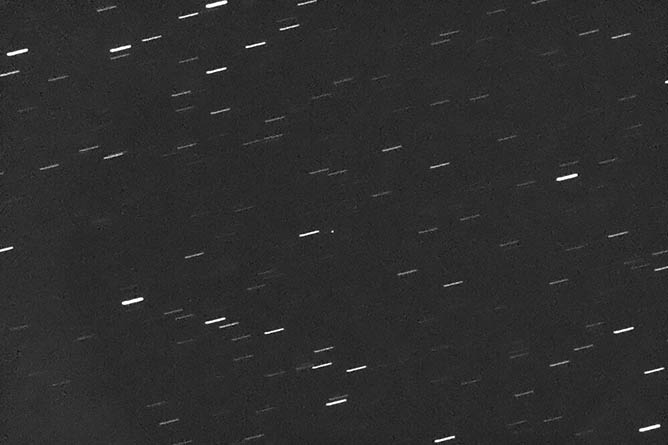