On June 3, 2014 a small asteroid, 2014 KH39, passed by at only about 10% further than the moon. It was discovered only days earlier on May 24. Guess this was my birthday present rather than the dud of a meteor storm that was possible that night. It\'s size is estimated at about 22 meters (72 feet for the metrically challenged). That makes it only slightly larger than the rock that lit up the sky and shattered windows last year in Chelyabinsk Russia. So catching such a small object at that distance was a challenge I had to take up. I quickly discovered it was totally invisible on a frame running at sidereal rate (tracking the stars). It was moving at 2\" of arc per second of time when I imaged it about 12 hours before closest approach (closest was in the day with it below my horizon). That speed and its extreme faintness meant it only sent a couple photons to each cell of my detector, not enough to pull it out of the noise. I had to track on the asteroid\'s orbital motion and trust the mount to know how to do that.

Unfortunately this was the day I did my annual spring cleaning of the telescope system. It was completely disassembled, optics cleaned, gears degreased then regreased, desiccant for the CCD chamber recharged and the friction ring for the filter wheel changed as the old one after 10 years of hard use had died. When all it put back together some pointing accuracy is lost. For accurate tracking without guiding I need to redo the Tpoint map. Even with automation that is a several hour job as I take 800 points. It had been cloudy all day so I didn\'t expect it to suddenly clear somewhat. It was obvious the \"clearing\" was temporary and I had to work fast. I found that this time the scope was much closer to proper alignment than ever before when I did this. With no time for a new Tpoint map I hoped the old one would do. Also after regreasing of the drive gear, until that grease is fully worked in the periodic error would be erratic as the grease found its home position. I\'d exercised the mount from stop to stop on both axes some 50 times but even that is never quite enough. I need to do that at least twice as many time before it gives me immeasurable periodic error. Still I got lucky and it was nearly enough. For some reason, not yet determined the eastward motion needed to follow the asteroid perfectly was a bit too slow. With the temporary grease created periodic error it would sometimes be correct and other times too slow. So there is some horizontal elongation of the asteroid. Then it wasn\'t really clear. Transparency varied greatly frame to frame. A couple times the asteroid nearly vanished. Seeing was lousy so the size of the asteroid also changed frame to frame. Still it came out better than it would have any other night after my spring cleaning session.

Each frame of the movie is a one minute exposure. The length of the star trails shows the asteroid\'s 119 arc second motion against the stars each minute of time. I took more data but the clouds nailed me. This is the best 20 minutes of the 40 I tried. The rest just had too many black outs from clouds. The camera was set to bin 3x3 for a 1.5\" pixel. Conversion to WMV by Window\'s Movie Maker resizes somewhat so I can\'t tell exactly what the final scale is but it is close to 1.5\" per pixel.

At the middle of the movie, about frame 9 the asteroid passes a fuzzy streak. That is galaxy CGCG 221-016 at 230 million light-years. Since the asteroid was about 4 light seconds away at the time the galaxy was over 3 quadrillion times more distant than the asteroid. I think that\'s a record for me. The asteroid at 22 meters and the galaxy at 57,000 light-years by NED\'s size and distance estimates works out to a difference of 25,000,000,000,000,000,000 times. I think by the American system that\'s 24 quintillion times larger. I hope I haven\'t missed a few zeros there. 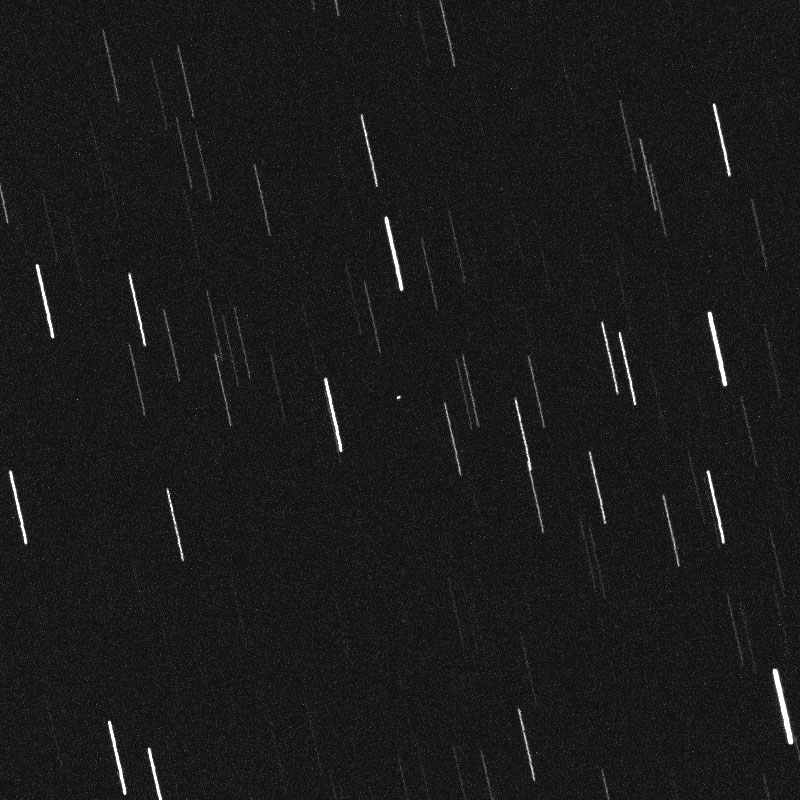