While I\'d taken some of the spiral galaxies that hover around the edges of the Coma Cluster of galaxies, ABELL 1656, I\'d not taken the center of it which is mostly S0 and elliptical galaxies. My field of view isn\'t sufficient to begin to cover the cluster. NED lists it as having a diameter of 5.33 degrees. I\'d need over 100 images to cover it all. Fortunately, it is highly concentrated so I get a lot of its members by taking the center. NED lists it as having 484 members which is a severe understatement as there are over 1000 galaxies in my image alone with redshift data. Far too many for me to even think about annotating. I settled on just listing those in the IC and NGC catalogs plus a couple PGC galaxies about as big and bright as the NGC and IC galaxies. The cluster has two main cD type galaxies that are huge and thus anchor gravitationally the cluster\'s vast members. The normally sized galaxies look like moths swarming around two lights being small in comparison to these two monsters. The cluster is listed with a redshift that puts it 330 million light-years distant. At first, I wasn\'t going to include distance figures for these since they all are about this distance. But due to their orbiting the barycenter of the cluster which is rather massive they can have rather high velocities toward or away from us. Also listed in parenthesis is the non-redshift distances which usually stick much closer to the 330 million light-year distance than does the redshift values. Comparing the two seemed interesting so I decided to include these distance estimates.

For some reason, I seem to have centered on the western one NGC 4874 so I\'ll start this huge text file there. NED lists 71 different catalog entries for it. SIMBAD adds a few more. SIMBAD also lists 1850 reference paper on it. Needless to say, I didn\'t begin to check them out as I would normally do. NGC 4874 is a huge, very diffuse galaxy. This makes determining its size difficult as it has no obvious edge to key on. Also, the halos around all the galaxies hovering about it add to this confusion. Best I can say is it is at least 250\" of arc across which gives it a diameter of some 400,000 light-years. Now that\'s big. It has no sign of dust or gas, just old stars, and a jet of plasma seen by radio telescopes that extends some 1700 light-years from the core indicating it has an active supermassive black hole at its core. Hubble shows it is surrounded by many globular clusters as well as globular cluster sized galaxy cores. Apparently, only these cores remain after losing the rest of their stars to the massive galaxy. These are too faint for me to pick up. The galaxy was discovered by William Herschel on April 11, 1785. I was surprised that it isn\'t in either H400 observing program.

Above and a bit right of NGC 4874 is an odd wedge-shaped diffuse object pointing to the right. Is it a piece of IFN much brighter than the hits I see elsewhere in the image or stars. I didn\'t find anything on it. If anyone does please let me know. Also, as shown on the annotated image NGC 4874 carries a Di classification while 4887/9 a Dd classification. A lone D stands for Diffuse in an obscure classification system devised by William Morgan. But that had no further subdivision that I can find. He\'s the one that came up with cD for big diffuse galaxies that anchor galaxy clusters. That\'s the only piece of his system that is still used. So I asked NED what Dd and Di meant. They replied they couldn\'t find out either saying; \"I have to claim that they have been \"lost in the ether\".\" They did then say \"BTW, we have changed our procedures such that this type of data tracking will not lose anything again.\" That indicates there are likely similar problems at the site of this at NASA\'s site. If any history buff knows about these designations please let me know and I\'ll pass it on to NED (NASA/IPAC Extragalactic Database).

The other anchoring galaxy is NGC 4884/89. Like NGC 4874 is it so diffuse determining its size is extremely difficult. I get a size of about 3 minutes of arc so it isn\'t as large. That translates to 300,000 light-years. But both galaxies have a very large halo encompassing both. It extends some 17 minutes of arc in my FITS stack. That would make the two some 1.6 million light-years across. There is some IFN in the background as well making this measurement somewhat iffy. It carries two NGC numbers. William Herschel found it on the same night as NGC 4874 and got the position right. Then 80 years later, April 22, 1865, Heinrich d\'Arrest found it but apparently gave slightly wrong coordinates. This caused Dreyer to enter it again as NGC 4884 when compiling his catalog that became the NGC. Most use the NGC 4889 designation. It isn\'t in either H400 program either.

As there are so many IC and NGC galaxies I\'m just going to list their discovery info. A few warrant a bit more detail. I\'m taking them right to left across the image. 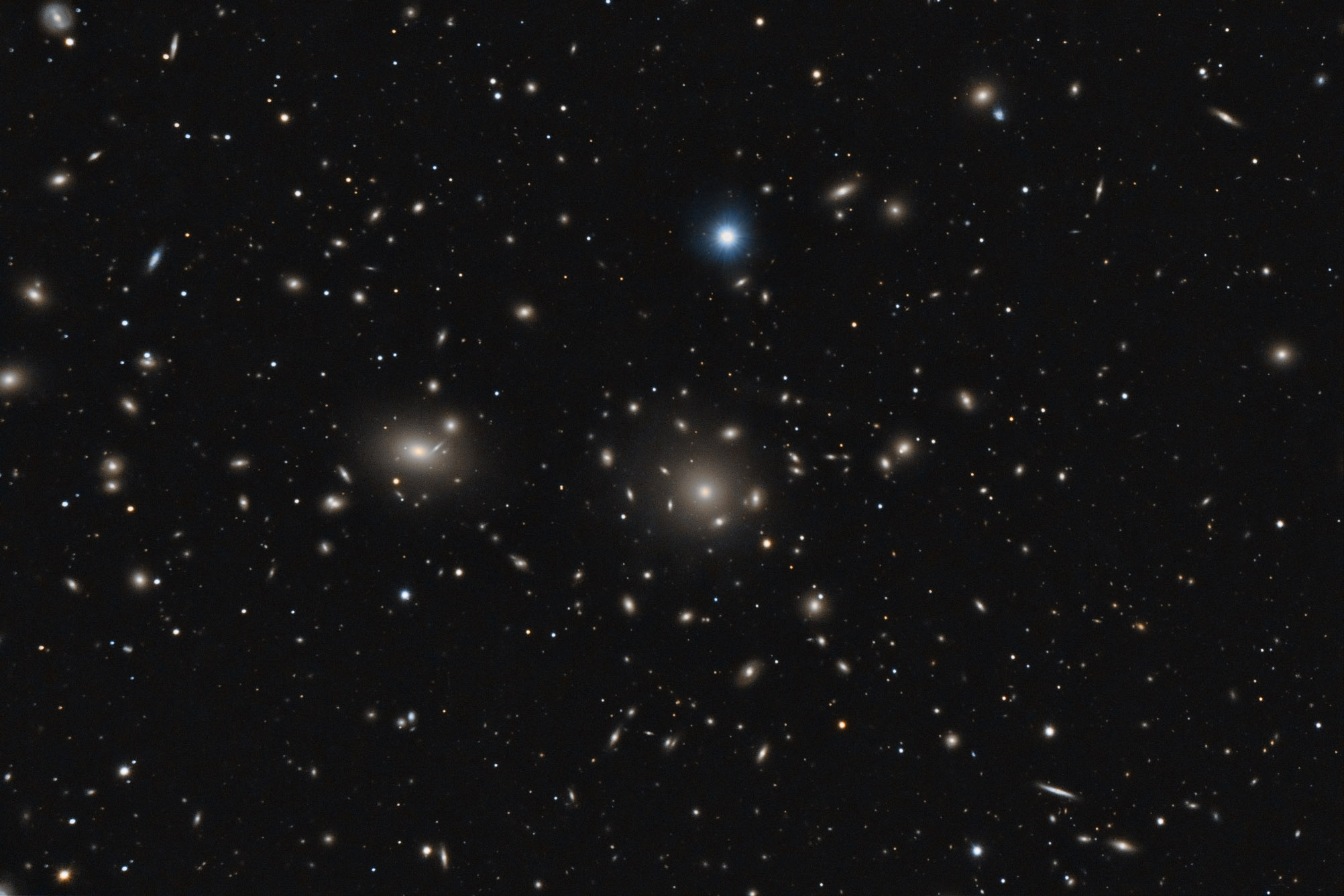 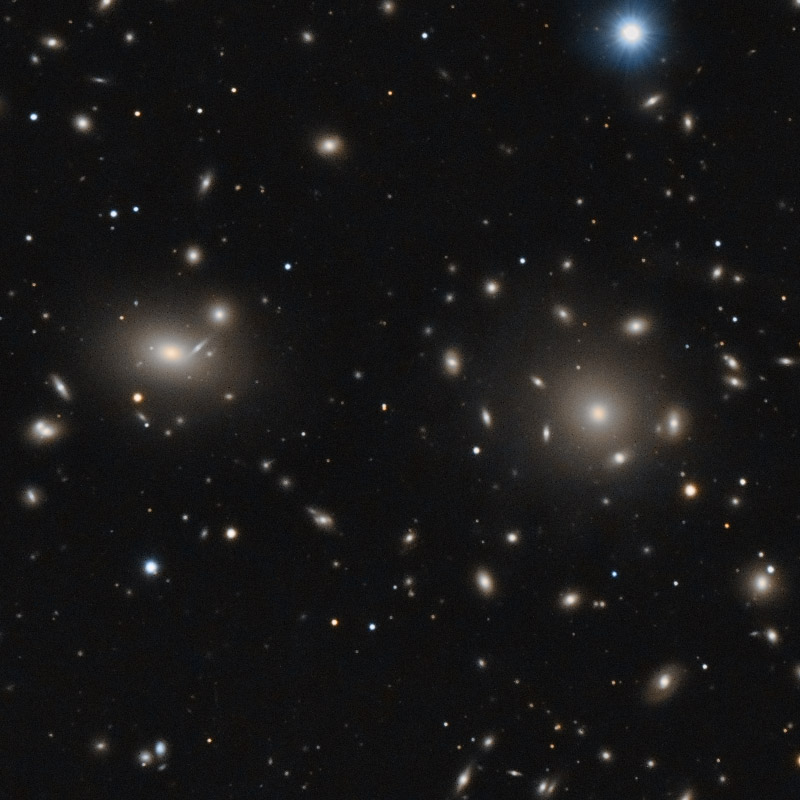 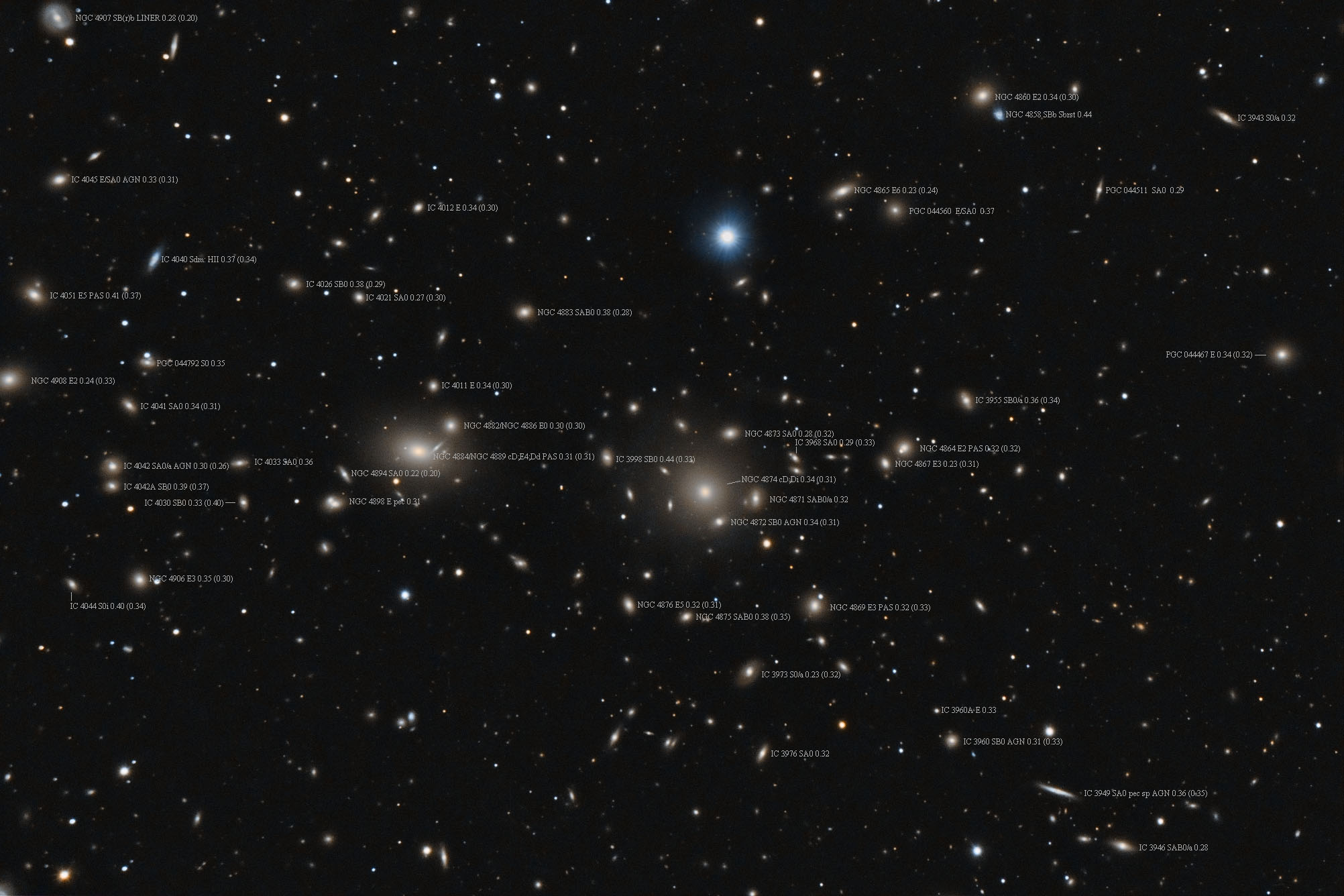