Barnard 5/LBN 1471 is a dark nebula in southern Perseus about half way between M45 and the California Nebula. So a rather dusty part of the sky. 42 Persei is less than a half degree from its northeastern edge though out of my frame. I had to move B 5 well east to get rid of either its glare or ghost, some positions had both in the frame. Oddly some sources claim the star is Eta Persei which is much brighter and in the northern, not southern part of the constellation. I don\'t know how this error got started or what keeps perpetuating it.

Barnard 5 is a rather indistinct dark nebula and I\'d likely not have gone for it but for a very odd object in it. It is in the southern part of my image and thanks to poor conditions very weak. I had it on the reshoot list but that never happened. The object is a star which might be the protostar IRAS 03445+3242 that apparently illuminates a weak reflection nebula to its northwest. The position of the star is rather uncertain but lies just west and a bit south of the star in my image. The error ellipse doesn\'t quite reach to the star but its brightness matches and nothing else is around. The nebula to the northwest is more certain, it is [WBR2005] J034743.0+325210 and contains the Herbig Haro object HH366E5. Now that\'s a mouthful for such a weak object.

Several dark nebulae are parts of Barnard 5. I\'ve tried to label the centers of some of them in the annotated image.

Surprisingly several galaxies are seen through the dust though appear heavily reddened by the dust. I suppose they could be red galaxies to start with that got even further reddened by the dust. It would be interesting to see what a spectrograph would show for their stellar makeup. I found nothing on this, however. Only two had redshift values which are shown in the annotated image. I labeled a third galaxy from the 2MASX catalog but have nothing much on it. Just that it is likely the most heavily obscured of the three. Many other, near stellar galaxies, are seen around the outside of Barnard 5 that likely are larger, bluer and brighter than seen thanks to all the dust. Two of the brightest are near the right edge a bit above the centerline. 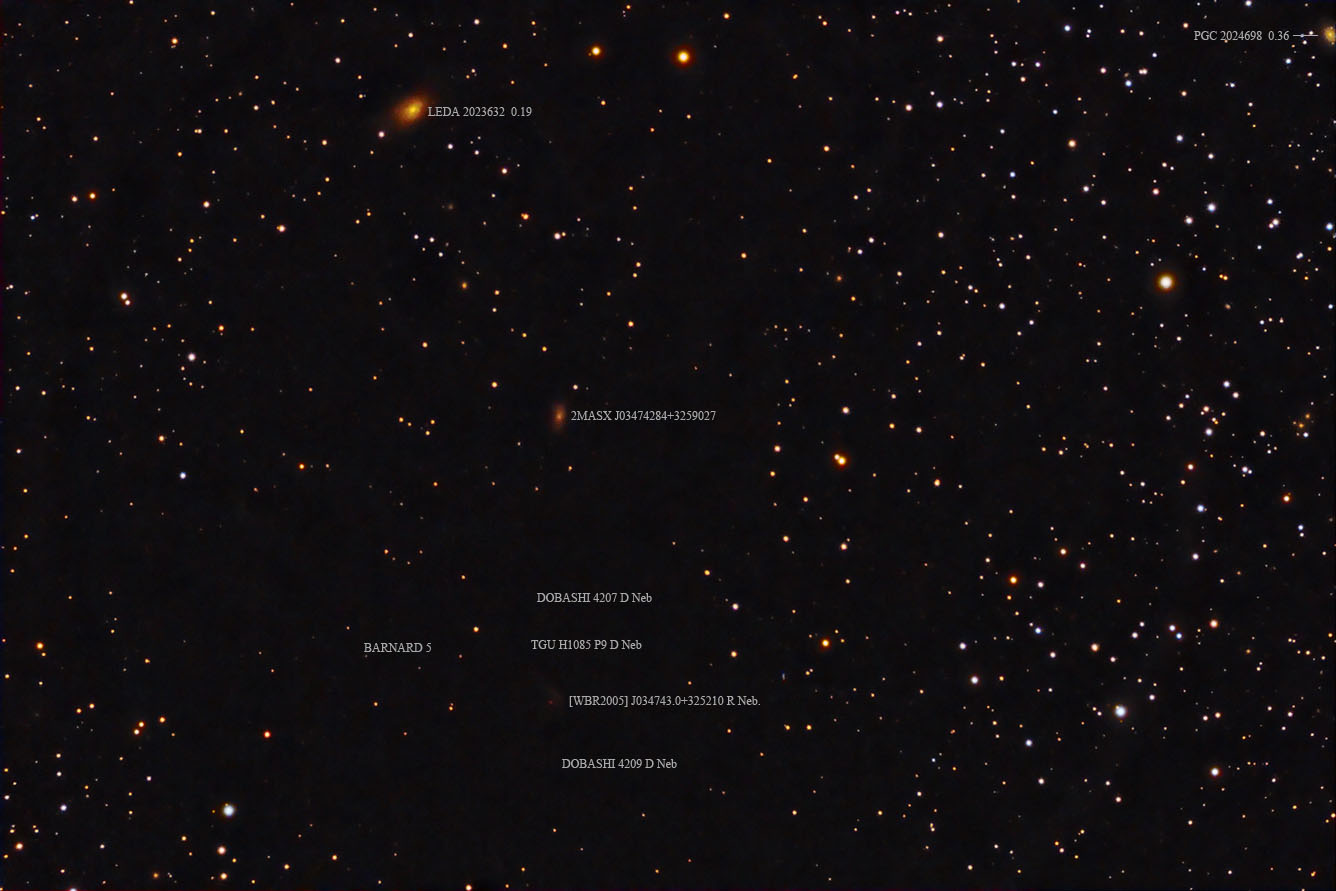