Berkeley 9 is an open cluster in Perseus. It is a very old cluster, as clusters go. Most are torn apart before they are even a million years old but Berkeley 9 has managed to hold together to reach the grand old age (for an open cluster) of nearly 4 billion years. That means all its bright young blue stars are history with only white to red stars remaining plus a few red giants in their death throes. It is said to be about 2,700 light-years distant. Also, it is listed as reddened by 0.79 magnitudes so even white stars will be somewhat red due to intergalactic dust and gas. Same as dust and gas in our atmosphere turns a setting or rising sun red by scattering away the bluer light. The cluster is listed as having a maximum diameter of over 14 minutes of arc though most of its stars are confined to a diameter of about 2.4 minutes.

I noticed near the right edge below center a group of stars. After a bit of searching, I find that is Czernik 9. Only open cluster nerds are likely familiar with these clusters. I find its size is listed at a maximum of 6.6 minutes meaning I likely captured most of it. Its core is only 1.6 minutes across. How that is defined I don\'t know as I see no grouping of that small of a size. It is listed as being 5,400 light-years distant twice as distant as Berkeley 9. Its age, however, is quite a bit younger at 630 million years old. That explains the higher count of blue stars. Though it too is reddened by 0.79 magnitudes indicating there is little dust and gas in the 2,700 light-years beyond Berkeley 9.

Due to my everpresent clouds this winter (2017-2018) I was able to get only one blue and one green frame rather than my usual 2 but thanks to no satellites in either and sufficient signal in the frames I believe the color reasonably correct. 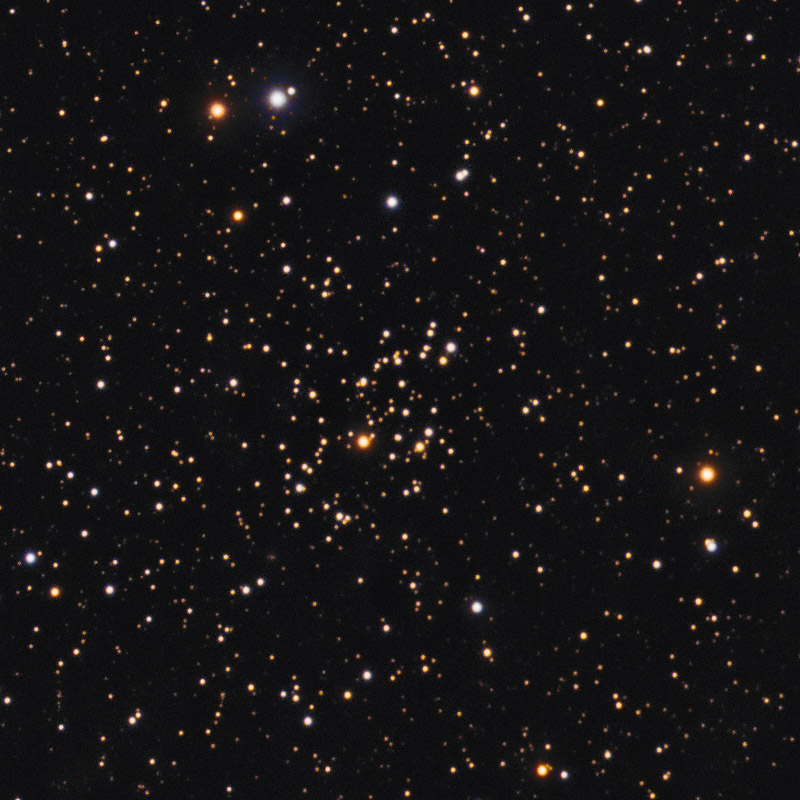