34 Minutes in the life of Comet C/2009 R1 McNaught. This was taken in a very bright dawn sky that got over three times brighter during the 34 minutes it was taken. Some frames were lost to clouds. A couple show space junk flying by as well. Due to the rapidly brightening skies it was very difficult to process this to hold the tail detail as the sun was trying to drown it out. As a result the head of the comet seems to grow in fits and starts over the 34 minutes. I processed for the tail and sky background and ignored the head for the most part. It took three days of trial and error just to get it to this point. With cloud haze varying with every exposure and the dawn sky giving a background count of 3000 to 10,000 (normal for 1 minute is 250) this was a processing nightmare.

Unfortunately, the comet, for me, is moving deeper into the dawn sky so there\'s no second chance on this one. Besides there\'s been a near constant mist falling since I took this movie. In fact a very light mist was falling while I imaged this. It was semi clear in the area of the comet. I spent 40 minutes holding an umbrella over the scope while this was taken. What we won\'t do for this hobby. Another new moon clouded out. I\'m falling further behind in my Arp galaxy imaging.

The comet has an orbital eccentricity of 1.0003. If correct that would mean it is on a hyperbolic orbit and will never return. It was about .72 AU (67 million miles) from the sun and 1.16 AU (108 million miles) from the earth when I took this movie. It will be closest to the sun on July 2 at about 0.40 AU from the sun. Unfortunately it will be lost in the sun\'s glare at this time. It\'s closest approach to the earth is June 15, 2010 at 1.14 AU. So this was taken at nearly its closest approach to us.

Movie is about 4 meg so will take a while to load. Once loaded it will run more smoothly. 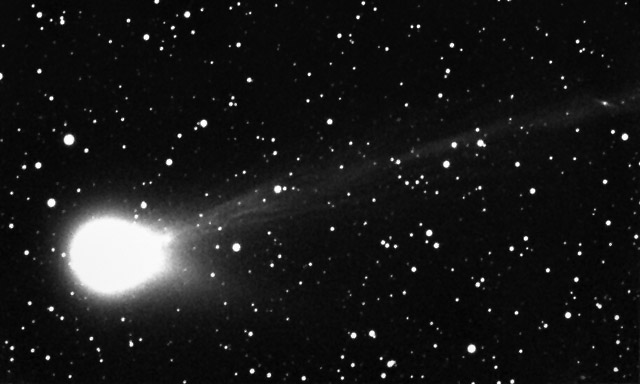