C/2011 L4 (PANSTARRS) was a nice comet in the second week of March. Unfortunately, my lousy weather and neighbor\'s trees prevented me from imaging it until June 13, 2014 when it was far to the north. At just over 2 AU from both the Earth and the Sun I wasn\'t expecting much. But its anti-tail running almost due north was still there and is stronger and far more well defined than the dust tail to the southeast (upper right). I see no sign of a gas tail nor the typical green color from comets closer to the sun to get enough UV light to create it. It\'s rather white with a reddish tinge. I enhanced the comet\'s color way too far trying to find any color in it.

Putting together this composite was \"fun\". I now remember why I don\'t do this very often! The color data is made from three 5 minute frames each color taken tracking the comet. The luminance was made from 15 5 minute frames also taken tracking the comet. These are all unguided letting the Paramount and The Sky track the comet using the orbital elements of the comet to govern tracking using offsets on both axes added to the standard sidereal rate. Then two nights later when it was again clear I imaged exactly the same starfield this time tracking on the stars using 3 5 minute color frames per color and 3 10 minute luminance frames. Then the comet\'s color image (less the stars) was placed into the starfield using the comet\'s position at the start of the very first luminance frame. To set that I used that first frame as a layer which was then removed so it should be accurate to one second of arc which is my pixel size.

The reason for only 5 minute frames for the comet is that it was outside the dense portion of my T Point map that allows accurate tracking without guiding. I found it was still reliable for 5 minute frames so used those. The starfield luminance frames were 10 minutes each and guided. The reason for only three 5 minute frames of each color is dawn was fast approaching and I didn\'t have time for my usual 2 ten minute frames. My dark skies are very limited at this time of the year and I had to wait for it to clear eating up much of that time. This is why the starfield had to be done another night as well. Just no time for both the same night.

Removing the stars when there are only 3 frames to work with in the color data was an interesting exercise. Lots of trial and error in CCD-Stack finally found the right parameters. I used a Poisson rejection routine with a sigma of .2 then combined using the minimum mode. That completely removed the stars from the luminance and left only one small smudge to clone out of the color data. That was caused by the brightest star in the field (lower right).

I wish the weather had allowed me to try earlier when the anti-tail was much stronger. Also, I needed a wider field of view as it stretched some 6 or more degrees at one time. It went out of my very limited field. I should have rotated the camera to put it along the long axis I suppose. I\'d hoped to catch more of the dust tail but that is just a blob on the southeastern side right now.

In any case, it is surprisingly bright even 3 months after it came by and worth a look. This is one time I wish I had a OSC camera. Simplifies color with a moving target like this. Also, a shorter focal length than the 14\" LX200R offers would help as well! 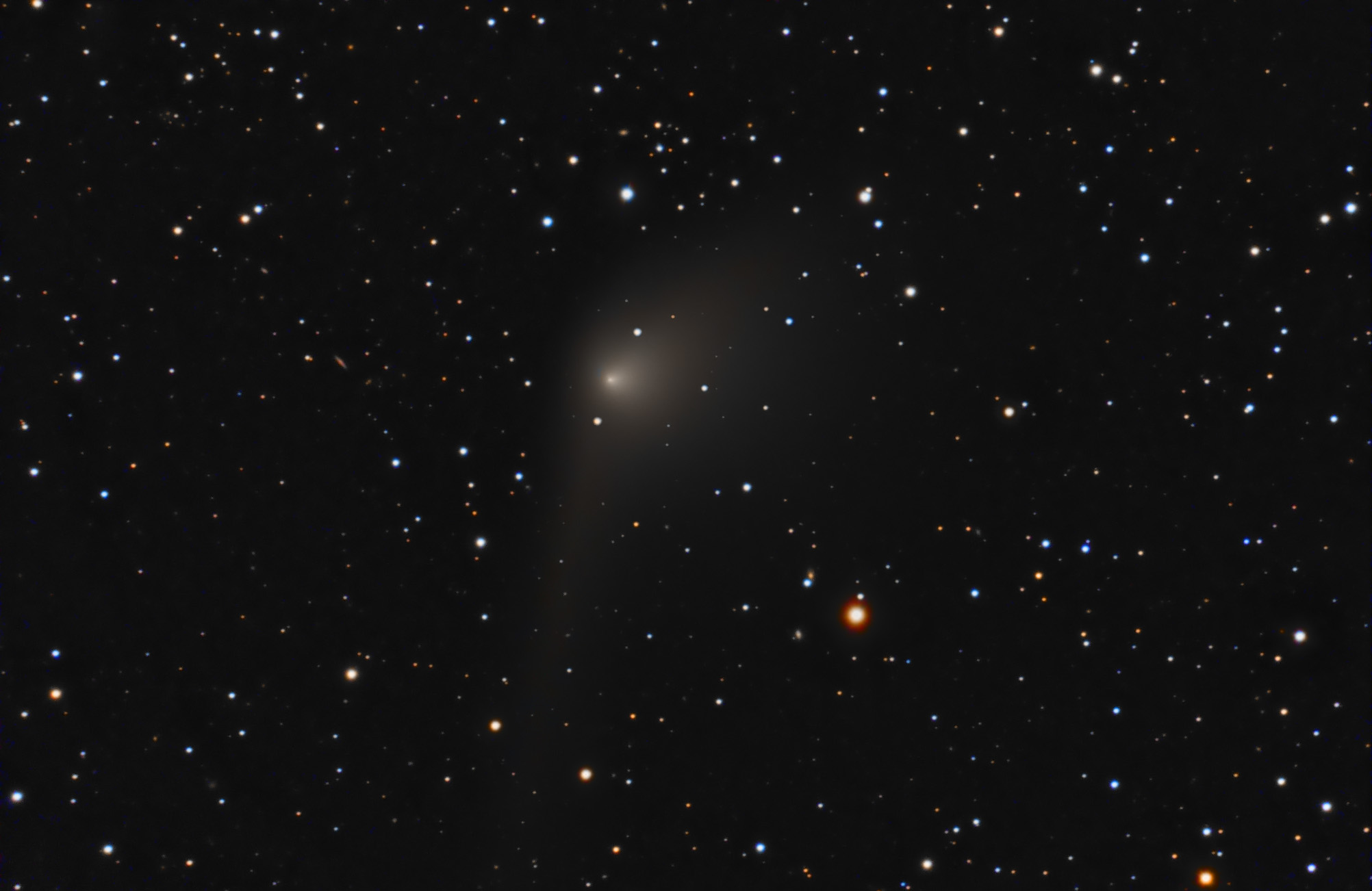