Without much time before dawn started I decided to try for Lulin. But no sooner was I set up and the cloud alarm started screaming. The image wasn\'t all that bad so why? Turns out it was snowing! I stepped outside and could see stars down to about magnitude 2.5 rather than the normal 6.5 but fine snow was also falling. Since it was coming from the north I decided to try and get something of Lulin. I didn\'t get much as the clouds made the tails invisible and out of 2 hours of data collection only 6 minutes of star data and 6 minutes of comet data was usable as the clouds kept getting too thick. So I didn\'t get much.

When processing a fast-moving comet the best way of doing it is to process the stars and comet separately. This one is moving so fast after taking an hour of comet data the area of stars it was in was clear of the comet so I went back and took the star field. Then I processed the comet to remove the stars, which were long trails as I was tracking the comet\'s orbital path. No guide scope, I just program in the orbital elements of the comet and the mount tracks based on that data. You need very accurate polar alignment but I have that. Adding to my blood pressure is that the cloud sensor runs whenever the roof is open so it was screaming the whole time. Not only was the beeper and warning horn going off a computer voice was saying Uh-Oh! every few seconds. I wired it to always be on when the observatory was open I didn\'t forget to turn it on when the observatory was open. I\'m rethinking that!

It\'s amazing with only 6 minutes of data through clouds I was able to get much of anything of the comet. This is a pure RGB image, no luminance data was taken due to the clouds. Star color is weak due to lack of color data. A faint hint of the dust tail to the left is visible. All the rest was lost to the weather. Image scale is 1.5\" of arc per pixel. The galaxy in the comet toward the left is 2MASX J12414465-0415545, an unclassified galaxy of magnitude 15.7 at 875 million light years per redshift data. In a normal exposure it would be big and bright but thanks to the clouds it is barely seen. 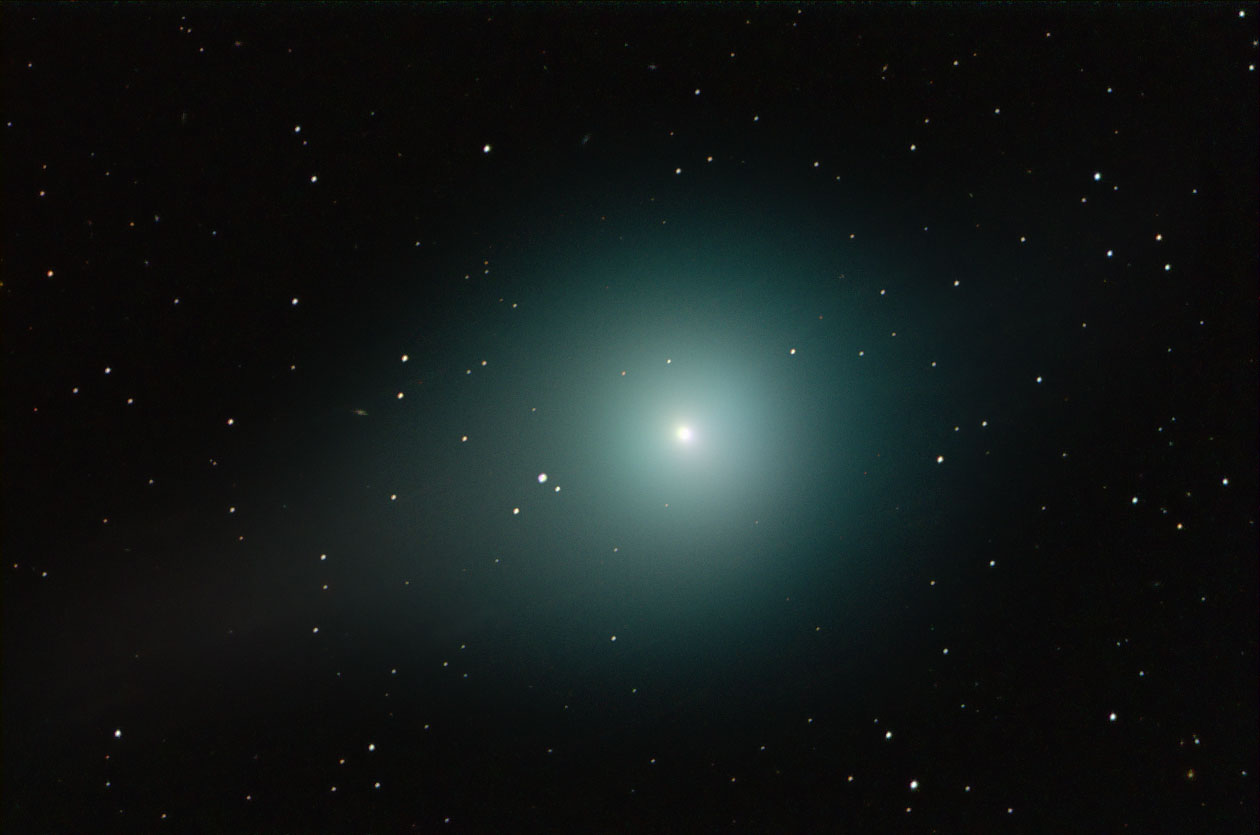