PGC 60095 is more commonly known as the Draco Dwarf Galaxy. There are many dwarf galaxies orbiting ours. I\'ve run some of them like the Leo I, II and III. The Magellanic Clouds are often included but some say they are just passing by and not really in orbit. The debate rages on with those two and may swing back tomorrow. The Draco Dwarf is one of the very smallest of these orbiting galaxies. It contains very few stars, they number only a few thousand. It contains far fewer than most globular star clusters for instance but covers a much larger area of space. The stars are so spread out it is hard to recognize as a galaxy. In fact, it covers an area slightly larger than my field of view. This makes it difficult to find in my image. Most of the very faint stars in this image are members of this galaxy located some 250,000 or maybe 300,000 light years away. The distance depends on who you believe. The scope was pointed to the center of the galaxy though the stars aren\'t centered on the center of the galaxy. Most are off center to the upper left. There are members going off the top and left edge of the image as well. Since these weren\'t seen until I processed the image I didn\'t realize how off-center from its supposed position it brighter members were. I took this image I had planned on getting another night or two of data but somehow never did, then forgot about it. I was cleaning out the hard drive months later when I came across these files. The hard drive in the control computer, at the time, was 100 gigabyte drive which filled rapidly with data I have to move off onto an external drive. Each image requires about 2 to 3 gigabytes of data so the hard drive will fill rapidly. I now have several terabytes of data on external drives. I will soon need to buy two more drives (one backs up the other). Keeping track of it all is getting to be a nightmare. This image used 6 10 minute luminosity images and 4 10 minute images in each color; red, green and blue. To get as deep as possible (this goes to at least 22nd magnitude) I combined all 18 images to make one synthetic luminosity image. I\'ve since learned that actually hurts the depth of the image some but haven\'t gotten around to correcting my error.

Current articles on this galaxy say it consists of mostly dark matter. This is stuff that can\'t be seen, doesn\'t interact with ordinary matter except by its gravity and is still a mystery. We know it exists as otherwise, our galaxy would spin far slower, galaxy clusters would fly apart as would this particular galaxy. It takes a huge amount of dark matter to hold it together. Motions of even the stars near the edge show they are strongly bound to the galaxy. This can only be if most of this galaxy is made up of this mysterious dark matter. So while this image appears nearly empty it is full of invisible mystery stuff.

You can read a bit more on it at:
http://spider.seds.org/spider/LG/dra_dw.html 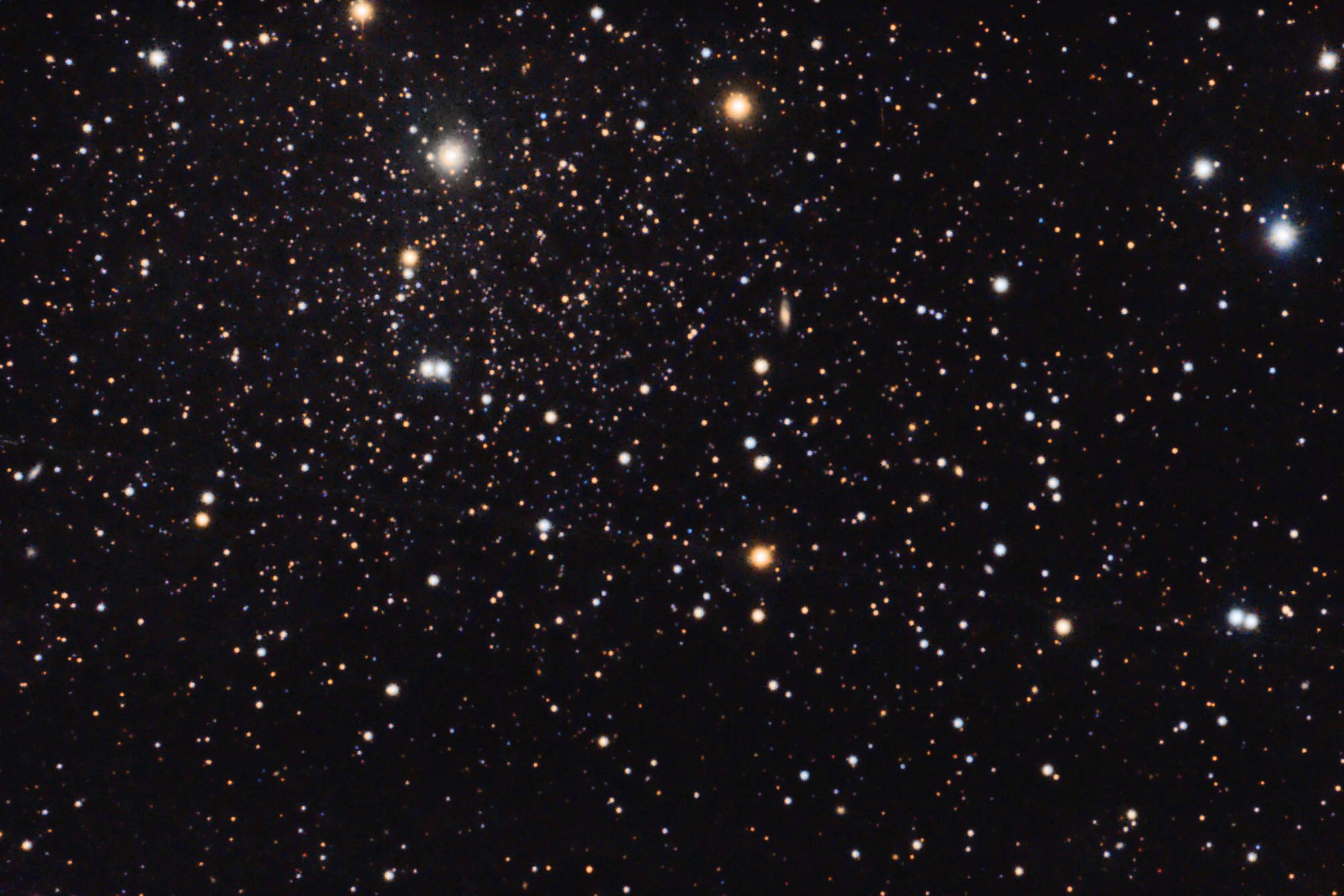