Do you believe in flying saucers? FGC 1953 aka UGC 10043 certainly is a flying saucer-like galaxy. Appropriate number as I recall a lot of SciFi UFO movies in 1953: War of the Worlds and It Came from Outer Space as well as lesser-known Phantom from Space and Invaders from Mars (almost a cult classic today) as well as the silly Abbot and Costello go to Mars. Or the very forgettable Catwomen of the Moon except it used the same sets, props and costumes as the supposedly unrelated Project Moon Base (which came first?). Yes, I saw them all. It was the year I started building my first telescope as well. But back to the topic.

FGC 1953 is located in Serpens Caput about one hundred million light-years distant by redshift measurement. Other methods put it much further away averaging about 160 million light-years. In this case, I\'ll go with the redshift distance as there are several nearby galaxies with similar redshift. The lone note at NED says it has two companions to the east with the more distant being a dwarf. The nearer one is likely a true companion as its redshift is quite close to that of FGC 1953. But the \"dwarf\" lies some 3.4x further away by redshift so is not a dwarf at all being some 65,000 light-years in diameter, rather typical for a spiral. FGC 1953 is slightly larger at 70,000 light-years. Note it isn\'t a perfect flying saucer, the south ansa bends to the right while the northern one bends slightly left. It has been slightly warped, possibly by its real companion MCG +04-34-035, a low surface brightness mess of a galaxy. Was it normal before interacting with FGC 1953 or it unrelated? I found no opinions or discussion about this.

Normally an FGC galaxy has no real central bulge in order to meet the 7x length to thickness rule to make the catalog. In this case, however, the disk is so unusually thin its central bulge looks huge. Also, note it is somewhat oblong with its long axis at right angles to the disk. Or so it appears in my image. This seems strange though I\'ve seen this before, never this obvious however.

Also in the image is Hickson 77 to the east of FGC 1953. It is made up of two unrelated interacting pairs of galaxies. The northern two are interacting irregular galaxies about 100 million light-years from us while the southern pair are interacting S0 galaxies nearly a half million light-years distant. The southern member of the northern pair, HCG 077D, is made up mostly of several large, bright, blue star clusters in an ill-defined faint halo while its northern companion seems to have some hint of spiral organization. Hickson knew these two pairs were at these different distances when he included them in his catalog of small galaxy groups.

I\'ve identified all galaxies under a half million light-years distant and included their classification if shown at NED. More distant objects are labeled G for galaxy and Q for quasar. Quasars are so distant their light travel time is a poor indicator of distance so I\'ve included the redshift value (z) as well. A z value of 2 means it is moving away so fast the light has been stretched to three times its at rest value so all the light I\'ve picked up was originally deep ultraviolet light when it left the quasar. 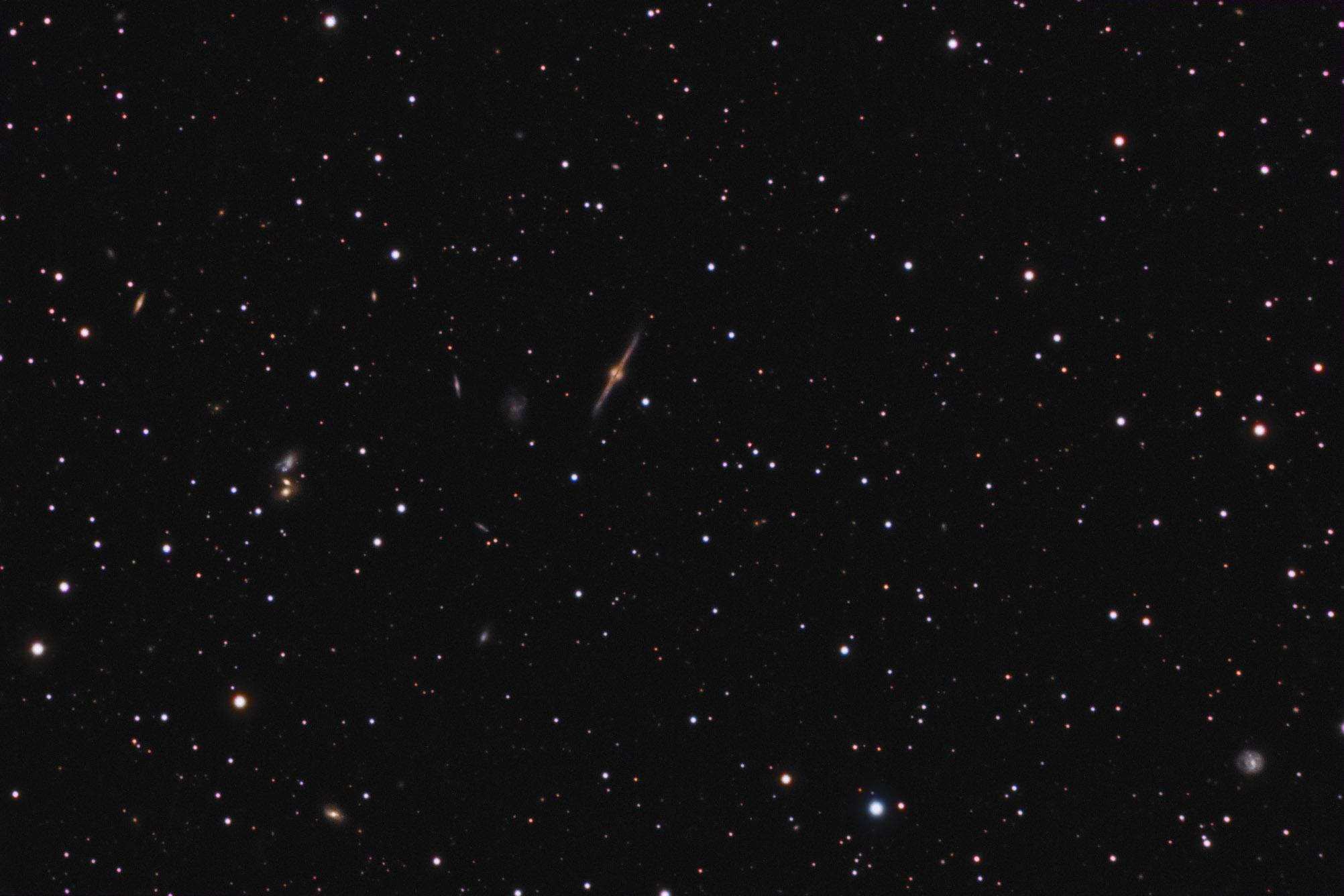 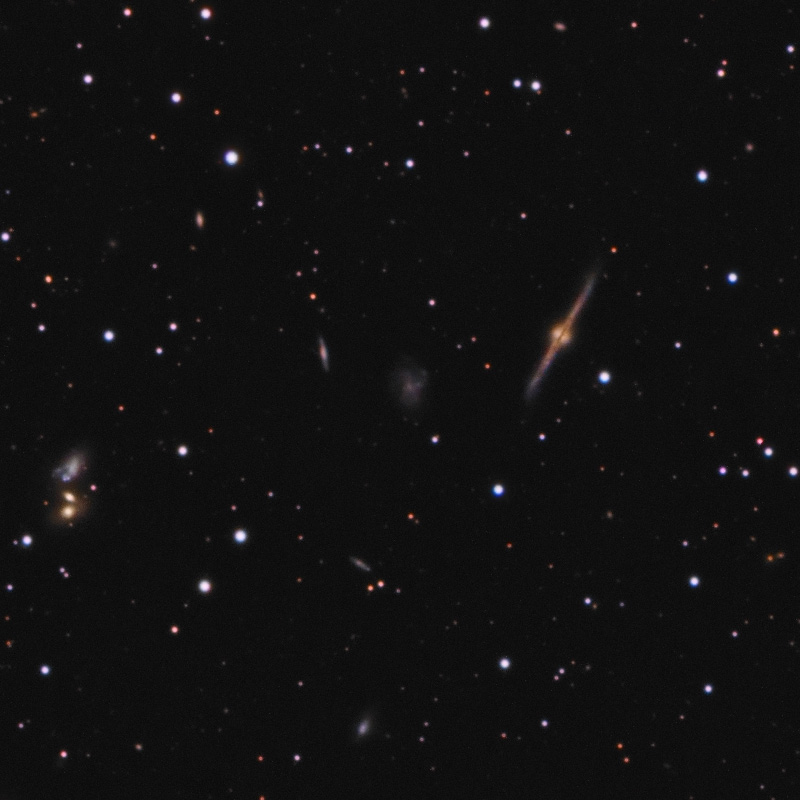 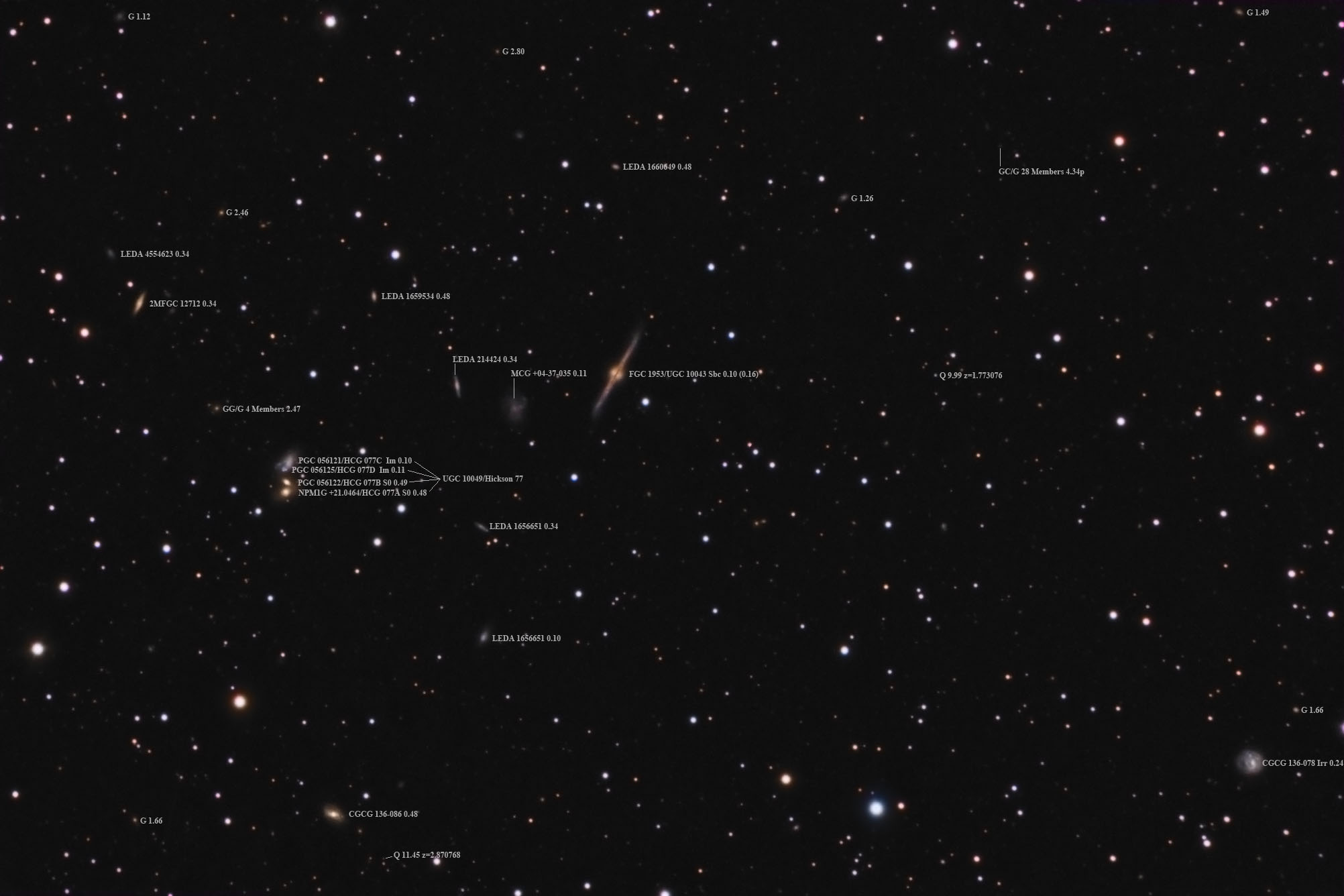