FGC 2004/UGC 10288 is a flat, edge on galaxy in eastern Serpens Caput about 100 million light-years distant. It is quite similar to the far more famous FGC 1471/NGC 4565, just much further away. Both are in the FGC and have near star-like cores and a great dust lane. For this reason, it has been on my to-do list for some time but being just below the celestial equator I never seemed to have the seeing needed for it until last May. When I went to research it later in the fall I was surprised to find it much in the news from the fall of 2013. Seems it was discovered to have a radio jet but only recently was that jet tied to a background galaxy nearly 7 billion light-years distant. Even more surprising is I picked up this galaxy in my image. It is marked in the annotated image. These two links cover this quite well.
http://www.jpl.nasa.gov/news/news.php?release=2013-334
http://news.umanitoba.ca/new-galaxy-discovered-hiding-behind-another/

The annotated image lists all objects with a redshift in NED. The radio galaxy is only listed as a radio source at NED with no distance. The position is the center of the radio emission which, since these are jets doesn\'t quite match (by about 2\") the position of the optical galaxy creating the jets. I list by catalog name those that have a name other than just its position. That forced me to use some very unusual catalogs as few of the objects in the image are in the normal catalogs I use for identification. I avoid positional names as they are very long and clutter the annotated image. But these obscure catalogs have nearly as long of a designation. I\'m thinking of just labeling such galaxies as G for galaxy or Q for quasar etc. rather than cluttering the image with such long names. What would you like?

Near the bottom of the annotated image is a point source labeled G? with a distance of 12.06 billion light-years. Since there\'s no galaxy I\'d see at such a distance it has to be either a quasar or the photographic redshift is very wrong. The object is really two but only looks slightly elongated in my image. Sloan\'s image shows an orange starlike object to the left and slightly below a blue near starlike galaxy. The position matches that of the orange starlike object, not the bluer object. I\'m wondering if the combination has thrown the photographic redshift measurement way off and this is just an orange star superimposed on a distant blue galaxy only a billion or two light-years away. I couldn\'t find anything more on it unfortunately.

I ran into dawn when taking the color frames. Saving green for last, since it is least important, I ran too far into dawn and one green had to be thrown out. Dawn created some nasty color gradients I had to remove but think I didn\'t distort the color data doing so. I did retake the color data two days later but its quality was worse even though taken in darker skies. I didn\'t use it. 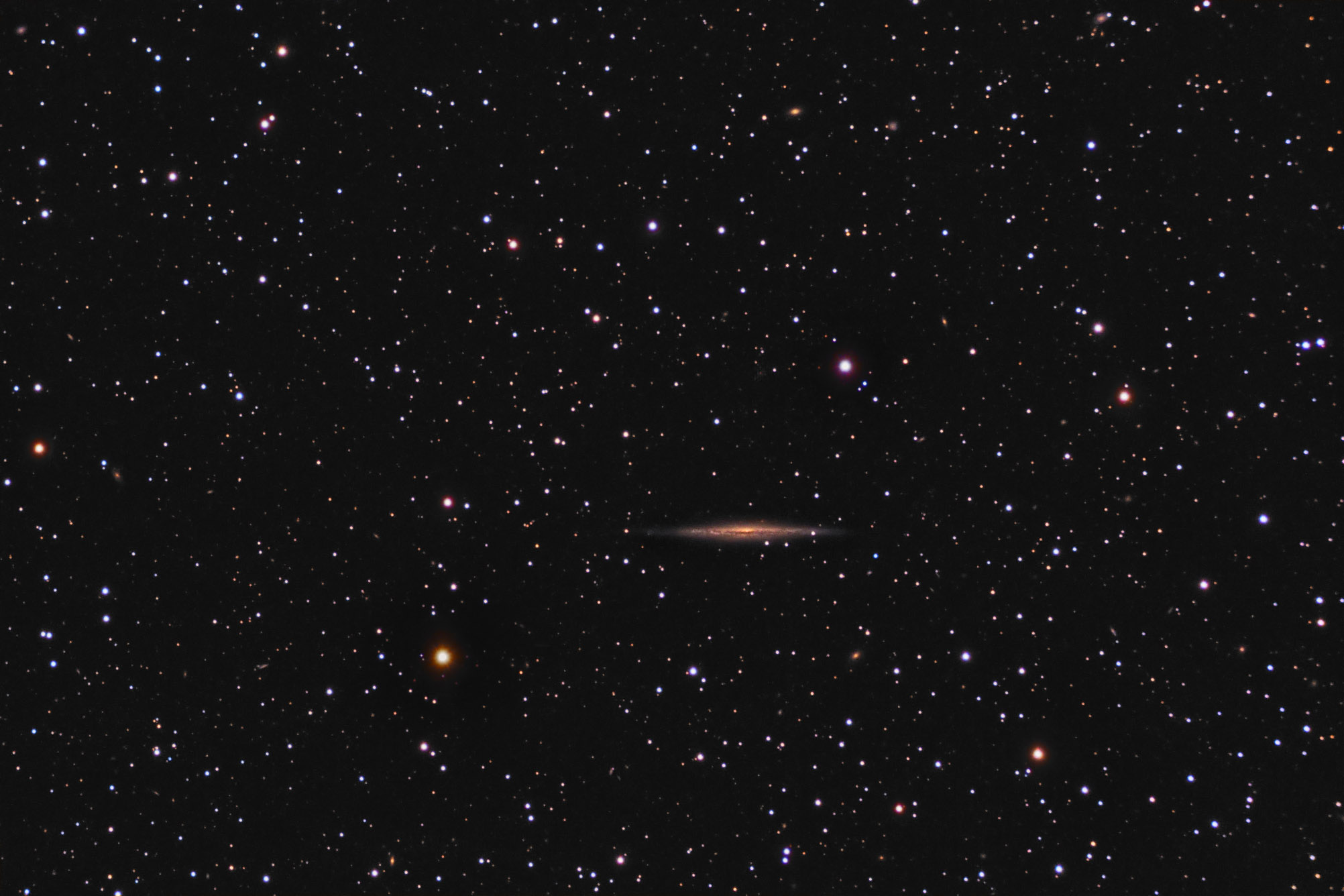 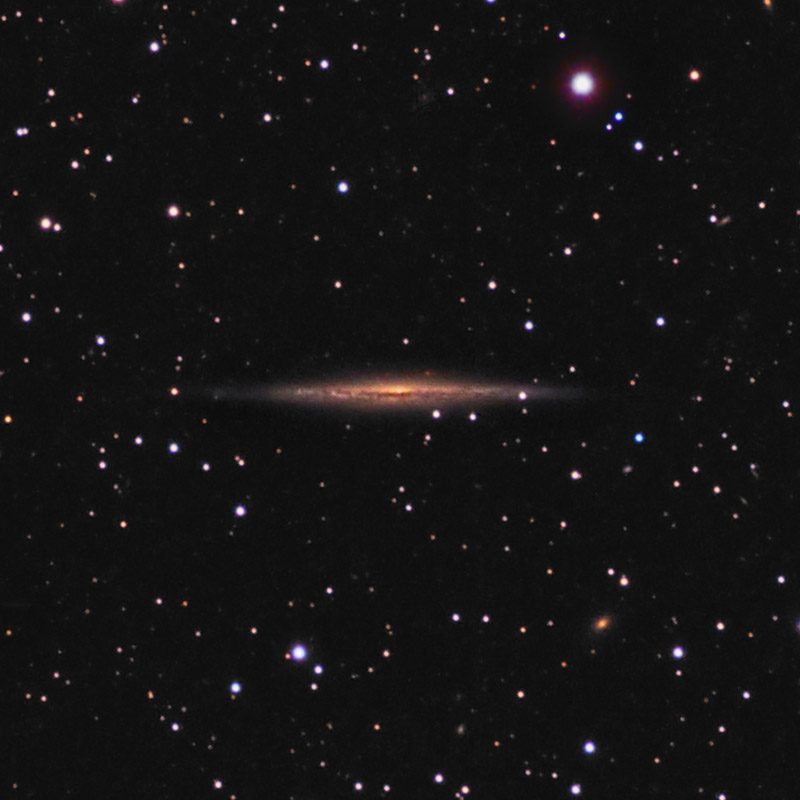 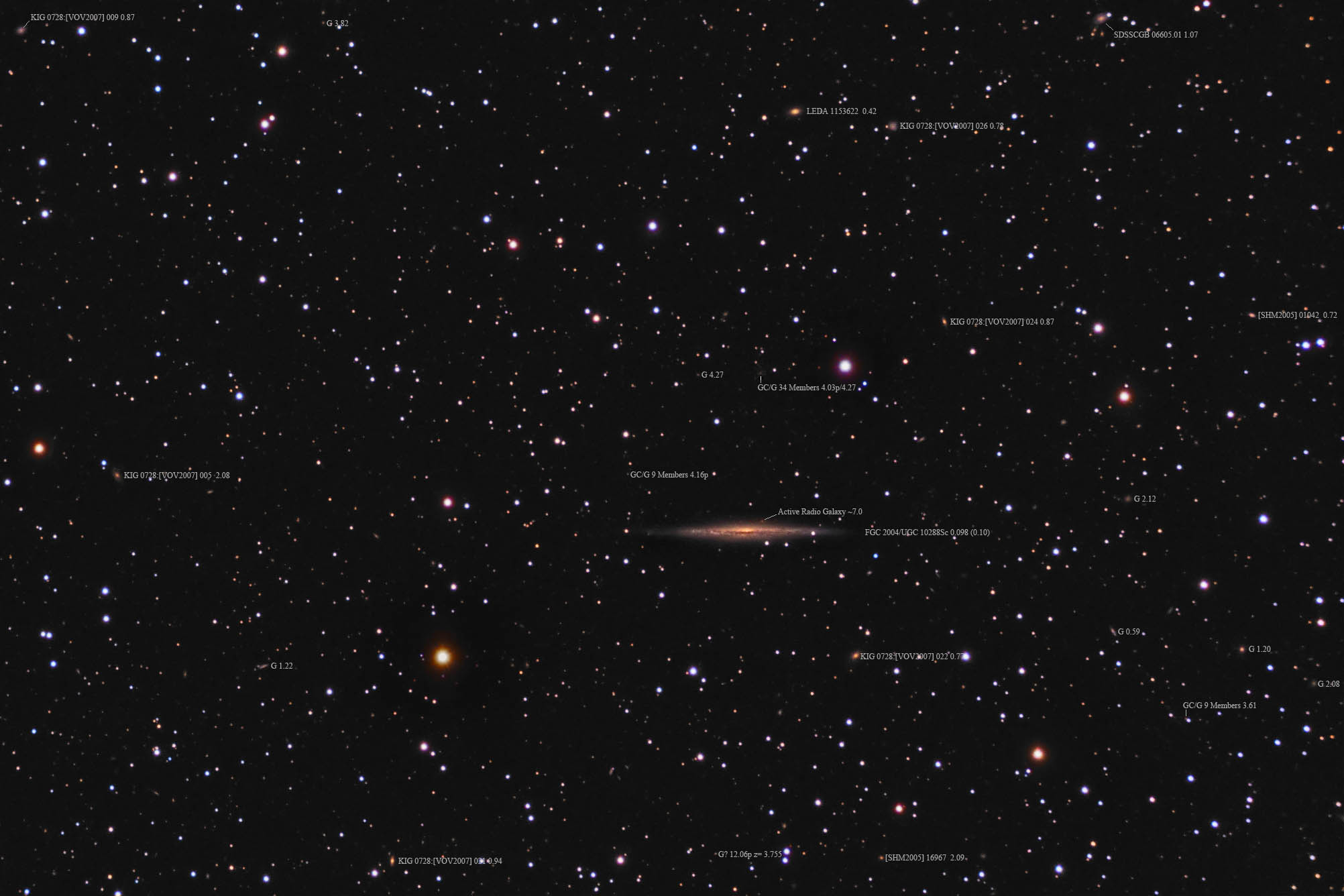