UZC J211152.4+111637 was my primary target so I\'ll start there. It drew my attention due to the very weird dust lane it contains. It doesn\'t make any sense nor could I find anyone who studied this oddity. Notes at the UGC say: \"Peculiar E or S0?; Extended asymmetric envelope; Condensation north-preceding center may be a companion galaxy.\" NED indicates the MCG also indicates possible interaction. I have no idea what they see to the northwest that they consider a possible companion galaxy. I see nothing in that direction. While a note calls it peculiar and E or S0 the UGC itself makes no attempt to classify it. Nor does NED. It does appear possible that it is the result of an incomplete merger of a spiral (NE-SW axis) and an elongated elliptical (N to S axis). That could explain the warped, off-center dust lane.

My other object was the flat galaxy FGC 261A/UGC 11696 which NED does classify as Sdm? Again I found nothing much on it. In case you are wondering FGC 261 is about 60 degrees east of FGC 261A. I\'d have thought to find them close, maybe even interacting, not a sixth of the sky apart. They do have about the same declination, however.

The third galaxy UGC 11700 is a very rectangular galaxy. The western arm is thin and very straight. The entire galaxy seems red for a spiral. NED classes it as SBb, a barred spiral which seems right to me. Besides the two arms coming from the bar there are arm segments that seem to start from these two arms. Looks to be interesting if we could get a closer view.

All of these as well as several others form a loose group of galaxies with a distance of a bit over 200 million light-years. They are located in northern Equuleus east of M15. This is the smallest constellation in northern skies. It\'s possible that UZC J211152.4+111637, UGC 11700 and CGCG 426-015 have their odd shapes due to interaction sometime in the past.

In the annotated image, if the galaxy appeared to be part of the group I listed it by name (shortest I could find to save space) and distance rounded to 2 decimal places based on redshift using 5 year WMAP data. One galaxy SDSS J211130.09+111843.0 had no distance but did appear as a member of the group. Look at it in the full image (less compression than the annotated image) and you can see it has a bright spiral center with huge faint arms much further out. These may also indicate interaction with one or more other group members in the past.

The background appears a bit uneven and streaked NE to SW. I see this on the Sloan survey plates as well. I think it due to faint IFN in the area. One streak seems to follow the angle of UZC J211152.4+111637 to the southwest. At first, I wondered if it was some sort of superplume but IFN, which is known in the M15 area, seems a far better explanation. 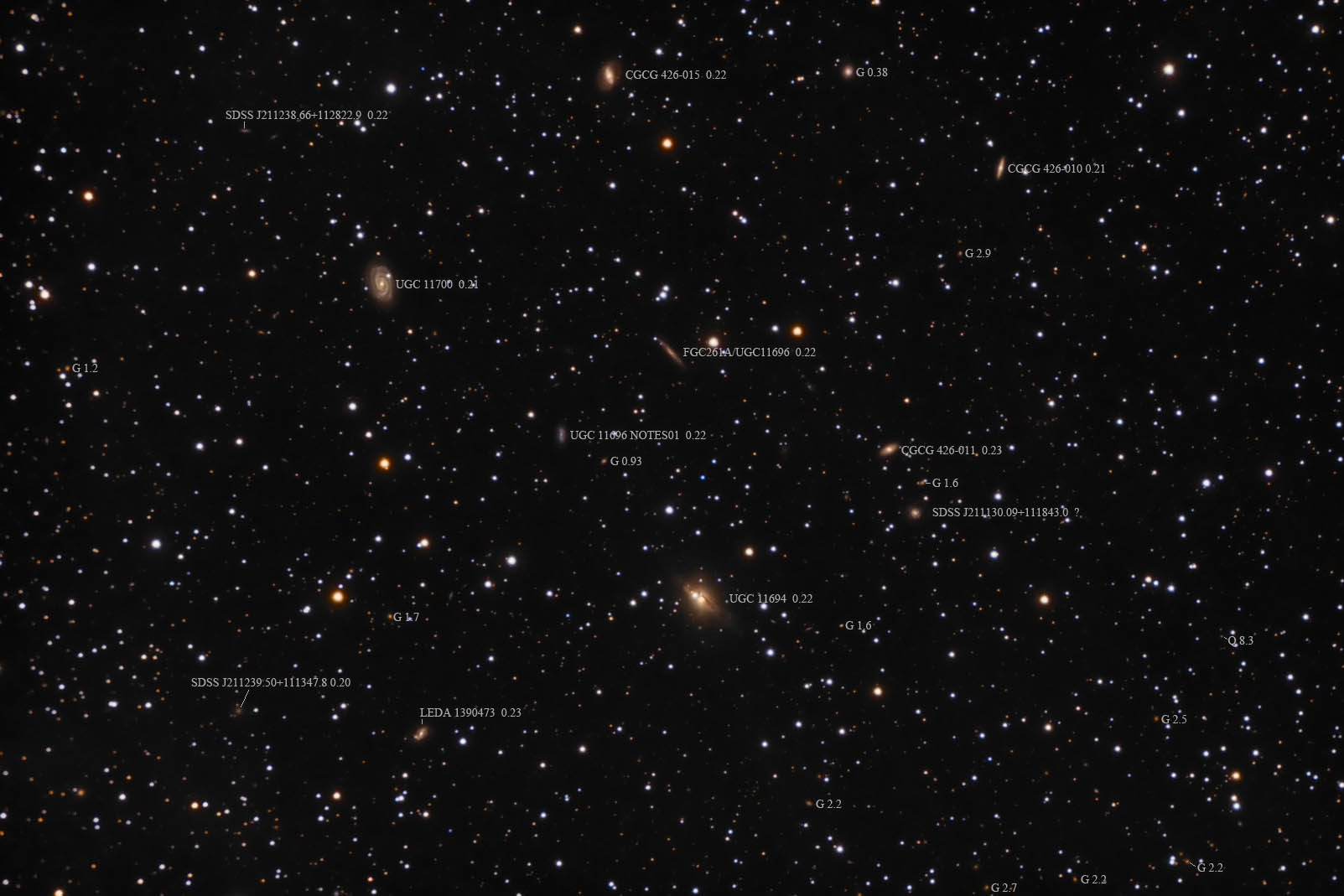 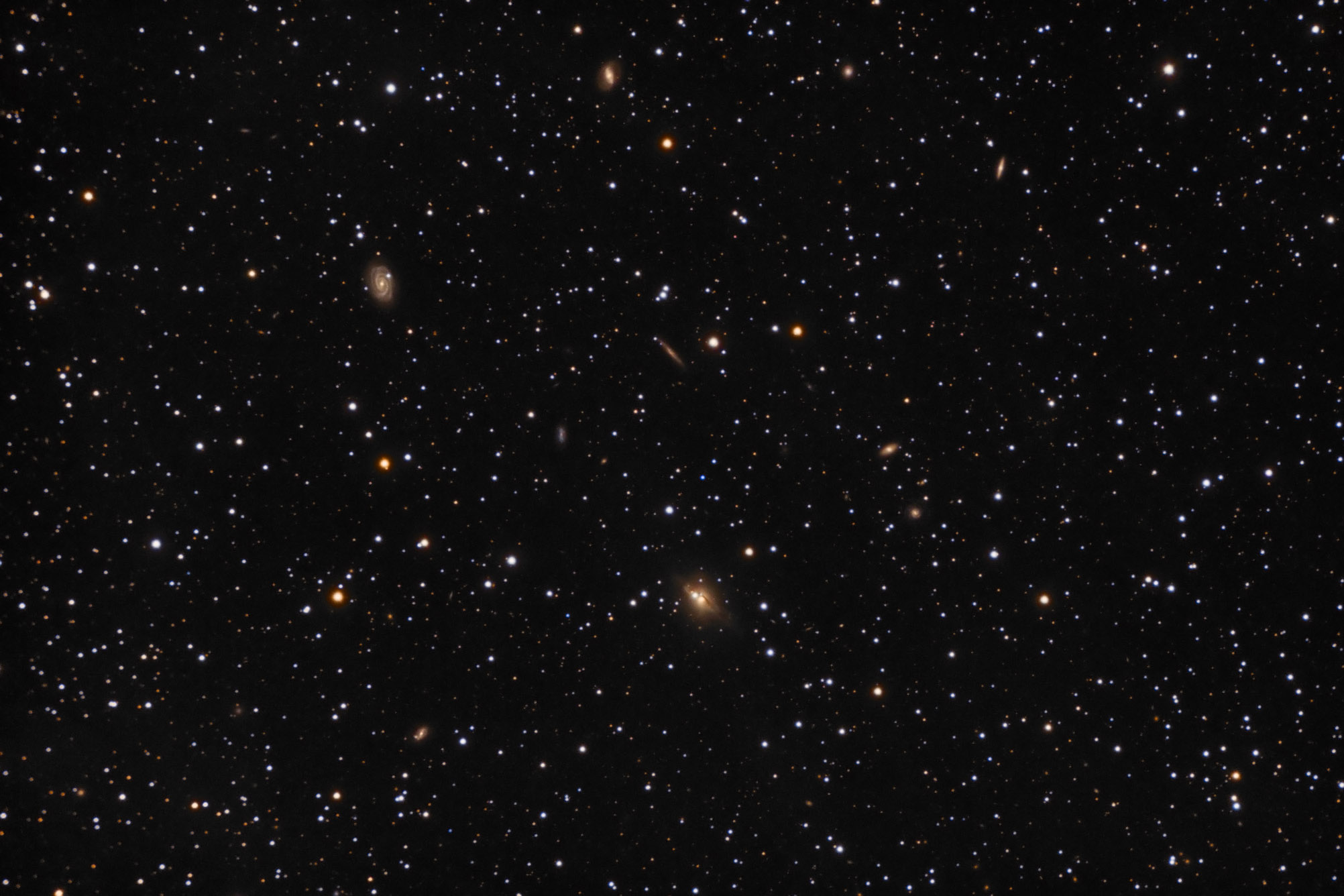 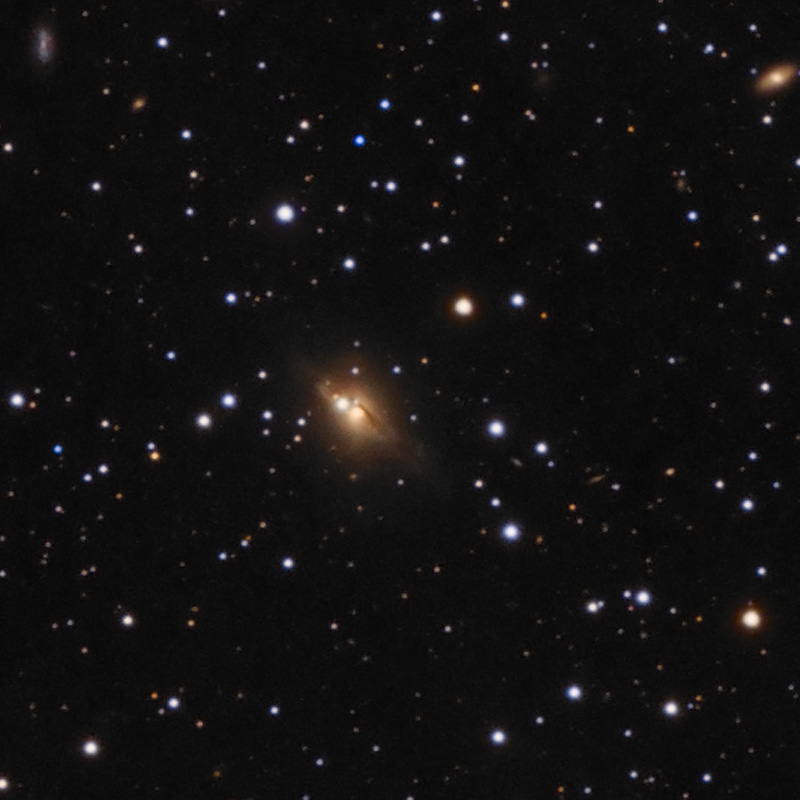