FGC 693/UGC 4133 and UGC 4134 are a pair of overlapping galaxies in northwestern Lynx about 400 to 420 million light-years distant. The pair is known as KPG 151 (Karachentsev Isolated Pairs of Galaxies Catalogue). A type 1a supernova was seen in FGC 693 just above its core. This led to many different distance determinations depending on how much dust is assumed between us and the supernova both in our galaxy and especially in the host galaxy as it is seen nearly edge on making it hard to know how deep in the galaxy the supernova was. Redshift puts it at just under 420 million light-years but the distances based on the supernova range from 300 to 670 million light-years. They average to 420 million which matches the redshift. The galaxy is classified as Sc. If it appears large for its distance that\'s because it is a huge spiral. I measure it at 328,000 light-years across! While its size is rather obvious in my image the published size is somewhat smaller than seen in my image. Using the published size it is still 284,000 light-years across. Note too that the southern ansa appears to be bent to the right (west) though the upper ansa seems normal. I don\'t know if this is an illusion due to it overlapping UGC 4134 but it sure looks real to me.

The companion NGC 4134 is listed as SBb, a barred spiral. Its redshift puts it at 410 million light-years. I found no other distance estimate for it. While the two overlap it is hard to tell which in front of the other. It appears possible that FGC 693 is in front which is contrary to the redshift data though fits some non-redshift distances such as the median rather than mean value of the various type 1a distances of 400 million light-years. UGC 4134 is another very large spiral. Its edges are very clear making a size determination rather easy at 180,000 light-years with a diameter of almost exactly 1.5 minutes. But the published size is only 1 minute of arc giving a diameter of only 120,000 light-years. I can\'t fathom how that 1 minute size was determined.

Both galaxies are surprisingly red. This is noted in a paper on photometry of galaxy pairs in the KPG catalog. Until I found that paper ( http://www.aanda.org/articles/aa/pdf/2001/43/aa1209.pdf ) I suspected something was wrong with my color balance even though the stars appeared correct.

One of these other galaxies is in the upper left corner, NGC 2488. It too is at 400 million light-years and listed in both the LDCE and HDCE as #9 and #8 respectively. It is an S0-: galaxy that was discovered by William Herschel on March 18, 1790. It is not in either of the Herschel 400 observing programs. At 12th magnitude, it would seem a candidate for one of them. If you thought the two spirals were large this one is really big. In this case, the edges are very indistinct. In my image, there\'s a faint outer halo that has no color as the night was too poor to pick up color in something that faint. Still, the outer region is quite obvious. Including it and using its distance as 400 million light-years I get a diameter of 440,000 light-years using the edge as seen in the FITS files. Using the portion that survived the color processing it is still 400,000 light-years across. But if the orange portion only is used then it is 250,000 light years across. But again the published size is way smaller than its obvious size in my image. That gives a diameter of only 170,000 light-years. I can\'t explain why published sizes for these galaxies is so small. Maybe they were made from old plates of poor depth. That\'s only a guess. Though even the POSS plates show these larger than their published sizes.

This field is poorly covered by both NED and SIMBAD. Many galaxies were in one or the other but not both. Others were in neither. One low surface brightness galaxy is marked in the annotated image with a question mark being in neither catalog. Most had no distance data unless they were part of the galaxies in the group at about 400 million light-years. The only exception is in the lower left corner where a galaxy at over 900 million light-years was listed from the PC ((Palomar) PFUEI CCD) catalog. I did annotate what few galaxies that had catalog names other than just their coordinates even if they had no distance data.

BTW, PFUEI stands for Prime Focus Universal Extragalactic Instrument on the Palomar 5 meter telescope. Did someone stay up all night dreaming up an acronym that is phonetically \"phooey\"? The description reads: \"An 800x800 Texas Instruments CCD served as the detector; its 15 micron pixels coupled to the reimaging optics produced an image scale of 0.415\" and a field size of ~ 30 square arcminutes.\" That\'s a field of just about 5.5 arcminutes on a side so quite small. That also works out to be about f/1.5. The \"reimaging optics\" work like a 0.4545 compressor it would seem.

Weather continues to plague my imaging. I managed the luminance data on a rather warm February night that had fair seeing (only a bit below average) but transparency fell rapidly. The last luminance frame is only about half the density of the first. The color data was useless that night. Two nights later we had good transparency but horrid seeing. While I took some luminance data the seeing was so bad including it degraded the image. But the color data, while very fuzzy was quite good so was used for this image. Problem is it was about 20C colder that night. This changes my image scale greatly so the color data didn\'t quite fit the luminance. I had to match the luminance to the color data to be sure everything had color data. This didn\'t change my image scale significantly as when you spread the 20 pixel difference over 4008 pixels it isn\'t significant. 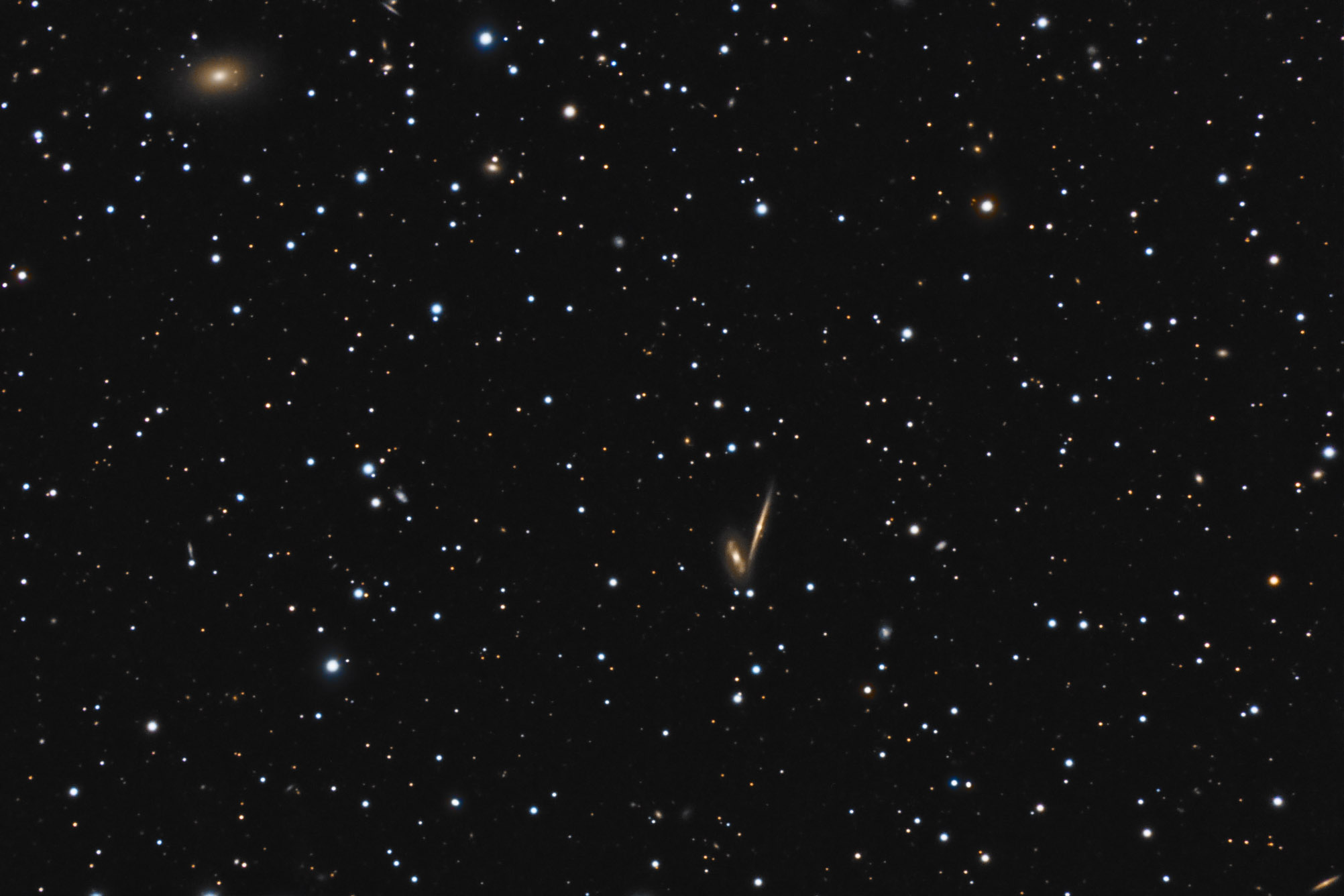 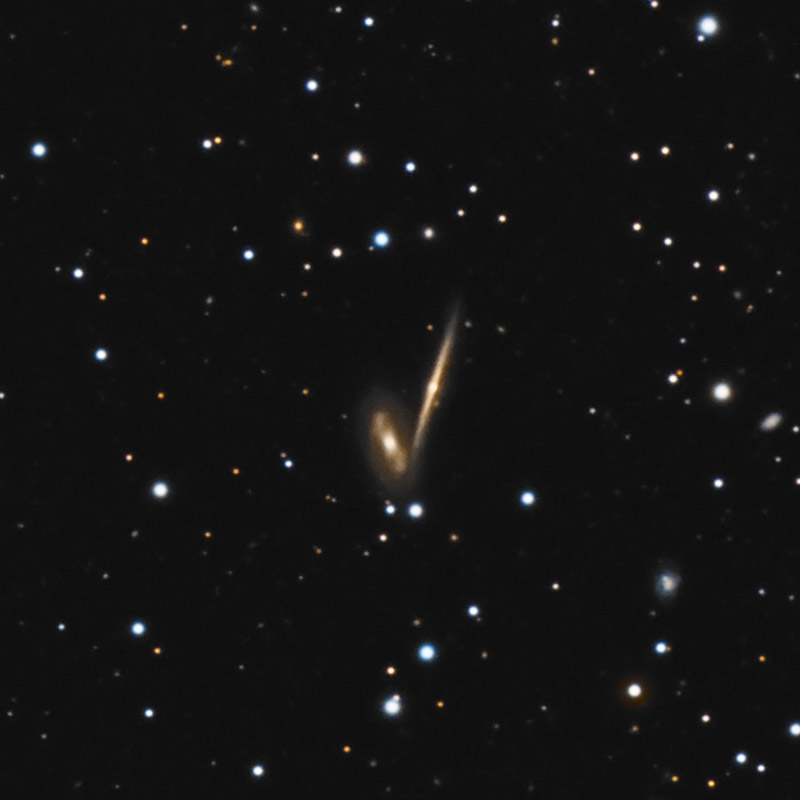 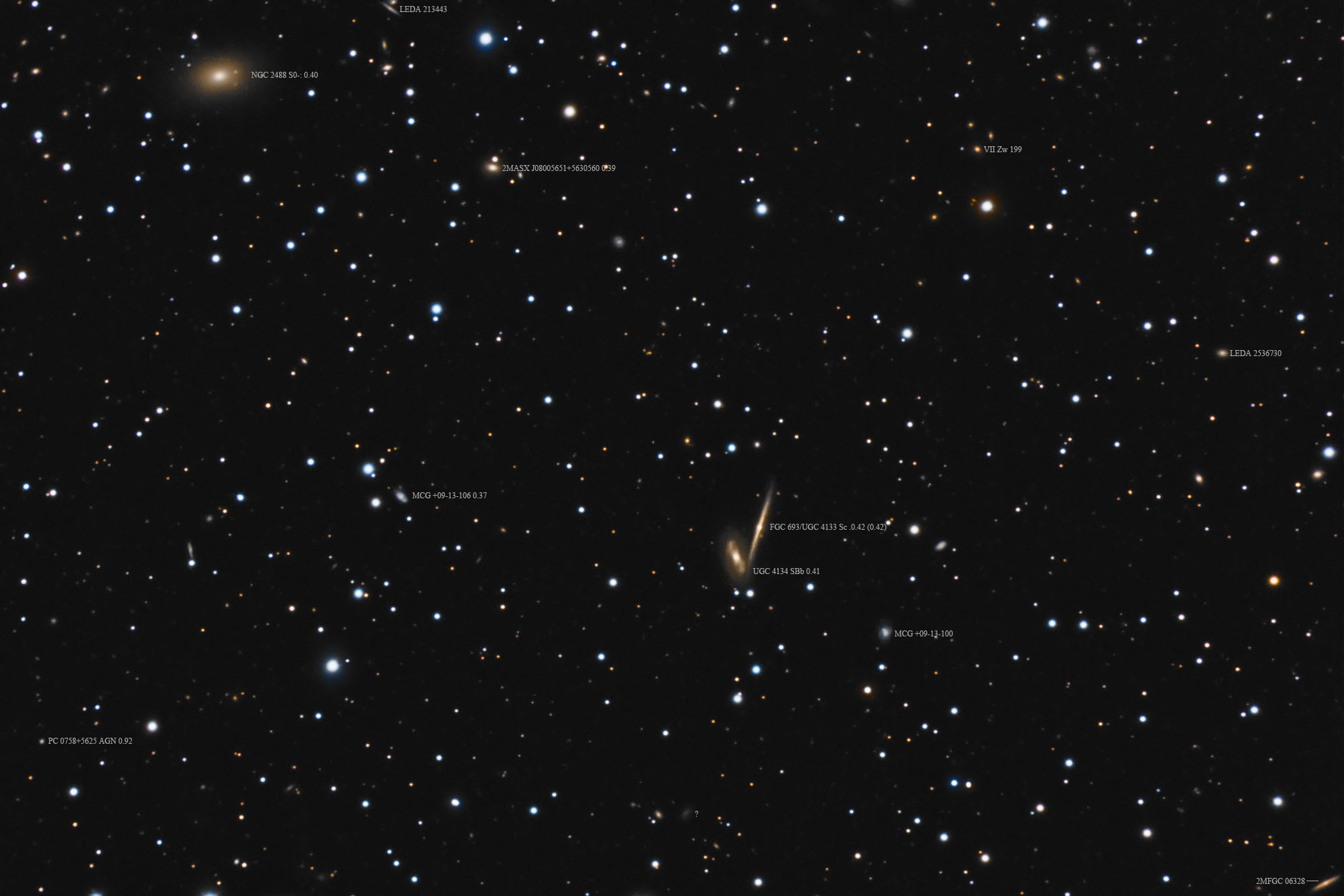