Asteroid (3122) Florence came closer to the earth on September 1, 2017 than any asteroid its size or larger has since we\'ve been keeping records of such things. It is an Amor class asteroid. That\'s one with an orbit that is always outside that of the earth with its closest approach to the sun being less than 1.3 AU but not less than 1 or 1.017 AU. Some disagreement about 1 or 1.017. Its perihelion distance is 1.02 AU so can\'t quite hit us. But since it goes out in the area of Jupiter that could change in the distant future if Jupiter\'s gravity changes the orbit just the right (or is it wrong?) way.

It was discovered by Shelte (Bobby) Bus at Siding Spring Observatory (Australia) on March 2, 1981. It was named for Florence Nightingale. While its closest passage was August 1 (early morning US time) I made this a day earlier. The difference is small as it was only 2% further away and moving about 4% slower. Moon was closer to it and my skies hit by heavy smoke from British Columbia fires when closest. I\'d planned to take it over several nights hoping the weather would be good for one. Seeing was awful when I took it a day before closest approach with it rather low in my skies where I need great seeing. Also, it was quite windy with winds of over 30 mph. Often I can survive such wind but not this night. The one two punch of wind and poor seeing had an odd effect on the star trails. Both moved them around over the one minute of each exposure. The result is that in the time lapse the star trails wave about like crazy. Wish I could try again but that wasn\'t impossible. It is getting higher each night but the moon is getting closer and brighter. Last two nights have been foggy and rainy respectively. A nearly full moon lit up the sky greatly. This will have to do for now. It will still be around when the moon gets far enough away and ebbs some so I may try again though it will be moving slower.

The bright star it passes by is HD 201567 a magnitude 6.3 KIII star. The asteroid is about magnitude 8.7 in my animation. Comparison to trailing stars makes an accurate measurement difficult. I was getting 8.5 when compared to moving stars. This would be too bright. My crude compensation says 8.7 which agrees well with other estimates. Each frame is a 1 minute exposure tracking the asteroid. Due to bad seeing and wind, it is bloated but the bloat was rather consistent on each frame. There are thirty frames, one minute frames. Due to the time needed to download each frame (about 4 seconds) the animation covers about 32 minutes of time. The frames were taken at 1.5\" per pixel but reduced from that a bit for the animation. No alignment was used. The mount held dead on the asteroid the entire time. But it does quiver a bit, same as the stars due to seeing.

Radar observations of it, resolved two moons according to this Sky and Telescope Magazine link http://www.skyandtelescope.com/astronomy-news/asteroid-florence-has-two-moons/. Both appear too faint and small to see visually.

I had some email from the fringe predicting all sorts of disaster to earth. Some telling me to repent before it is too late. One has written me several times about other \"end of the earth\" passages by comets or asteroids. This time he was sure he was right. I\'m sure I\'ll hear from him again in October when one, smaller but still very dangerous if it hit, passes by much closer than Florence did. I expect he will be sure to be right yet again. A 100% failure rate doesn\'t discourage these folk.

I was in a quandary how to present this animation. An animated GIF was over 2 meg in size so too big. I\'ve been told some browsers can\'t easily view the WMV file I\'ve used in the past. When I converted it to an MP4 file I couldn\'t make it repeat. Club member Mark Dahmke to the rescue. He found a way to turn it into a web page that did repeat. Rather simple but beyond my limited abilities. I believe any modern browser that supports HTML5 (now used by YouTube and others) can handle this. Let me know if you have problems. 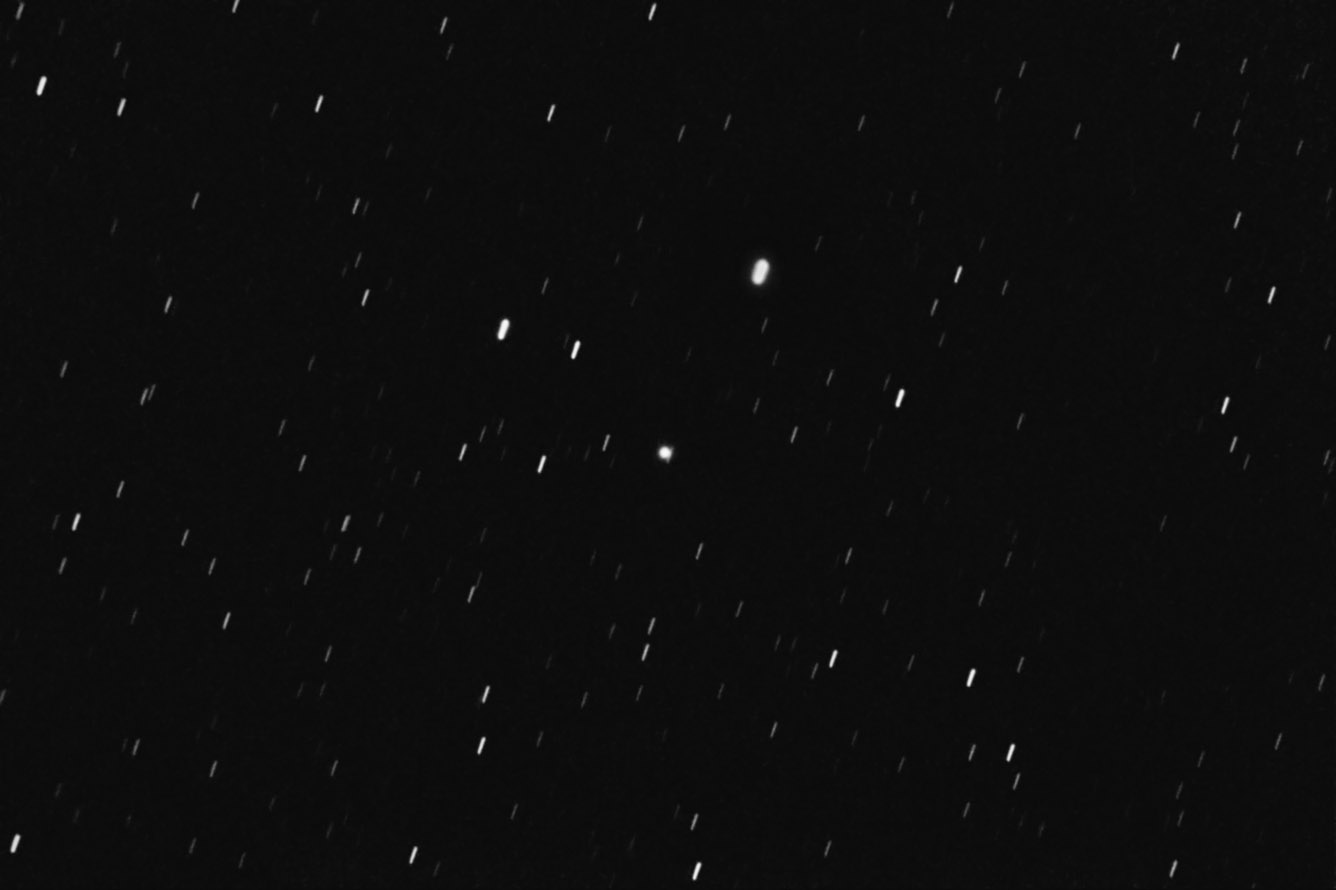