As you\'ve probably noticed I like imaging things few others do. This one certainly falls into that category. Not only that it was just discovered last year. It appears unique in the universe. At least we know of nothing like it anyplace in the universe. Or so we thought when I wrote this -- I\'ve since imaged two others. It is known simply as Hanny\'s Voorwerp. If you put voorwerp into a Dutch English dictionary it will tell you it means \"object\". But to those studying this voorwerp a more correct translation would be \"What the #$(* is this?\". Also, who is Hanny? The story is long so those that already know it can skip to the image. The rest of you might find the saga rather interesting.

First I need to explain Galaxy Zoo. You have noticed how many uncataloged galaxies lurk in my images. Galaxy Zoo is part of a project to remedy this using the help of anyone interested in astronomy. It is attempting to classify these faint fuzzies. They are sending out images of them to folks like you to determine if they are an elliptical, spiral or irregular galaxy and if spiral, do they spin clockwise or counterclockwise. The latter had some surprises though more to do with psychology than galaxies. The project has expanded greatly since I first wrote this. Anyway, Hanny is Hanny van Arkel a preschool teacher in the Netherlands. One of the \"galaxies\" selected for her to categorize was this one. These are sent to several and only when all or most agree is the category accepted. In this case, only Hanny thought something odd. She posted a note to the galaxy zoo forum asking others to look at her mystery. All told her to contact the bigwigs running the project but one of the moderators jumped in and soon things got really interesting. Only recently has a possible solution to this mystery been proposed that seems possible.

But I need to go into why this was such a mystery. First off Hanny\'s Voorwerp is bright green. This is a rare color in the universe. Stars can\'t be green due to the way our eyes see color and how quantum physics works. Ionized oxygen can as can ionized hydrogen in one wavelength but normally if that wavelength is present the red one is even more obvious and we see the object as pink not green. Her voorwerp is the size of a galaxy yet contains only dust and gas, no stars can be found in it even at infrared wavelengths which should turn up stars in thick dust and gas. It is the only galaxy sized intergalactic cloud of ionized gas known. But where do you get the energy to ionize it? It is estimated you\'d need the energy of billions of stars far hotter than our sun to do the job and they\'d have to be right at its surface. Here you have something giving off as much energy as an entire galaxy but at odd wavelengths that turn it green that contains NO energy source. YIKES. This is magic, not science.

First thought was that the nearby galaxy IC 2497 may have had its black hole eat something huge about 100,000 years ago and that turned it super bright. That light then hit this huge gas cloud and due to geometry that reflected light is just now reaching us. Such light echoes are known but this one is very bright and again, the illuminating light couldn\'t be green. Nor would it likely have the ultraviolet energy needed to ionize it like we see here.

So why is it green. It turns out most of the light it emits is OIII and H-beta emission but no Halpha to speak of. Normal ultraviolet light can\'t make strong Hbeta and weak Halpha. Physics just doesn\'t allow this. The current best guess is that a few hundred thousand years ago the galaxy passed through a small cluster of galaxies out of my image frame. In doing so it was stripped of nearly all its dust and gas which then formed as a galaxy sized cloud far outside the galaxy. In the meanwhile star orbits in the galaxy were shaken up and some fell into the black hole that is thought to lurk in the center of most galaxies. We can\'t see it as it is deep inside the galaxy. Radio telescope data shows an intense beam of radiation (high-energy particles not light) is being beamed from the center of the galaxy right toward Hanny\'s Voorwerp. Also, these scopes show a far larger cloud of hydrogen gas of which Hanny\'s Voorwerp is just a small part, the part this particle beam hits. A beam of high-energy particles can create this green cloud if its composition is right as apparently, this one is. But only the side of the cloud facing the beam is lit. Most are shielded by the glowing gas. We see only the parts where the cloud is thin enough that we can see the lit portion. This explains the light and dark regions we see. As a side note, Hanny was invited to the radio observatories that may have solved the mystery to participate in the release of their research.

A lot more work needs to be done to pin this all down, however. So stay tuned. It will also be interesting if the voorwerp changes its shape and brightness with time. As the particle beam is blocked by possible clouds still in the galaxy it could change rapidly much as the far smaller variable nebula in our galaxy such as McNeil\'s Nebula I featured a few updates back. Here are a couple links you might find interesting.
http://www.astr.ua.edu/keel/research/voorwerp.html
http://www.universetoday.com/2008/11/25/hannys-voorwerp-revealed/

The photo with the second link was taken with the William Herschel Telescope which is far larger than my house and one of the worlds major scopes. You can compare it to my efforts.

Finally, two years later Hubble investigates this mystery cloud of green gas near IC 2497. It turns out to be OIII emission from gas left over when the IC 2497 tore apart a passing galaxy. The cloud is far larger than seen in visual light. The interaction fed the galaxy\'s black hole. This, in turn, lit up the black hole, much of the light being blocked by infalling dust and debris. The high-energy UV light that did escape in one area lit up a small part of the cloud causing the OIII to glow its green color. I see no explanation of why H alpha emission, normally seen when OIII is present, is not seen in this case.

The black hole is now \"sleeping\" and no longer emitting much light. But since the path from the cloud to us is hundreds of thousands of light-years longer than the direct path from the black hole to us we are seeing a light echo from the black hole. Same as we hear a sound echo long after the source of the sound has stopped. The diagram of the path of the passing galaxy that left the debris cloud shows the arrow ending about the location of a small very blue galaxy immediately east (left) of the main galaxy seen on my image and Hubble\'s IR image. The latter shows it to be far larger as seen in IR light than in visual light. Is this the galaxy that left the material making up the green cloud? Again, the article doesn\'t seem to say. Though probably not. It\'s likely the galaxy that left the cloud is now part of IC 2497. In other words, they merged. This would explain the debris cloud mostly hiding the black hole that lit up a part of the cloud. Though the arrow in their diagram doesn\'t show this the text does indicate a merger is likely. I just wish the text was clearer on this.

IC 2797 is listed by NED at 660 million light years light travel time though I\'ve seen other estimates putting it at 800 million. The edge on galaxy in the full image is LEDA 090934 at 621 million light years per NED. I\'ve attached two versions. First is a 2x crop of the Voorwerp and the second the full frame.

In 2015 I imaged two more galaxies with green voorwerp like features. See my posts for NGC 5252, NGC 5972 and UGC 11185 for two more of these very rare objects. Here\'s an article on these two and the others discovered so far: http://www.skyandtelescope.com/astronomy-news/hubble-finds-ghosts-of-quasars-past-042215234/ 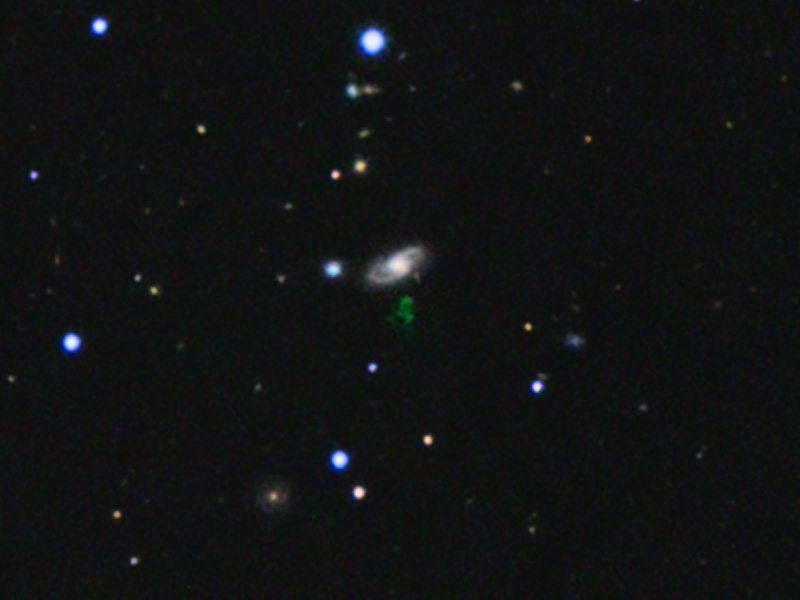 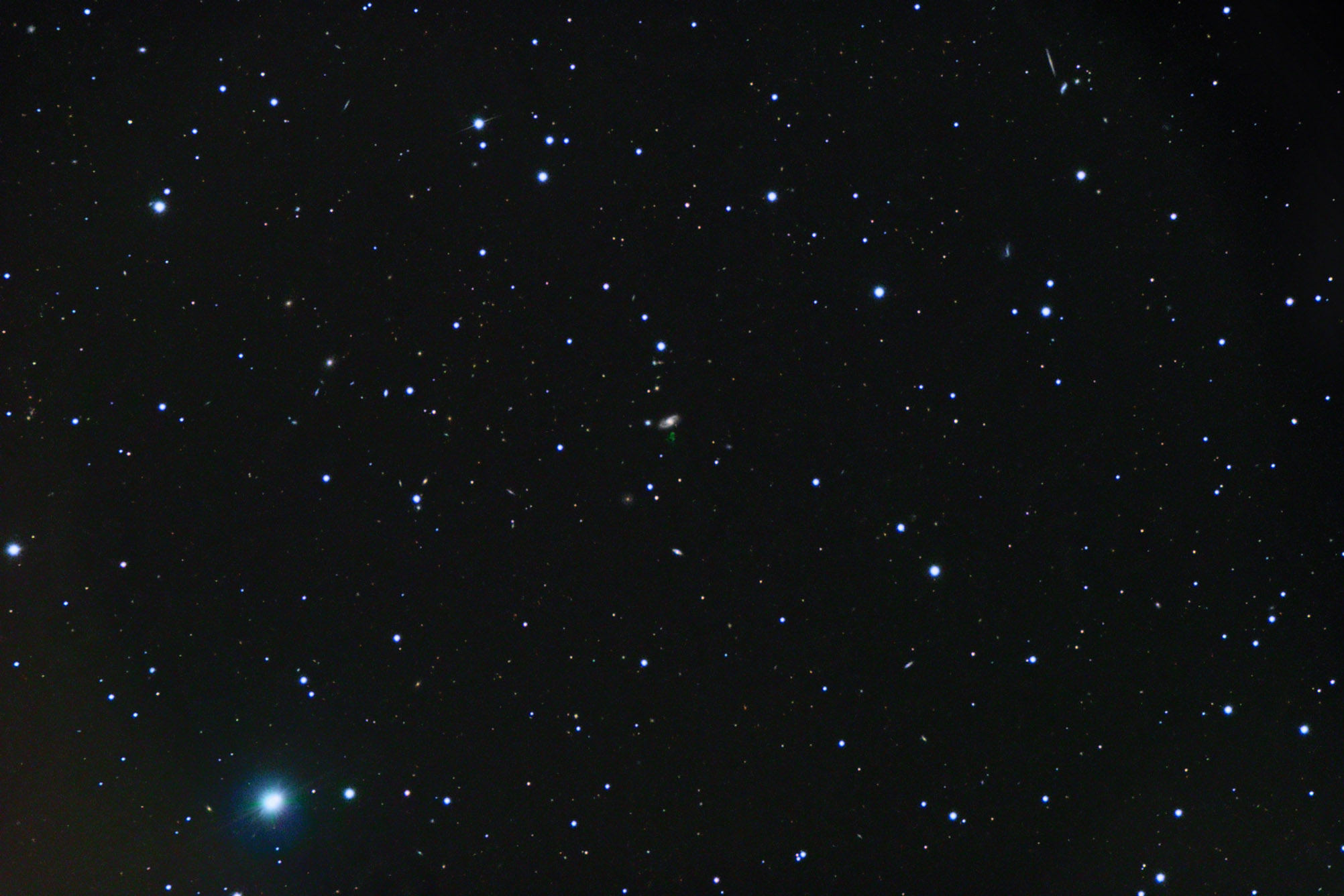